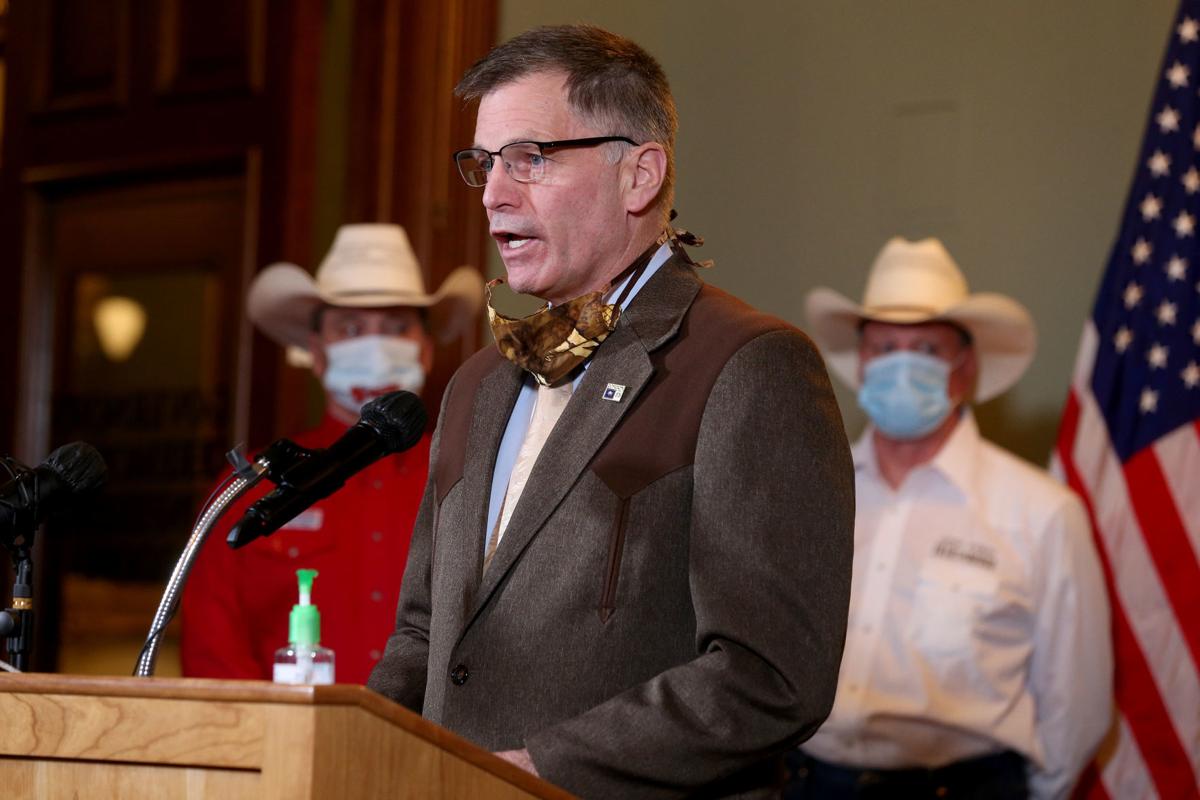 Wyoming Gov. Mark Gordon speaks during a news conference Wednesday, May 27, 2020, inside the Capitol in downtown Cheyenne. Gordon, while joined by rodeo leaders from across the state, announced the cancellation of the six largest rodeos in Wyoming due to COVID-19 concerns. Michael Cummo/Wyoming Tribune Eagle 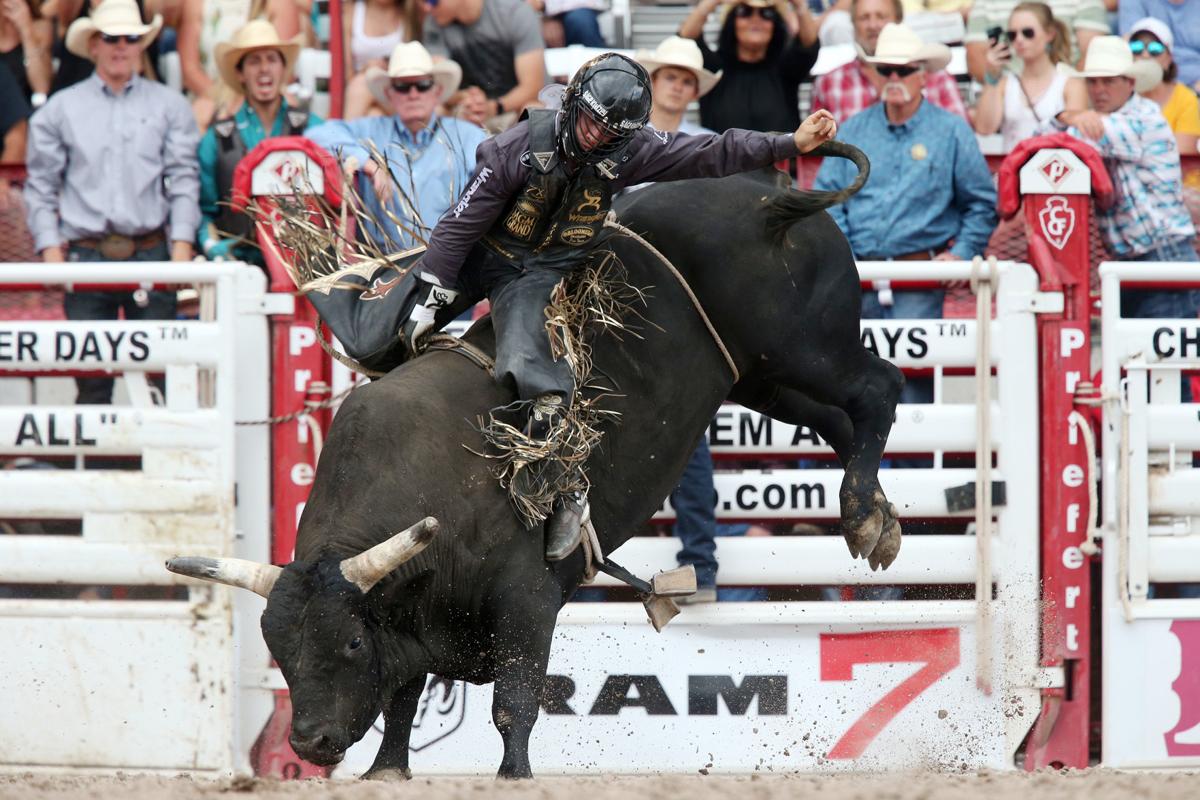 Wyoming Gov. Mark Gordon speaks during a news conference Wednesday, May 27, 2020, inside the Capitol in downtown Cheyenne. Gordon, while joined by rodeo leaders from across the state, announced the cancellation of the six largest rodeos in Wyoming due to COVID-19 concerns. Michael Cummo/Wyoming Tribune Eagle

CHEYENNE – The COVID-19 pandemic did what the Great Depression and World War II could not – cancel Cheyenne Frontier Days.

The organization announced Wednesday that the 124th “Daddy of ’em All” will not take place this July. The 10-day event, which bills itself as the “World’s Largest Outdoor Rodeo and Western Celebration,” was scheduled to start with slack events July 13.

The process of discussing how to proceed with those events started six weeks ago. It included rodeo committee officials from all six events and Gov. Mark Gordon, who made the announcement at a state Capitol news conference that featured the presence of representatives from each of the events. All were wearing cowboy hats and face coverings as they stood behind the governor.

The financial impact suffered by all six organizations and the state’s economy will be great, but it is necessary, said CFD Chief Executive Officer Tom Hirsig, who was chosen to speak on behalf of all six events.

“One of the worst things we could do was cause our state to go backward in the recovery process, to shut down businesses that just reopened because we caused another outbreak,” he said. “This would go entirely against our mission.”

The group discussed several ways to make their events happen this summer, and held off as long as they could, but there was no way to ensure their success, Gordon said.

“This coronavirus thing sucks, there are no two ways about it,” he said. “It runs on contact transmission and thrives in places where the likelihood of close contact is great.

“Some think it is no big deal, others are worried sick. The fact is, we want both groups to attend our rodeos and feel safe.”

Gordon became emotional as he talked about his ties to rodeo near the end of his remarks. Not only has Gordon competed in rodeo, some of his relatives were part of the Cowboys’ Turtle Association, which later became the Professional Rodeo Cowboys Association.

“All of us up here are committed to doing our best to make sure our local rodeos, jackpots, team ropings, state fair and county fairs can proceed,” Gordon said.

Many of them are among the at-risk population because of their advanced age or underlying health conditions. Those who aren’t at-risk have someone close to them who is.

“They are part of our family, and risking their health is something we’re not willing to do,” Hirsig said.

According to CFD, visitors spent more than $28 million during the event’s 10-day run in 2019. That generated more than $1 million in local and state taxes with more than $5 million for overnight lodging and nearly $9 million for retail businesses.

It also created more than 300 jobs, resulting in $5 million in wages and salaries during the event.

“Holding these events without their night shows, their parades or the carnivals just wouldn’t be the same,” Gordon said. “Simply having these events does not guarantee folks will come or, if they do, that they won’t get sick afterward. That’s why big-name stars have canceled so many of their shows.

“No matter how we tried to find solutions collectively, we recognized the challenges were exceptional, and the risk of failure could set these rodeos back for years to come.”

Hirsig knows the decision to cancel these rodeos is unpopular, and will be met with harsh criticism. He stressed that the decision wasn’t made hastily. Even though the rodeo heads may not be happy with the decision, they understand it was made with the best interest of the public in mind.

“We are entertainment planners, not health specialists, unlike most everyone on Facebook today,” he said. “We rely on our state officials to give us guidance on our events. We appreciate their time and the job that they must take on. We do not envy any of their decisions they have to make, as they all are met with controversy one way or another.

“We all sat in a room – be it a Zoom room – listened and respected what they had to say and came to a decision. We may not like the way that it all turned out, but we left that meeting shaking hands – virtually – with no animosity, because that is the way we do business in the state of Wyoming.”

CHEYENNE – For the first time since its creation, Cheyenne Frontier Days will be canceled this year due to safety concerns amid the COVID-19 p…