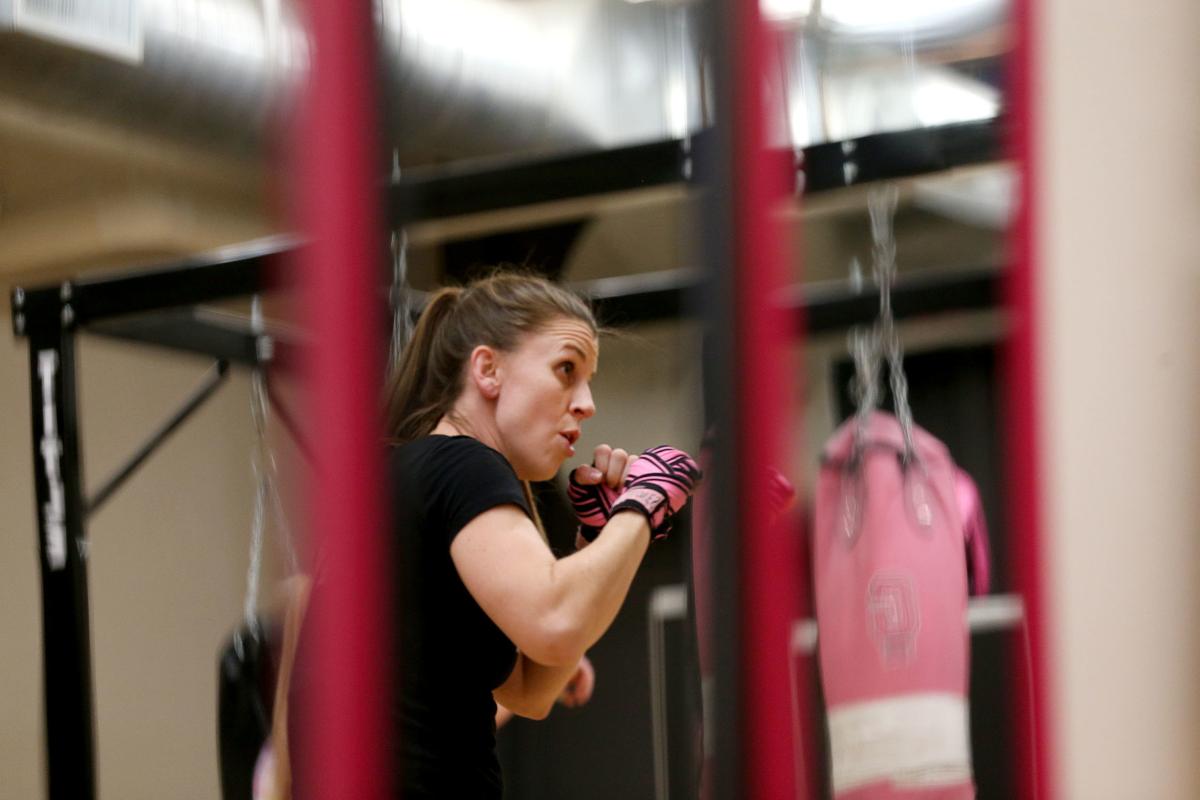 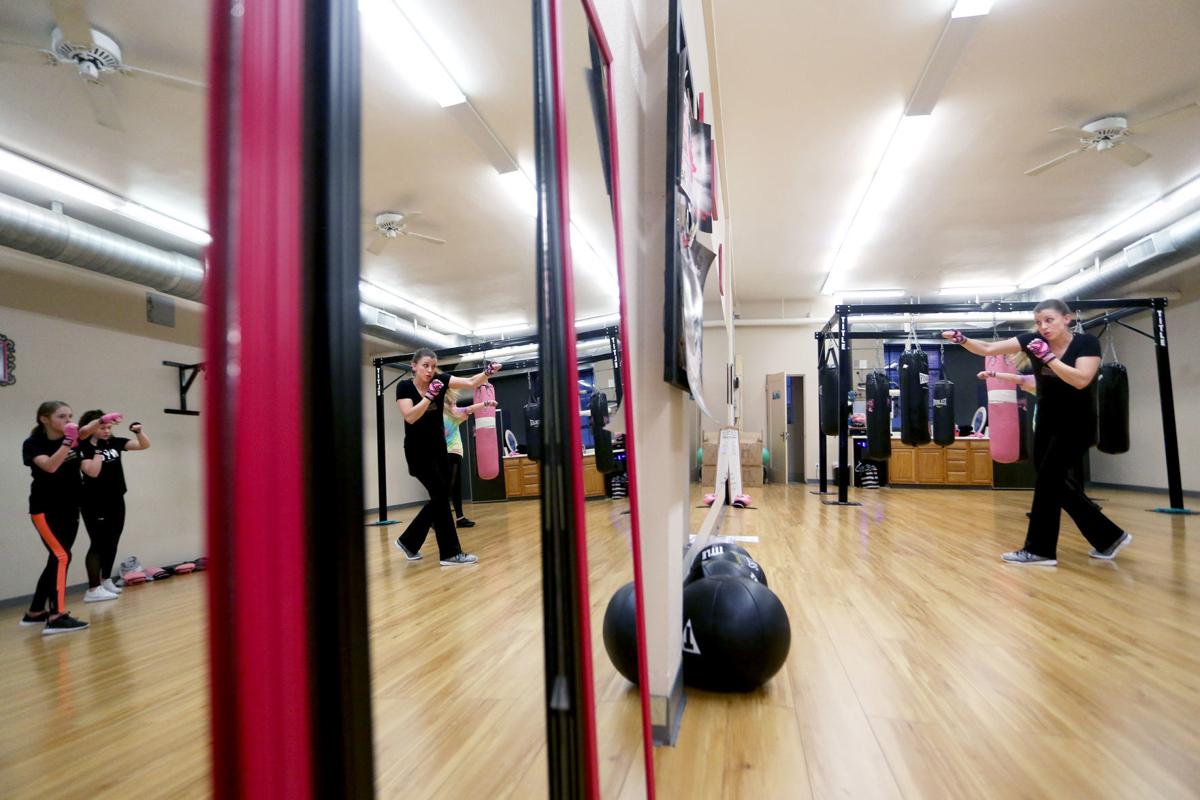 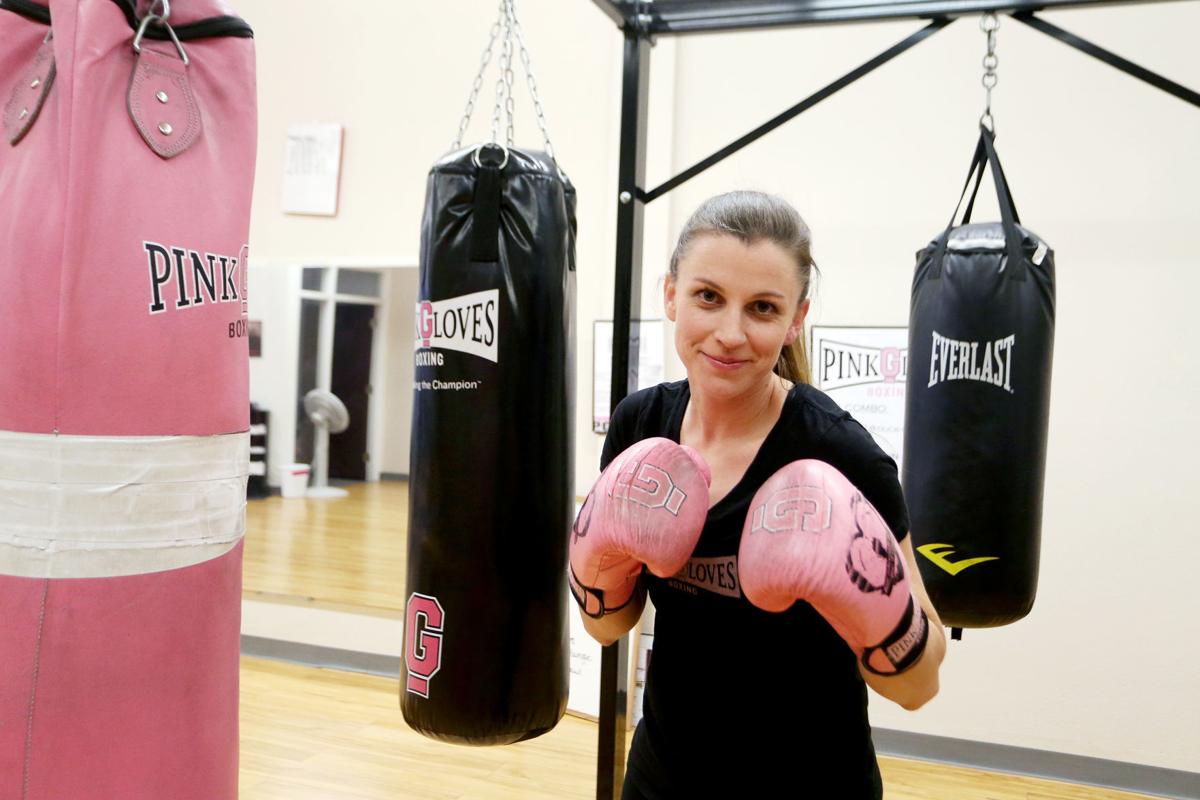 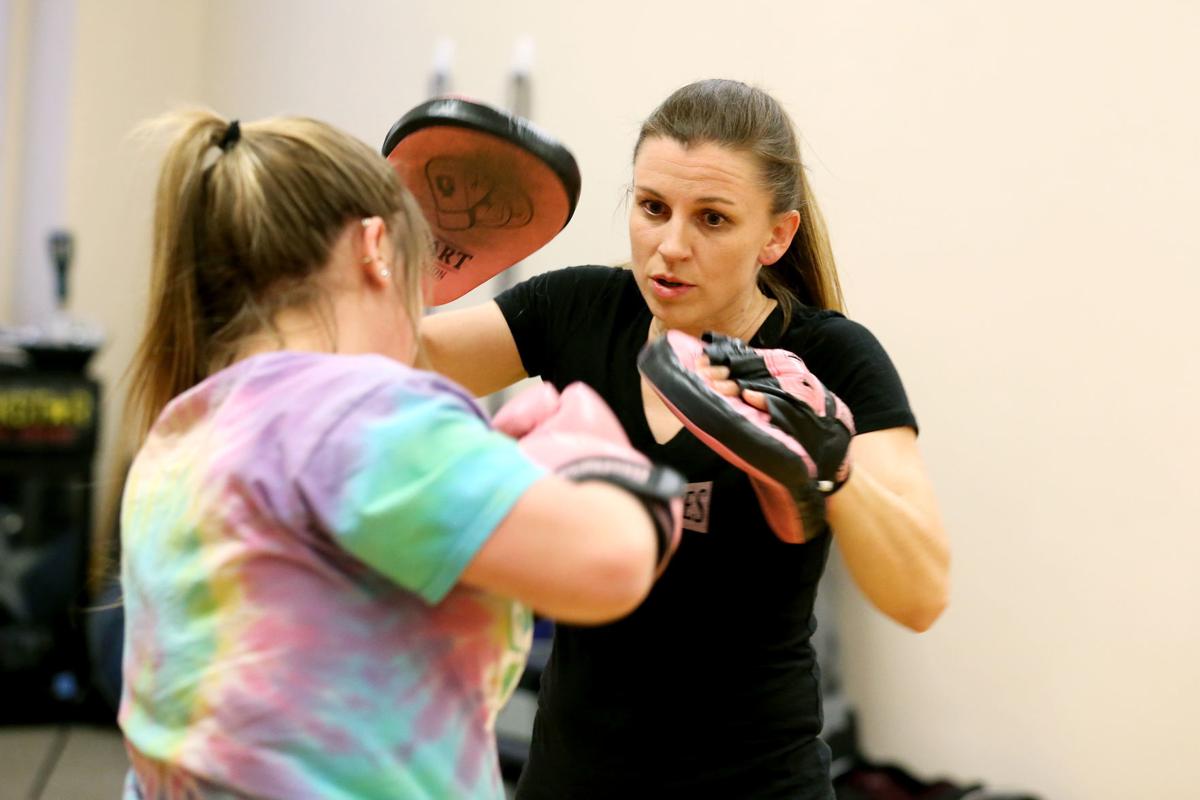 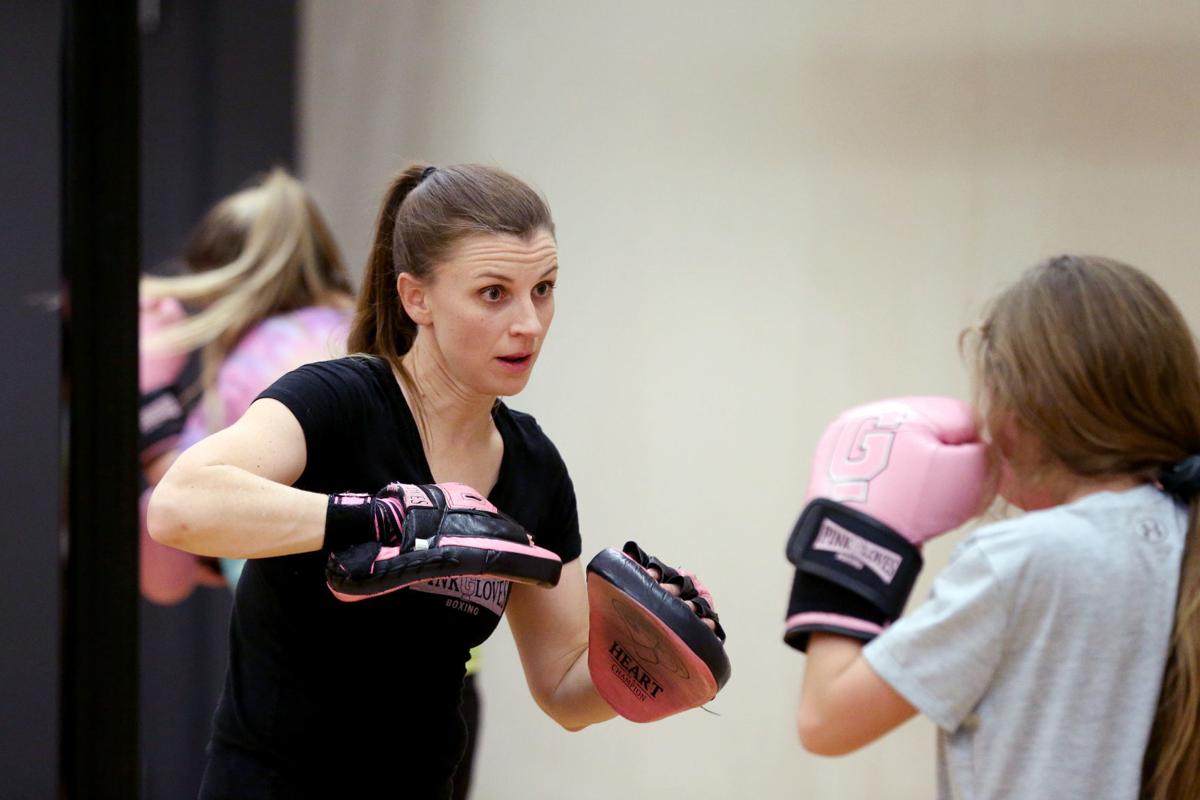 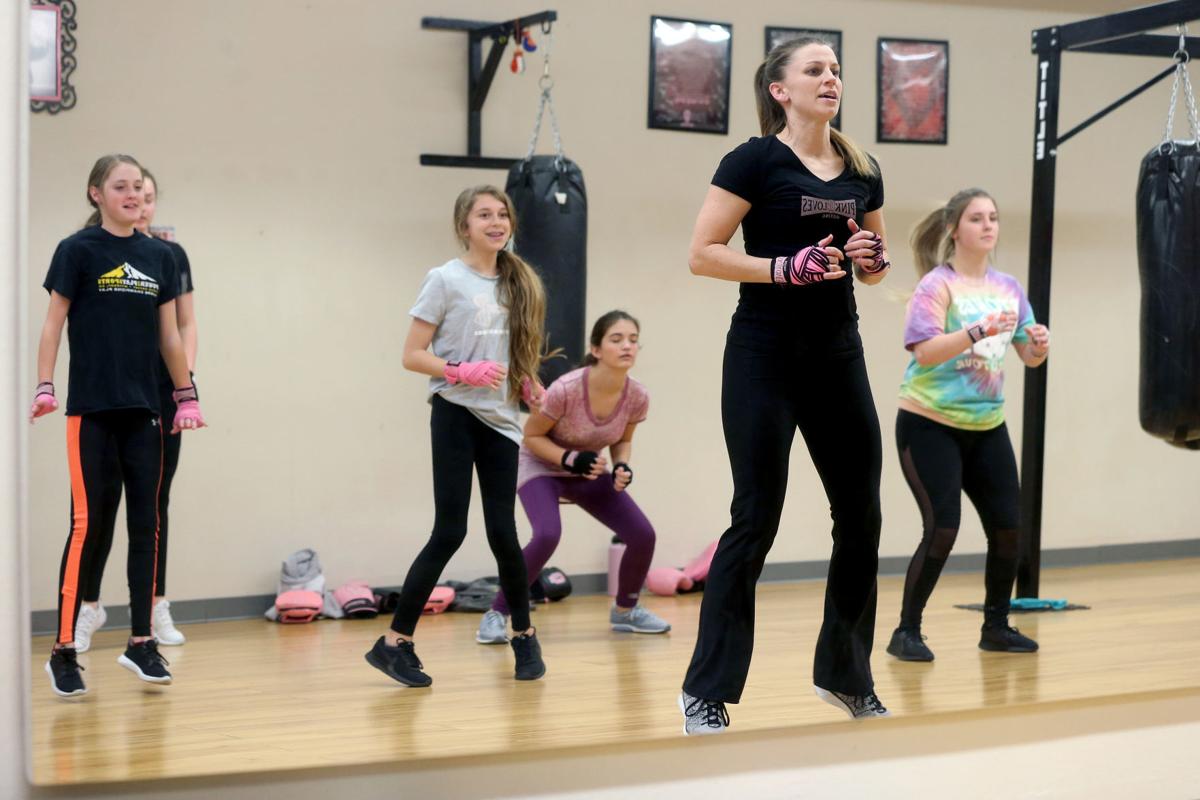 Jan. 13 was a hard night for the women of Pink Gloves Boxing Cheyenne. It was the death anniversary of a member’s loved one, and every woman in the group seemed to be mourning the loss like it was their own – likely because it was.

Pink Gloves is a national Olympic-style boxing program designed for women ages 14-100, and the local chapter was started by Janell Mellish in 2015. She said the group is meant to empower women to realize their own strength, but somewhere along the way, something else happens: they become family.

“I’m sorry,” member Amber Mueller said through tears, explaining the bond she has with her fellow boxers. “If somebody in the gym is going through something, (Mellish) rallies everybody together. Whether it’s somebody trying to go through the adoption process and we do a poker night to raise money, or we get together to help someone mourn.”

Mellish is a veteran Air Force drill sergeant, author, boxing and life coach who met her husband when they were both stationed at F.E. Warren Air Force Base. They jumped around to several bases for a few years, but in January 2014, they landed in Montana, where Mellish was first introduced to Pink Gloves.

At the time, she wasn’t looking for a group of friends. She was simply looking for a good workout – a workout that produced particularly strong individuals. Pink Gloves was the perfect fit, so when she and her family moved back to Cheyenne six months later, she wasn’t ready to stop boxing.

But as soon as Mellish started boxing alone in her basement, she realized she was missing a core element of her workout: her peers.

“I found that it’s actually the community that I was really drawn to,” she said. “I hadn’t really seen anything anywhere like what we do, you know, a group of women that box, and so I thought, ‘Well, I’m going to try and do this kind of thing on my own.’”

And she did. In January 2015, Janell opened a small Pink Gloves program of 18 members at 007 Gym on Fox Farm Road. It became so popular, she had to open a new gym two years later in an alley off Logan Avenue. She also outgrew that space, leading to her current location on Thomes Avenue, called Arena Training Institute, which has housed the program for three years.

Pink Gloves Cheyenne celebrated its fifth anniversary earlier this month – a milestone that means more to Mellish than she’s able to describe.

“I think a lot of women, you know, they convince themselves that they’re not strong, and boxing, and especially this environment, forces them to embrace it,” Mellish said. “I really believe the power of your punches isn’t just the power put behind it physically. It’s the power of your mind changing and your heart believing that you are this person, that you are capable of being so much stronger than you ever knew.”

The program requires a four-month commitment (at a cost of $105 per month, all equipment included), which pushes women to give Pink Gloves a real shot before deciding if it isn’t for them. Mellish noted the class takes only two hours of every member’s week, and that time is spent getting healthier – not only physically, but mentally.

Working out in a group, she added, helps with both motivation and accountability. When one of her members skips a couple classes without a heads-up, she or another member always checks in. Mellish wants to know that her members are not only OK, but that they’re not giving up.

Mueller joined Pink Gloves in November 2017, a little under a year after moving to Cheyenne, and the gym is where she made many of her first friends in town. She had a background in cardio kickboxing and was looking for a similar workout to do locally, but she had no idea that she’d be learning much more than shadowboxing and sparring.

“It’s very different,” she said. “I’ve always belonged to, like, LA Fitness or Gold’s … Those gyms you go and, unless you make a friend in a workout class, you do your thing and leave, and that’s not the case here. Which can be intimidating for me because I can be an introvert at times, but this has helped me break out of my shell.”

Every class ends with stretching and an introspective question, Mueller said, which Mellish asks, but never requires a response to. When she first started attending classes, Mueller opted to listen to others’ answers and not participate, but as she began to feel more comfortable, she opened up. She couldn’t help it.

“She has this way about her personality,” Mueller said of Mellish. “She has no judgement, and is one of the most supportive people I’ve met in my life, which is saying something because I’ve moved seven times in the past 14 years. She’ll be a friend for life.”

Every class includes shadowboxing in the mirror, which Mellish said is typically her members’ least favorite part of every lesson. They don’t like watching themselves work out, but it’s an important confidence-building exercise.

“They hate that part,” Mellish said. “But as they practice that, they’re convincing themselves that ‘No, I am strong. This is me. This is me throwing a punch. This is me fighting back.’ And that truly changes the mind. That’s one of the most amazing things about the whole thing … women change right in front of your eyes.”

That transformation is sometimes a weight loss journey, and other times it’s a journey to finding self-confidence, but Mellish said it’s always life-changing in some way. Anyone can box, she said without a shred of doubt in her voice or steadfast gaze. Everyone just needs a little push, and that’s exactly what she does (keep in mind that she’s a former drill sergeant).

She’s a tough instructor because she cares about her members’ success, whatever that means for them personally. The program is tiered, and boxers have to test out of every level, but Mellish recognizes that some members feel more comfortable hanging out in the same level or putting off the test for a few months.

Most level-based programs foster some form of competition, but Mueller said confidently that she’s never felt the need to compare herself to other members in Pink Gloves because the environment is so positive and accepting. It always feels like an even playing field, she said of Mellish’s classes, regardless of everyone’s success fitness or career-wise.

“I don’t know how she does it,” Mueller said. “She digs deep and talks to women on a personal level. Everyone in that gym connects on one level … Most people think you get a bunch of women together and you think they’re not all going to get along, but how she runs the club is astounding. We have 80-plus women here and don’t have drama.”

And that was exactly Mellish’s goal, to create a place for women that didn’t include any of the negativity (and sometimes borderline toxicity) that’s stereotypically associated with women’s groups. There’s no room for competition at Arena Training Institute – only room for love, respect and support.

Mueller recently went through a difficult time with her family, and to help cope, she told Mellish she needed to take a step back from Pink Gloves. Instead of letting her walk away, the boxing coach invited her to a different program, Warrior Challenge, which is a boxing/inquiry yoga seminar she leads with Tiffany Caldwell-Flournoy. The 2 ½-hour seminar is focused on “revealing the mental and physical obstacles that may be holding you back,” according to the gym’s website.

“I went and felt like she was talking directly to me,” Mueller said. “I was in tears by the end of it. It was so moving to me. She just reached out, and she didn’t have to.”

In December 2018, the gym also added a program for people living with Parkinson’s called Rock Steady. The non-contact, boxing-inspired fitness routine – based the national training program of the same name – is said to dramatically improve the quality of life for people living with the disease by improving hand-eye coordination and forcing participants to make their body move in ways that their mind doesn’t want to, Mellish said.

The heart and soul of her gym, however, will always be the members in her original program.

“That will always be the backbone of it … the women of the Pink Gloves Boxing program,” she said. “They’re the ones that have built this, and it’s amazing what strong women can do together. They band together, and that way they can really, truly change the world.”

For more photos and a video of Janell Mellish in action during one of her Pink Gloves classes, go online to WyomingNews.com.

Cost: $105 per month, with a one-time $20 registration fee for Pink Gloves