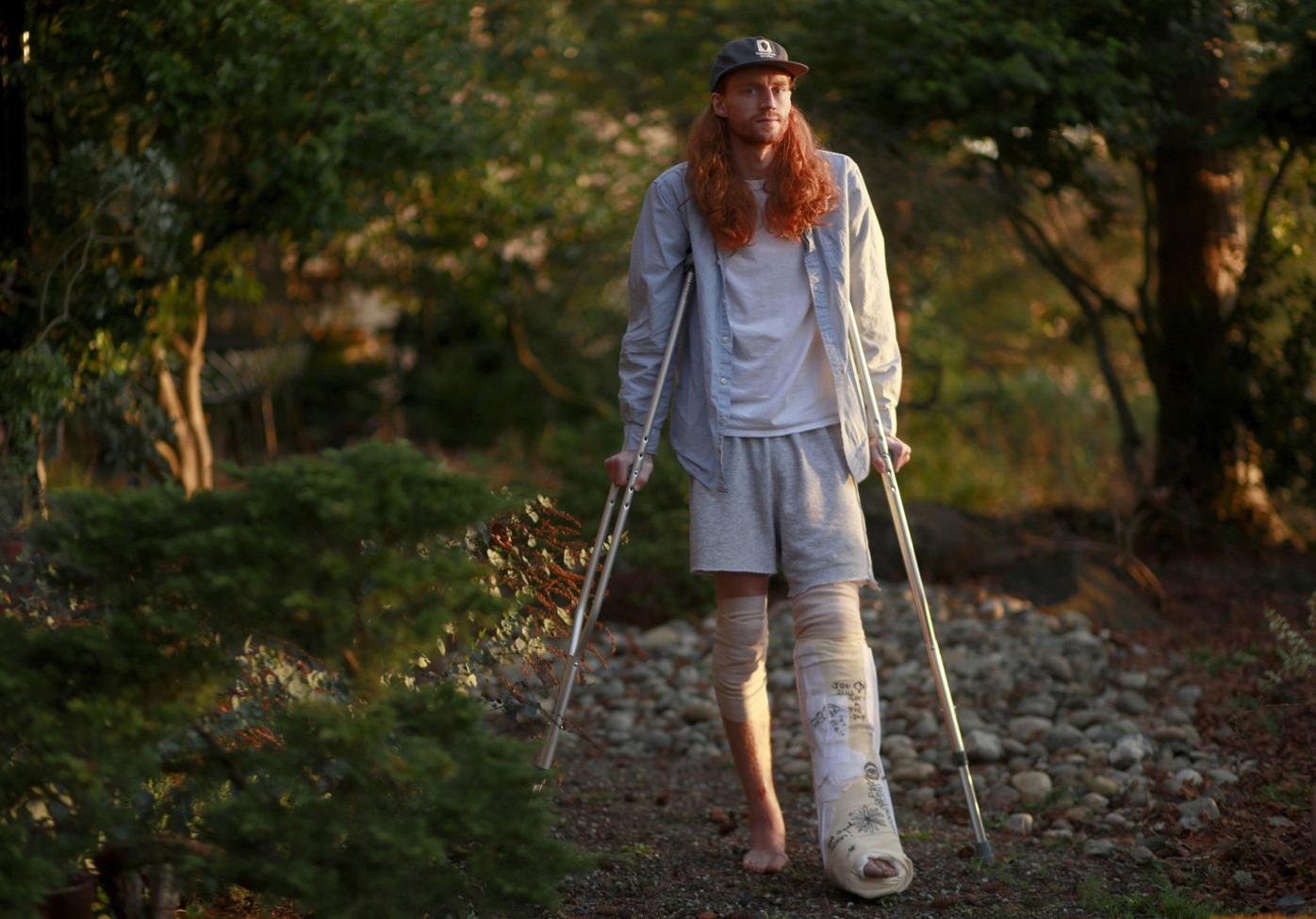 Seattle resident Joe Oldendorf on Feb. 26 in Seattle. Oldendorf, who grew up in suburban Chicago, is spending time with family after breaking his leg on a trail run on the Olympic Peninsula. He spent hours crawling to get to cell services on his hands and knees. Tribune News Service 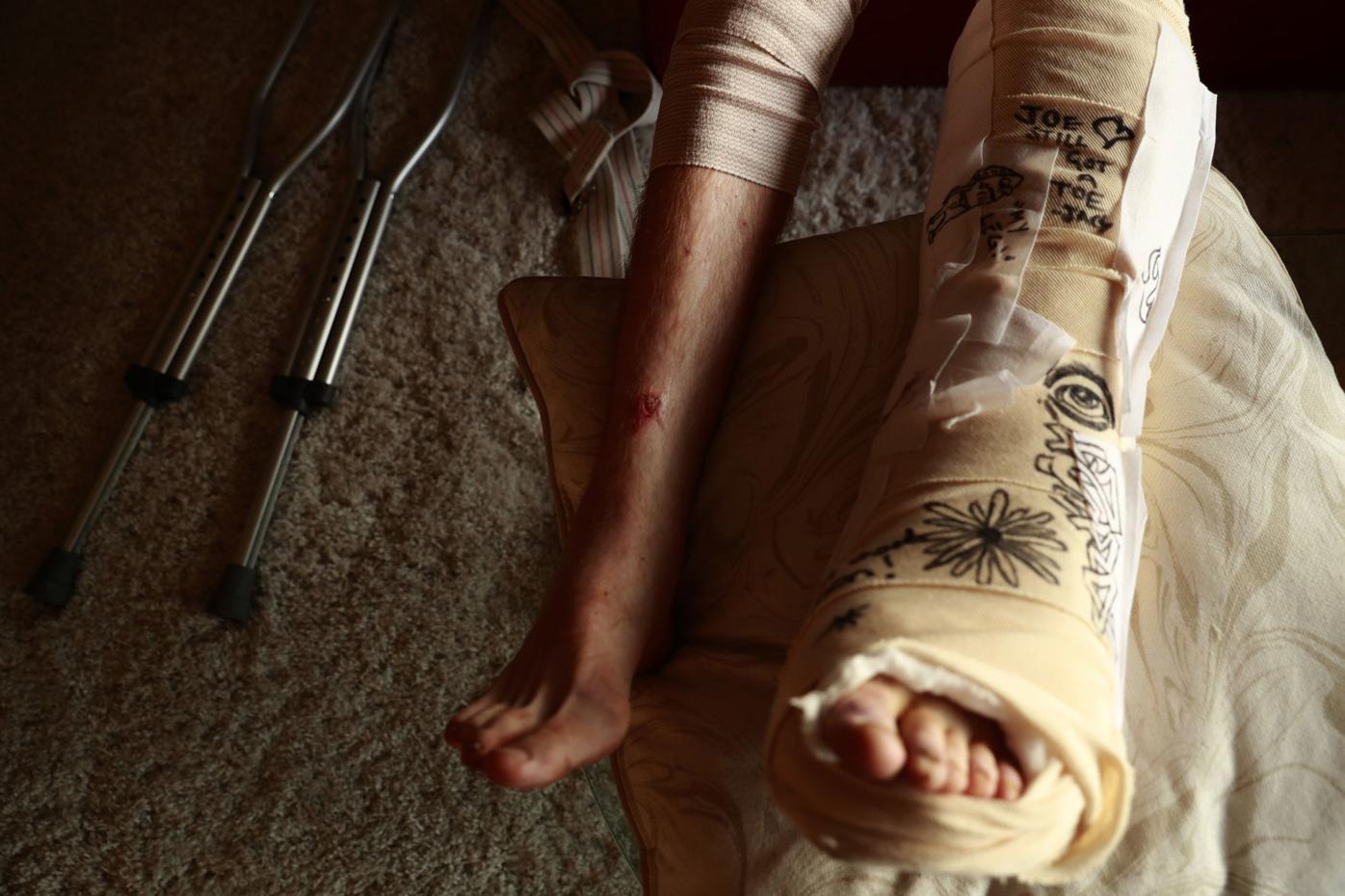 Seattle resident Joe Oldendorf on Feb. 26 in Seattle. Oldendorf, who grew up in suburban Chicago, is spending time with family after breaking his leg on a trail run on the Olympic Peninsula. He spent hours crawling to get to cell services on his hands and knees. Tribune News Service

He would never give up trail running, but Joe Oldendorf said he will probably make some adjustments to his routine after his recent endeavor, in which he fractured his leg during a solo run and found himself stranded for more than 10 hours on the Olympic Peninsula.

Oldendorf, who turned 27 years old last Tuesday, was halfway through a 20-mile run through the Olympic National Forest on Feb. 21, when he slipped on some ice. There was no cell service, but Oldendorf said he knew he couldn’t stay where he was – the sun was about to set.

He fashioned a splint out of his raincoat and sticks, though it didn’t help much, and started crawling toward the trailhead. Seven hours passed before he was able to connect with 911 dispatchers.

“I was really exhausted at that point, so I took out my emergency blanket and tried to insulate myself the best I could,” he said. “But I laid down for a couple minutes and realized I wasn’t going to be able to wait (for rescuers). I would freeze to death.”

He continued crawling for another four hours.

“I was pretty diligent about keeping my mind off of the negatives,” Oldendorf said. “I knew this was my only shot. I needed to keep moving. I didn’t stop and entertain anything else.”

Rescuers found him around 4:30 a.m. Saturday, warmed him up and splinted his leg. Around 7 a.m., he was hoisted into a Coast Guard helicopter and flown to Harborview Medical Center, where he was treated for hypothermia along with a fractured tibia and fibula. His knees were also torn up from crawling through the forest.

He was released from Harborview on Feb. 23. He now lives in Seattle’s Fremont neighborhood, but plans to return to the Chicago area, where he grew up, to be with his family during his three-month recovery.

Oldendorf, who’s pursuing his nursing degree at North Seattle College, has loved running since seventh grade. He joined the cross-country team in high school and continued the sport in college, later taking on the Boston Marathon and Sleeping Bear Marathon in Michigan.

“I found that (trail running) was my real passion and never liked running on pavement again,” he said. “Running on trails is its own beautiful sport ... It feels like a gift. It’s a really independent way to be able to immerse yourself in the woods.”

Oldendorf normally runs 20 to 30 miles a couple times per week. He said he doesn’t know too many other people who enjoy the sport, so he usually goes alone.

“I take all the precautions I can,” he said. “I pack anything extra, way more food and water, extra clothes, backup phone battery ... But you can’t always fully prepare. Nature’s a powerful thing.”

Sgt. Brett Anglin of Jefferson County Search and Rescue, which had four volunteers on the scene, said Oldendorf was extremely lucky.

“This was a unique situation in that the trail runner at the time was able to get cellular phone service,” Anglin said. “This is very rare. It’s one of the few times I’ve heard that happening.”

Usually an injured hiker would have to send another person down the trail for help, he said.

Eric Bone, who leads Seattle-based Northwest Trail Runs and organizes trail running events in the region, had some advice for those who want to be prepared for similar situations.

“It costs some money” he said, “but if that’s your lifestyle, it beats not making it out if something were to happen.”

He also advises trail runners to have good map skills, try to carry a personal locator beacon, let someone know where you’re going, pick out the right footwear, and bring a buddy.

Toni Weyman Droscher, a spokeswoman for Washington State Parks, added that it wouldn’t hurt to take a wilderness first-aid course. And don’t exceed your limitations, she said.

While the state parks department doesn’t track how many people go trail running in the region, Weyman Droscher said the activity has recently grown in popularity.

“A lot of this comes down to putting five minutes down for planning,” Bone said, adding that a couple of his friends have small, ready-to-go outdoor survival kits they grab before they head out the door. “But it’s just a risky endeavor. It’s best to know what you’re getting into.”

Although Oldendorf isn’t planning to stop trail running, he said he doesn’t think he can run alone anymore.

“Any avid mountaineer knows it’s a calculated risk every time you go out into the wilderness like that, especially when you go alone,” he said. “It’s not that I had never entertained this happening. But I could’ve been more prepared.”