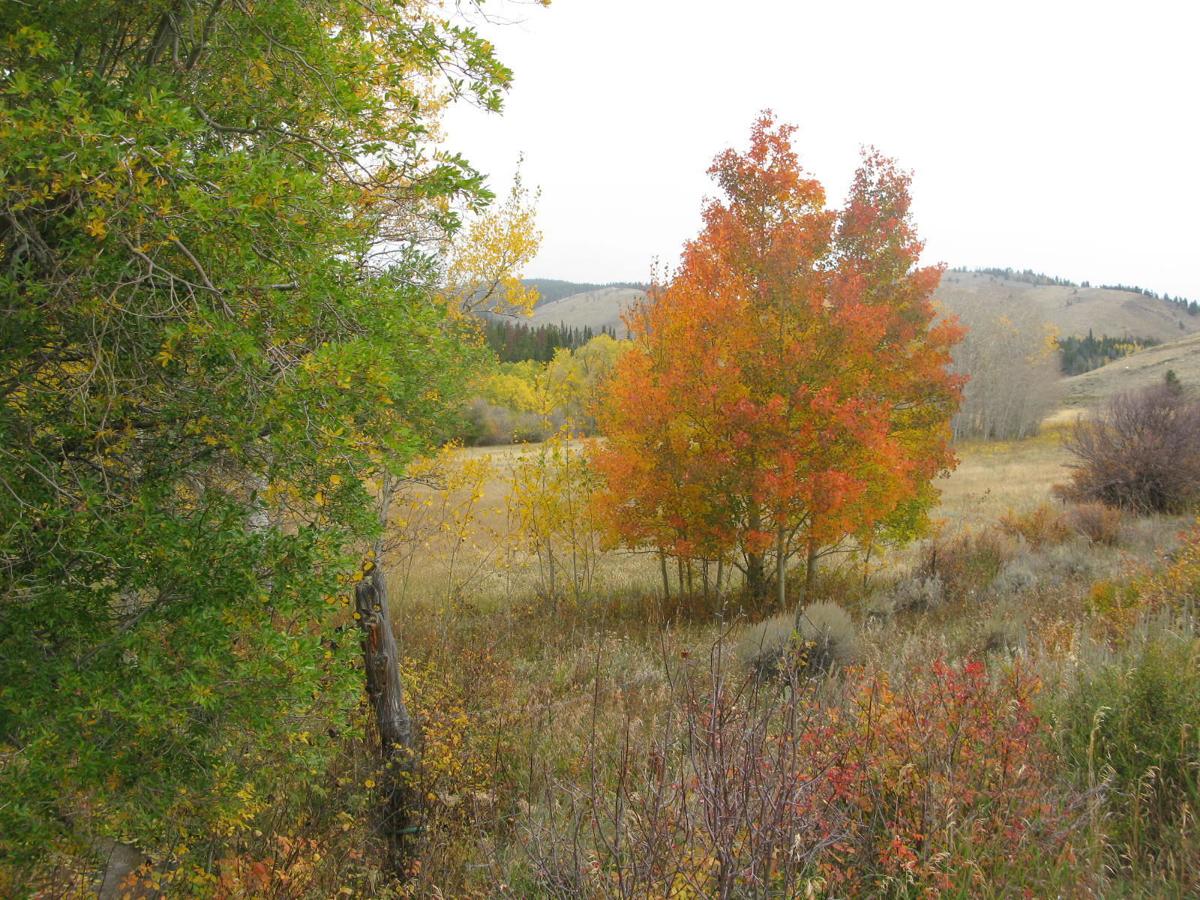 In a normal year, deciduous trees in the Medicine Bow Mountains offer spectacular golds, orange and red explosions of color. Due to the early hard frost this year, the colors are expected to be muted, but could show good color in some areas. Amber Travsky/courtesy 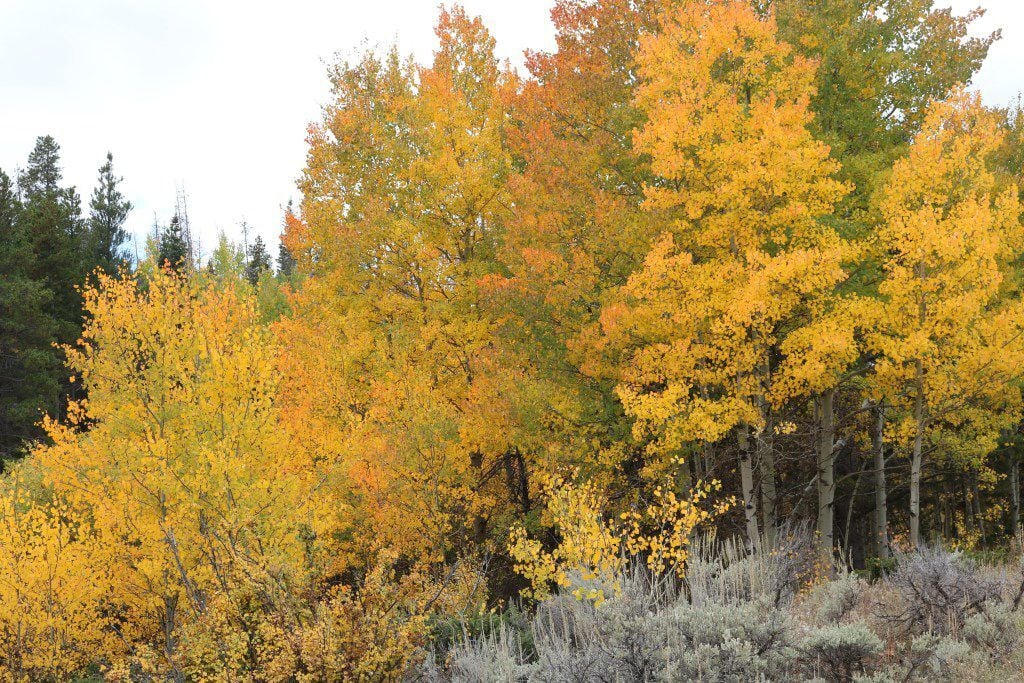 The Pole Mountain area between Laramie and Cheyenne offers some of the best leaf peeping opportunities. Following creek bottoms were cottonwood trees mix with aspen can produce a wider range of colors. Amber Travsky/courtesy 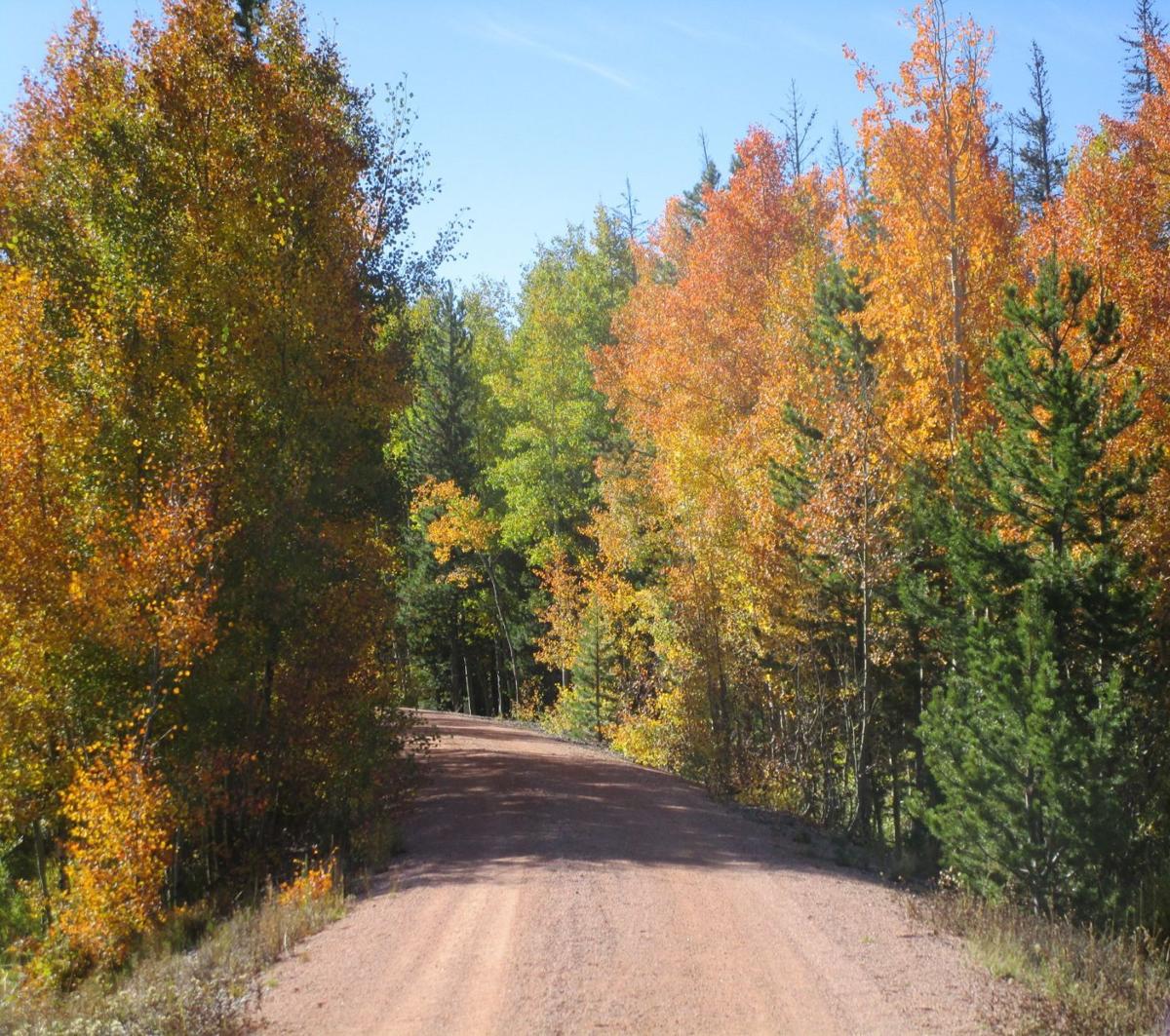 The Medicine Bow Rail Trail, a 21-mile, non-motorized path in the Medicine Bow Mountains, offers excellent leaf peeping opportunities for those viewing on foot, by bicycles or via horseback. Amber Travsky/courtesy

In a normal year, deciduous trees in the Medicine Bow Mountains offer spectacular golds, orange and red explosions of color. Due to the early hard frost this year, the colors are expected to be muted, but could show good color in some areas. Amber Travsky/courtesy

The Pole Mountain area between Laramie and Cheyenne offers some of the best leaf peeping opportunities. Following creek bottoms were cottonwood trees mix with aspen can produce a wider range of colors. Amber Travsky/courtesy

The Medicine Bow Rail Trail, a 21-mile, non-motorized path in the Medicine Bow Mountains, offers excellent leaf peeping opportunities for those viewing on foot, by bicycles or via horseback. Amber Travsky/courtesy

It is that time of year again when the hills come alive with color. Or, at least that is what typically occurs by mid- to late September. This year, of course, is not normal. That is true in many ways, including this fall’s leaf peeping season.

The calendar is the primary trigger in the timing of the color change. The decrease in sunlight switches off the mechanism in the leaves that creates chlorophyll. As the green fades, the gold color dominates until the dying leaf flutters to the ground.

The degree of color change each fall is ultimately dictated by the weather. Ideal conditions for a spectacular color show include a moist growing season, but dry autumn with warm, sunny days and cool – but not freezing – nights. Minimal wind is also helpful for the trees to hang on to their golden leaves a bit longer.

At the point where leaf stem meets twig or branch is the abscission layer. As days shorten, this layer begins to choke off the veins that move water into the leaf and food into the tree. Once the leaf is completely choked off, the layer becomes dry and flakey as the leaf finally falls off.

If it freezes or a snowstorm suddenly hits, the leaves can freeze green and turn brown or black. With freezing temperatures, the abscission layer hardens more rapidly.

If the hard freeze arrives too early, the trees have yet to form the abscission layer. On these trees, the leaves freeze and remain attached to the branches. Eventually wind and snow causes the leaf to drop but, until then, the leaf becomes a snow-catcher and adds weight to the tree’s limbs, resulting in branches breaking and falling from the tree.

The snow that arrived Sept. 8 and the accompanying hard freeze puts this year’s leaf peeping season in jeopardy. It’s hard to say if the leaves might just turn black or, if they turn orange or gold, the color might be dull and drab.

Gregory Brown, professor in botany at the University of Wyoming, said this year’s color show will likely vary based on location.

“It depends on just how cold it got at any one location,” Brown said. “It also varies with the species of tree, their physiological condition or hydration, and the micro-climate where they grow. How much tree color we get this year is, I think, a real crap-shoot. It will likely be muted or tend toward the dry green to brown side.”

Brown said trees can shut down pretty fast when the cold hits. During a monitoring of cottonwood trees on campus a number of years ago, a plant ecophysiologist in the Botany Department discovered trees were fully transpiring during a warm fall period. Then, when temperatures dropped to 19 degrees overnight, they completely shut down physiologically the morning after the cold snap.

“The plant physiologist was surprised at how fast the trees shut down,” Brown said. “I recall him thinking it was probably due, in part, to the dry-cold, and how long that night stayed down around 19 degrees.”

As of the weekend after our early snow this year, aspen trees in the Medicine Bow Mountains looked mostly unscathed. A few had blackened leaves and others had leaves that changed a rather dull yellow. The majority of trees looked green and healthy.

A hiker in the Pole Mountain area the same weekend reported similar conditions with the cottonwood and aspen trees looking as they had all summer: green and heathy.

There are no guarantees this year, but getting out for a drive, hike or mountain bike ride is worth it. If nothing else, it’s a good excuse to enjoy the pleasant fall weather, regardless of how much color might appear.

Aaron Voos, public affairs specialist with the Medicine Bow-Routt National Forests, said leaf peeping options abound along roadways and trails. Suggestions on where to go are shown on a map available on the Medicine Bow National Forest website under the “Special Places” tab. In addition to roadways within the Snowy Range, the map also shows routes for Pole Mountain and the Sierra Madre Mountains.

The best color in the Medicine Bow National Forest is typically where aspen trees are especially abundant. Aspen is particularly plentiful where hardier trees have been damaged or destroyed.

“There are many areas around here to leaf peep,” Voos said. “Some of the best areas happen to be along our roads since most have had hazard tree work done and now aspens are some of the first pioneer species to come back. We encourage people to take a drive.”

For those looking to hike or bike to view the color, head to the Medicine Bow Rail Trail. One especially colorful section is south from the Woods Creek trailhead off of Highway 230 in the Snowy Range. Another option is the trail section between the Lincoln Gulch and Lake Owen trailheads. In that section where it passes through the old Squirrel Creek Fire scar, aspen is especially abundant. Those trees should provide exceptional color, at least in a normal year.

The Corner Mountain hiking paths off of Highway 120, as well as paths along Sand Lake Road, are also excellent options.

On Pole Mountain between Cheyenne and Laramie, follow creeks bottoms where aspen mixes with cottonwood trees for more varied colors. Willows also add to the color, as well as other undergrowth along the creek bottoms.

The crystal ball remains cloudy on the quality of this fall’s color display. Here’s hoping for mostly mild weather the next few weeks. Even if the color is subdued due to the early snow and cold snap, it’s a great excuse to get outside and enjoy the crisp air before the snow falls in earnest.

Amber Travsky is a wildlife biologist who earned master’s degrees in wildlife zoology and exercise physiology from the University of Wyoming. She runs her own environmental consulting company, Real West Consulting, as well as a martial arts school. She authored “Mountain Biking Wyoming” and “Mountain Biking Jackson Hole,” both published by Falcon Books. She is the tour director and founder of the Tour de Wyoming bicycle tour, which crosses the state every July.