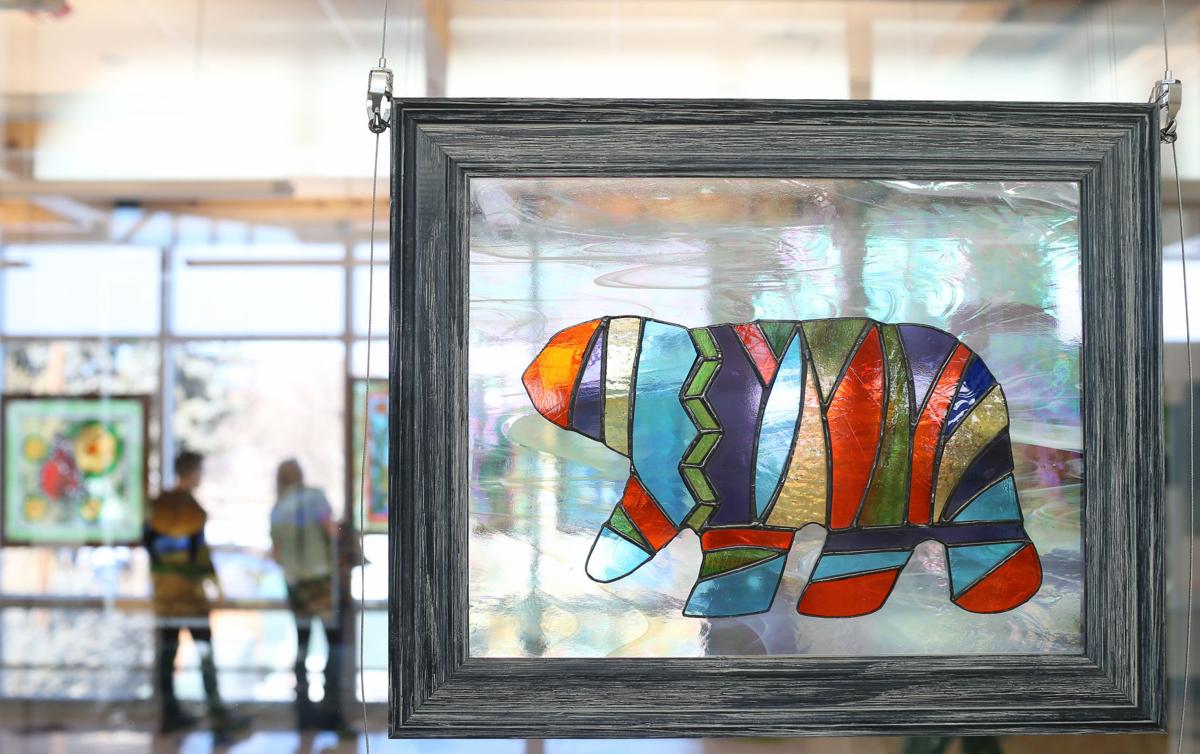 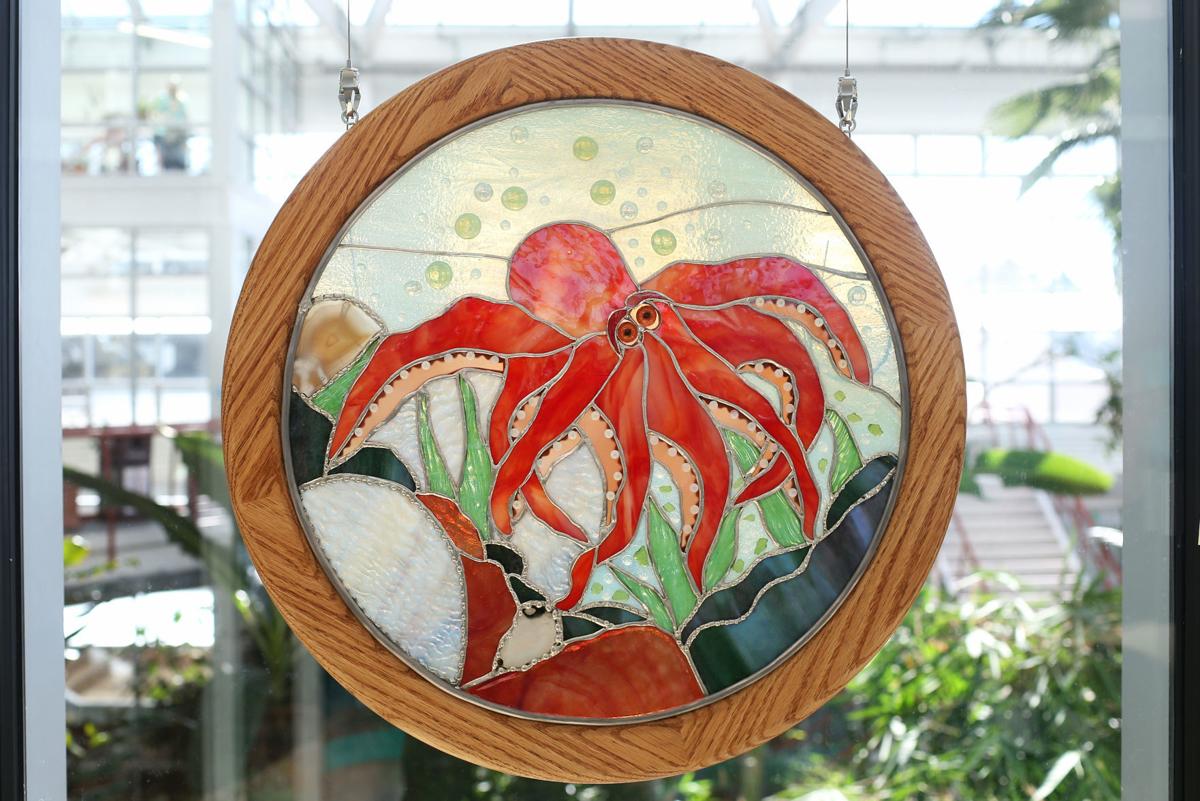 Artist Janice Duck’s “Meet Me At The Beach” stained glass piece hangs on display during the 37th annual Glass Art Show on Tuesday, Feb. 11, 2020, at the Cheyenne Botanic Gardens. Guests who visit the art show, which runs through March, can vote on their favorite piece to win the “People’s Choice Award.” Michael Cummo/Wyoming Tribune Eagle 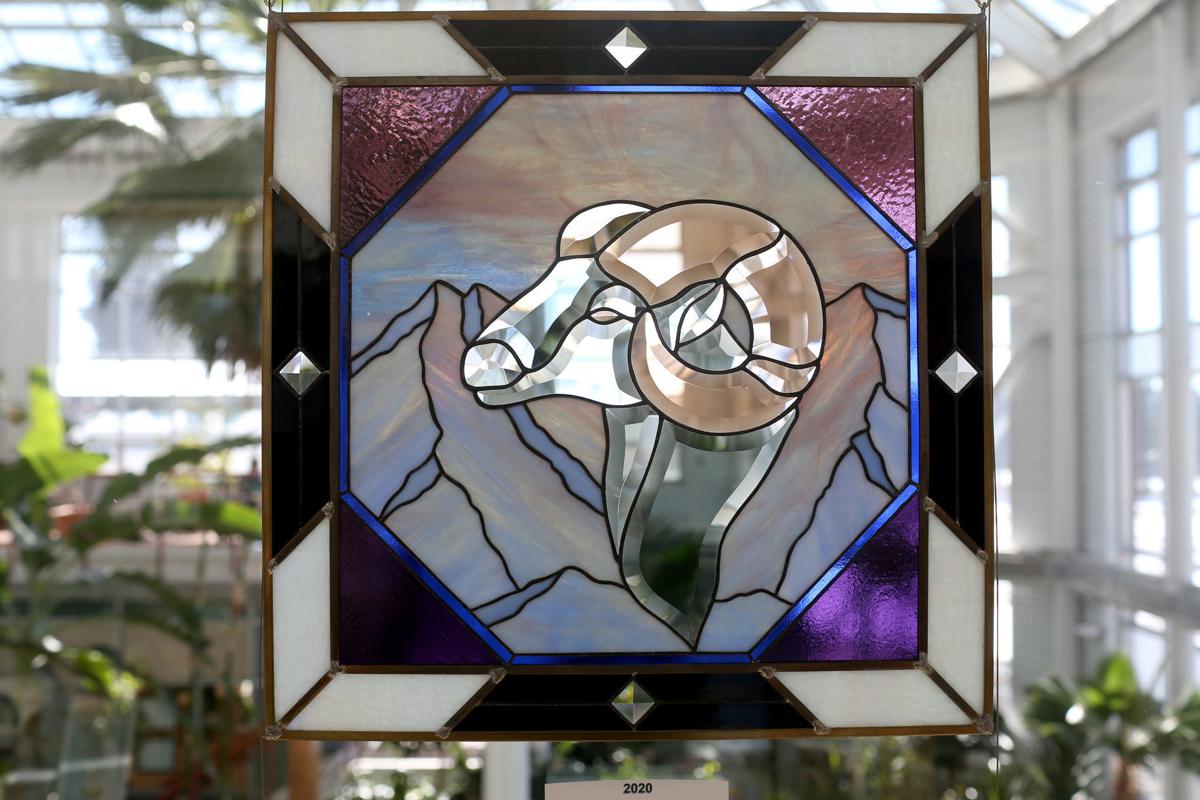 Artists Craig and Ronda McCune’s “Ram” stained glass piece hangs on display during the 37th annual Glass Art Show on Tuesday, Feb. 11, 2020, at the Cheyenne Botanic Gardens. Guests who visit the art show, which runs through March, can vote on their favorite piece to win the “People’s Choice Award.” Michael Cummo/Wyoming Tribune Eagle 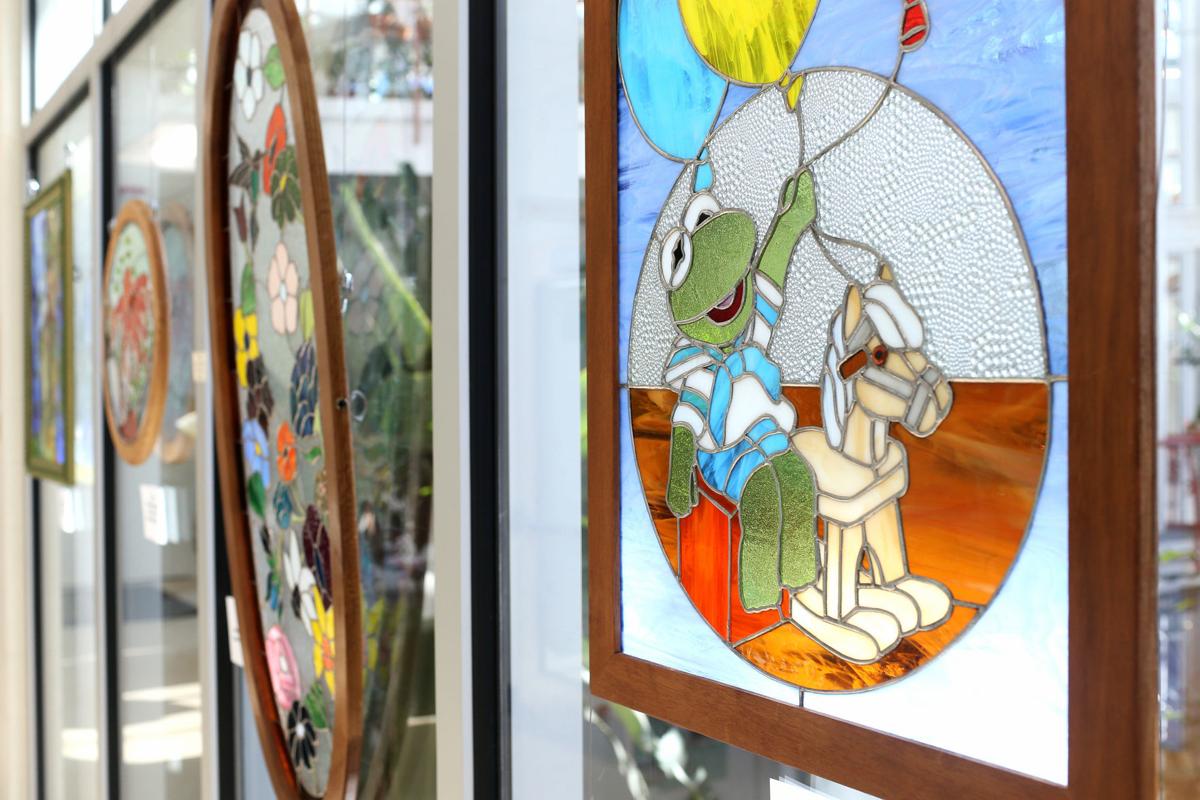 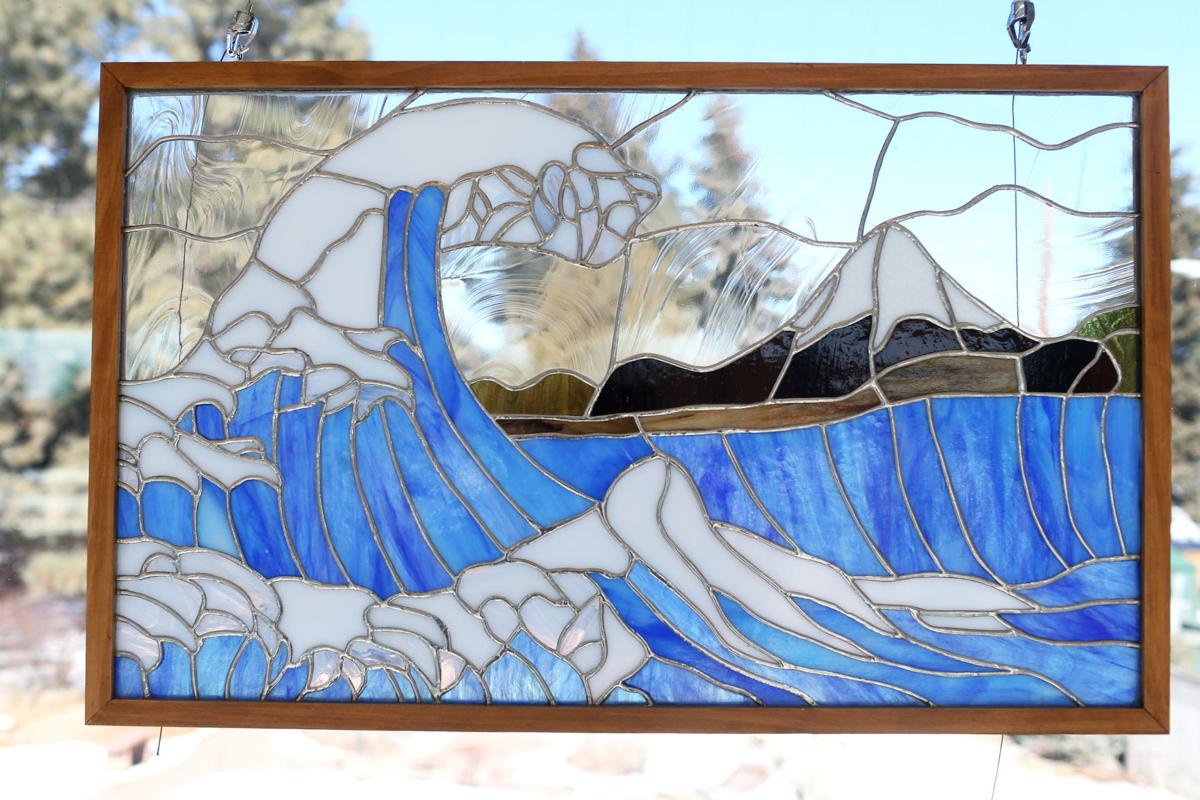 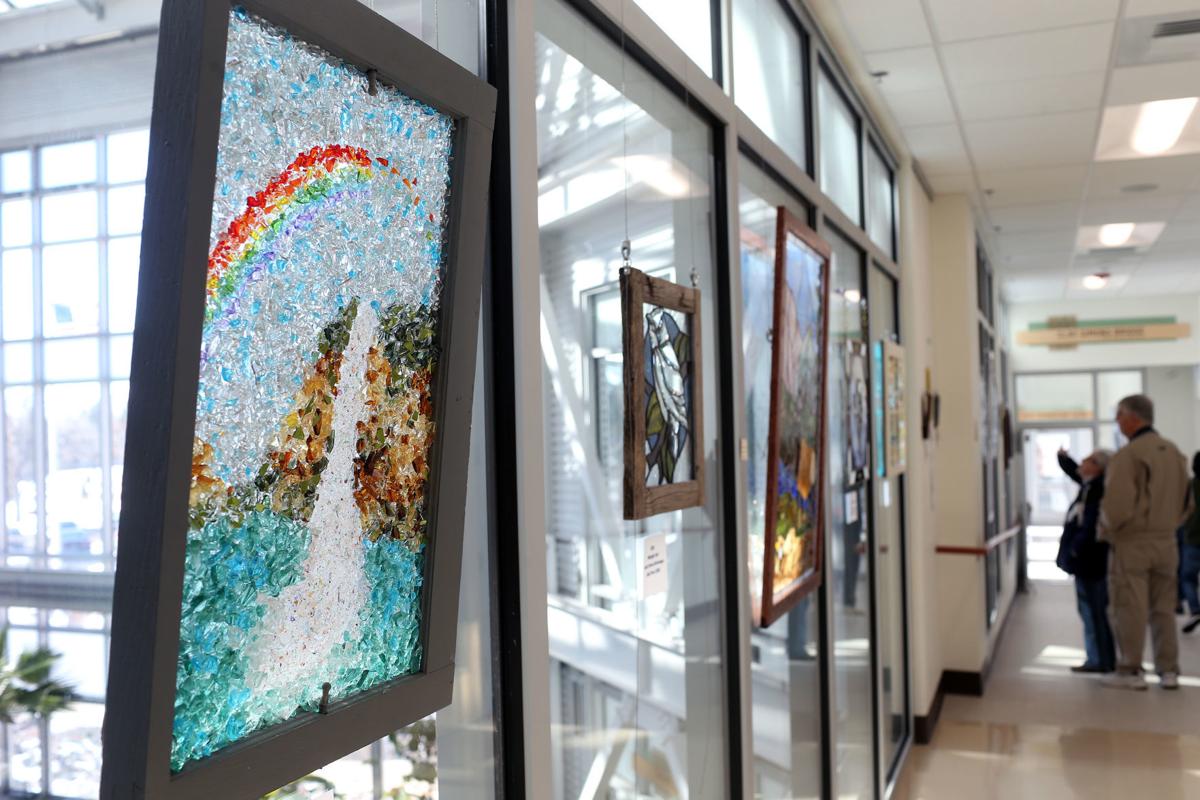 Artist Cindy Cochran’s “Waterfall” glass piece hangs on display during the 37th annual Glass Art Show on Tuesday, Feb. 11, 2020, at the Cheyenne Botanic Gardens. Guests who visit the art show, which runs through March, can vote on their favorite piece to win the “People’s Choice Award.” Michael Cummo/Wyoming Tribune Eagle

When the sun hits it just right, something special happens. A sense of childlike wonder seems to take over as the rays dance through the glass, adding a sparkle to the already dazzling artwork.

The 64 pieces currently on display in the Cheyenne Botanic Gardens’ 37th Glass Art Show (the largest glass art show in Wyoming) have this effect on people. There’s just something about the space that makes it ideal for a glass exhibit, said Director Tina Worthman on a recent walk-through of the show.

“We’re a plant museum, essentially, so it’s a natural place to relax. It lends itself to art,” she said. “It’s a passion of mine to bring the arts to everyone … and we’re free and open to the public, so we’re accessible.”

That accessibility allows for anyone with even the slightest interest to be exposed to glass art, which is a creative medium that few people have the patience to learn and get to know.

Barb Christofferson of Glassworks Stained Glass Studio is one such local artist who possesses the unique brand of patience this art requires. She guesses her love for the craft started between 35 and 40 years ago. It was on a trip to Washington state, when she was shopping and stumbled upon a mirror with a colorful stained glass hat atop it. She bought it, and – because there were fewer rules in the air back then – it traveled in her lap all the way home to Nebraska.

Christofferson studied it and decided she must learn how the piece was made. She took a stained glass class in Sidney, and she’s been mastering the medium ever since.

It was harder to find places to show her work in Nebraska, she said, so she was happy to find out about the Botanic Gardens’ show when she and her husband moved to Cheyenne a couple years ago.

“It’s inspiring, and it’s grounding,” she said of being part of the display, in which she has five pieces this year. “I’m not an expert or anything. I learn all the time … and going to the show, it’s a lot of fun to see what other people are doing.”

For the past 15 years, Christofferson has taught glass art to other interested adults. This year, her work is accompanied by that of three of her students, who also decided to submit to the glass show – a big point of pride for Christofferson.

“I learn all the time from my students,” she said. “That’s my favorite part of this. We have such a good time, and I love to see what they put out. It makes me feel good to instill a passion in people because a lot of time we’re missing that. We go to work and come home, and that’s it.”

Working with glass is cathartic for Christofferson, just like looking at it is relaxing for Worthman. There’s something about getting lost in a piece that makes Christofferson forget all her worries, and then the challenge of trying to find something new and exciting to do next keeps her mind active.

“Get passionate about something, and I think you’ll live longer,” she said. “Or maybe I’m just lucky.”

Christofferson has produced stained glass art inside everything from a horse’s collar to a fishing net, and right now she’s trying to work with aged barn wood to create something completely different – an idea that came to her when a friend tagged her in a photo of some driftwood on Facebook, asking if she could create the image out of glass.

Before the current Botanic Gardens building was built, Christofferson heard the show was a little cramped and in a room with much less natural light.

Worthman said when the new building was built a few years ago, there was a specialized hanging system installed to make it easier to hang works without the distraction of clunky chains or other rigging.

So, the pieces are easy on the eye and thoughtfully displayed, but what makes experiencing them so special?

“It’s such a fantastic outlet to see what people in this area are doing, and to have it at this beautiful venue with all these windows,” she said, trailing off as if she were admiring the scene in her mind. “And not a lot of people do it. It doesn’t take a lot (physically) to paint … but it takes a lot of equipment and knowledge to do this.”

This year’s show features everything from traditional stained glass to pieces made from hundreds of shards of crushed glass pieced together. The mystery surrounding how this diverse kind of art is produced reels people in, she continued, which is evident by how quickly the stained glass workshop she’s leading next month at the Botanic Gardens sold out.

Worthman agrees that there’s a particular charm to glass art that catches people’s eye. In a recent conversation with the man who refills the vending machine at the Botanic Gardens, she suggested he check out the show after he was done working.

Worthman was delighted to see that just a few hours later, the man returned with his daughter in tow, eager to show her what he had seen.

When: Now through March 31