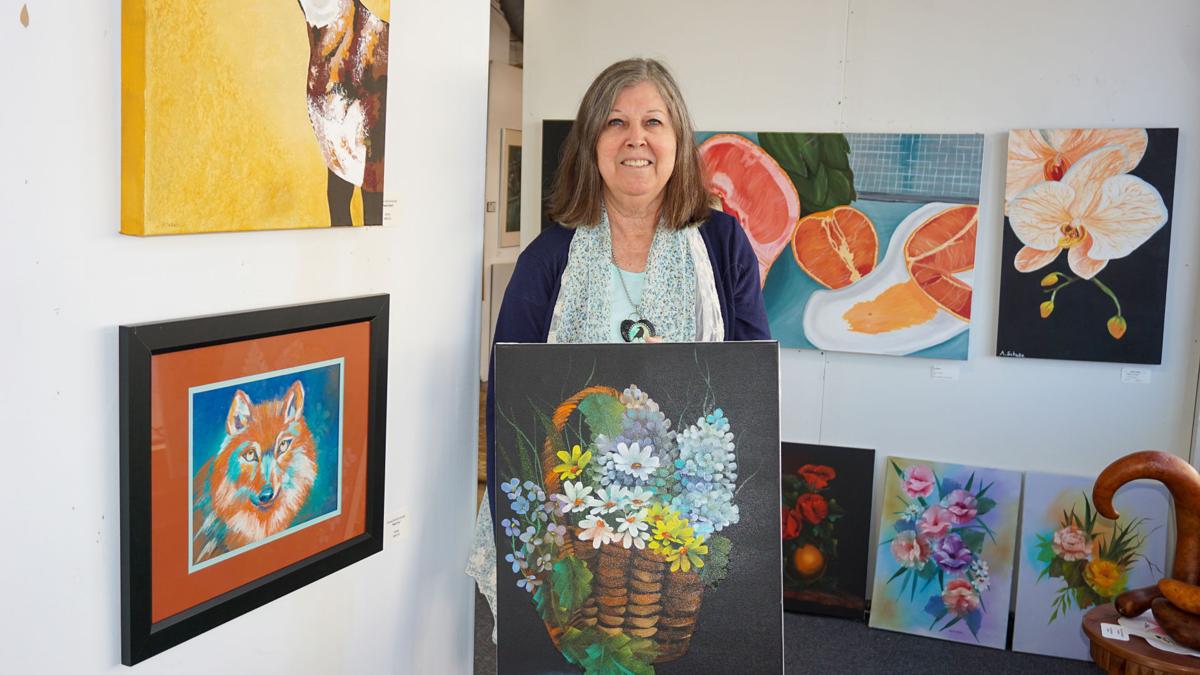 Donna DuPonte-Schultz is the newest resident artist at Art@TheHynds, where she is now certified to start teaching Bob Ross painting classes. Courtesy/John Schultz 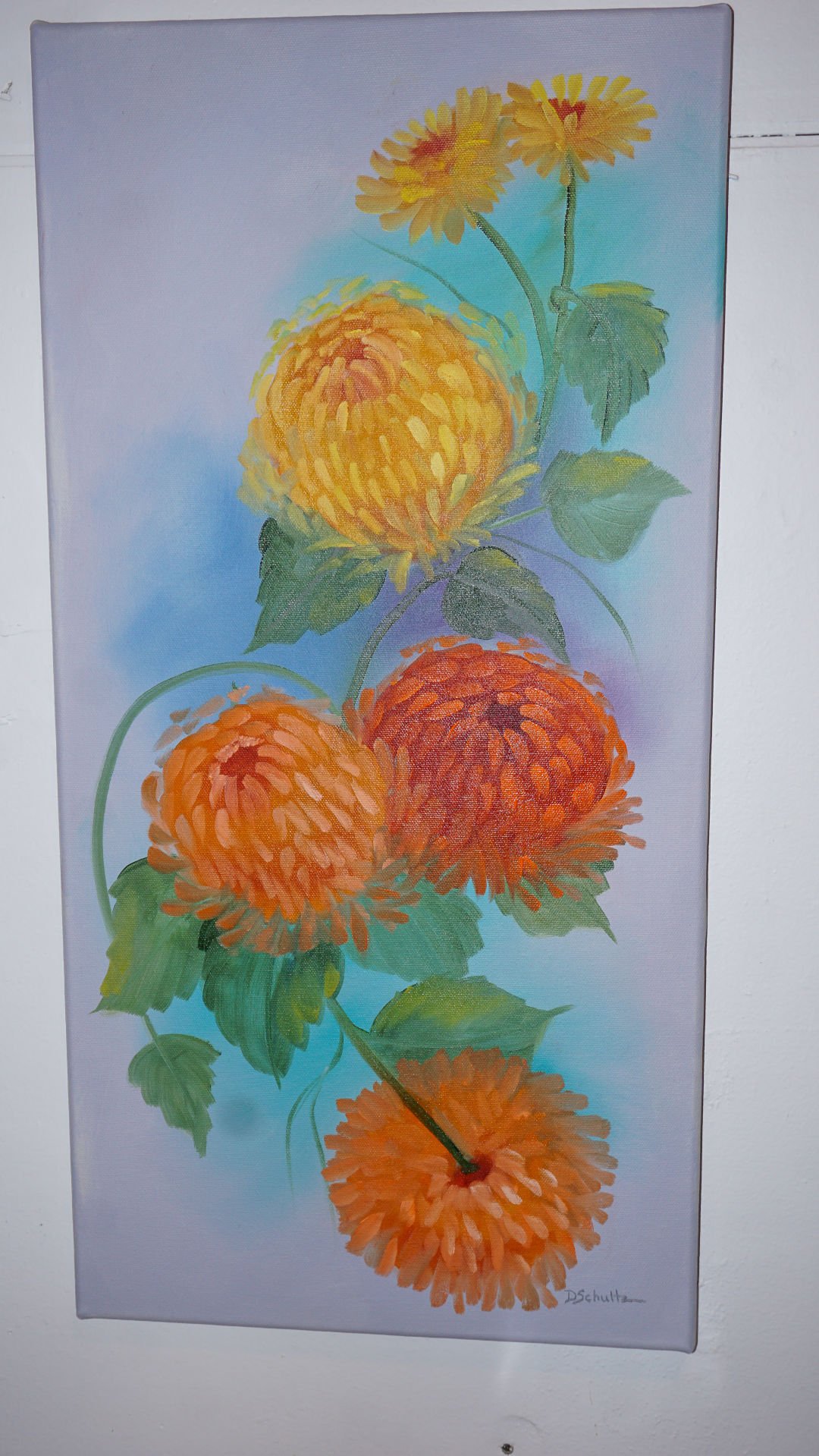 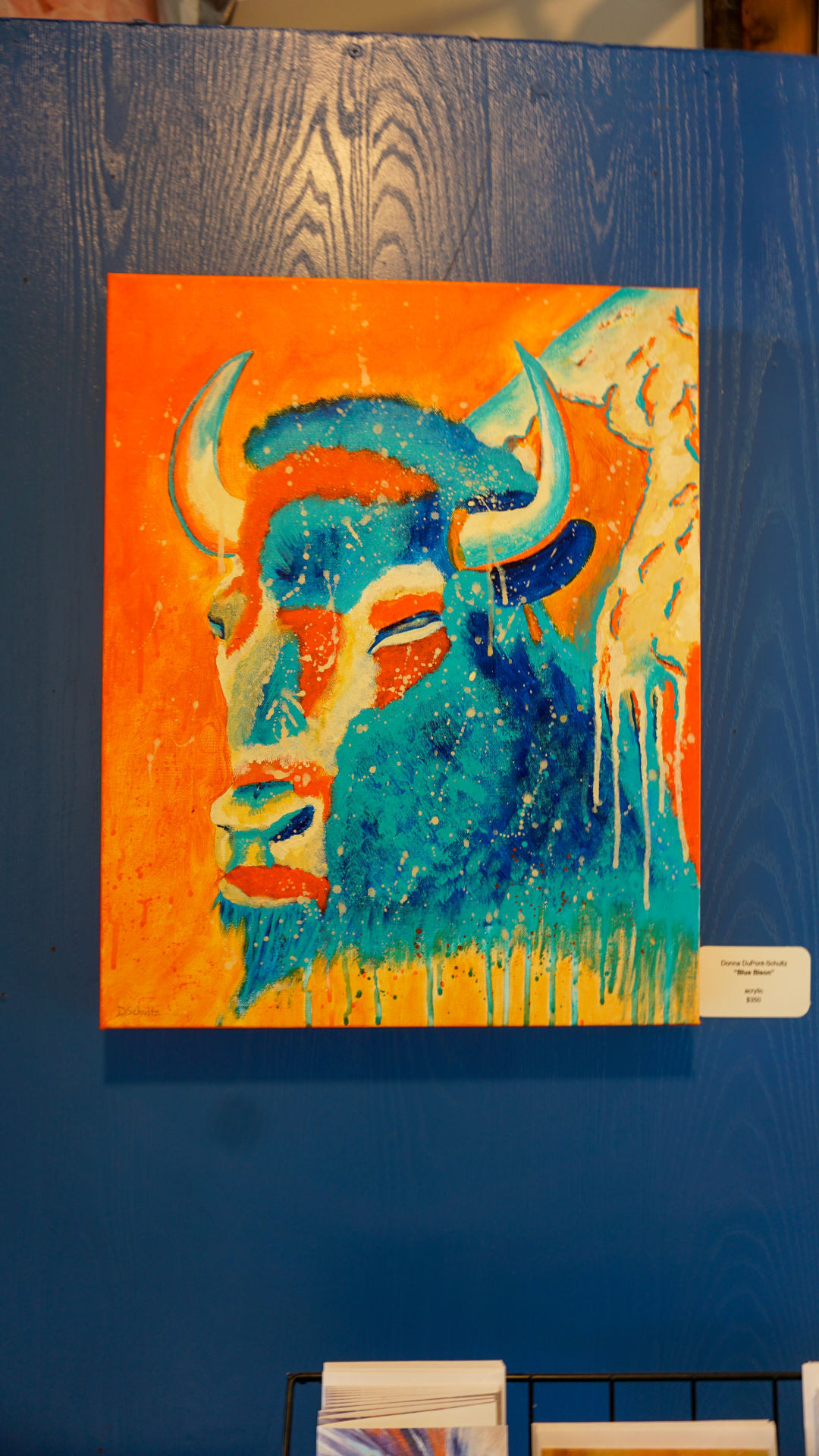 Top: Donna DuPonte-Schultz recently traveled to New Smyrna Beach, Florida, for an intensive floral painting workshop. Now, she’s a Certified Ross Instructor and can teach floral oil painting classes in his style. Bottom: In this example, the buffalo is based on the real animal, but the colors are not. Courtesy/John Schultz 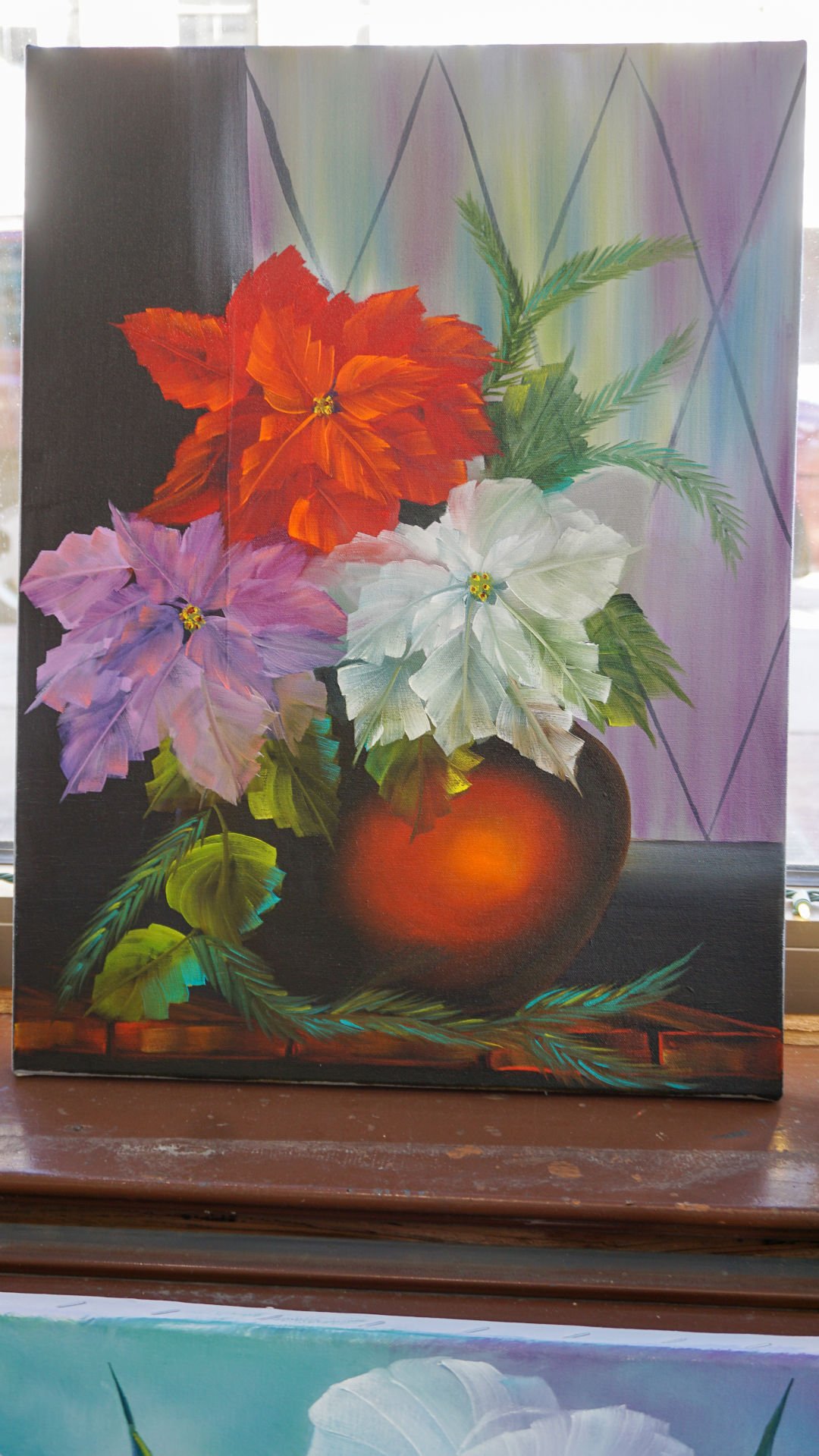 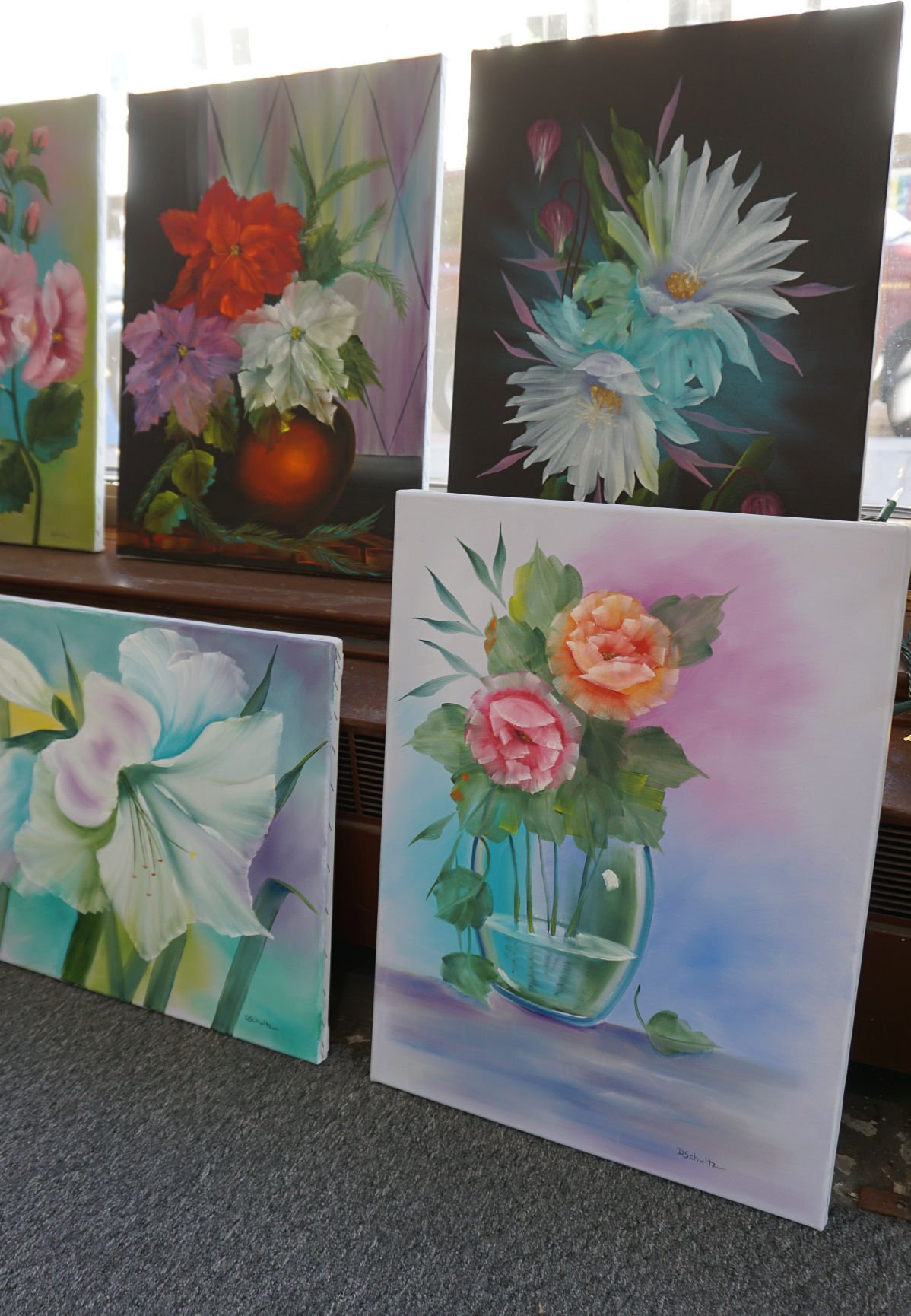 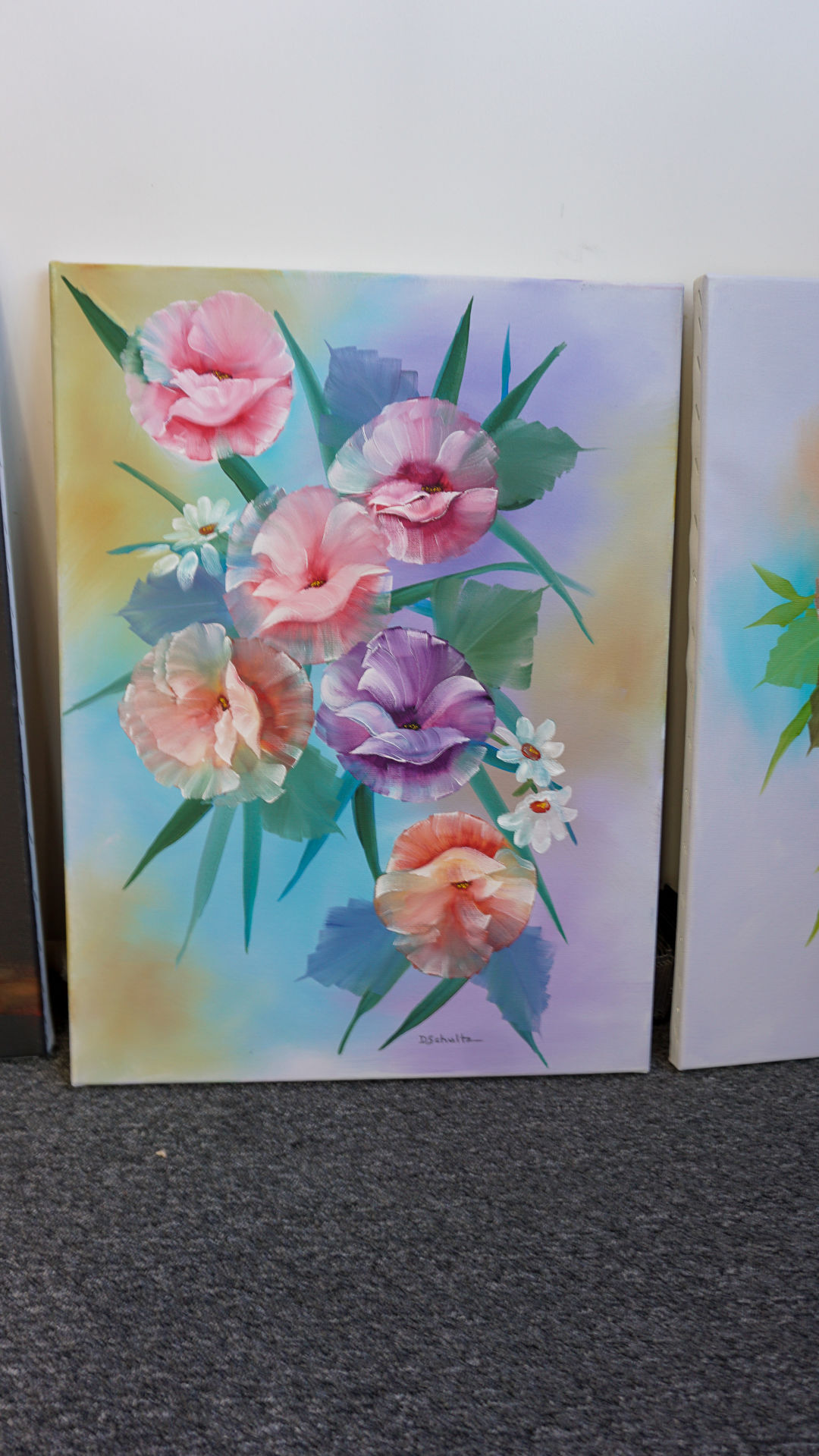 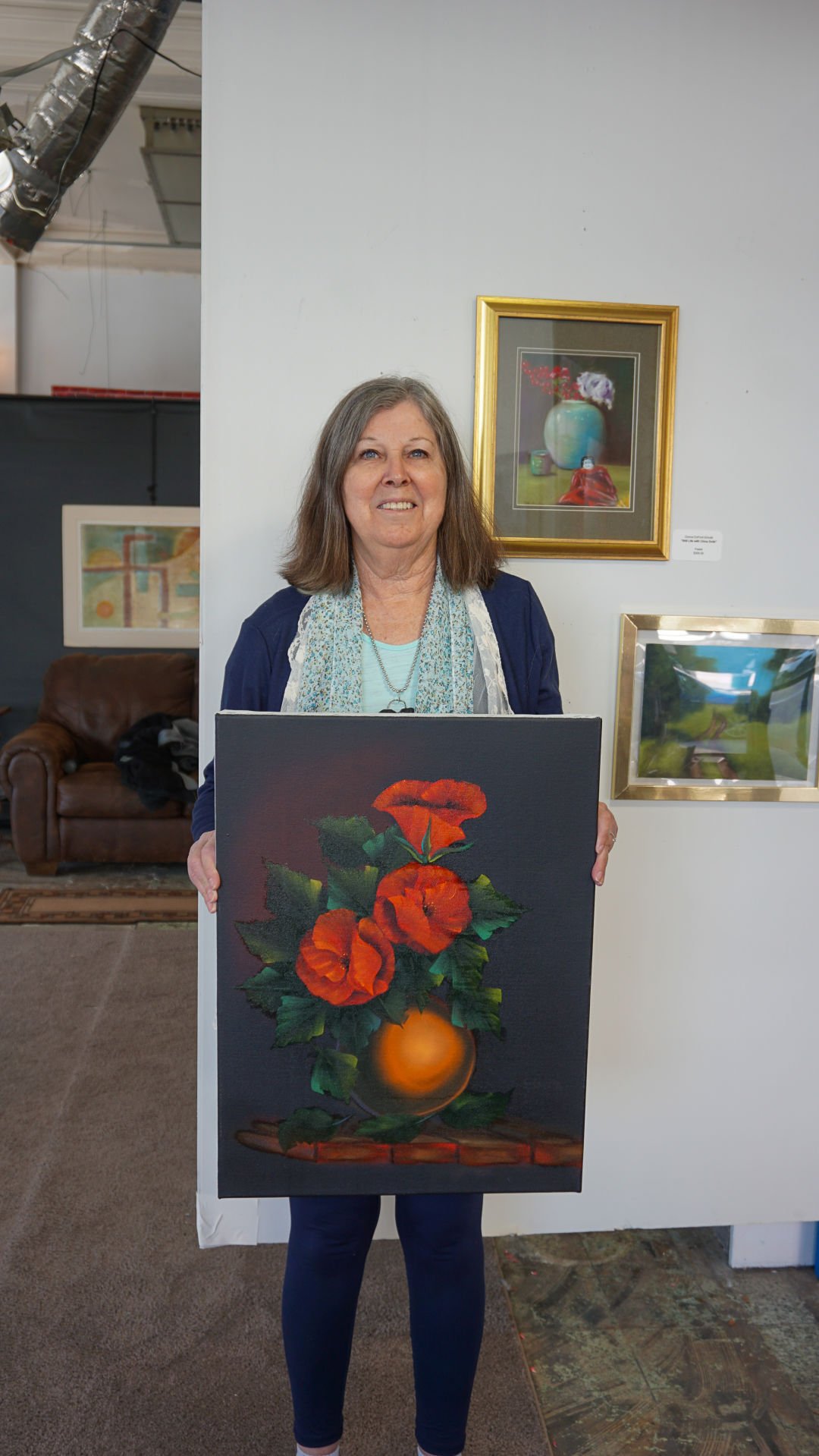 Donna DuPonte-Schultz is the newest resident artist at Art@TheHynds, where she is now certified to start teaching Bob Ross painting classes. Courtesy/John Schultz

Top: Donna DuPonte-Schultz recently traveled to New Smyrna Beach, Florida, for an intensive floral painting workshop. Now, she’s a Certified Ross Instructor and can teach floral oil painting classes in his style. Bottom: In this example, the buffalo is based on the real animal, but the colors are not. Courtesy/John Schultz

Donna DuPonte-Schultz wouldn’t be the latest Art@The Hynds exhibitor if it weren’t for tragedy.

Two years ago, DuPonte-Schultz lost her daughter, Allison, to suicide. She couldn’t bring herself to pick up a paintbrush for the next year, but six months ago, she heard a spot was opening up at the downtown studio/exhibition space. She jumped at the opportunity.

“If she hadn’t passed away, I probably wouldn’t be here,” she said. “But it pushed me to go deeper into myself and delve deeper into painting. And then it was a godsend that they had this space opening.”

Walking into the southeastern corner of the artist collective is like watching the inner workings of DuPonte-Schultz’s brain spill onto canvas (or manifest in three-dimensional form). Her work spans several styles and mediums, but one overarching theme is an affinity for color and outdoor symbols and scenes – particularly florals, which was one type of painting her daughter loved to do (and several of Allison’s own works are on display in the space).

It was about 10 years ago when DuPonte-Schultz got serious about painting, and moving into the Art@The Hynds space encouraged her to also get serious about teaching. She loves helping her students realize that they can create something beautiful, even without prior art experience, and that’s one of the reasons she was attracted to the Bob Ross program after taking a class led by a Certified Ross Instructor about six years ago.

“I love the ‘aha moment,’ when students realize that they really can paint,” she said. “Most of the people I teach don’t know how to draw or paint, so that’s my forte, and that’s where Bob Ross comes in because he believed the same. … I like the whole idea that someone who’s never picked up a paintbrush can complete a painting and be happy with it.”

As far as DuPonte-Schultz knows, she’s the only Certified Ross Instructor in Laramie County – and her source is a few students from one of her non-Ross classes (she also teaches classes such as acrylic and pastel painting) who mentioned the only way they’d been able to get that kind of instruction was from a Fort Collins, Colorado-based CRI who was commuting to Cheyenne until recently.

Once he stopped instructing, she saw a hole in the artistic learning opportunities in southeast Wyoming. She decided to fill it, and in March she’ll receive her Bob Ross certification in landscape painting, thus further expanding her class offerings.

When DuPonte-Schultz isn’t teaching, she’s focusing on a variety of different works she usually has going at once. Currently, she’s producing several gourd ornaments that she burns and then paints on, as well as some steampunk-style mixed media (mostly metal) pieces made of old keyholes, faucet handles and other household items she’s collected from flea markets.

Some might find it unusual for an artist to go from detailed floral paintings to three-dimensional, rusty structures made of washboards, but the evolution of her style came out of the period when she first returned to painting after Allison’s death. After that first year, she was still deep in the grieving process and needed a way to express herself, so she decided to start throwing some paint on a canvas – literally.

“That’s how I got into these abstracts, because I didn’t have to think about it,” she said. “It really helped me. It just gave me a purpose … I needed to do something for myself.”

As a former makeup artist for TV and movie productions in Los Angeles, DuPonte-Schultz is no stranger to making magic with a brush. Much of her work was in special effects makeup during her time in her home state of California, and she said many of those skills transferred into even the most abstract of her current work.

“I would transform someone’s face into something completely different,” she said. “It was three-dimensional work. And I do some three-dimensional work now with metals and on the gourds. It’s really a different kind of art form, but I’m still painting (when it’s) on the face, or using textures, which I use on my paintings.”

One of those overlapping techniques is composition, which she argues is integral to anything you paint, including abstract art. Just like in her makeup artistry experience, in her current work, she picks the subject, picks the colors and then moves forward until it all starts to come together. Sometimes she gets stuck, DuPonte-Schultz admitted, but it all works out once she’s committed to producing something.

Like most galleries, Art@The Hynds is struggling right now. DuPonte-Schultz is hoping that her classes can bring some support to the space, particularly because selling her art is not her top priority. She’d much rather focus on producing art and helping others discover the joy of painting – particularly during a time when we could all use a creative outlet.

Now, her mission is to help others obtain their own sense of self-confidence.

How to get started

If you're interested in taking one of Donna DuPonte-Schultz's classes or seeing her work in person, you can visit her at her gallery/studio.

When: Noon-5 p.m. Thursday, Friday and Saturday (or whenever you walk by and there happens to be an artist working)