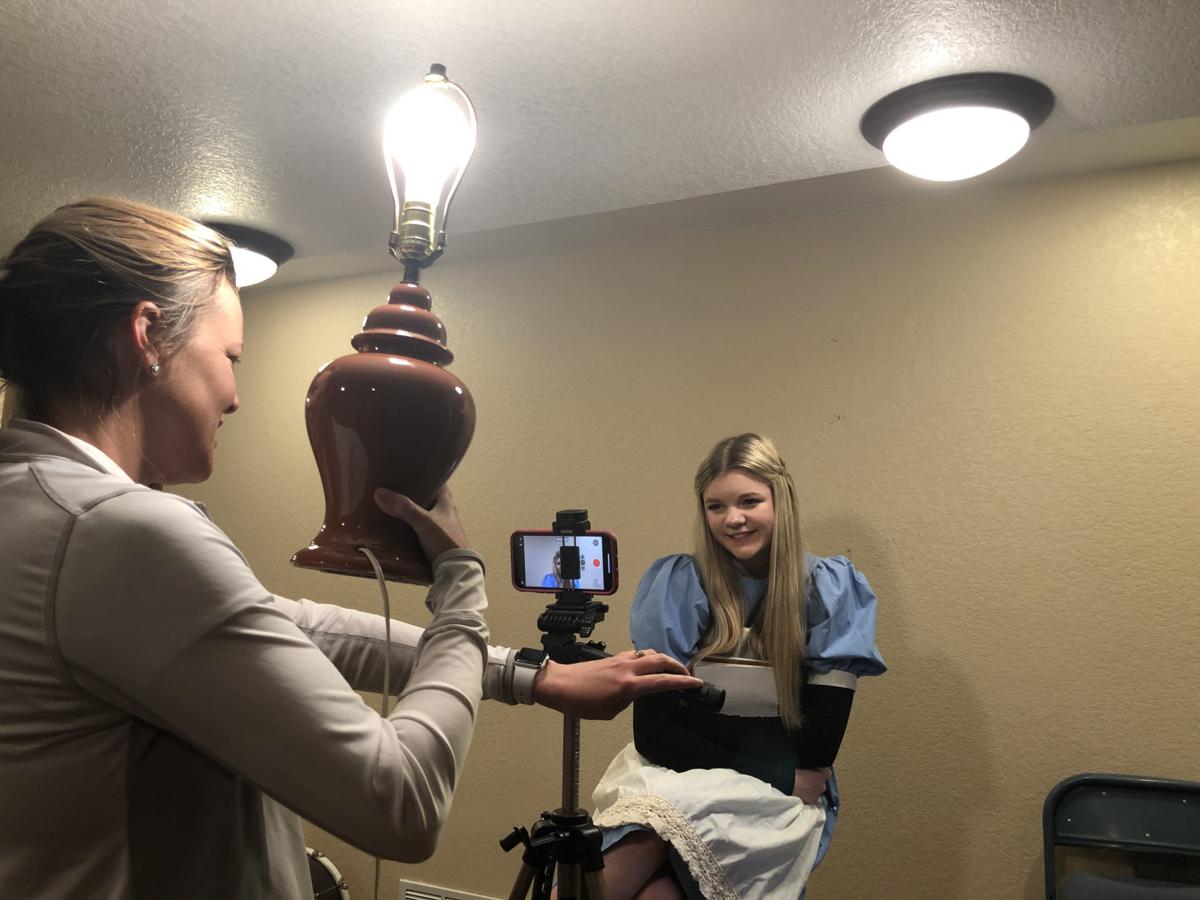 Elena Phillips performs as Alice in her home studio. Courtesy 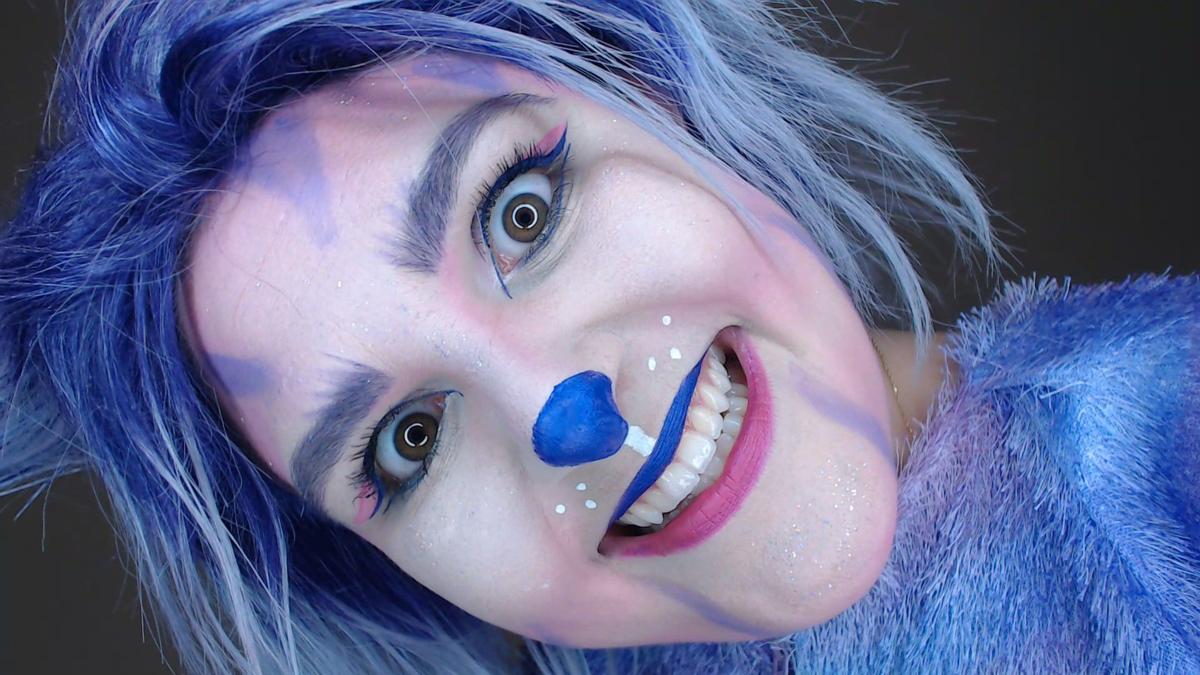 Elena Phillips performs as Alice in her home studio. Courtesy

What happens when you cast a play of 35 stage artists right before a global pandemic hits? You teach them how to become film actors.

That’s the journey the cast of La-De-Da Performing Arts’ upcoming production of “Alice in Wonderland” have been on since late March, and the result will be a completely digital theater experience June 26-28.

The Fort Collins, Colorado-based group is co-directed by Dulcie Willis, who said this experience has been perhaps the most atypical of all the theater’s productions.

“We have a lot of high-risk folks – immunocompromised folks, so we had to figure out how to make that work so we weren’t meeting with 35 people in a small space every week,” she said. “They had no idea what they were in for. They had no idea where we were headed and some days neither did we! We were super nimble in figuring it out as we went along.”

Willis added that at one point, they had four different plans for how to handle this unexpected road block, but giving up was never one of them. She’s just thankful the cast was so willing to pivot to plan D (or E, Willis can’t remember) and create a film as a healthier option that wouldn’t require any gathering.

The first step Willis and co-director/co-owner Heather Ostberg Johnson took was moving all company rehearsals to Zoom. Nobody was allowed in the rehearsal space, so the most logical decision was to meet via webcam.

However, Willis said it took a great deal of trial and error to make these meetings happen. Many members of the cast had never used Zoom before, and for the child actors, their parents had to essentially become their personal IT specialists.

“They were dealing with so much with online schooling and for them to come back online for rehearsal … get the computer going, make sure the connection was strong, just for rehearsal, and then write down what the expectation was and then transition to the recording piece of how to make it look good on their camera – huge shout out to the parents,” she said.

The directors broke up the cast by age (via an elementary and pre-teen group, a teen group and an adult group) for most meetings so they didn’t always have 35 actors on Zoom at the same time, but occasionally they did have to get everyone on a call at once.

Once on the call, the first focus was teaching everyone how to act for the camera, which is a quite different technique than acting for the stage, Willis pointed out, because even the slightest facial movement will be caught on camera, whereas on stage it’s all about body language so people in the back of the theater can still see what kind of emotion you’re trying to portray.

“We brought in a professional screen acting coach (Mary Beth Eversole) and we also had to talk everyone through how do you use a camera, where should it be, and that was like all of April and early May,” Willis said. “We met six hours a week with our actors and were basically trying to communicate over Zoom how to do all of this and then get them ready to film on their own. We weren’t in the room when they did the filming.”

Teaching the cast over the computer was a whole new challenge for Willis and Ostberg Johnson because they’re used to sharing a space with their cast members and being able to get up and show them exactly where to stand, where to put their arm, etc. But Willis is confident they still got their points across.

Once rehearsals were over, it was time for the performers to practice on their own until they were ready to face the webcam. Everybody had to tape themselves (often with the help of a parent) and submit their video in the beginning of May.

Of course there are several challenges that come with self-taping, but perhaps the biggest was these actors didn’t have their scene partners in the same room as them, Willis said. To make sure the scenes still appear to be a conversation, everyone had a reader off to the side or behind the camera to read the other parts – shoutout to those parents, partners and other friends or family members who helped in that regard, she added.

“It was kind of cool though, to get everyone’s family members involved, because they aren’t typically involved (in shows),” she said. “You leave the house and go to rehearsal and are away for three hours a night, and they don’t know what you’re doing until they see the show, so it was cool they could be supportive this way.”

Because the actors couldn’t meet on stage or in another location to film, they had to find a blank wall in their home to record against. This gave Jesse Nyander, the professional editor the theater hired for the project, an untarnished canvas to work his movie magic on, Willis said.

Although they didn’t have scene partners or a set to work with, the cast members did have one traditional theatrical storytelling element: costumes.

Around mid-April, Willis and Ostberg Johnson got together with professional costumers Cathy Haldeman and Kelly Trupkiewicz to make a plan. They decided to use costumes that reflect the traditional imagery of “Alice in Wonderland” (a blue and white dress for Alice, crazy colorful hat for the mad hatter, etc.), which had been stored in a basement for several years.

Cast members sent in their measurements, and the costumers did their best to fit the garments to their assigned actor.

Although it was nearly impossible for the coronavirus to be attached to their surfaces, to be extra cautious, Haldeman and Trupkiewicz steam disinfected all the pieces, wrapped them in plastic bags and then split them up with the co-directors to hand deliver them (in a contactless manner) all across northern Colorado.

It took a whole afternoon to drop every costume off at each cast member’s home, but Willis is glad they did, because they make the scenes look much more theatrical and less like someone talking at a webcam – even though the costumes will mostly just be seen from the waist-up.

One critical element the actors had to figure out themselves is makeup. Willis said the theater would normally hire professional makeup artists for a show, but given the current circumstances, performers were on their own.

Actors also had to find their own props, and Willis said she’s beyond proud of their flexibility and willingness to do what it takes to find the right items. They did have a little help, however.

“We had one student who was super into tech and we figured out how to include her,” Willis said. She was sort of the production manager – she helped gather materials that we needed, she helped track things for us, we taught her how to do spreadsheets … She made prop lists for us so all the actors could track what they needed and what scenes those props appear in.”

Putting it all together

Nyander got all the videos from the actors in mid-May, so since then, he’s been piecing everything together to make one full-fledged cinematic production.

“As you can imagine he’s got 35 different characters who are basically all head and shoulder shots,” Willis said with a little laugh. “He has to put all of those together and still make it all interesting. .. He’s adding in some effects, we’ve got some fun music underscoring and it’s actually really engaging to watch considering these people moved everything in their living room for a blank wall.”

He’s been given about a month and a half to edit, which is quite quick for a project of this length, Willis said. Although it was a daunting task, the editor told her he’s enjoying the creativity that comes with recreating Wonderland in the living rooms of various actors.

He will work on the final product until June 21, and then the big premiere is June 26. Willis is happy with what she’s seen so far of the film, but said she’s super eager to release it to what’s sure to be an even bigger audience than the group is used to having for their performances.

“Something else we’re really excited about is we have people buying tickets to watch this from all over the world and I don’t think we would get this exposure with a regular stage play,” she said. “We have people buying the link to view the show from California, Texas, Minnesota ... Canada and the U.K.”

And the final product that this diverse audience will experience is sort of perfect for the current state of the world, Willis added.

“It’s been serendipitous because we really have gone down the rabbit hole, we are living in a world we don’t recognize anymore and everything seems really bizarre and crazy,” she said. “And like Alice, we have to figure out how to accept it or not accept it and be OK with things.”

What: La-De-Da Performing Arts' digital production of "Alice in Wonderland"