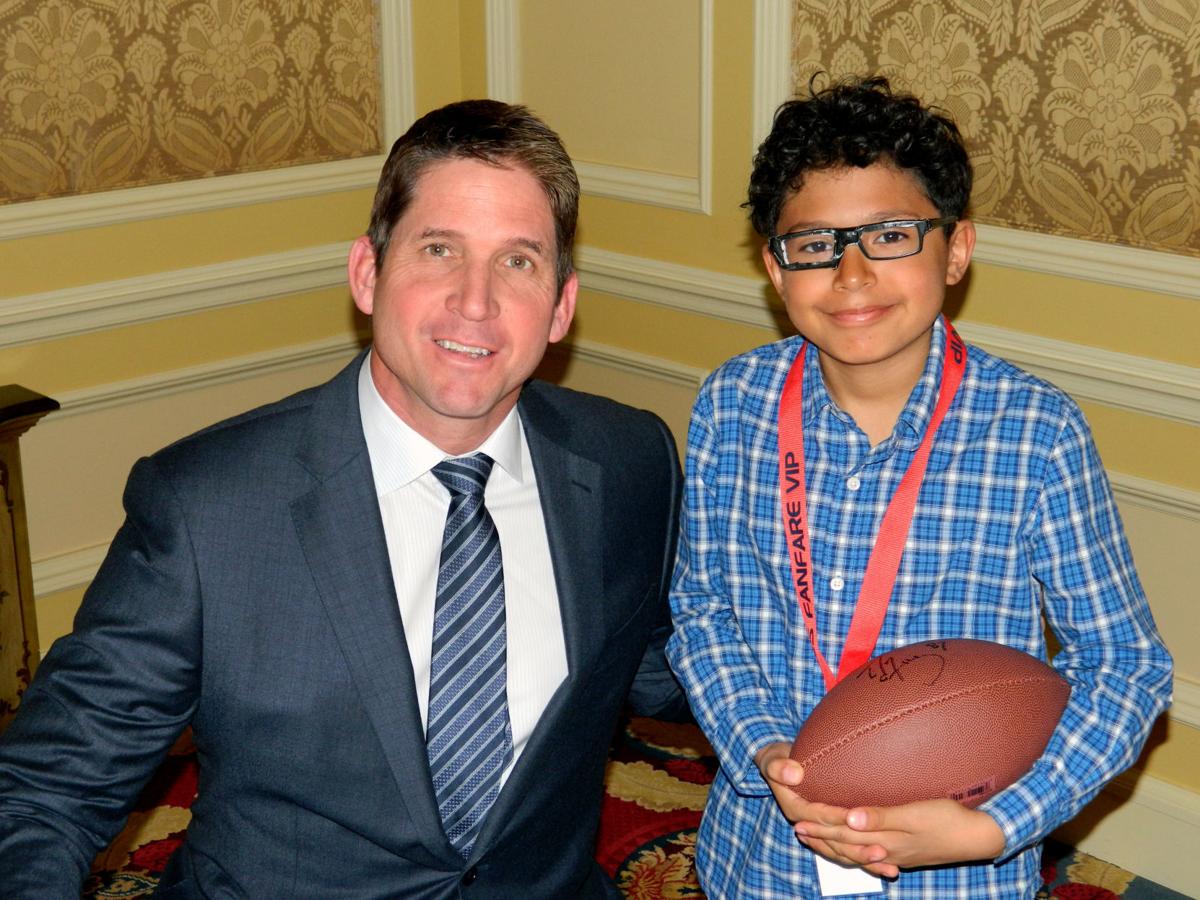 Ed McCaffrey was the guest speaker at Fanfare for Education 2017. Courtesy 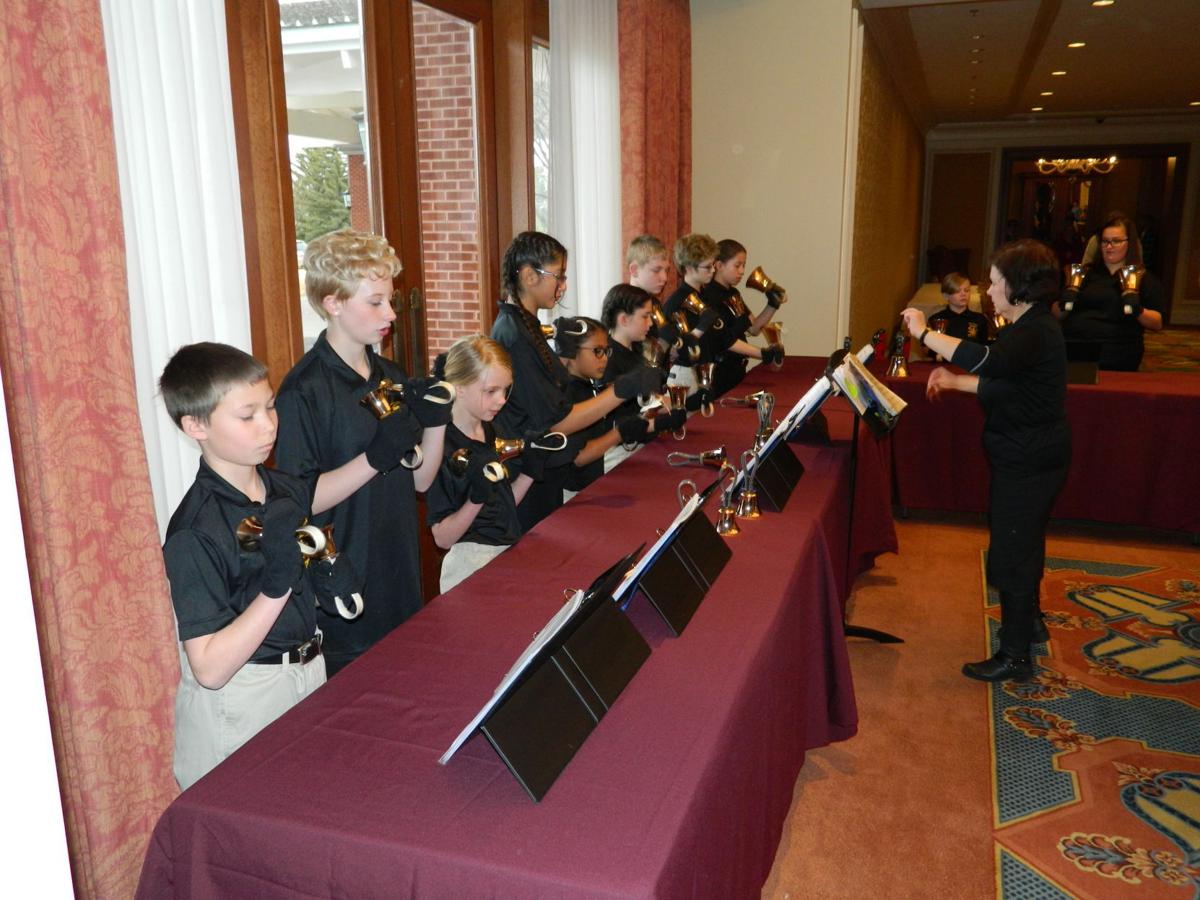 St. Mary’s Handbell Choir performs for guests during check-in at a past Fanfare for Education event. Courtesy 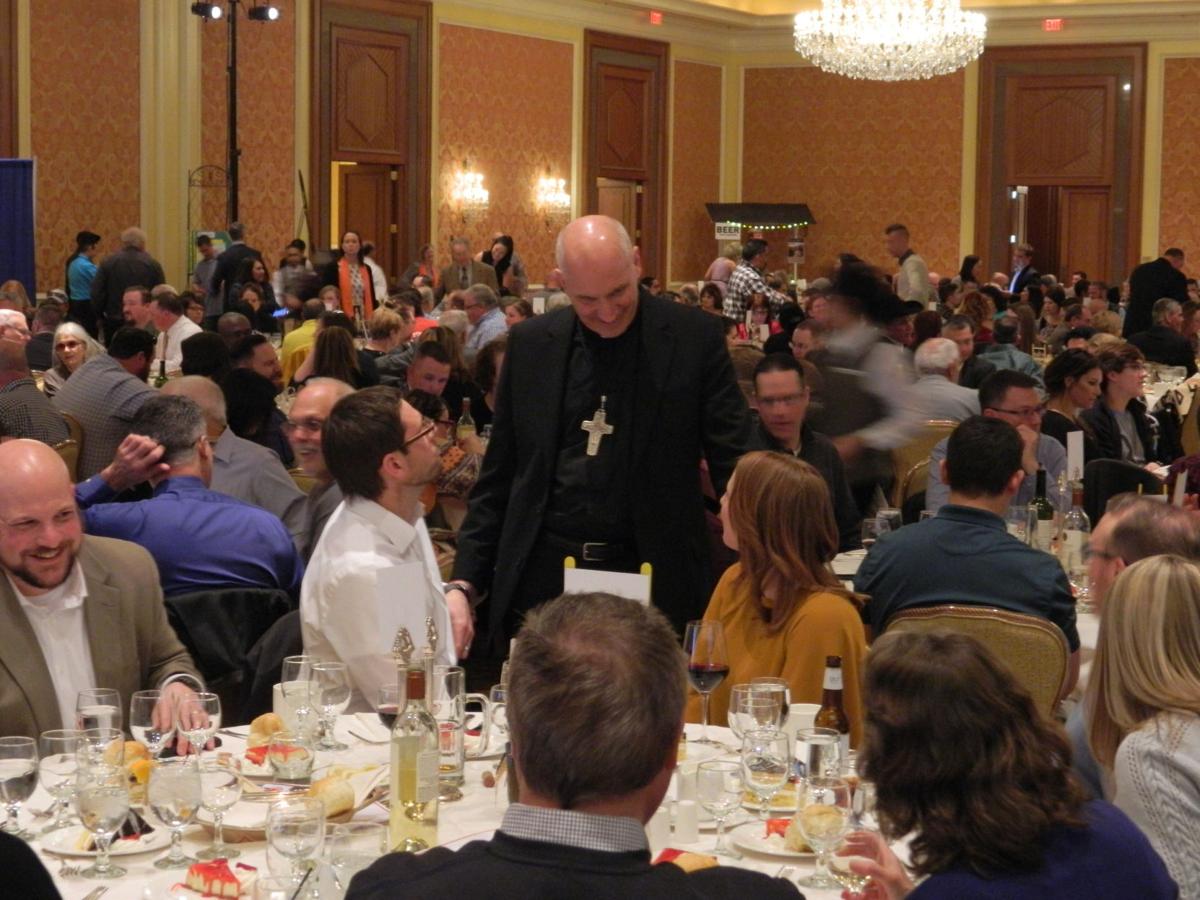 Ed McCaffrey was the guest speaker at Fanfare for Education 2017. Courtesy

St. Mary’s Handbell Choir performs for guests during check-in at a past Fanfare for Education event. Courtesy

Fundraisers are the lifeline of every nonprofit. Without events to encourage support for their respective causes, these organizations simply can’t function properly.

In the era of COVID-19, nonprofits are currently forced to find new ways to raise crucial funds without gathering in large groups and raising public health concerns.

St. Mary’s School Foundation and St. Mary’s Catholic School rely heavily on money raised at their Fanfare for Education event every year. So when gala venue Little America Hotel and Resort told organizers last month that they couldn’t host the event in the ballroom, Beth A. Thompson, the school’s marketing director, found a creative solution.

Although completely out of their element, Little America was on board, and the 27th annual Fanfare for Education became the “Mask-Uerade” Ball.

Guests will arrive between 6 and 7:15 p.m. Friday, June 13, for the kickoff to the event, the Drive Thru Dinner & Wine To Go under the east awning area of the resort. Parent volunteers will greet the guests as they drive up, hand them their meal and bottle of wine, and offer them the chance to enter one of several raffles.

Raffle items will be on display, and the crown jewel of them all is a 2020 Subaru Crosstrek 2.0 Premium donated by Halladay Subaru. Anyone who buys a $100 “ultimate” raffle ticket is eligible to win either the car or one of four cash prizes ($5,000, $2,500, $1,000 or $500), but Thompson said there will also be a 50/50 raffle and Last Man Standing game (the winner of which picks whatever they want off the live auction).

Former NFL player (and current TV/radio sportscaster) Mark Schlereth was originally booked as the speaker for the fundraiser, and Thompson said she was overjoyed when he agreed to give his speech over livestream at 7:30 p.m. the evening of the “Mask-Uerade.” He’ll also still participate in the small, 25-people-at-a-time VIP meet and greet for ArchAngel sponsors at 5 p.m. in the Yellowstone Room of Little America.

The silent auction has also gone entirely online, and the live auction will take place via livestream from 8:30-9:30 p.m., with photos displayed to showcase the items.

Thompson said the idea is for guests to grab their meal, pay for some raffle tickets and head home to enjoy the rest of the event virtually from the comfort of their couch.

“My husband and I go to a number of fundraisers at Little America, and it’s not that we don’t love it, but the thought of doing it all from home sounds great!” she said with a laugh.

It wasn’t easy to adapt to this model – Thompson said it was hard for her to accept they wouldn’t be able to do the event in the ballroom with fewer people at tables six feet apart – but she praised the volunteers for being flexible and jumping on board to help out however they can.

She has no idea how it’ll all go, Thompson admitted, but the event is too important to St. Mary’s to cancel entirely.

“With us being the first ones to do it, there will be some little glitches,” she said. “It is what it is, and you make the best you can of it. … I’ve had people call and say, ‘Your new idea is fantastic, this is awesome,’ so that’s rewarding because it’s overwhelming. But when you have people who have bought tickets for years say they’re happy, that makes it worth it.”

In early April, the Wyoming Breast Cancer Initiative board of directors decided it wouldn’t be safe to hold the organization’s annual Pink Ribbon Run, particularly because it’s an event that usually brings out several breast cancer survivors who might be more at risk. Board member Laurie Heath said a cross-state committee of about 35 people created a new event on the fly: the Pink Ribbon Fun & Run.

“The logo is a flamingo, and the theme is ‘Flock Together: 5K Your Way,’” she said. “It could be a competitive walk or run, it could be trampoline (jumping), biking, kayaking, etc. … we’re encouraging people to register and get a group of people who can do something from Aug. 1-9. During those nine days, we hope we can create synergy all across the state.”

That latter part, making the Fun & Run more of a statewide effort rather than Laramie County-specific, is one of the biggest goals of this year’s event. Heath said the organization is leaning into the digital element as a means of connecting with people far and wide, and one thing they’re working on is having a breast cancer ambassador in every county via a call on social media. If they can build a presence in all of Wyoming’s 23 counties, she said, the board believes the nonprofit can boost awareness of its mission and spread the word that funding is available for mammograms and diagnostic testing in every county.

Another goal is to partner with as many small businesses as possible to bring awareness while helping those most severely affected by the COVID-19 pandemic to bounce back.

“Dillinger’s in town – they have these cocktail boxes, every one for $35, and they’ll give $5, so they get something, but also give back,” Heath said. “It’s helping local businesses get business back, but also get (the nonprofit) something back, too.”

A third goal is to reach as many Wyomingites as possible. By not limiting it to walking and running, Heath said the board hopes to show that anybody can participate, regardless of age or fitness level, all while also ensuring they’re not contributing to community spread of COVID-19.

The goal, she continued, is to make the event a little more enticing for those who might not normally be interested because they’re not walkers or runners. By allowing various forms of participation, participants can do everything from jog five miles to bake five cakes.

Those who enjoy the competitive aspect need not worry, however, because she said the organization is creating an app where participants can log their miles and work toward being featured on the leaderboard.

Heath recognizes that there are plenty of virtual events going on right now, so it’s hard to find ways to stand out and motivate people to participate in the WBCI’s. But she’s confident that the group’s partnerships with local businesses, flexibility in participation forms and even some fun additions (such as flamingo yard signs to mark which houses are “flocking together”) will get people excited.

“It’s actually been kind of fun to use this virtual platform … it’ll take a lot of marketing, but we have a lot of creative people on our team, so we’re pretty excited,” Heath said. “I think with COVID, people are afraid to go to the doctor for a yearly physical, so we’re really hoping by the end of the year to create some events that will encourage people to do this preventative medicine and cancer screenings because that’s our motto – cancer doesn’t stop, so neither do we.”

The Fur Ball is Cheyenne Animal Shelter’s biggest fundraiser every year, but the 2020 installment was originally scheduled for the very beginning of the pandemic: March 14. It was then rescheduled to July 31, but late last month, the shelter announced Fur Ball was going completely virtual.

“We were so looking forward to getting together with all of our friends and shelter supporters this summer to celebrate our 50th anniversary,” CEO Sue Castaneda said in a news release. “However, in light of COVID-19 and the need for social distancing, we will not be hosting Fur Ball at Little America.”

Castaneda said by phone that Little America graciously didn’t charge the nonprofit for the cancellation, but the shelter still needed to find a means of making up for those funds that would be lost by not hosting the gala.

So, the Fur Ball committee got together and decided on a one-week online auction that will begin July 24 and culminate in a one-hour live broadcast (method to be determined) on July 31.

“People who we had addresses for, ticket and table purchasers, we sent them a program and said we wanted to get together for our 50th anniversary but we can’t, so we’ll do a virtual event,” she said.

Committee members sent programs to these buyers and gave them three options: donate the cost of their ticket or table back to the shelter to create a matching challenge, get a partial or full refund or save the ticket for next year.

Bidder numbers were also sent to ticket or table purchasers by email and by phone, so beginning July 24, they can go online and start bidding on auction items.

“There will be some live auction items, and we’re still figuring out the details of this, but we’re planning to culminate on the 31st, and we’ll have the auctioneer take bids, and in the middle of all of that we’ll hopefully share some great stories that happened in the last year, animals lives that were saved,” Castaneda said. “I don’t know how it’s all going to go … (but) we need this for the foundation to be able to invest.”

So far, the organization has raised at least $40,000 through the matching funds challenge created by the event committee.

Where: Little America Hotel and Resort, 2800 W. Lincolnway and your own home

Cost: $30 to register (can do so as an independent or as a team)

Cost: Only open to previous ticket holders for now