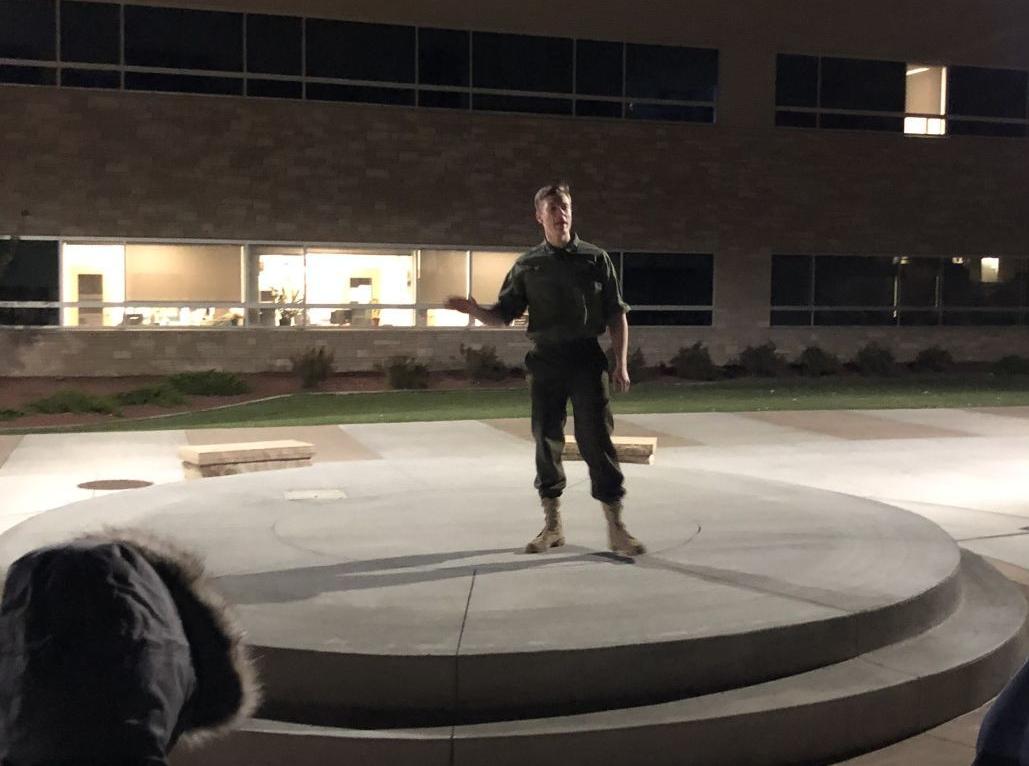 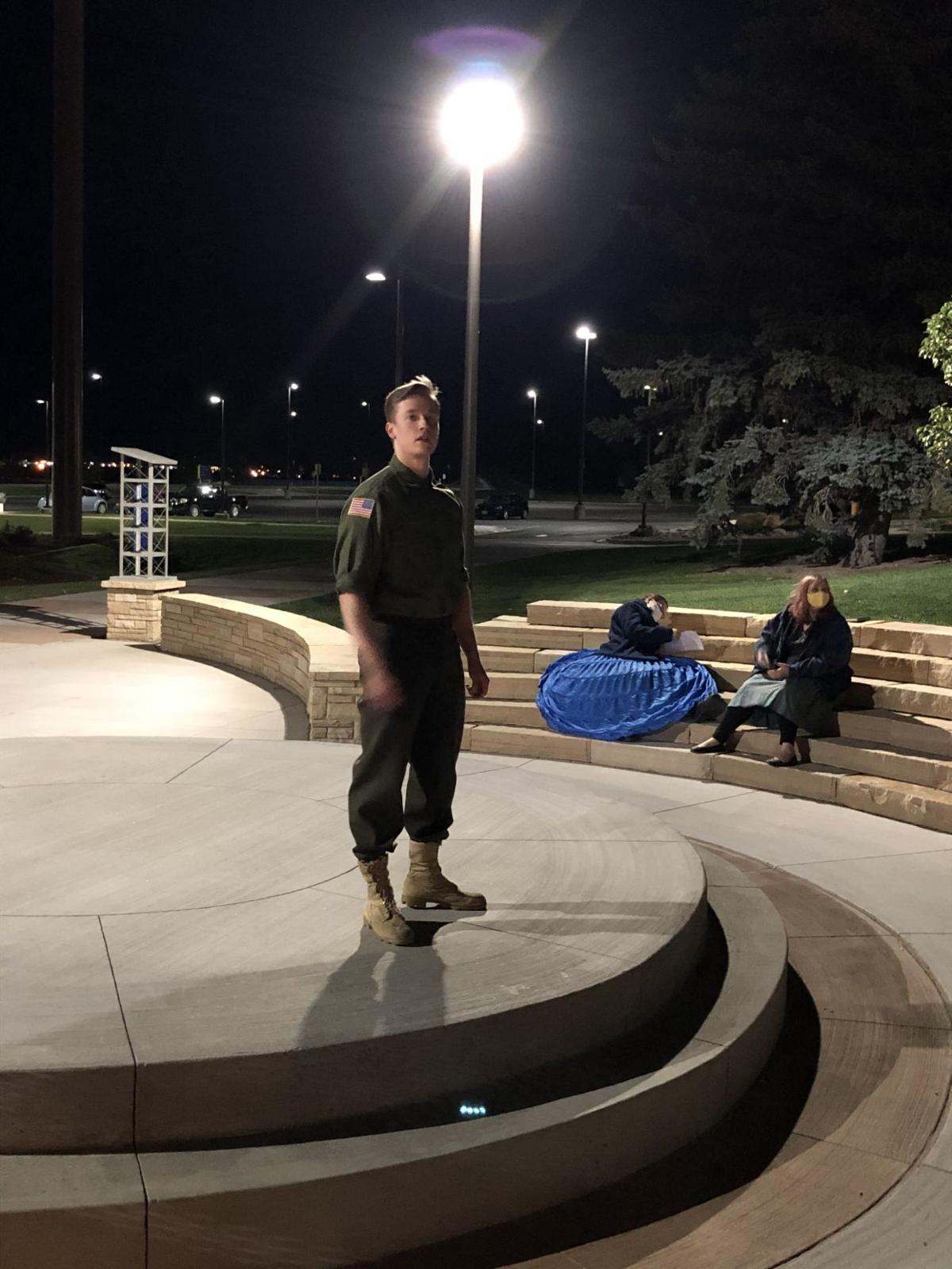 If a pandemic-era performance with proper social distancing were to take place in the LCCC Playhouse, only 20 people would be able to attend. That wasn’t going to work for theatre/communication instructor Jason Pasqua.

“Obviously theater is about large groups of people in the same room, and that’s going to be tough,” he said. “A well-performed play with good acting and good directing is about deep connection to your fellow actors around you, which means we’ve got to be looking at each other, and we’ve got to be staying well inside 6 feet for most of the stories we want to tell.”

So, Pasqua had a problem to fix: how could he put on a production with the students in his theater production course that would keep everyone safe while also maintaining the tradition of an in-person audience?

It had been a while since Laramie County Community College had done anything by Shakespeare, and he figured the first weekend in October was about the last chance that Mother Nature would allow for an outdoor performance, so he planned a series of Shakespearean monologues (and a few two-person scenes) for Oct. 1-3 outside in the college’s McIlvaine Plaza.

Logistically, the production has been quite the learning curve for Pasqua, whose course is one of the few that is still allowed to meet in person under the college’s current COVID-19 guidelines. Those guidelines require Pasqua and the students to wear masks when indoors and within 6 feet of others, and they’ve also inspired the instructor to create a rotating schedule that allows him to work with only the actors on Mondays and Wednesdays and just the crew on Tuesdays and Thursdays.

The show itself mainly consists of monologues (though, of course, the “Romeo and Juliet” scene is still two people) to keep the production as small (there are 12 performers and 14 crew members) and socially distanced as possible. This is a new challenge for some of the actors, who are used to having scene partners, which is one of many reasons Pasqua said this show requires a new kind of responsibility – and, just like all activities lately, flexibility.

“I think that they’ve gotten a little more one-on-one direction, though our rehearsal process has been very fast; it’s been about four weeks,” Pasqua said. “We (normally) rehearse a lot, and, frankly, not to brag, but that’s why we’re so good. That’s why we put quality productions on.

“By working with the actors more intensively, but over a shorter period of time, they have to make choices. They have a piece of text in front of them, and largely they chose their own … and they are the ones responsible.”

It’s always important for actors to come into rehearsal prepared, but that preparation is uniquely critical, Pasqua said, for a show that is challenged with not only a short rehearsal period, but requires actors to project over the sound of Wyoming wind and trucks on their jake brakes.

The actors must also battle the chilly fall weather – especially those costumed in dresses – and not let any potential discomfort keep them from getting into character. But then again, that’s exactly what the original actors of these plays had to do.

“There are no microphones, nor were there microphones in Shakespeare’s time,” Pasqua said. “It’s going to force you to dig deeply into a piece of text … We, in today’s 21st century, we use language in a very utilitarian way. It’s very ‘this is the time, this is the place, let me give you the information.’ Shakespeare’s verse is giving you the information, but it is also calling upon the performer to build for the audience the visual world.”

To help get those visuals across, the production’s stage crew is putting up a small complement of lights that will be hung by a few small pieces they constructed themselves. But other than the lights and some basic costuming, the show is a casual, low-budget approach to Shakespeare that Pasqua believes anyone looking for a reason to get out of the house can enjoy (if they bring warm clothes and a blanket to sit on, that is).

Instead of just a string of monologues, the glue holding the one-hour, laid-back production together will be a series of introductions in between scenes in which Pasqua will give a brief synopsis of the play audience members are about to watch a segment from, and he’ll also read passages from Bill Bryson’s book “Shakespeare (The Illustrated and Updated Edition).”

Those passages describe the plagues and diseases that were all too common in Elizabethan England, aka Shakespeare’s time, which he hopes will drive home the point that humans have been through worse, but humanity – and thus theater – survived.

“It’s a challenging time to be a human, but it’s not the worst, and I think one of the reasons people go to the theater and read literature is to try and feel a little less lonely,” Pasqua said. “We’re social creatures, and we need each other, and the theater has been doing that for 2,500 years. … I think theater people and all creative people are in the business of looking for possibilities, and it’s a cliche, but it’s a true one: the show must go on.”

What: LCCC’s production of “Shakespeare in the Plaza”