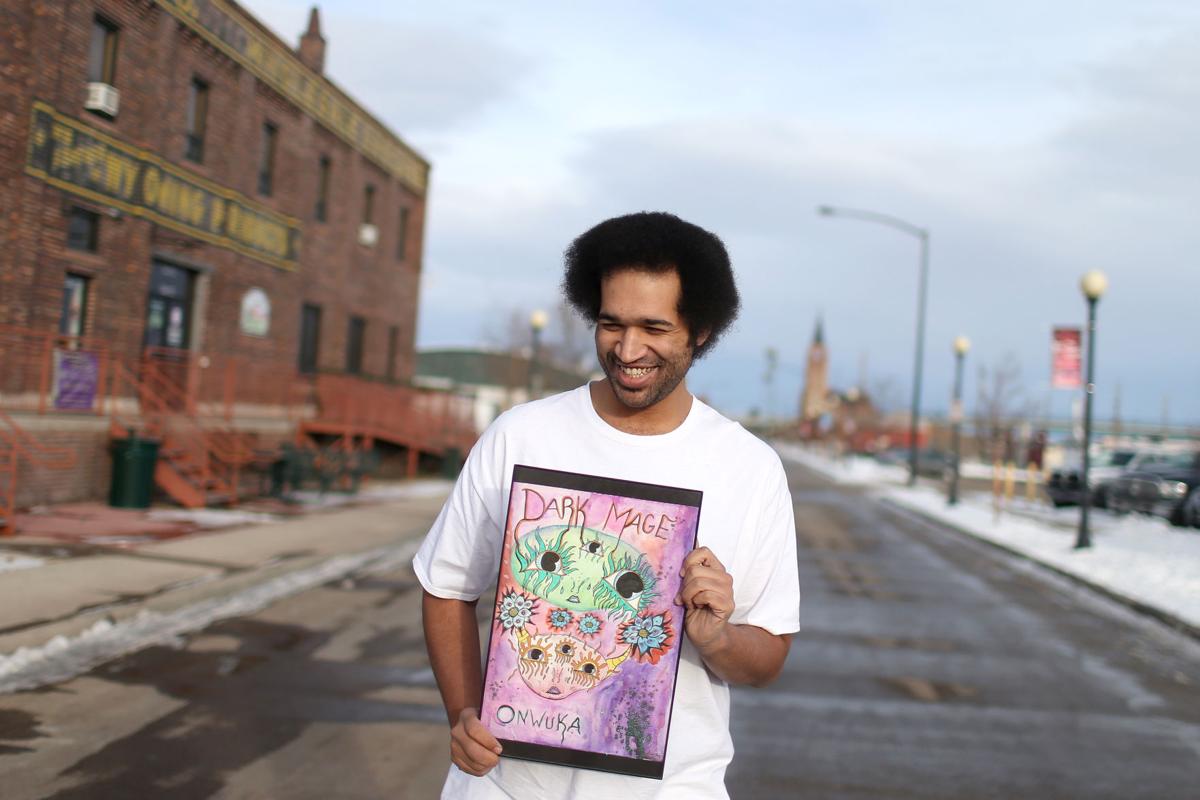 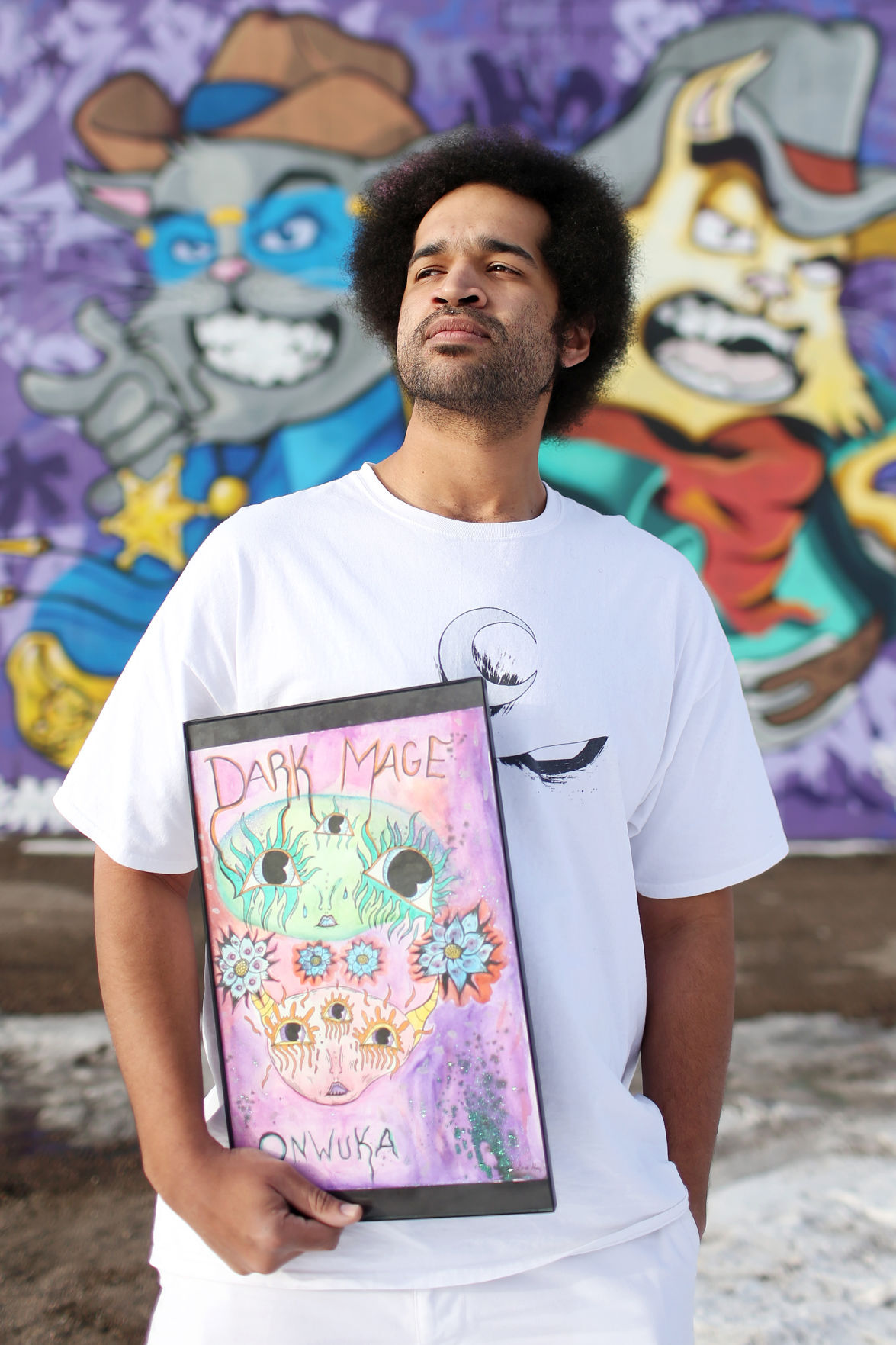 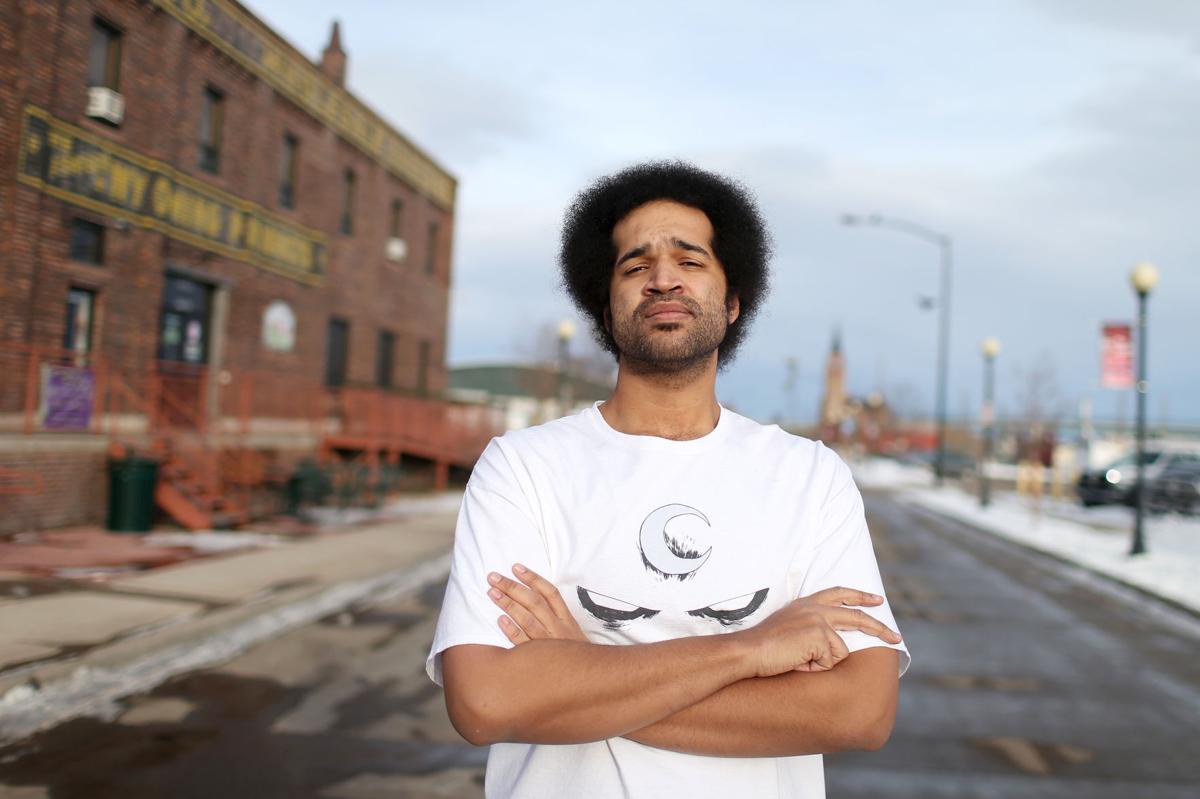 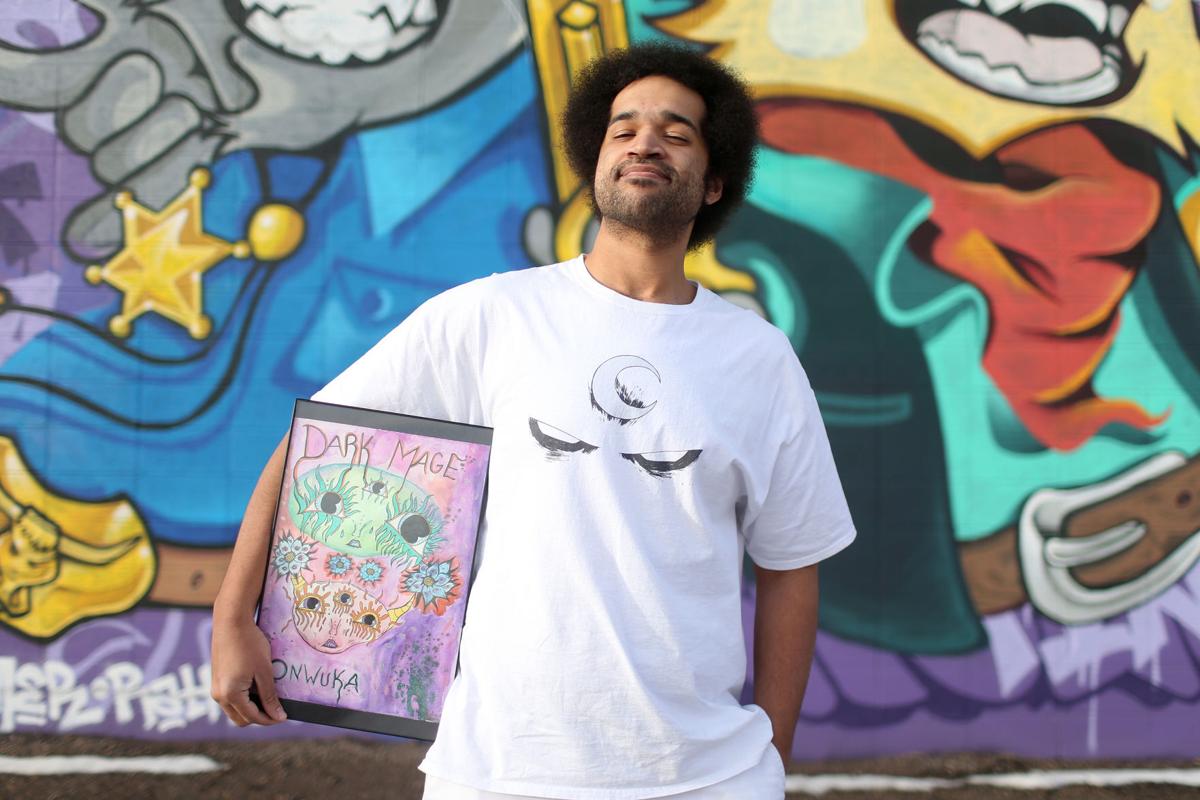 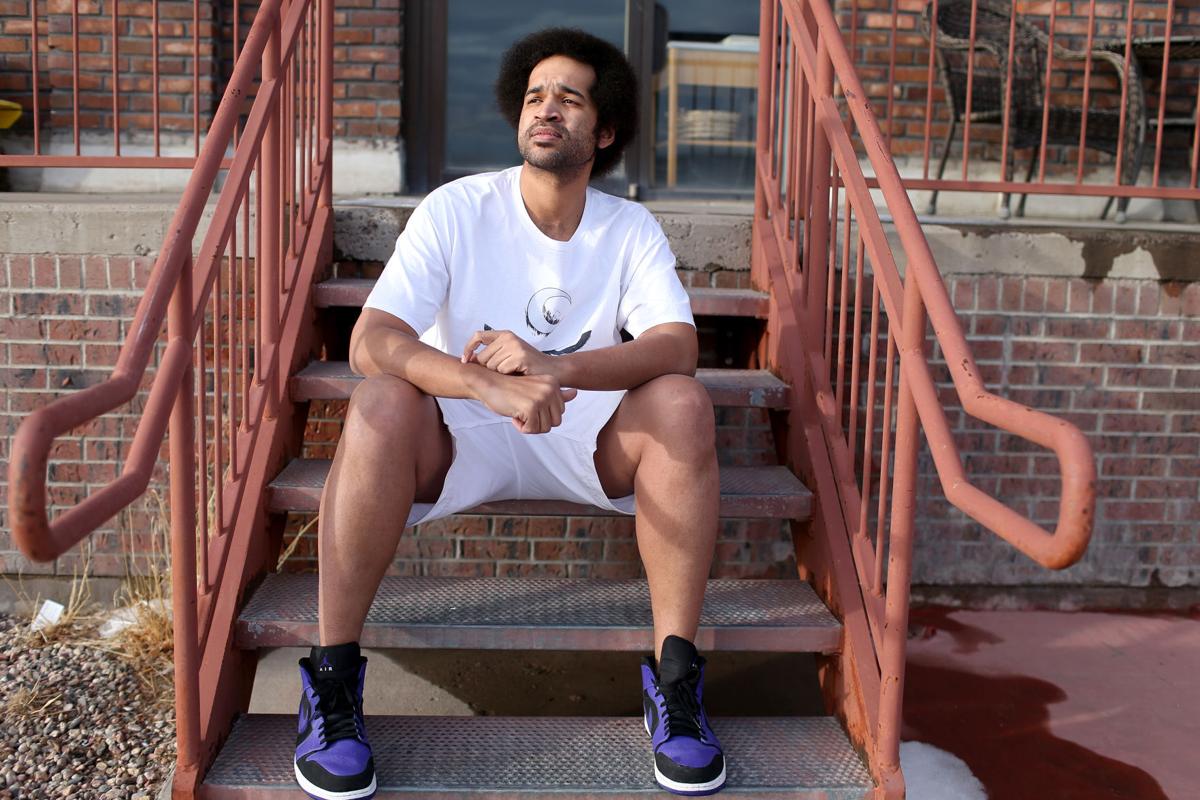 Mark Onwuka Jr. is a Nigerian-American rapper living in Cheyenne. Needless to say, he had plenty of material to fuel his art – then 2020 happened.

A native of Monterey, California, Onwuka moved to Cheyenne as a teen and graduated from Central High School. He recently moved back to Cheyenne after spending some time working a marketing job in Fort Collins, and on Oct. 31, Onwuka dropped his debut EP.

“The EP is called ‘The Grand Chieftain’ because my dad is from Nigeria, and I’m not able to go back there, but technically I’m a chieftain there,” he said. “It’s Nigerian style mixed with my funk mixed with some fantasy elements. … I knew that (‘The Grand Chieftain’) was going to be the concept from the start. An intro track that shows who I am and my style.”

Onwuka gravitated toward music from a young age – his mom often tells the story of the first time he ever walked, which was while a Michael Jackson song was playing. He started rapping around the age of 16, but is the first to admit he could only do basic rhymes at that point. Slowly but surely, he started performing live shows at raves and other music-focused gatherings, but it was always freestyle. This EP is his first chance to start a permanent collection of his own work, unlike the fun yet fleeting freestyles many Cheyenne music-lovers might know him for.

Growing up in California in the ’90s, Onwuka quickly got into funk and rhythm and blues. Later on, his tastes expanded to include West Coast hip-hoppers such as Snoop Dogg. These days, Onwuka cites Chamillionaire, Slick Rick and Nas as his biggest musical influences, but all the genres that have impacted his life can be identified in “The Grand Chieftain.”

He started seriously working on the EP this past spring, and in May, he challenged himself to start writing one song a week. That led to a body of work that he began recording in July and finished in September at Chimaera Sound Studios in Loveland, Colorado.

“It sounds kind of funny to say, but when Kobe died, I was watching a video about loving what you do and I love music, so I was like … I want to at least have something around to show this side of myself,” he said. “I wanted to make it come out on Halloween, and I wanted it to kind of be a weird vibe and trippy style, sort of a Halloween aesthetic, but not full Halloween goth and pumpkin crazy.”

The result is an EP that he believes is a good mixture of his various musical interests with a dash of comedy and pop culture references. “Moon Knight,” for example, is a song that on the surface is about having multiple personalities, but at its core, it’s an entire piece dedicated to a Marvel comic book hero of the same name.

When it comes to writing his songs, Onwuka admits he can sometimes go a little overboard and try to fit in too many words, but overtime he’s learned to balance his songs better. He wrote every lyric on the EP, but musically, he collaborated with EDP-Beats, who produced more than half of the EP.

“In terms of writing, I’m still learning to this day,” Onwuka said.

“Working with engineers, I’m figuring out the best way for the songs to flow. … Hooks and stuff like that, for rap, is a lot more about the words than any other type of music.”

In April 2019, Onwuka made his Fridays in the Asher solo debut after performing in the 2017 series with Josh Gonzales Band. Concert organizer Mike Morris is a longtime friend, and always quick to sing the rapper’s praises.

“When it comes to Mark’s music, I think he’s pretty swashbuckling, going way outside the box lyrically,” Morris said. “He’s orbiting somewhere in outer space on a wavelength I really want to get on. It’s a lot of unconventional rhyme schemes that somehow fit a flow seamlessly. It’s taking this blank canvas and really turning it into a surrealist painting. It’s paying tribute to his Nigerian heritage, and it’s banger after banger.”

Morris also noted that Onwuka is eager to support his fellow musical artists in Cheyenne. The rapper attended nearly every single Fridays in the Asher show (pre-pandemic, when it was able to be held), and always gave equal attention to every performer from every genre.

Onwuka misses playing live in Cheyenne, though he recently returned to the stage for the first time since the pandemic began at Dillinger’s new weekly open mic every Thursday night. He’s looking forward to 2021, when he plans to drop a second EP and play live as much as he can.

“What I miss most is the mixed rush of nervousness/excitement at the same time,” he said of live shows. “The feeling of practicing in an obsessive fashion to make sure I have everything on point when I perform. That still exists with recording, yet the live atmosphere right as you start to rap, when the music drops and you see the crowd’s face, is pretty irreplaceable. I’m extremely excited for shows when that’s possible in the upcoming future. I want to show ‘The Grand Chieftain’ to multiple audiences to see their take on it and what songs are their favorites.”

He said he’s often surprised which songs people vibe with the most, but one he knows everyone will be able to relate to is “Dark Mage.” He started writing it as a song about darkness as a more abstract concept, but as the year unfolded, it became something much bigger.

“It’s about being in 2020, taking darkness or bad things that could happen to you – whether its in 2020 or any point of your life – and switching it to positivity. It’s the last song on the EP, and it’s the song that’s kind of the most relevant to 2020. I talk about Bobe passing, Chadwick Boseman passing, etc. I’m taking some pain and making something out of it. … trying to create something when everything feels like it’s all falling down around you.”

What: The debut EP of local rapper Mark Onwuka Jr., aka Onwuka, "The Grand Chieftain"

Where: Stream it on Spotify, Amazon Music, Bandcamp, Soundcloud and Apple Music