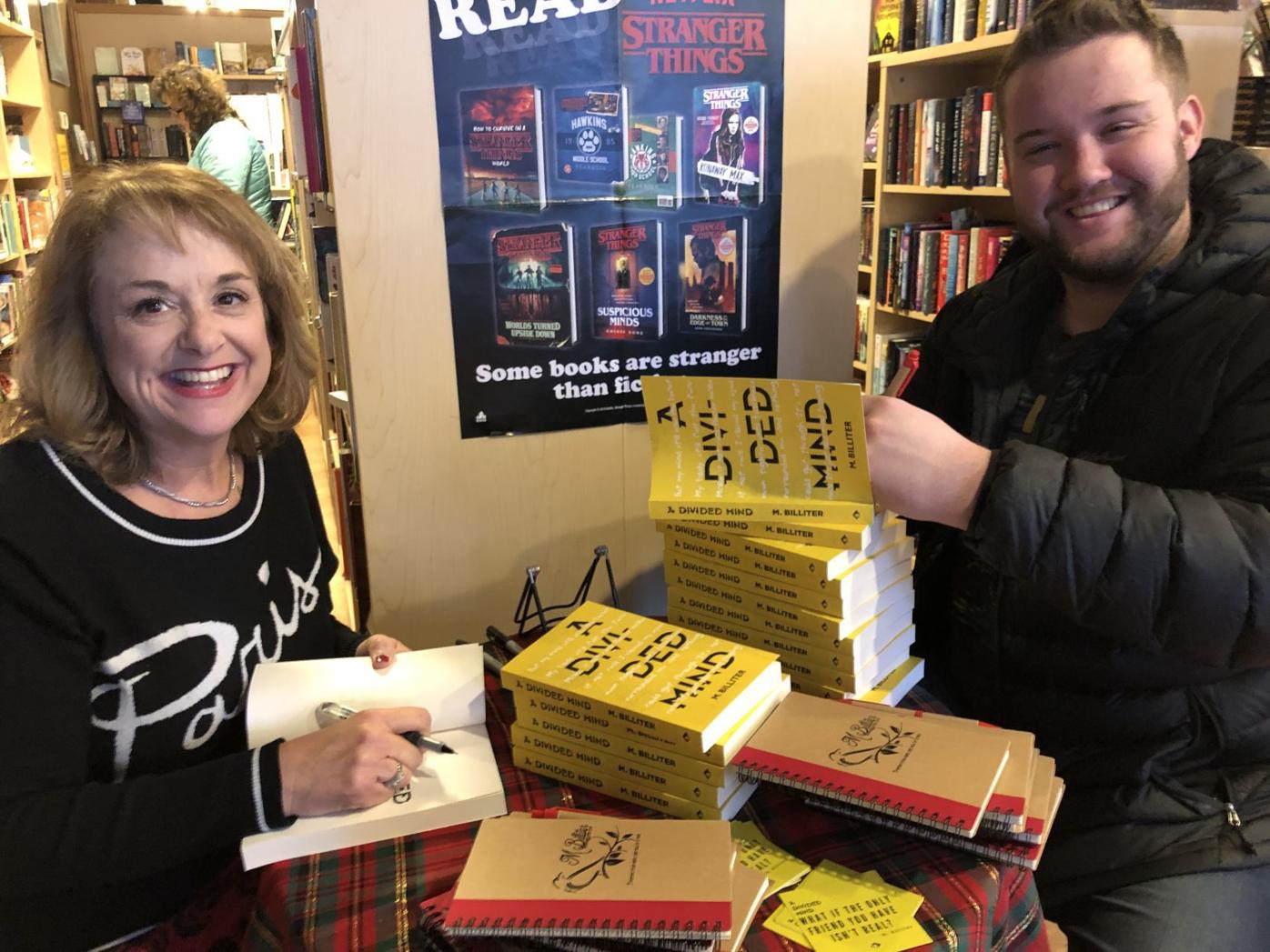 Mary and Kyle Billiter pose for a photo at a November 2019 book signing at Wind City Books in Casper for Mary’s first book in the series, “A Divided Mind.” Courtesy 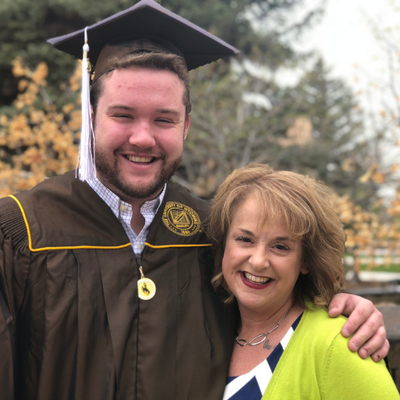 Kyle and Mary Billiter pose for a photo at Kyle’s graduation from University of Wyoming in May 2019. Courtesy 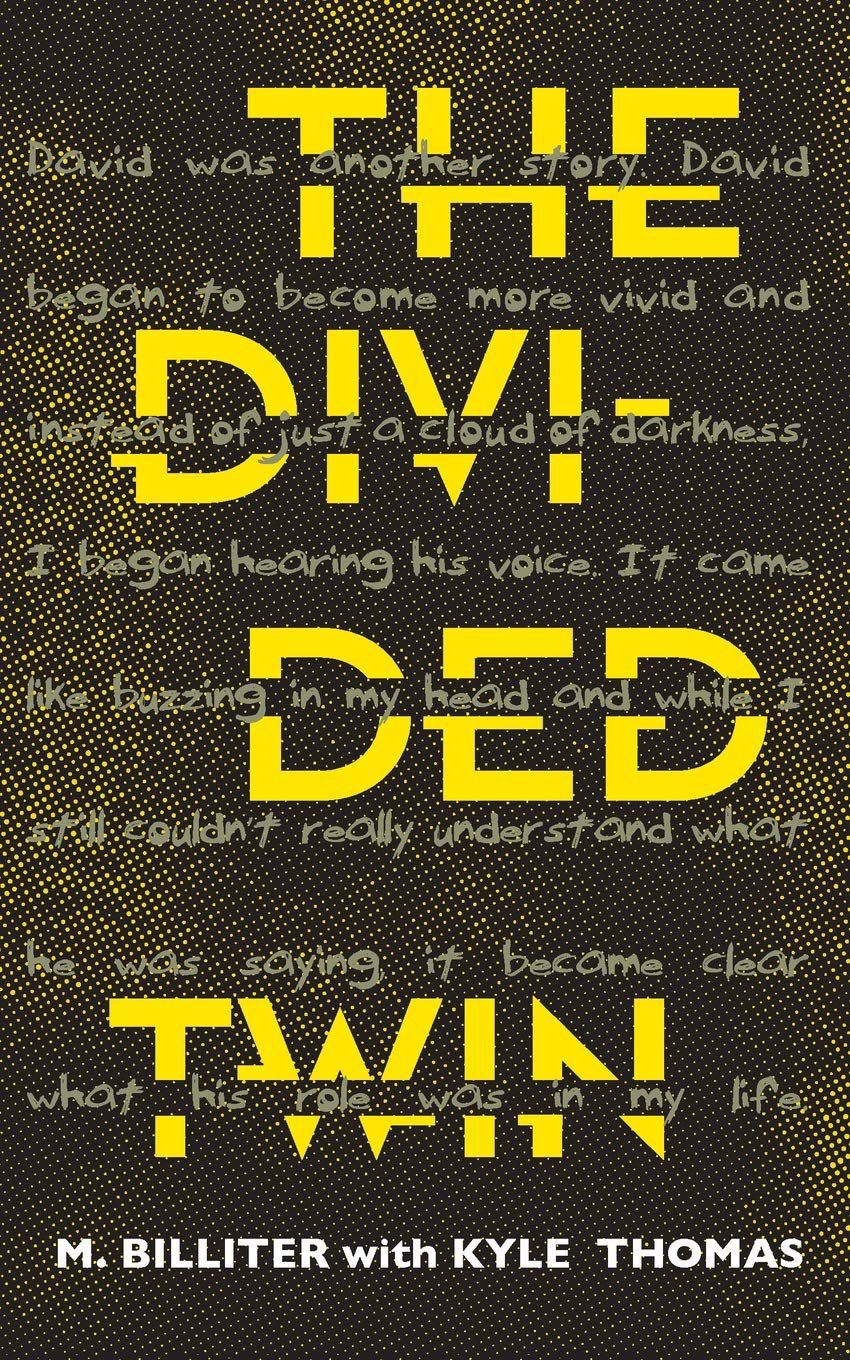 “The Divided Twin” is actually the second book in Mary Billiter’s The Divided series, but the first she’s ever coauthored with anyone, let alone her son. Courtesy

Mary and Kyle Billiter pose for a photo at a November 2019 book signing at Wind City Books in Casper for Mary’s first book in the series, “A Divided Mind.” Courtesy

Kyle and Mary Billiter pose for a photo at Kyle’s graduation from University of Wyoming in May 2019. Courtesy

“The Divided Twin” is actually the second book in Mary Billiter’s The Divided series, but the first she’s ever coauthored with anyone, let alone her son. Courtesy

Authors produce their best work when they write what they know. That’s why Mary and Kyle Billiter took a serious look at a family crisis before sitting down to write their debut co-authored novel.

The Cheyenne mother-son duo’s psychological thriller, “The Divided Twin,” tells the story of twin brothers entering adulthood just as a third twin, David – trapped in the mind of one of them – threatens the very foundation of the brothers’ relationship.

“Basically (the book is about) the bonds between identical twins, and Kyle is an identical twin,” Mary said. “It’s so tight, so then when there’s a third entity, a third personality, if you will … David is so threatened by their bond and then tries to break them up.”

The pair started writing the young adult novel in the fall of 2018 when both of Mary’s twins were starting their senior year of college – perfect timing to write a book about young men of the same age.

Mary is largely known as a romance writer who draws inspiration from the trials and tribulations of her own previous romantic endeavors, so writing from the perspective of a young man in his early 20s was uncharted territory. Speaking to her boys and incorporating Kyle’s writing helped her get into the brain of a 20-something young man.

“What does a 22-year-old college senior sound like?” she said of the initial question. “It was also super important for me not just to ask but to write it exactly like he said it. Sometimes it was more slang, it was a 20-something talking, so that was really, really great to integrate his voice literally into my work. … He was so into it, and he would be like ‘I’m studying for finals, but yeah, we’ve got a deadline.’”

Sometimes all it took was a phone conversation with her other twin, Austin, when she’d catch something he said to his girlfriend, and Mary would feel more confident in her ability to write authentic young adult dialogue.

Because Kyle was studying in Laramie and Mary was working at home in Cheyenne, much of the book was produced via long mother-son email chains, through which they also got advice from Austin, who was studying in Ohio at the time.

The characters’ experiences are loosely based on Kyle and Austin’s own turbulent childhood and having to cope with Mary’s experience with breast cancer, so she knew the book needed a personal format. That’s why, as soon as they had discussed the idea and Kyle sent her a journal entry he’d written, she knew telling part of the story through one of the characters’ journaling would be a critical character development tool.

Kyle did the heavy lifting and wrote all the journal entries, Mary said, which are some of the most troubling chapters of the book because they’re so raw. They weren’t easy for her to read as a mother, but they were critical and even healing at times.

“You want to think that with all of the counseling in the world that everything is OK and they’re 22, but there was some remorse there that they had to go through a turbulent childhood,” she said of reading the entries. “When the mom is in a scene, even though it’s told through one of the twins, I was able to give her a voice that I wish I had had when I was going through breast cancer. And I realized from reading those entries that what they needed at that time was to show them that I was OK. It was like a living amends; I was able to say, ‘I’m sorry.’ That two-year battle, I was so focused on what was going on with me, and they were in college; they needed to know if I was going to be OK.”

Although Austin isn’t listed as a co-author, Mary said he was a crucial part of the process because the book includes an entire letter he wrote her when she was going through breast cancer. It had been a year and a half since Mary’s last treatment when she sat down with the letter again, but taking the time to read it again, despite how hard it was, reminded her what a gift the letter was.

“At the time, it had an impact, but … you don’t usually get that, your child basically asking you to fight when he feels like you’ve given up,” Mary said, which is one reason she decided to dedicate the novel to Austin.

Both Kyle and Mary said their writing process was rooted in their differing strengths, which they agree helped them work together in a ying-yang-type partnership.

“I’m a total seat of the pants-er, and he’s an outline-er,” Mary said with a laugh. “He does characters really well. He’ll stick to an outline but for me, once an outline is written, I lose interest in it.”

“I would do the journal entries and just do a lot of self writing, I really had to, in regards to how dark the texture is,” Kyle said. “If I have a bad day, I write about it, and I would have to bring myself to that level. The journal entries have to be dark, so for that process, I have to find a bad day, and it’s just kind of spontaneous.”

Other than a May deadline that was eventually pushed to June, the duo didn’t have a set schedule they needed to follow. They knew when the piece needed to get done, but because Kyle was a full-time student throughout the nearly year-long process, he simply wrote whenever he felt like it or whenever he had the time. Whenever he finished an entry, he emailed it to Mary to give it a read.

Mary would then consider the parallels between the characters’ experiences and their own family’s story and use the journal entries to further the plot. Knowing the trauma of her son’s past, she drew upon painful memories to help inject a sense of genuine emotion into every paragraph.

As a seasoned writer with 32 years of experience as a journalist prior to authoring books, writing “The Divided Twin” with someone else wasn’t easy for Mary. Just like her years of competitive swimming growing up, many of her passions have been completely (or at least somewhat) solitary activities. But bringing Kyle onboard as a coauthor was a healthy writing challenge.

“My dad was a Pulitzer Prize-winning journalist, so I grew up with storytelling around the kitchen table,” she said. “Bringing in another writer totally changed the way I looked at story and development. He was giving me these pieces of gold … and I just wanted to bring my absolute best because it’s something I never got to do with my dad.”

Mary got choked up on the other end of the webcam describing the moment she first saw her name next to her son’s on the book cover. It was particularly meaningful sharing a byline because her father died when her twins were just six weeks old, so in some way, this feels like a means for his writing legacy to continue on to the generation he never got to know.

In addition to the joy of collaborating with a loved one, both Kyle and Mary agreed that the process of writing the book taught them more than they expected.

“When it comes to writing, Mom and I – we are completely different writers, so I learned a lot about how to create a story,” Kyle said. “Most of my writing is creating a plot, but not building a whole story from that plot, so it’s a lot of dead-end writing. I wouldn’t know how to continue this (project without her). Working with my mom … a published author such as her, increased my writing capabilities.”

“On my end, it was learning to listen and to get out of the mindset of ‘I think I know where this is going to go’ and letting it go where it was organically going to go,” Mary added. “I come from such a heavy romance background – lots of fun moments, and here I was really listening and just pausing to listen, not just to journal entries, but how he spoke.”

The process was cathartic because she got to tap into many old feelings and give birth to some new ones, Mary said. But it was also mentally and emotionally exhausting.

“It was healing to go back and have that perspective of I’m alive, I’m cancer-free,” Mary said. “But it’s living in that moment and realizing I have these amazing twins who have been through hell in their childhood who want to be part of this writing journey with me and what a gift that is. Their sophomore year in college, we didn’t know if I’d be around junior year. … It (writing this) was healing and therapeutic and challenging and fun, and turned me inside out, but in a good way.”

“Yeah,” Kyle chimed in with a smile. “I was ready to be finished with it!”

When: Available for pre-purchase now, but comes out June 27.

Where: Amazon and Barnes and Noble