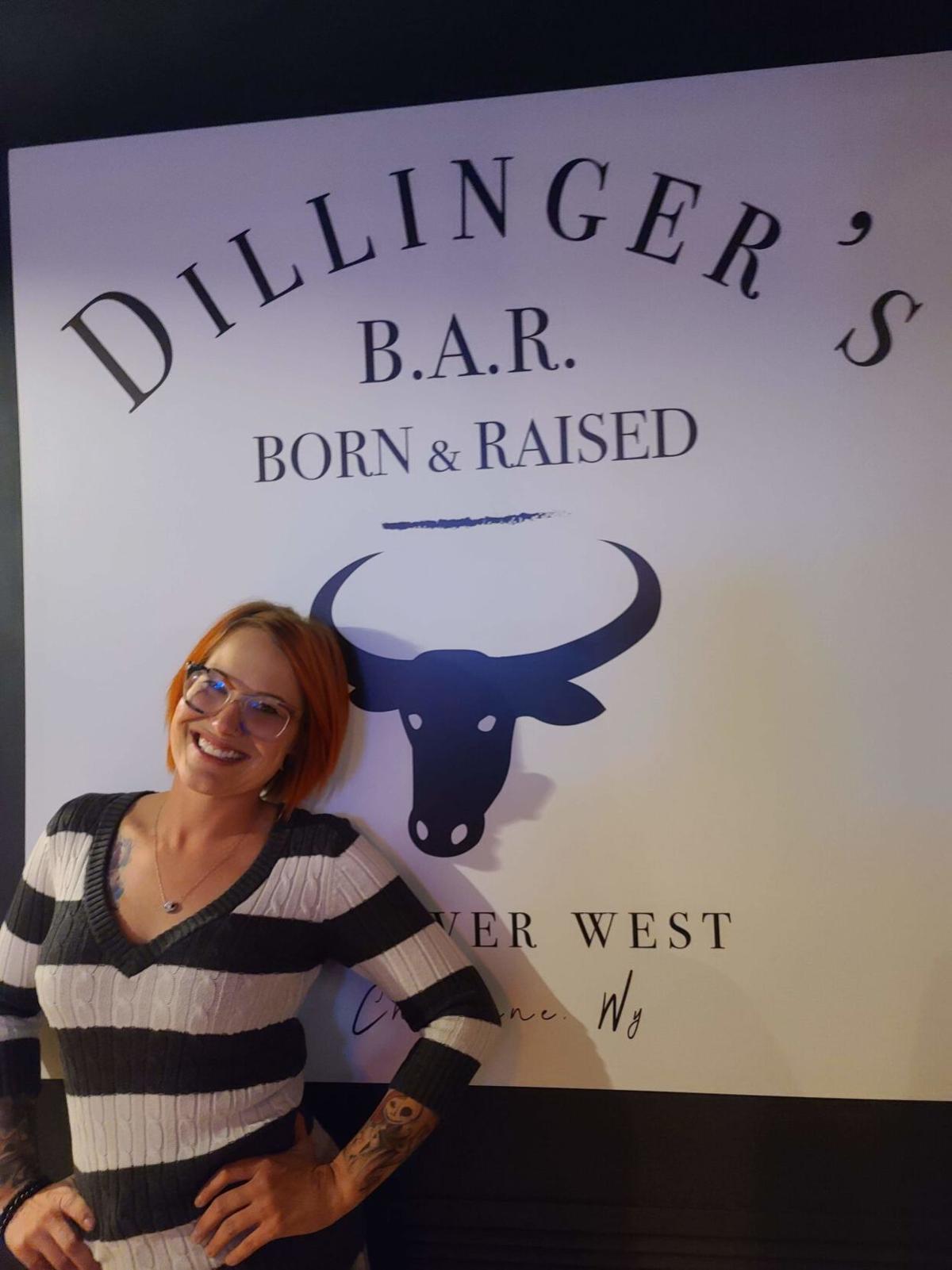 Michelle Gibbs always wanted to try stand-up comedy, but as a single mom of two she could never find the time to drive to Colorado for a night. Now, she can perform right in her hometown. Courtesy

Michelle Gibbs always wanted to try stand-up comedy, but as a single mom of two she could never find the time to drive to Colorado for a night. Now, she can perform right in her hometown. Courtesy

The best jokes are concocted in an atypical laboratory: open mic nights.

“It’s supposed to be just a place where comedians come to play,” said Cheyenne-born comedian Dominic Syracuse. “It’s more like a laboratory to test the jokes out.”

When Syracuse performed at his first open mic night in Los Angeles in 2015, he killed it. But the next several didn’t go so well – to put it bluntly, he bombed. Hard. He was ready to quit comedy right after starting, but then he heard Eddie Murphy recall in an interview that it takes a year to get an hour’s worth of material, and that open mic nights are for trying 10 jokes and finding which two work.

That inspired Syracuse to get back out there and start filming his open mic sets. Like a football player reviewing game footage, he took note of which jokes got a laugh and which fell flat, and he improved bit by bit until he had a solid tape to bring to bookers. That tape started earning him small gigs here and there until the fall of 2019, when he headlined for the first time.

Fast forward to spring 2020, and Syracuse decided to leave LA and quarantine in Cheyenne so he and his son could be in an area with fewer virus cases. When he got into the capital city, his phone started buzzing with requests to perform at comedy shows, but he’d just performed his hour-long special at the Historic Atlas Theatre in early March. He worried everyone in town had already heard his jokes, but he realized if he started an open mic series, he could workshop new material.

That’s when Syracuse contacted Dillinger’s, Cheyenne’s newest cocktail bar, to see if they’d be interested in hosting such an event.

“I need a place to practice, so I want to start this open mic night, and I’ll see if there is a community of comedians in Cheyenne who want to get together and just rehearse,” he said, recalling his pitch to Dillinger’s. “I figure it’s going to be mutually beneficial because it will be a cool, creative way to market your new place.”

“It went bananas,” Syracuse said. “It was more successful than anyone imagined. It’s Cheyenne, so I didn’t know how many people would respond. I just made a small flier, and within 24 hours, I had 16 people sign up.”

One of the people who first expressed interest was Michelle Gibbs, who’s known Syracuse since junior high. She’d dreamed of doing stand-up comedy for the last five years or so, but as a single mom of two, it was hard to find time to drive down to Fort Collins, Colorado, for an open mic night.

This series at Dillinger’s was the perfect opportunity to give it a shot, but she chickened out the first couple weeks. Last week, Syracuse said he wasn’t going to wait any longer.

“He’s been harassing me to get my butt up there and do it,” Gibbs said with a laugh. “I’m like ‘No, I don’t have material, yadda yadda,’ but you find you have more material than you think when you have children!”

Her first turn at the mic was worth the wait. Syracuse enticed Gibbs by saying it would only be three minutes, but she went on for 10. She also got such a great response from the audience, it earned her runner-up in the event’s set of the night contest.

Gibbs said it was intimidating not knowing how people would respond to her jokes, particularly because she doesn’t write anything down, she just records occasional conversations with friends as inspiration for stories to tell on stage. But the rush of excitement she got from standing up there overpowered any nerves. Turns out all the preparation she needed was telling jokes behind the bar at Francis E. Self American Legion Post 6.

This is the reaction Syracuse hopes to get from all participants. He realizes they don’t all want to pursue a comedy career like he has, but standing in front of an audience and sharing an experience that other people can likely relate to is healing.

Throughout his research for this endeavor, he learned about the connection between sharing your story and improving your mental health.

“We’re in a really interesting time right now because we’re experiencing a traumatic event at the same time,” Syracuse said of the pandemic. “But what (studies are) showing is laughter can be medicinal. … In comedy, the first rule is talk about what you know. What they’re doing is they’re just getting it out, saying, ‘This is what I’m dealing with,’ or ‘This is what I’m experiencing.’ So for people to just talk about it is therapeutic. … For people to talk to each other is extremely medicinal, and then you add laughter onto that, and it becomes a cocktail to get over stress.”

Gibbs couldn’t agree more, adding that this was the perfect year for her to express herself through her comedy and offer others a distraction from the issues we’re facing as a society.

“It’s definitely a release, and I think that people need more laughter in their life,” she said. “The future is uncertain. All we have is right now, so if you’re not making people laugh, is it really worth it? I try to find comedy in everything. … There is so much negativity, so it’s nice to have something in Cheyenne where people can go and forget about it and be in the company of others all masked up. I think that’s exactly what Cheyenne needs right now.”

And that’s what Cheyenne will continue to get every Tuesday at 7 p.m. On top of the weekly open mics, Syracuse and the Dillinger’s team has also started a monthly Comedy Campout showcase that will feature regional and the occasional national headliner. The event is campout themed because Dillinger’s and the accompanying Array building space doesn’t have much furniture, so magician Daniel Jaspersen gave Syracuse the idea to encourage people to bring camping chairs and tents to sit in and social distance.

Dillinger’s has taken the theme one step further by decorating the space accordingly and concocting a s’more shot that will only be sold at Comedy Campout. Los Conejos food truck will also be parked outside on Central Avenue to sell other sweet dessert treats.

This weekend, comedy fans can enjoy a showcase featuring several Greeley comics who drove up for the last open mic, in addition to a set by Syracuse himself and fellow LA-based comedian Reem Edan, who’s been waiting out the pandemic in Denver (and ironically headlines the same LA club, The Federal, as Syracuse).

In the future, Syracuse said he’s going to film every open mic night participant’s set and put it up on the Dillinger’s Facebook page so people can vote on their favorite. The top two most-liked comedians will get to perform at the next Comedy Campout as an opener for the professional headliner.

So far, the events have been a success – Syracuse said with a laugh that he knows he’s building a legitimate comedy club because they’ve already experienced drunk hecklers – but what matters most to him is providing a nonjudgmental place for people to share.

“It’s become something of its own,” he said. “Most open mics are places for comedians to come and try stuff out. What this is .. it’s become a place for anybody who appreciates comedy to come check it out and give it a try, if they’re bold enough.”

Where: Dillinger's, 1601 Central Ave. (and the accompanying Array building)

*For more information or to let organizer Dominic Syracuse know you're interested in getting on the lineup, message him on Facebook at www.facebook.com/dominic.syracuse (space is limited due to social distancing protocols, so let him know as early as possible, and if you're just coming to watch, also get there as early as possible)

Where: Dillinger's, 1601 Central Ave. (and the accompanying Array building)

Note: Due to popular demand, Dillinger's has also started an open mic night at 7 p.m. every Thursday for musicians and other performing artists of the non-comedic variety.