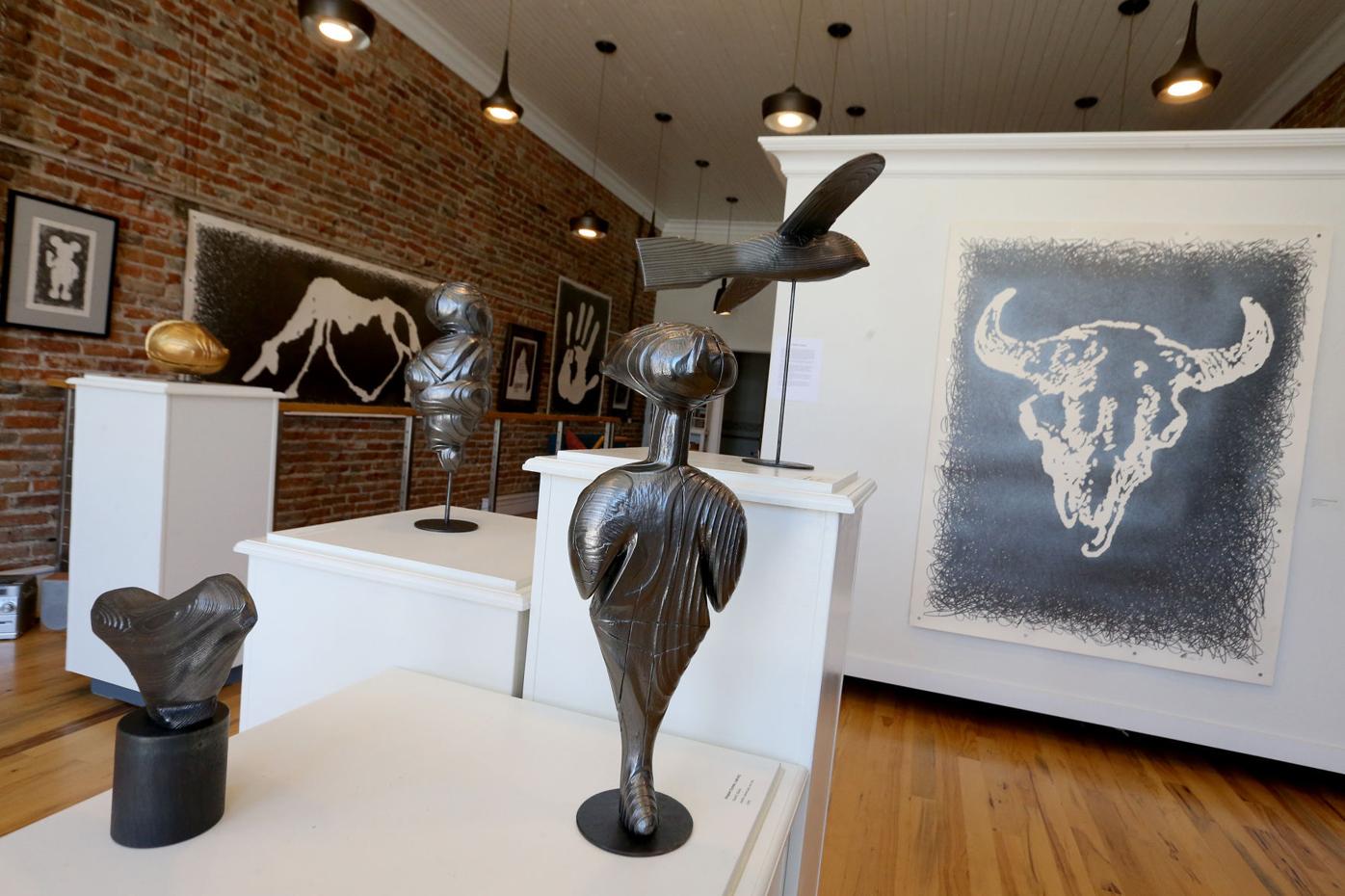 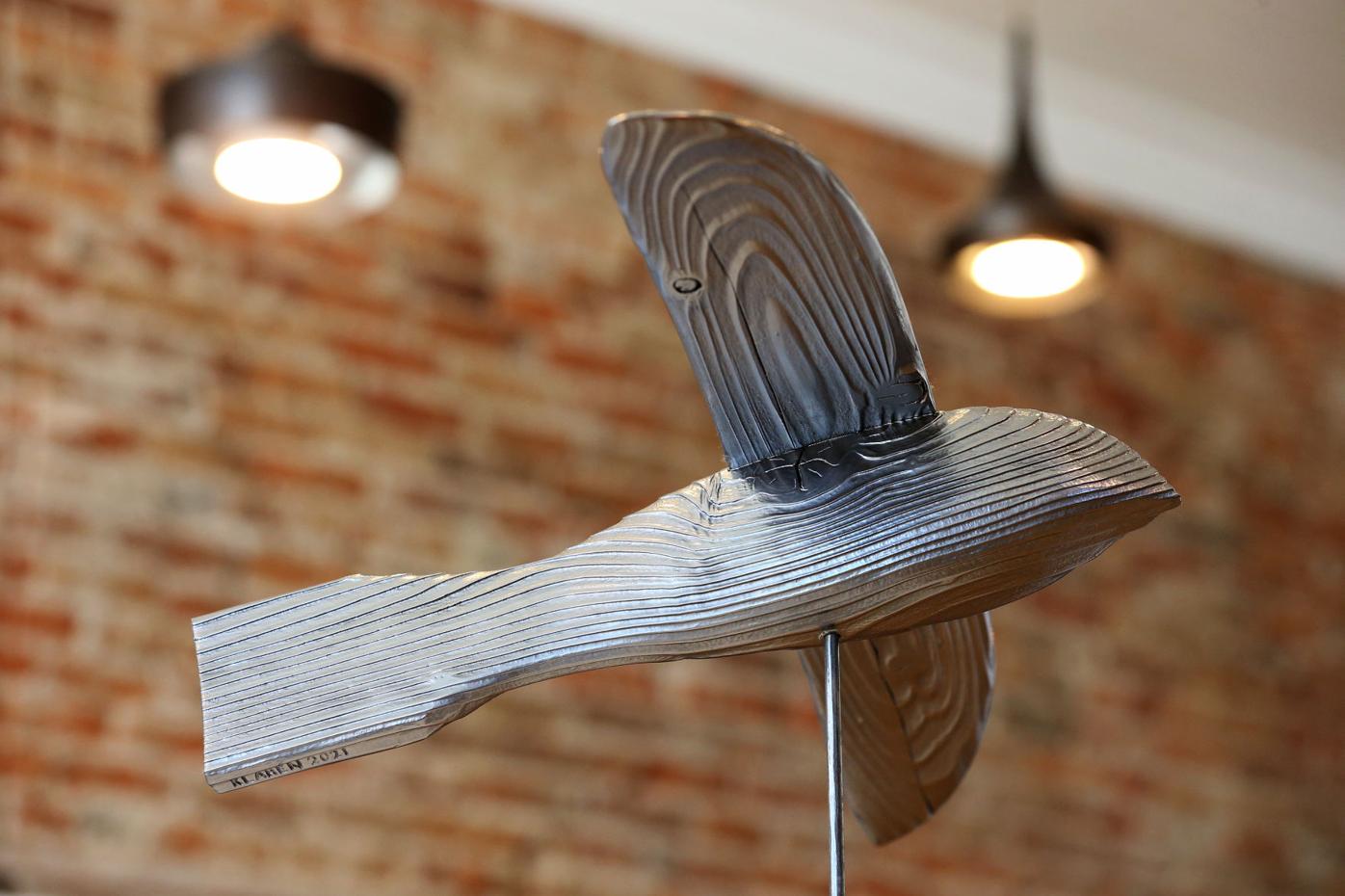 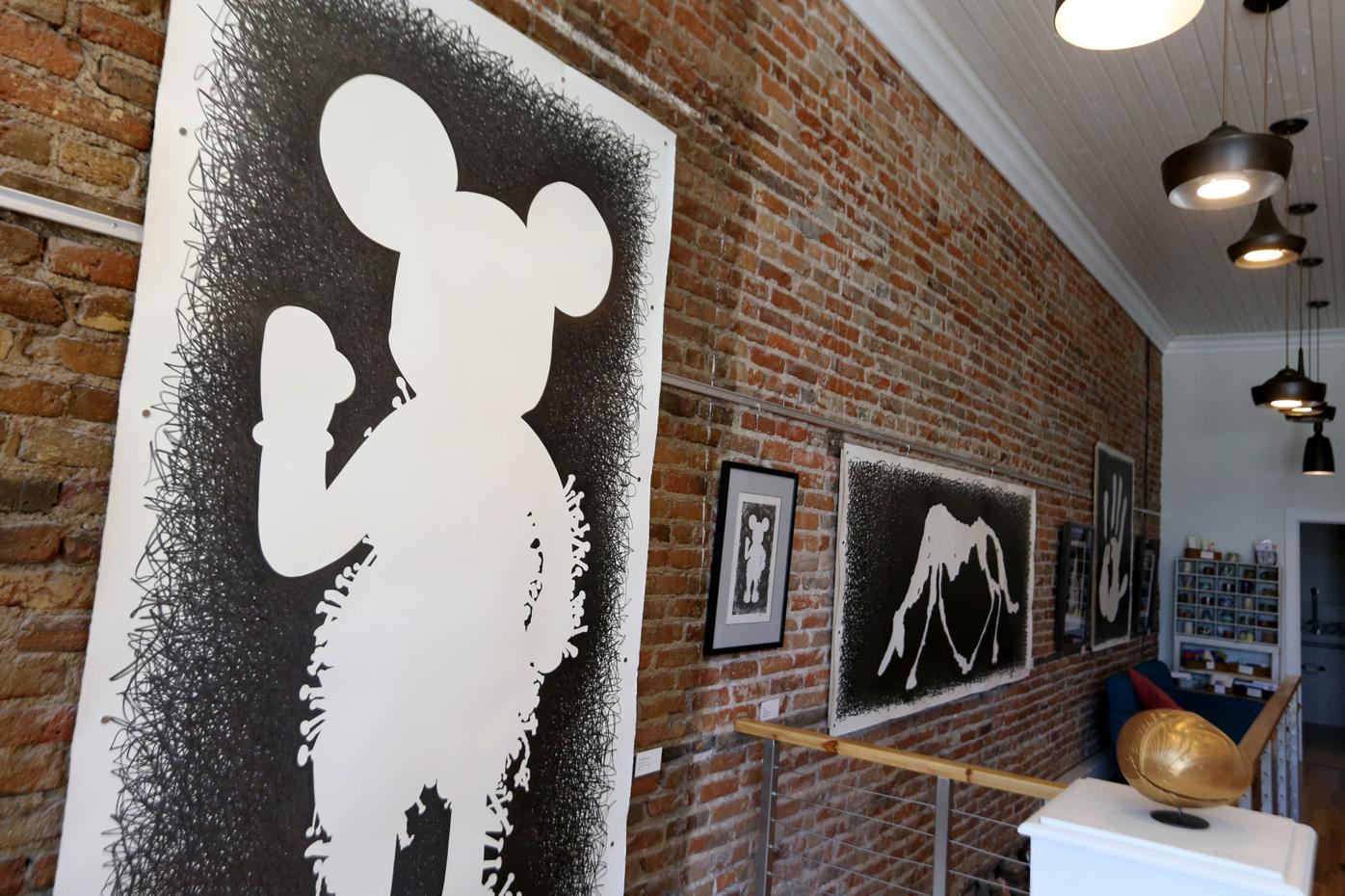 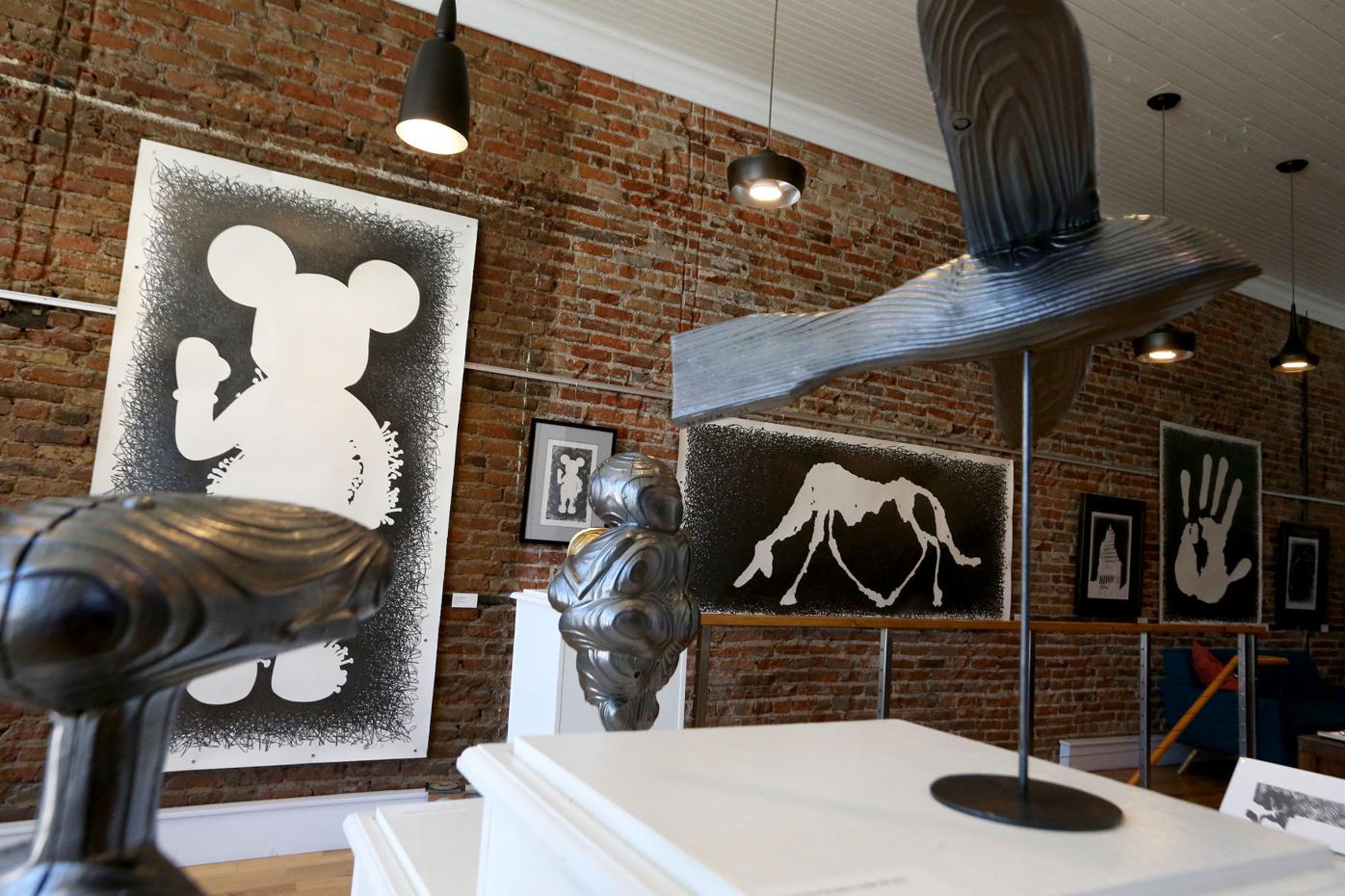 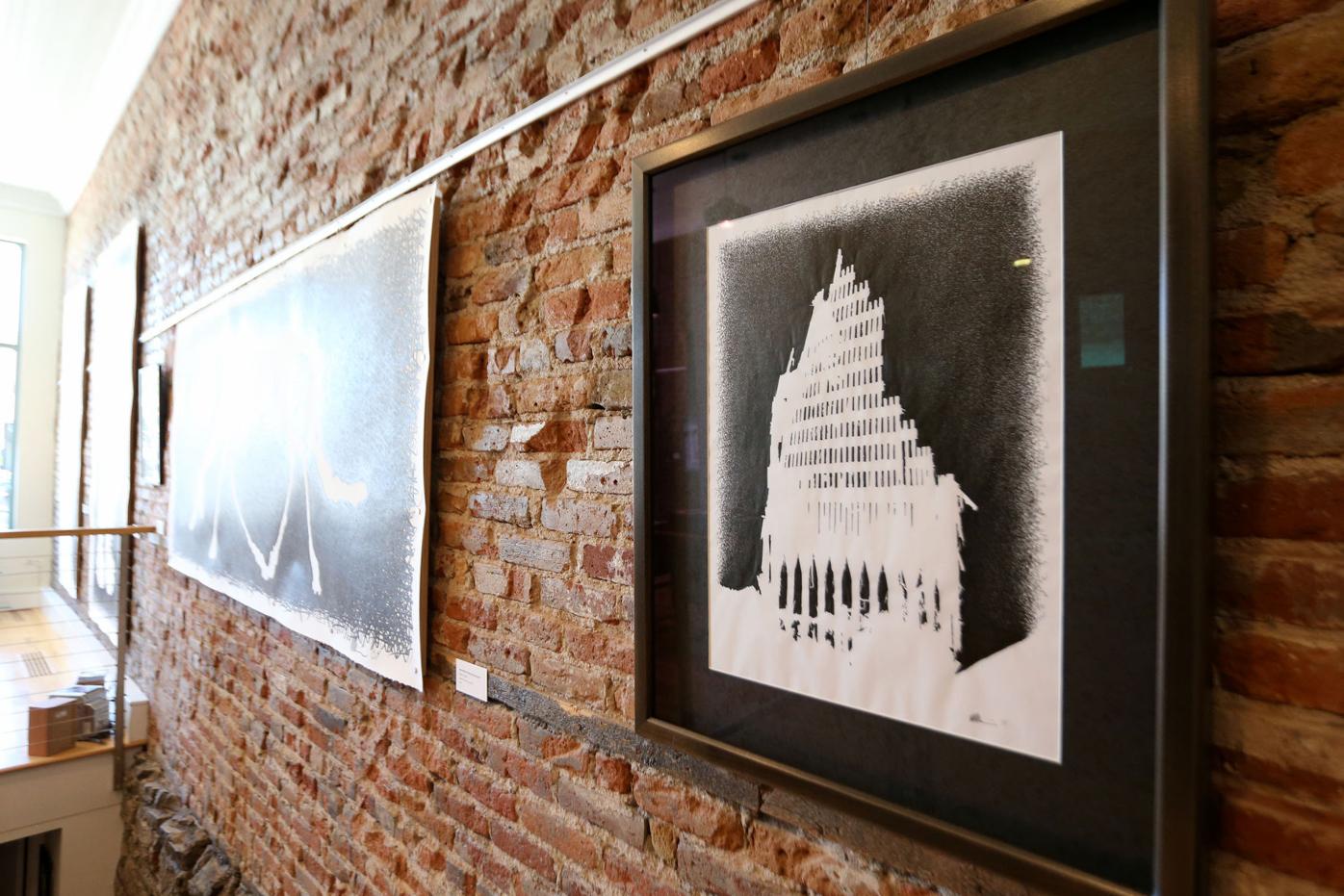 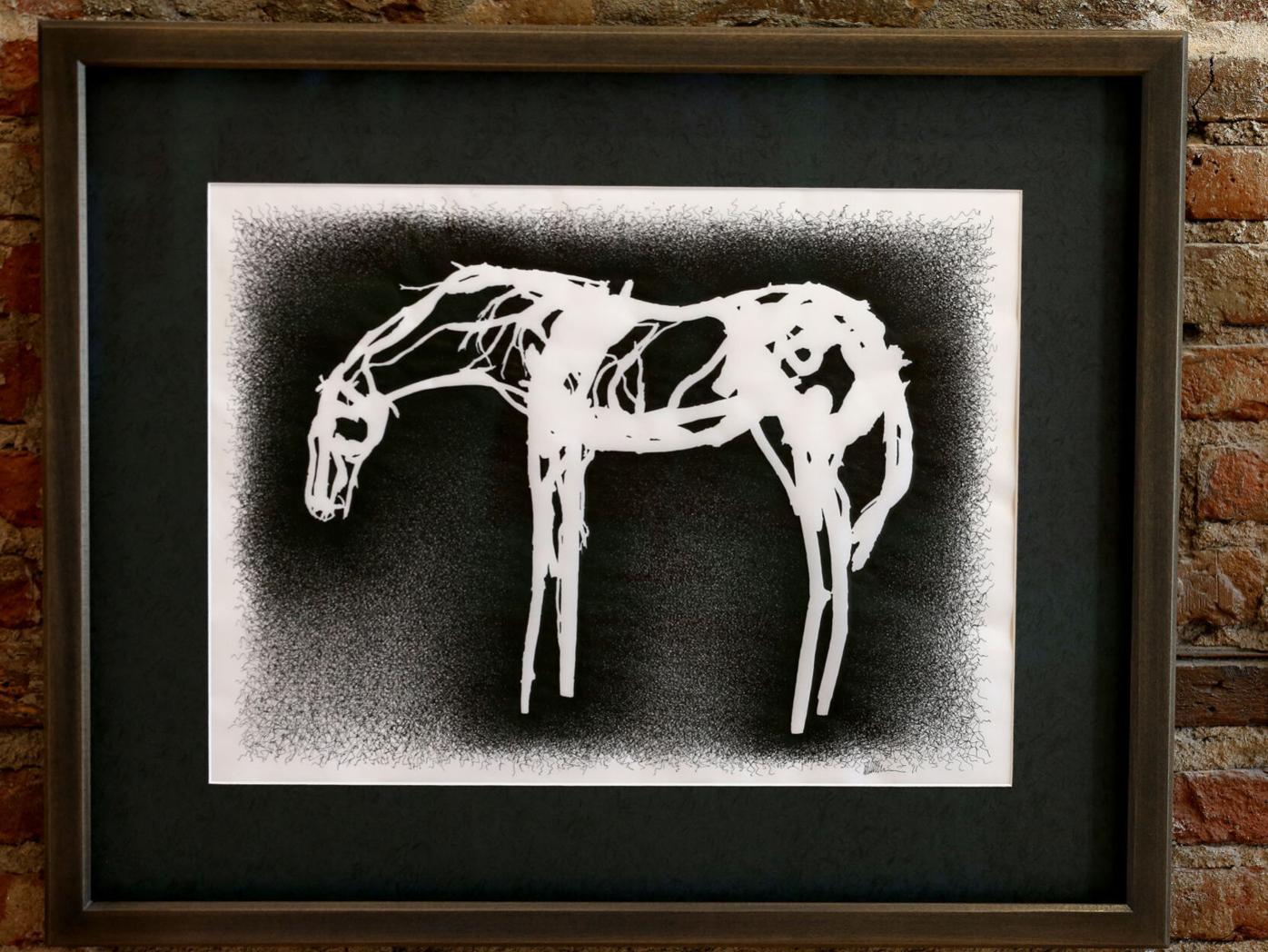 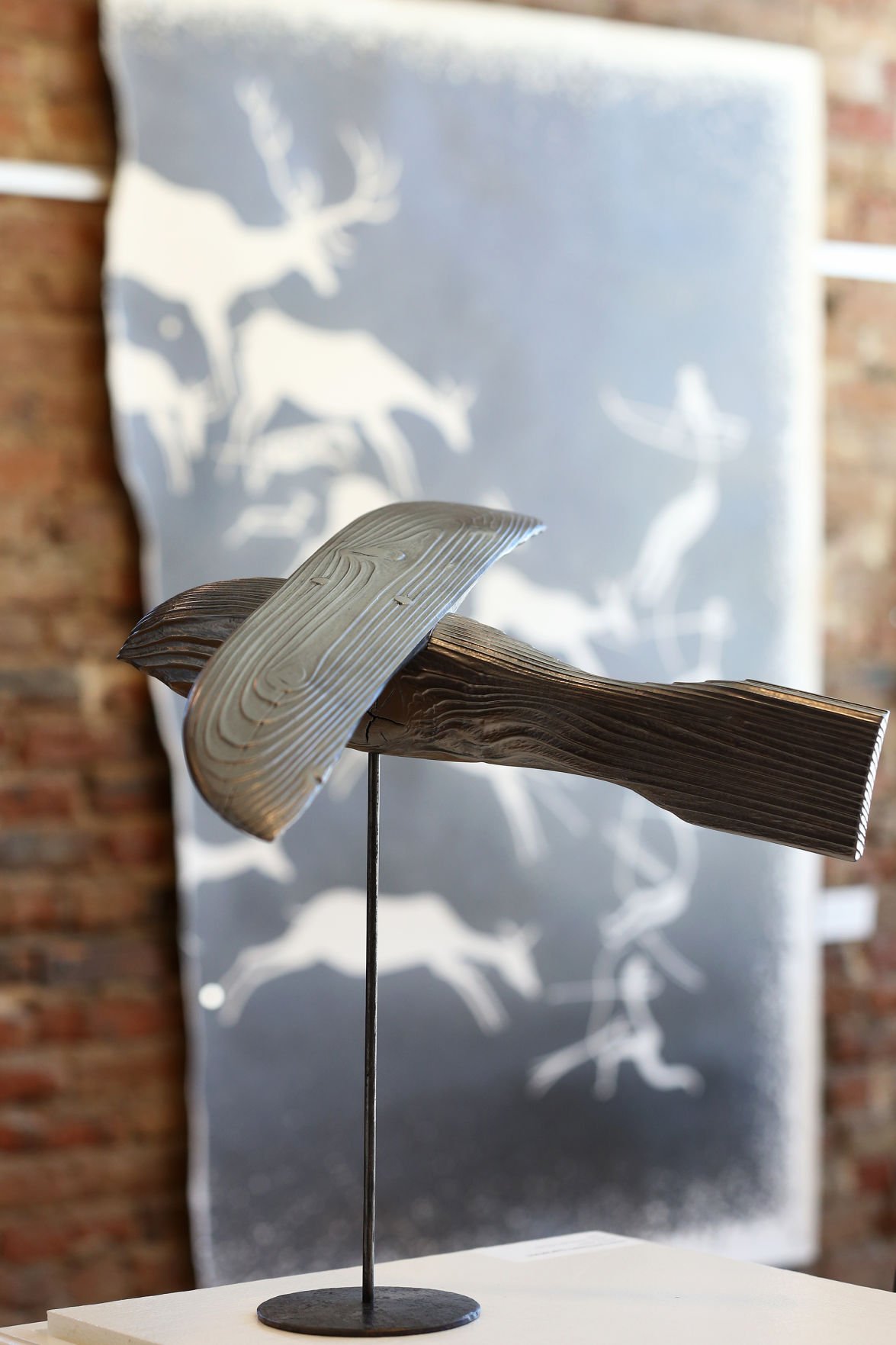 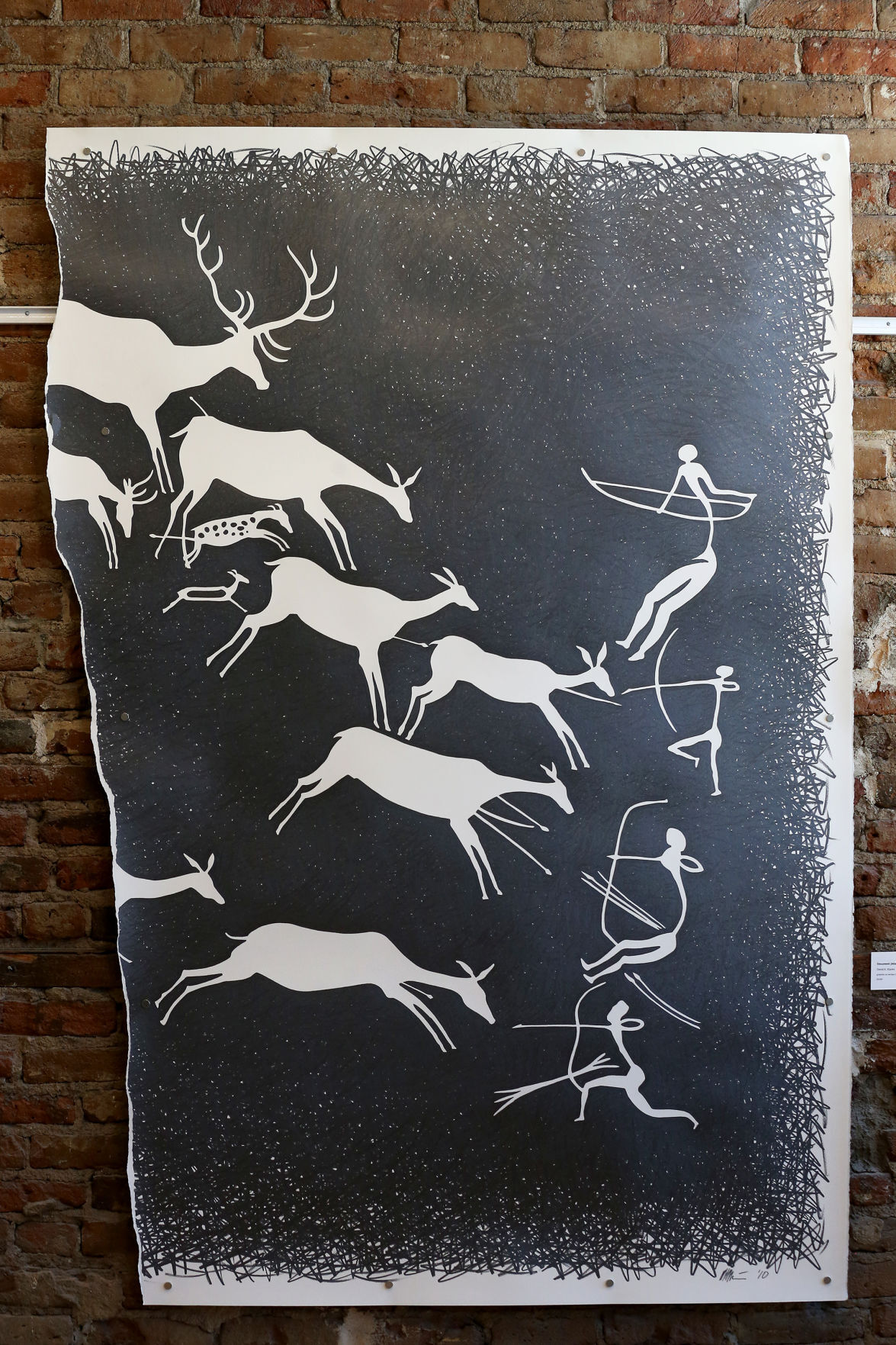 David K. Klarén doesn’t view scribbles as something you use to cover up a mistake. Instead, he uses scribbles in his artwork purposefully, to draw attention to a subject matter.

“I usually start at the image edge and work out. And then I lay that down nice and tight, and then start filling in the background with crosshatching – lots and lots of scribbles,” he said of his process for creating the pieces in “Shoulders of Giants,” his current solo show at Clay Paper Scissors Gallery & Studio.

Born in New Bedford, Massachusetts, and raised in Pinedale, Klarén grew up in a family that loved creating. His mother made everyone’s clothes, and she often spent her free time doing needlepoint. Klarén became familiar with needlework himself, and that was one of the many forces gravitating him toward the art department in high school.

His art education didn’t end there. Klarén got his Bachelor of Art from Montana State University and his Master of Fine Arts from Virginia Commonwealth University, and worked on the East Coast for several years after graduate school.

But the West was calling him home, so he moved back to Pinedale to create his own studio.

I saw these graphic pieces of David’s years ago when he started doing them online and was instantly fascinated by them. When we decided to show him, I knew right away I wanted them in the gallery. I was excited about showing such big pieces in the space. I love their size and the way they glow on the walls. – Camellia El-Antably, co-owner of Clay Paper Scissors Gallery & Studio

These days, Klarén splits his time between creative drawing and sculpture and commissioned work in fine woodworking and carpentry.

Everything in his current Cheyenne show is either a drawing or sculpture inspired by famous works of art throughout art history, which is emblematic of Klarén’s broad interests.

“I love archaeology, geology and all of that kind of stuff,” he said. “So that creeps into my work, no matter what body of work I’m working on. And then also choosing pieces, maybe by specific artists that I think are really interesting, or artists that I really like, that’s kind of a place to start. But I found after starting especially these drawings, that not necessarily every piece that I think would be really cool, actually really translates very well.”

Google is Klarén’s best friend when it comes to starting a piece in this current series. Most are inspired by a specific image, so he needs a basic shape to work from. After he finds a usable image online, the second step is to place it in Photoshop and make adjustments to its contrast, scale and background (if it’s a really busy background, he just takes it out).

When looking at scale, it’s imperative that Klarén adjusts accordingly in Photoshop to whatever paper he’s using for the final product.

“I can get this paper in rolls, which allows me to go bigger,” he said. “I’m not opposed to small work, I’m not opposed to big work, but they have a lot more power in a larger scale. … these need to have some sort of a scale to them because the scribbles, the crosshatching, is a certain size. Those are fairly big loops, so to try to force that into something smaller, I think would lose that sense of energy.”

After he adjusts the image scale in Photoshop, it is printed out and goes on the drawing board as a projected image, aka a sort of advanced stencil, which Klarén draws over using a soft graphite pencil. He fills in the background of the image – which, in this show, is everything from a Mickey Mouse silhouette to the outline of a Roman column – with large scribbles, and, voila, he has a finished piece.

Some people might question why Klarén wanted to center an entire show around images originally created by famous artists rather than himself, but the artist sees his pieces as honoring creators whose shoulders today’s artists now stand on.

Distinguished Old West artist C. M. Russell’s famous buffalo skull he put next to his signature was the perfect place to start.

Klarén wanted the whole show to show the flaw in the common conception among artists that the better you can convey an image or a scene or a feeling, the better artist you are. He doesn’t believe that artists whose work is more realistic is ultimately better, especially because he’s been able to draw fairly photo realistically since his teenage years, so he finds realism boring.

Instead, ever since college, when his eyes were opened to all types of art, the artist aims to create work that challenges people. He wants viewers to interpret everything themselves, and there are no wrong answers. His job is to create, Klarén said, but the viewer’s job is to decide what the creation evokes. Everyone brings different life experience to every piece, so who is he to say they’re wrong?

There are several broad themes Klarén worked within throughout this series, but more broadly he’s playing with the concepts of an object versus its background.

When: Now on display and for sale (the gallery is currently open 11 a.m.-3 p.m. Fridays and Saturdays and will be open 5-8 p.m. Thursday, June 10, for Cheyenne Artwalk)