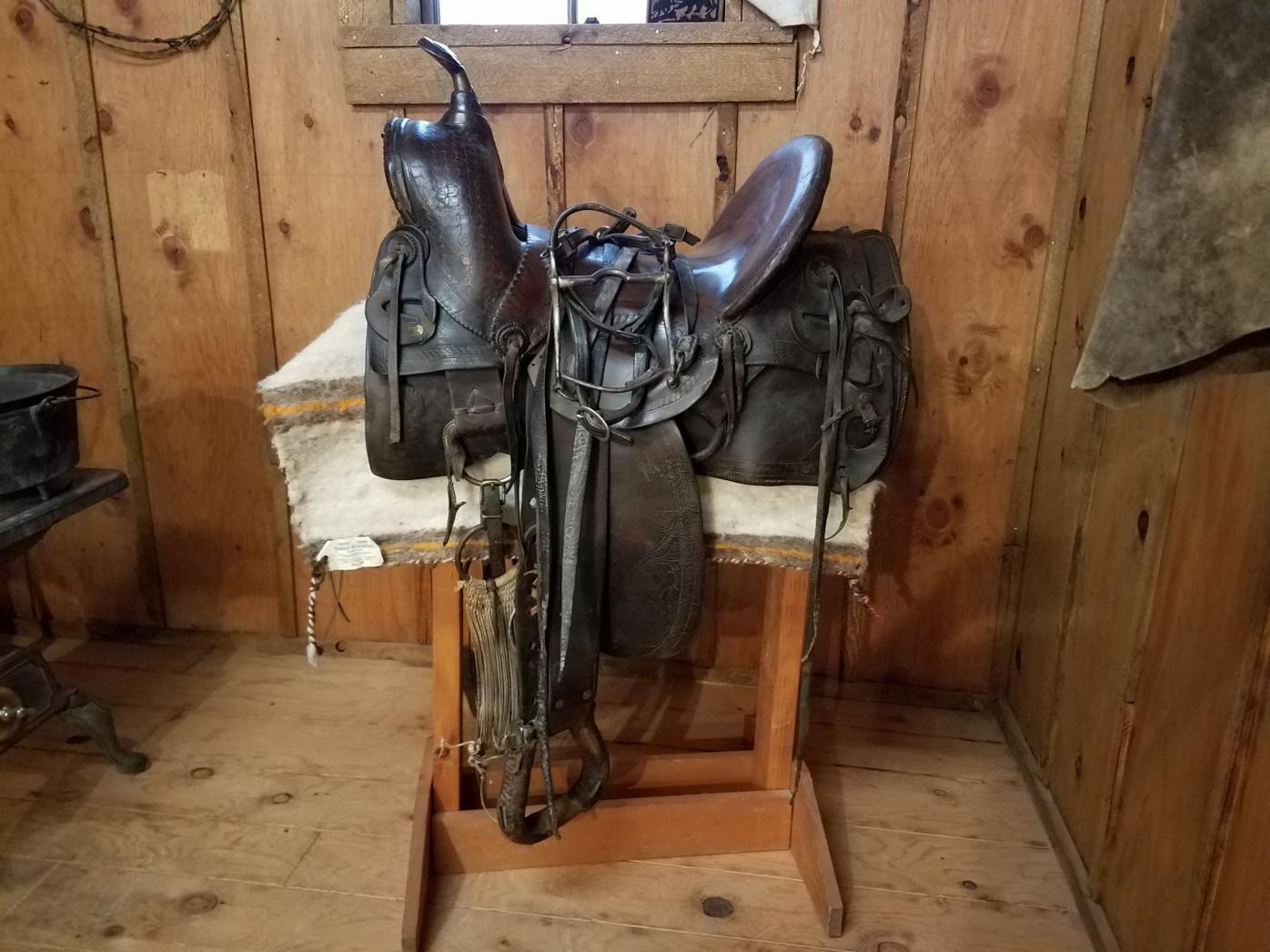 Thornton Biggs’ saddle, a gift of the Holly Hunt family. 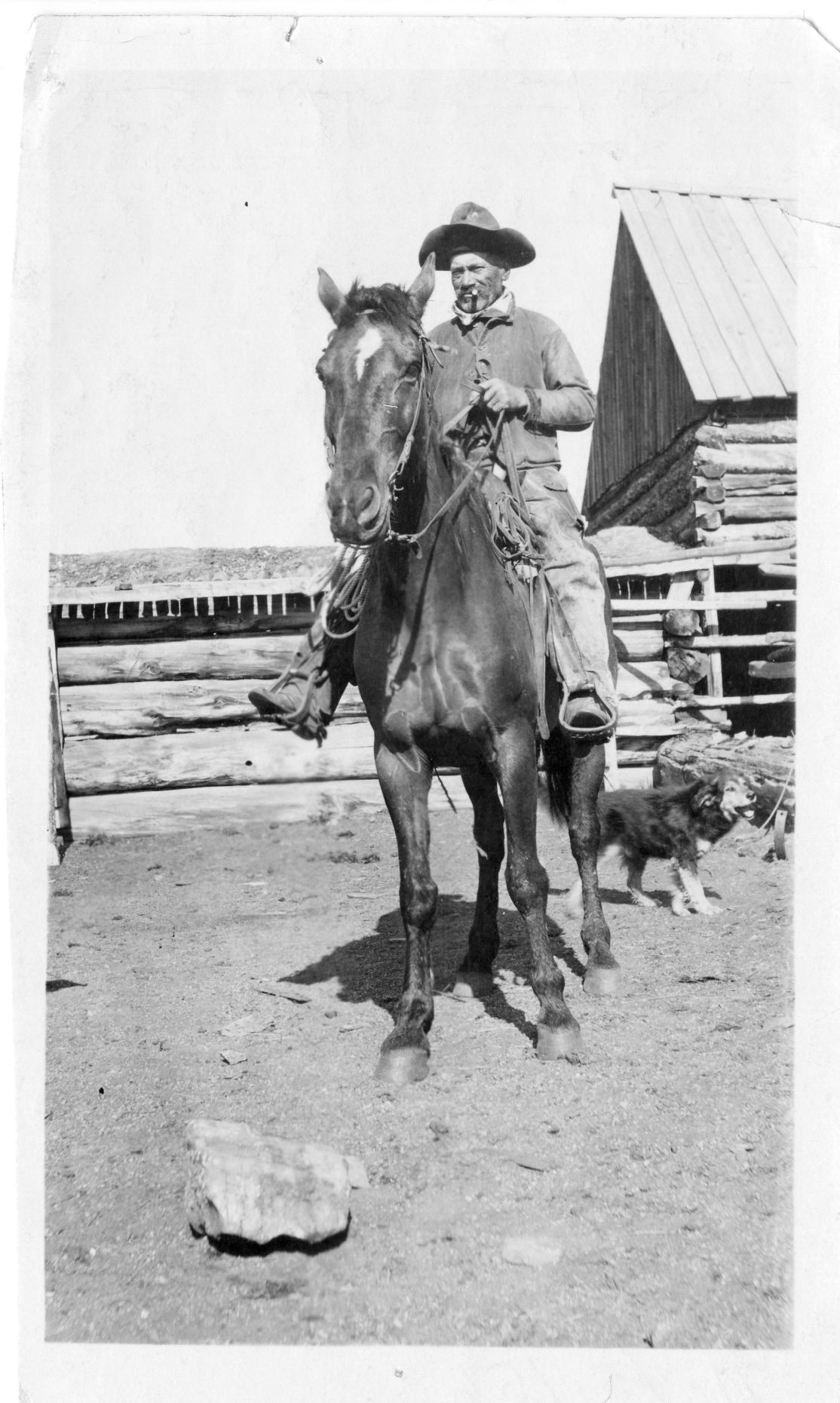 Thornton Biggs mounted in a corral on the Hunt ranch (Circa 1920). 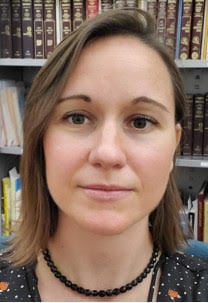 Thornton Biggs’ saddle, a gift of the Holly Hunt family.

Thornton Biggs mounted in a corral on the Hunt ranch (Circa 1920).

When Thornton Biggs (c. 1855-1941) was born he was a “possession” of his slave-holding owner in Maryland. His parents were slaves and it seemed likely this would be his future too, a long way from Wyoming.

The Civil War and victory for the Yankees changed that. Though he was too young to take part in the war, his prospects were varied. He came of age free, but with all the cultural biases against those born Black or “mulatto” as his race was described in the 1910 U.S. Census.

Biggs probably worked for a stable owner in the horse country of Cumberland, Md., after 1870. He married Molly Workman in nearby Greene County, Penn., in 1885 and listed his occupation then as “horse trainer” in Cumberland.

Marriage records on Ancestry.com show that he was 29 and she was 23 at the time they wed in 1885. They had two sons, Fred and Charles, born nine months apart, in 1884. Also, Molly had a daughter, Katherine, born in 1900. His marriage may have been intended only to give Molly and their sons his name. Only Fred outlived him (dying in Pennsylvania in 1960). His wife Molly died in 1903, when her youngest child was just three.

Biggs was not at home much, if at all, after his marriage. In the late 1880s he found work as a cook on a crew headed by Owen Hogue as they trailed cattle into Wyoming. A Laramie-based ranchman, Ora Haley, bought some of Hogue’s cattle, and Biggs came along as well, according to Albany County rancher Holly Hunt, who employed Biggs decades later.

Another account says he worked as a cook for a few years, then became a “rep” for rancher Charles Hutton, going to various roundups and claiming Hutton’s cattle that might have turned up. This account, in the 1955 book “Wyoming Pioneer Ranches” by Burns et al, also names several other ranches where he worked over the years. One was at Red Buttes, where Biggs had a chance to work with thoroughbreds once again. Dr. Whitehouse at the Oxford Horse Ranch was his employer then.

Biggs’ ability with horses made him a font of knowledge among western ranchmen. He often helped other ranchers who needed his talents. In 1897, the Laramie Republican notes that Biggs accompanied a carload of cattle to Cheyenne for Ora Haley. He stayed in Haley’s employ for about 20 years. After 1898 he bunked at Haley’s new Oasis Ranch, 15 miles north of Laramie.

The newspapers didn’t often make much of cowboys’ comings and goings, though society columns did list other travelers. Therefore, it is a mark of status and respect that the Boomerang noted on Oct. 23, 1899 that “Thornton Biggs of Oasis was in town yesterday.” Much later, the Republican had a short note that Biggs was attending the stock show in Denver.

In 1902, Thornton Biggs appeared in Cheyenne as a witness in the famous murder trial of Tom Horn. Otto Plaga had earlier testified he had seen Tom Horn the morning of the murder, 30 miles away from the scene. Biggs testified that he had known the cowboy, Plaga, for 15 years and his reputation was good, rebutting prosecution witnesses who had testified that Plaga was a notorious liar.

Newspapers reported that Biggs created quite a stir in the courtroom as he entered in “his chaps, spurs and other cowboy accoutrements,” according to the Cheyenne Leader. The Boomerang said: “Thornton Biggs, foreman for Ora Haley, entered the courtroom in full cowboy rig, creating some excitement by his appearance. He said his business was a cowpuncher.” Biggs’ testimony aided the defense case but didn’t prevail — Horn was found guilty and was hung in 1903 in Cheyenne.

Although that Boomerang report gave Thornton Biggs the status of foreman, as opposed to cowboy, it was not strictly accurate. There was a limit to what a Black man could aspire to then. It may be that Ora Haley simply had no foreman on the Oasis — with Thornton Biggs or “Thornt” as the cowmen called him, none was needed.

The Wyoming Tribune in Cheyenne reported on April 1, 1904 that a white divorced woman, Idessa Heidrich, claimed that Biggs was the father of her child born the previous year. “The man is trying to have the matter adjusted so as to avoid criminal prosecution,” said the short article. He must have been successful, as there is no further mention in the papers of this case.

There was a murder at Black madam Susie Parker’s brothel on Nov. 20, 1904; Biggs may have been the intended target. Instead, the gunman, an incensed bartender, shot a young man, Charles Bussard, who had been drinking with Biggs earlier in the evening.

There was a woman involved, the girlfriend of the bartender. The woman had claimed that one or both men had been “paying attention” to her — cause enough for death, the bartender may have presumed; he boldly went in search of a gun.

The bartender, August Johnson, located Bussard and Biggs at the brothel, there was a fight, a lamp got knocked over, setting fire to the furnishings. Biggs escaped while the unfortunate Bussard was shot and killed. In the preliminaries, the coroner’s jury found Johnson likely guilty, three shots were fired, two missed Biggs, but the third killed Bussard. The trial got underway in March 1905; the verdict was “not guilty.” Progress of the case was followed closely by newspapers in Cheyenne and Laramie.

“To say that the verdict was received with surprise, would be a mild statement, indignation appears to express better the feeling which was very generally expressed all over the city yesterday,” reported the Boomerang. The defendant was let go. Presumably he did not harass Biggs any further, and the woman at the center of the tragedy disappeared from Laramie.

Biggs adapted well to the west despite these bumps in the road. He had an “animal sense” as authors Phillip Durham and Everett Jones described it in their 1965 book “The Negro Cowboy.”

One story about Biggs is that around 1905 the state decreed that all cattle had to be dipped in oil to control mange. Biggs’ crew of cowboys drove Haley’s whole herd to a neighboring ranch to use their vat. But cows couldn’t find their calves afterward—the oil removed their scent. Biggs ordered a cowboy to get a certain calf and force a particular cow to bond with it even if they had to be tied together.

It did take a five-man crew about five days to do this, but his process worked, regardless of whether it was the right calf or not. Biggs became famous for dealing successfully with a problem that could have led to a lot of starving calves. Legend has it that he actually could match the right calf with its mother. This story is in the Burns’ book.

Biggs also had “people sense” too because he quickly figured out what talents ranching required. He trained “a whole generation of future range managers, wagon bosses, and all-around cowpunchers in the finer points of the range cattle business,” say Durham and Jones, whose book on Black cowboys highlights others as well as Biggs. They quote Biggs’ employer, Haley, as saying that Biggs was highly regarded by the other cowboys; he worked hard and shared his knowledge.

In 1910, the U.S. Census shows that Biggs was a hired hand for bachelor rancher “Dinnis” (Dennis) Fee on Mandel Lane, west of Laramie. It also records that he had a fourth grade education, could read and write, and that both his parents had been born in Virginia. He might have still been nominally employed by Ora Haley at the time.

Biggs won the “Old Man’s Race” at the County Fairgrounds as reported in the Boomerang, July 7, 1915. Other sources say that he competed often at amateur and professional horse races.

Ora Haley died in December of 1919, and though he had sold his ranch holdings several years earlier, Biggs may have stayed on for a while. In 1920, the Fee ranch, where he had worked 10 years earlier, was taken over by Holly Hunt. Biggs was in his 60s then and went to work for Hunt. It was the last of his ranch jobs. According to Hunt, he stayed as long as he was physically able. “He was an outstanding cowman as well as being very loyal and devoted to the Hunt family,” said Hunt.

The 1940 U.S. Census shows that Thornton Biggs lived the last of his days at the Colorado State Hospital in Pueblo, dying that year or in 1941. The census says he was 90 in 1940, but it is more likely that he was closer to 85. It is significant that he told the census taker that he was a widower, showing that he might have kept in touch with his family in Pennsylvania. He knew that his wife Molly had died over 35 years earlier.

Cowboys were a much more culturally diverse group than is usually thought. New research using U.S. Census records suggests that the racial makeup of cowboys included: Black, 25 percent; Latino, 15 percent; and “Indigenous,” 20 percent. These are all guestimates and probably vary by region but give a vastly different picture than in pop culture.

People who live far away from towns and cities are often overlooked, especially when they are marginalized by race and ethnicity. They are rarely mentioned in the newspapers unless they get into trouble; we are fortunate that so much is known about Thornton Biggs. The pay was low, on average $1 per day, the work was long, and not everyone wanted to do it. This left space for someone like Biggs who clearly loved working around horses, and gained respect from his peers.

One of the prized possessions of the Laramie Plains Museum is Thornton Biggs’ saddle, which is often on exhibit. Though not fancy, it is very well made by hand with leather tooling and extra attachments for holding ropes and tools. It shows signs of frequent use and good care. This saddle was a gift of the Holly Hunt family in 1971, one of the earliest donations after the Laramie Plains Museum opened.

This story is largely adapted from research published in the fall 2020 issue of the Laramie Plains Museum newsletter.

Konnie Cronk is the museum curator. Stories in this series are archived on the website wyoachs.com, of the Albany County Historical Society.