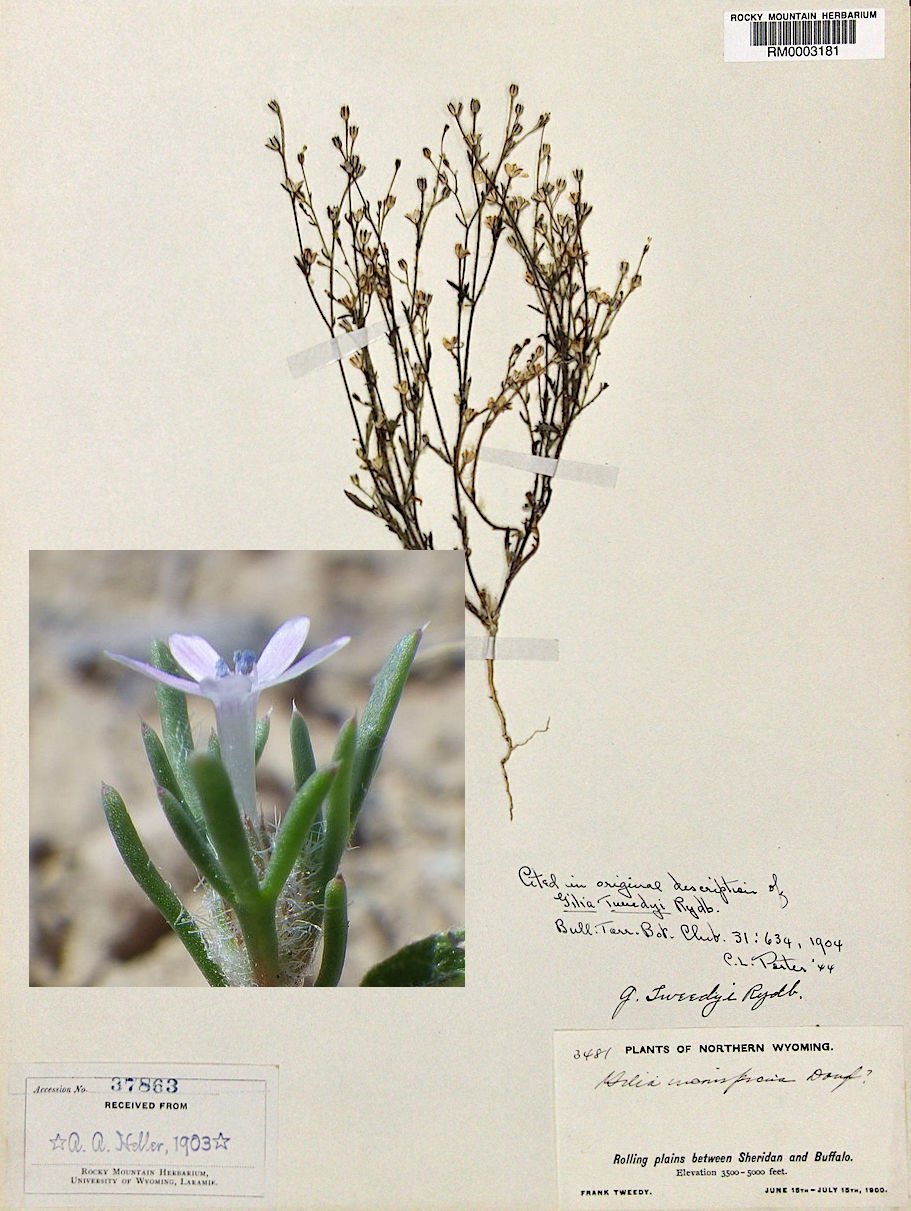 Tweedy’s gilia (Gilia tweedyi), one of Tweedy’ novelties from the Bighorn Mountains. Specimen is about 8 in tall. 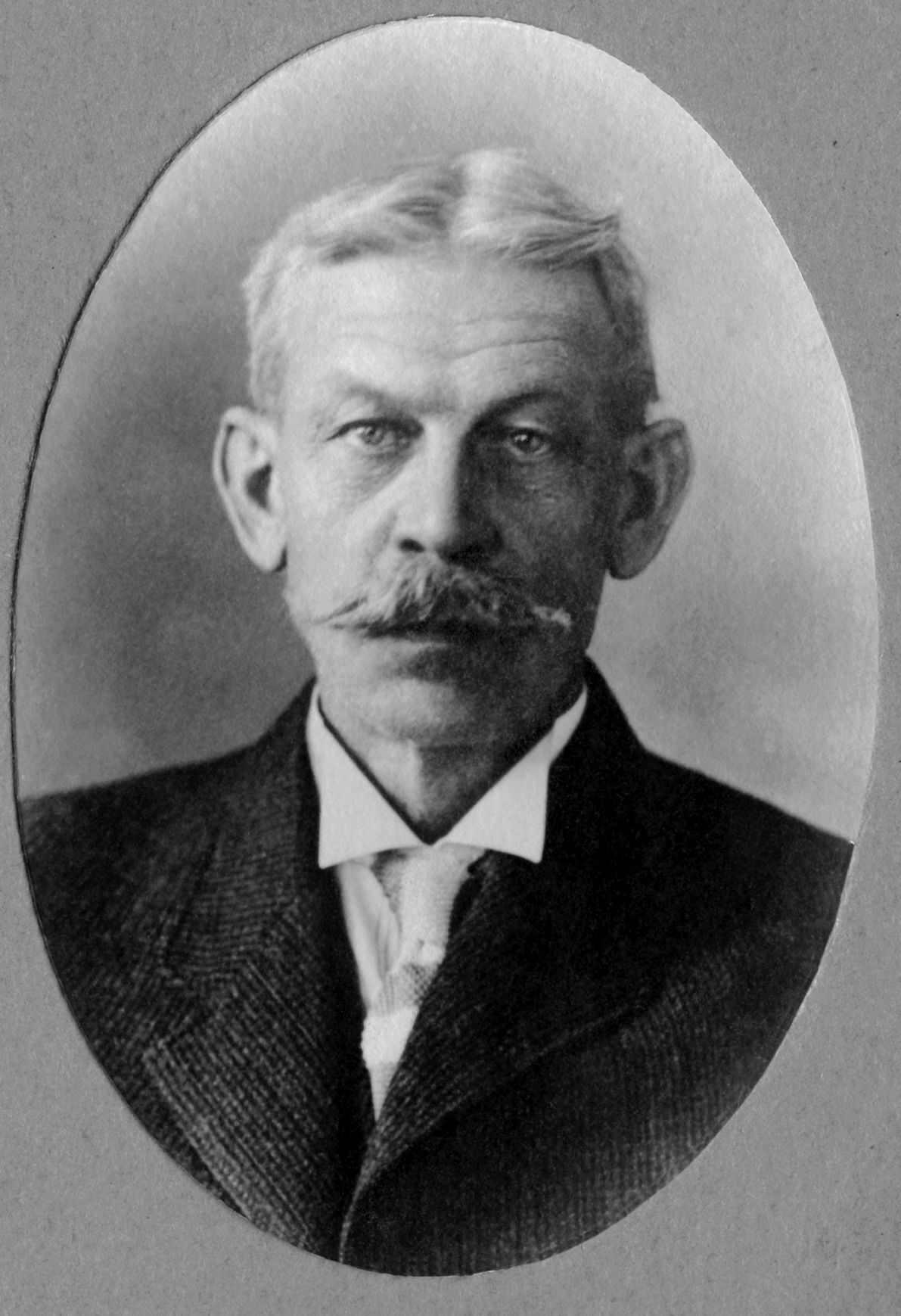 Tweedy’s gilia (Gilia tweedyi), one of Tweedy’ novelties from the Bighorn Mountains. Specimen is about 8 in tall.

Readers of this history column may remember Frank Tweedy of the U.S. Geological Survey, who surveyed the Laramie Plains in 1892. In August of that year, the Laramie Boomerang announced that Tweedy and assistant James McFarland would “commence work upon the topography of this section of the country.” Three years later, the “Laramie Sheet” was published — one of the first topographic maps for Wyoming.

On Jan. 14, 1903, there again was a Frank Tweedy in the news. “Prof. Nelson (University of Wyoming) has received a rare collection of plants from Mr. Frank Tweedy ... a botanist of considerable distinction” reported the Laramie Republican. Were USGS surveyor Frank Tweedy and distinguished botanist Frank Tweedy one and the same? And how did 700 plants survive a trip to Laramie in January?

Actually, survival was not an issue for these plants, for they were already dead. But they still were of great value. All were collected in 1900 in the wilds of the northern Bighorn Mountains. There they were carefully arranged in paper folders so that parts needed for identification were visible, and placed in a plant press with absorbent felt sheets until dry (several days to several weeks, depending on weather).

Sometime after the field season, they ended up at the New York Botanical Garden, where the great botanist, Per Axel Rydberg, either identified them, or, if they were new to science, named them himself. Then in 1903, “upward of 700” arrived in Laramie, each accompanied by a label with the plant’s name, collection location, date, and collector — Frank Tweedy.

At the university there was more processing, for dried plants are fragile, and won’t last long if left loose in paper folders. They were mounted on 11 x 18-inch sheets of durable paper, preserving them for centuries to come and properly filed in the university herbarium.

If you don’t know what a herbarium is, you’re not alone. Few people do. Many think it’s some kind of greenhouse, but actually it’s the opposite — a collection of pressed dried plants. The first, called a “hortus siccus” (dry garden), was created in the 1520s by Italian botany professor Luca Ghini. He wanted a way to teach plant identification in the winter, so he pressed and dried plants and glued them to paper sheets. Fed up with their ancient textbooks, Ghini’s students loved him for it.

Today, students still use herbarium specimens to learn to identify plants. But they took on a much bigger role during the golden era of global exploration (16th–19th centuries) — documentation of the world’s flora. Herbaria proliferated and flourished. Now there are at least 3,300, holding nearly 400 million pressed dried plants!

By 1892, the University of Wyoming had been operating for five years with a botany professor (Aven Nelson) but no herbarium! This was unacceptable for the state’s only university. Fortunately, Experimental Station Supervisor Burt C. Buffum had been collecting Wyoming plants for several years, accumulating on the order of 500. Several hundred were set aside for an exhibit at the 1893 World’s Columbian Exposition in Chicago. As for the rest, University President Albinus Johnson directed Nelson to use them to start a herbarium.

Nelson knew little about plant identification and herbarium management, but that didn't slow him down. In 1899, he launched an ambitious project. For 14 weeks, he traveled Yellowstone Park by horse-drawn wagon, with his wife, two daughters and two students. They collected zealously, returning to Laramie with 30,000 specimens! Most were duplicates, to be sold or traded to fund and expand UW’s herbarium.

Before the trip, Nelson wrote to his esteemed colleague, Per Axel Rydberg at the N.Y. Botanical Garden, asking where in Yellowstone he should collect. Rydberg replied: “The flora of the park is, however, well worked up as several collectors have been in there ... The one that has done the most, however, is Frank Tweedy of U.S. Geological Survey. He spent two whole summers in the park.”

An eye for novelty

Frank Tweedy was born, raised, and educated in New York, graduating from Union College in 1875 with a degree in civil engineering. He began his surveying career the next year in the Adirondacks, followed by a stint as a sanitation engineer in Rhode Island. All the while, he collected plants.

If we follow Tweedy’s trail of herbarium specimens (accessible online), we go from New York to New Jersey to Rhode Island. But then we make a huge leap west. In 1882, Tweedy went to work as a topographer on the Northern Transcontinental Survey in Washington Territory. He also collected plants.

For Tweedy, this was a very different kind of botanical world, largely unexplored and rich in novelties — species new to science. He collected his first that summer, a grass from the Wenatchee Mountains. It was named Tweedy’s reedgrass (Calamagrostis tweedyi) by grass expert F.L. Scribner, who wrote: “Mr. Tweedy has been a careful and zealous collector of the plants of the various sections of our country which he has visited, and it is with pleasure that I dedicate this species to him.”

This was the first of more than 100 plant species discovered by Tweedy, and the first of at least 35 named in his honor. By the time his specimens arrived at UW in 1903, he was a highly-regarded pioneering botanist of the American West.

Herbarium in the news

Meanwhile the UW herbarium had grown rapidly, thanks to collecting by Nelson and his students, and acquisitions through purchase and trade. He convinced the trustees to make it a separate institution — the Rocky Mountain Herbarium (as it is today), with Nelson as curator.

By the early 1900s, Nelson and the Rocky Mountain Herbarium had become newsworthy. In May of 1902, the Rawlins Republican reported “(a set) of 800 Wyoming plants has just been forwarded to the Carnegie museum (Pittsburg) by Professor Nelson” who also “received an interesting collection of plants, some 300 in number, from Dr. Riser of Rawlins ...”. Even more notable, Nelson shipped a collection of potentillas (cinquefoils) to Germany, to “Dr. Theodore Wolf, a German botanist, who is preparing a monograph of all the species of the genus in the world.” In exchange, German potentilla specimens would be sent to the Rocky Mountain Herbarium.

In July, the Cheyenne Daily Leader had exciting news. “12,000 Specimens of Rare Herbs and Plants for the State University” had been collected in Nevada, New Mexico, Utah and Wyoming by Leslie Goodding, one of Nelson’s students. About 800 species were represented, including every botanist’s dream — species new to science (several were named in Goodding's honor).

According to the Boomerang, by September of 1902 UW’s herbarium contained 36,000 specimens — impressive given there were still just three buildings on campus (not counting barns and greenhouses). At the end of the year, when Nelson’s articles about saltbushes and hawthorns were published in the University of Chicago’s Botanical Gazette, the Laramie Republican proudly and rightly declared, “Prof. Nelson is a recognized authority on Rocky Mountain and western plants.”

Thus we shouldn’t be surprised that a botanist of Tweedy’s caliber would contribute a “rare collection of plants” to the Rocky Mountain Herbarium.

During my research for this article, I often imagined Tweedy and Nelson in conversation — the renowned western botanist encouraging Nelson’s ambitions. Did they meet when Tweedy was surveying the Laramie Plains in 1892? Or maybe they made arrangements in May of 1901, when the Personals section of the Boomerang reported, “Frank Tweedy of Washington is in the city” (no further details).

I searched and searched for correspondence between the two men, eager to find a climax for this story. Instead, I discovered that the Laramie Republican, or perhaps Nelson, had led me astray.

Examining Tweedy’s specimens at the Rocky Mountain Herbarium, I saw a puzzling label on the lower left corner of each: “Received from A.A. Heller, 1903.” As I would learn, Nelson didn’t receive the specimens directly from Tweedy. He bought them from Amos Arthur Heller. (Heller probably got them through a trade, but we can’t be sure.)

A fantastic bargain just the same

Heller was an American botanist active from 1892 to 1940. The standard botanical sources include his professorships in Minnesota, California and Nevada, as well as work for prominent botanical institutions. But I knew nothing of his stint as a freelance plant dealer until I visited UW’s American Heritage Center, where I found a folder of letters from Heller to Nelson.

On Dec. 3, 1902, Heller wrote from Puerto Rico: “If you care for them, I have a collection of 700 Wyoming plants collected by Frank Tweedy, which I will sell for $45.00. There are a lot of new species among them (named) by Rydberg, and I understand he (identified) the whole collection. I am giving you the first chance at these, as I know they will be of more value to you than any one else.” He then advised, “If you want the Wyoming plants, Mrs. Heller (in Pennsylvania) will attend to sending them.”

Apparently Nelson jumped at the opportunity. In a letter dated Dec. 29, E. Gertrude Heller wrote: “I will ship you the plants at once ...”, which she must have done since they arrived sometime before Jan. 14, when their story appeared in the news.

Surely Nelson was happy with his purchase — nearly 700 specimens representing 500+ species, collected by a highly-respected botanist. And, as the Republican explained, “As not more than three of these sets of plants are in existence this herbarium is fortunate in securing one” (the others went to the National Herbarium and the N.Y. Botanical Garden).

Furthermore, “since (Tweedy’s) work carries him into many places, inaccessible to the ordinary collector, his plants are unusual and interesting.” The Republican was correct. A dozen of the specimens were species new to science! Obviously Frank Tweedy was very good at spotting botanical novelties, even while surveying.

Editor’s Note: Hollis Marriott is all but retired, after working for 40 years as a field botanist in Wyoming and South Dakota. Now she has time to enjoy her other interests, including natural history and the history of scientific exploration of the American West. Most recently she has been plugging Frank Tweedy — perhaps our most underappreciated pioneering botanist. For more, see his Wikipedia page. This article is archived on the website of the Albany County Historical Society, at https://www.wyoachs.com.