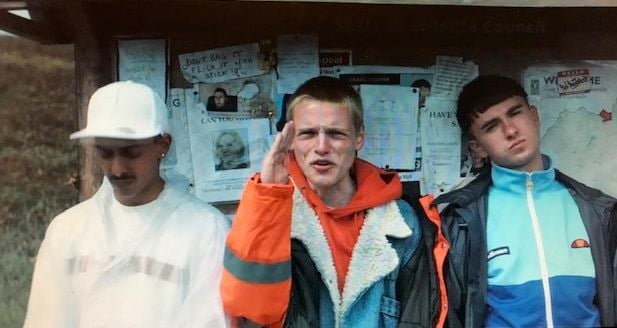 Three of the main characters in Ninian Doff’s debut film “Get Duked!” (2019) now available for streaming on Amazon Video.

Three of the main characters in Ninian Doff’s debut film “Get Duked!” (2019) now available for streaming on Amazon Video.

Short film and music video director Ninian Doff makes his feature directorial debut with his dark comedy, “Get Duked!” and it is familiar … but has less innovation and individuality to be considered a “cult comedy.”

The movie is high-energy from start to finish and for 40 minutes tries too hard to be anarchic and individualistic.

Three delinquents and one overachiever end up aimlessly gallivanting through the highlands wearing plastic ponchos and eating powdered soups to avoid being murdered by two senior citizens wearing masks seemingly made of flesh while one carries a rifle and the other carries a sword.

Believe it or not, not one of these outrageous plot components is the issue with the film; the pointless insistence of drug usage is. It’s clearly drawing inspiration from Danny Boyle’s “Trainspotting” (1996) but doesn’t deliver.

In “Duked,” the initial hash use is well-placed and serves a purpose: four teens wandering unsupervised in the highlands are, of course, going to get high, thus consumption acts as a catalyst for the inaccurate perceptions about the masked murderers and their surroundings. It fits. No grievance there.

But after an encounter with farmers, Doff decides to carry the drug use further and the characters begin eating rabbit feces that contain high amounts of fermented wild mushrooms.

The extremity of intoxication in “Duked” after it fulfills its original purpose, adds unnecessary substance to the movie with no purpose.

The zany plot in “Duked” is also heavily influenced by films such as “Hot Fuzz” and “Shaun of the Dead,” but shortly after the first 45 minutes I wondered if it’s possible to have a U.K. cult comedy without Simon Pegg, Nick Frost or Jim Broadbent.

The answer is yes, and the one thing deserving of appreciation is the immaturity of the film, both with the teen characters themselves and the stereotypes Doff is presenting to his viewers.

Teens, as my father, Dr. Zarzuela would say, don’t have fully developed brains yet and make dumb, irrational decisions. They are, as my uncle the engineer would say, BDTs (brain-dead-teenagers).

Doff highlights both of these typical characteristics with quick and raw dialogue between the four friends. The audience gets a genuine laugh at the dumb rationalization the characters work through and for older viewers, its nostalgic and familiar, which makes it funny.

All-in-all, “Get Duked!” isn’t a terrible movie, but its efforts are wasted in all the wrong areas. Its attempts to avoid mainstream (a general characteristic of cult films in) are too obvious and relies on the wrong tools to carry the plot.