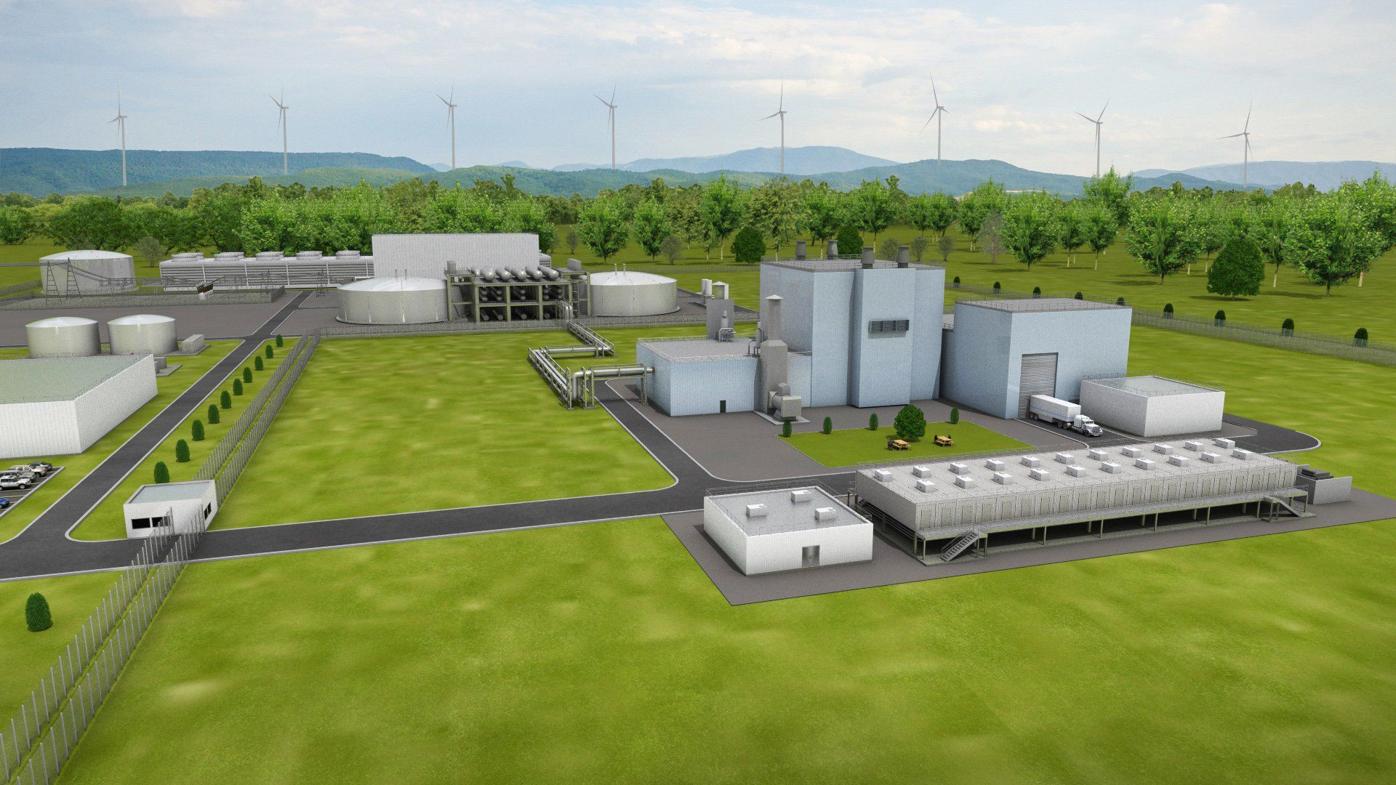 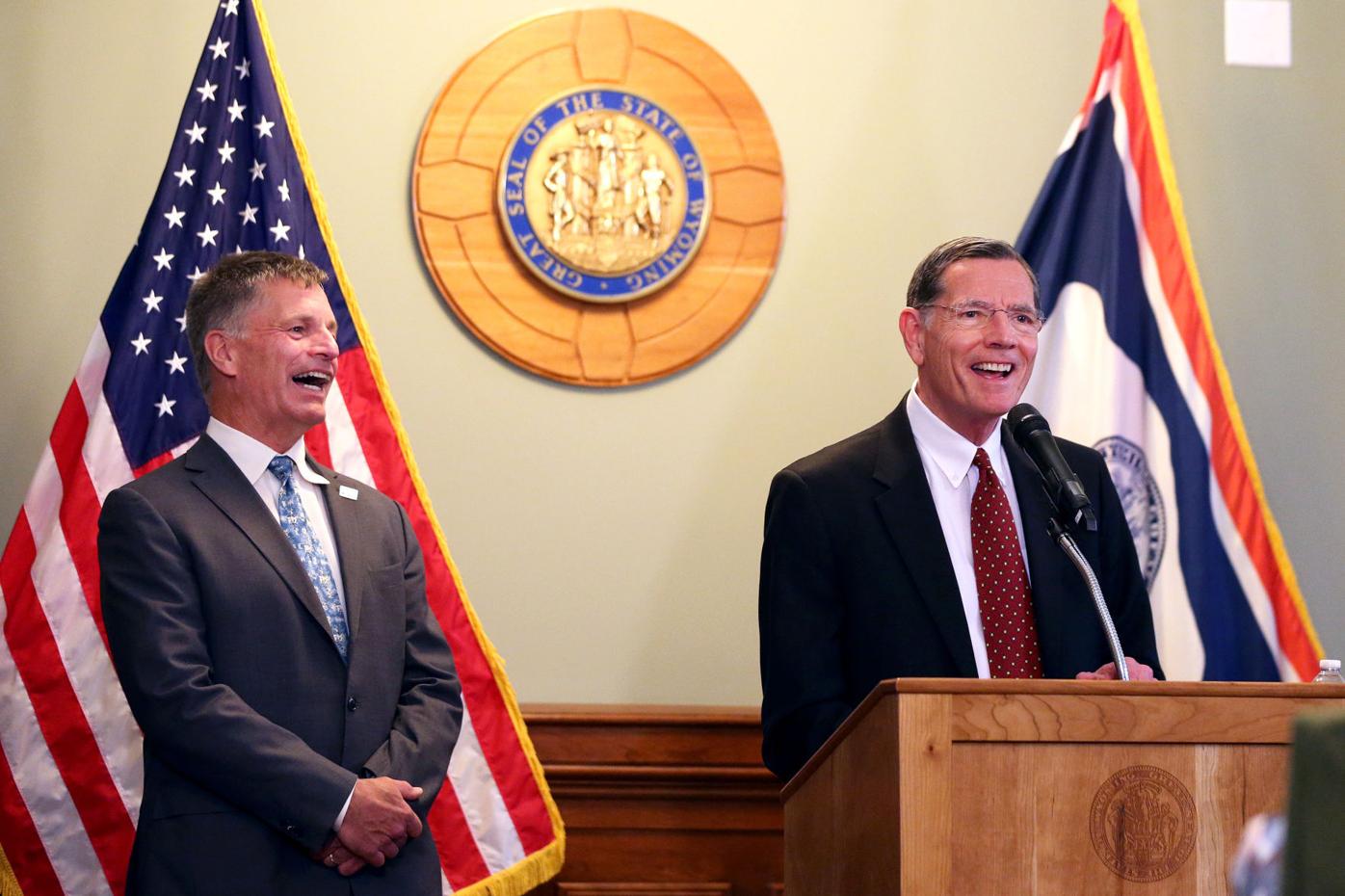 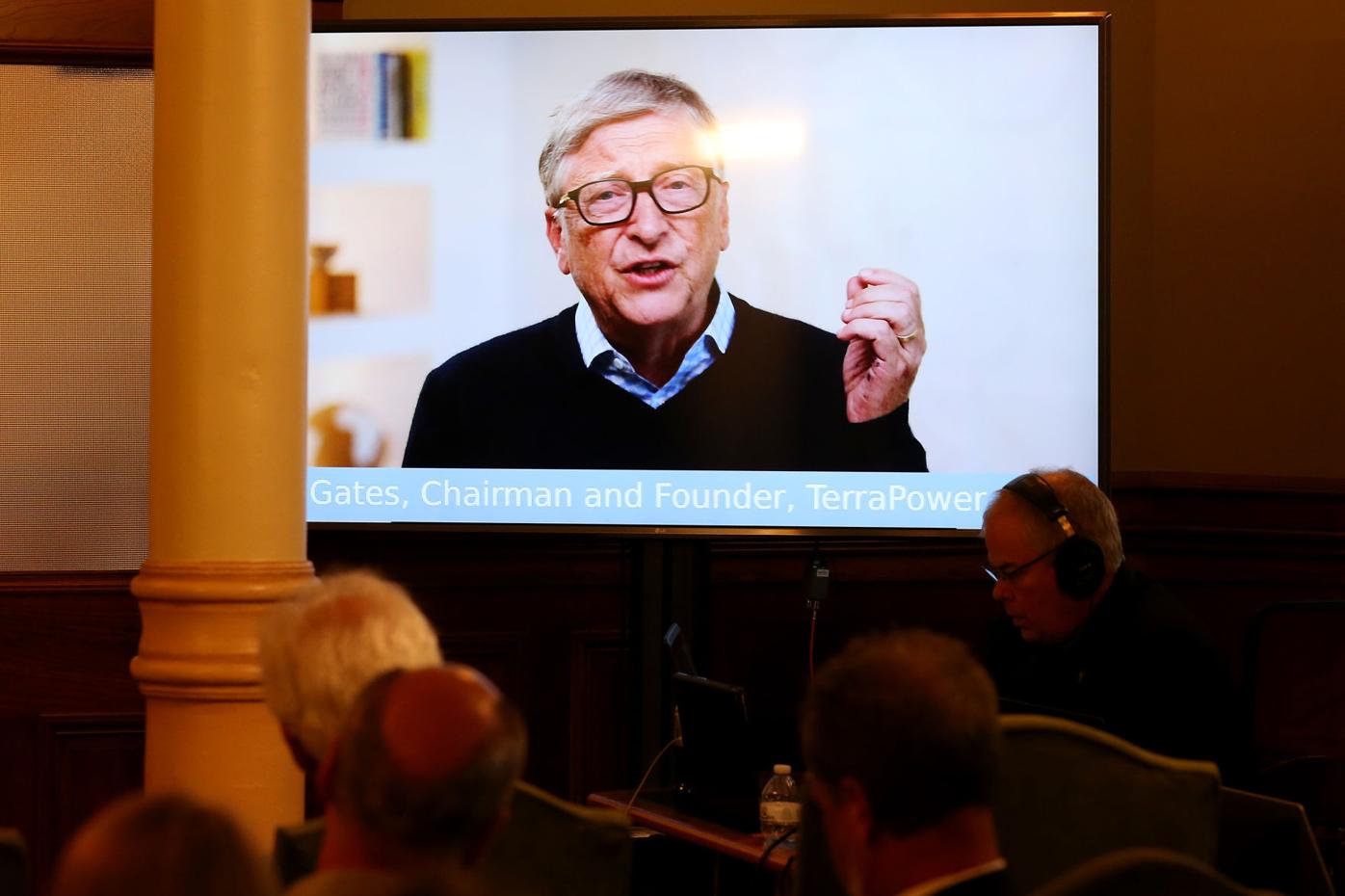 TerraPower Founder and Chairman Bill Gates speaks to the crowd in a recorded video message during the press conference announcing efforts to advance a Natrium reactor demonstration project at a retiring coal plant Wednesday, June 2, inside the Wyoming Capitol in downtown Cheyenne.

TerraPower Founder and Chairman Bill Gates speaks to the crowd in a recorded video message during the press conference announcing efforts to advance a Natrium reactor demonstration project at a retiring coal plant Wednesday, June 2, inside the Wyoming Capitol in downtown Cheyenne.

CHEYENNE — Wyoming will become the site of a novel nuclear energy plant in a move announced Wednesday by Gov. Mark Gordon that could diversify the state’s economy and put the nation on a path toward a carbon-free electricity grid by 2035.

TerraPower — a cutting-edge nuclear innovation company that is the brainchild of Microsoft Corporation co-founder Bill Gates — will build the first of its planned series of Natrium reactors within the next decade at the site of a current coal-fired power plant, with the potential to create hundreds of good-paying jobs and trigger a larger shift away from coal-powered energy.

“This first-of-its-kind nuclear facility maintains Wyoming’s position as a leader in energy,” Gordon said at Wednesday’s announcement. “It will also be built and operated in a manner that supports our commitment to protecting and enhancing our wildlife and our environment.”

The partnership between the state of Wyoming, TerraPower, PacifiCorp’s Rocky Mountain Power and the U.S. Department of Energy was made possible by bipartisan support at both the state and federal levels, providing climate solutions and technology to fill gaps left by coal in fossil fuel-focused states.

The technology differs from that of traditional nuclear energy facilities and is a new advancement, according to University of Wyoming energy economist Rob Godby. The Natrium plant will be demonstrative in nature, and received $80 million in initial funding from the U.S. Department of Energy’s Advanced Reactor Demonstration Program.

If it works and is economically viable for utility companies, it could be implemented on a wider scale across the nation.

“This should be one of those game-changing projects that proves the technology and allows Wyoming to be the beneficiary of being the early adopter and the pioneer in the field,” Godby said.

For Wyoming, the project will also breathe new life into one of the four current Rocky Mountain Power coal-fired power plant sites across the state — near Rock Springs, Kemmerer, Glenrock and Gillette — with the location being announced later this year. Though the symbolism might suggest Natrium technology will eventually replace coal in Wyoming, Godby said it will only help fill the gap in Wyoming revenues, and Gordon emphasized the state will continue supporting coal operations.

The technology will, however, make a difference in wages and tax revenues for the community it inhabits, Godby said.

“One power plant, or potentially several in the state, will not reverse the decline (of the fossil fuel industries), but they will make dramatic impacts in the local communities,” he said. “So this is not going to solve those tricky tax questions that we still have to answer, but it will certainly make a difference for families. It will create high-paying jobs in these communities — the types that are lost when you shut down a power plant.”

The technology also solves a problem that exists with other green energy sources.

Wind and solar power are often unreliable because they cannot be stored. For a utility company like Rocky Mountain Power, they need to know they’ll have enough power for the grid 24 hours a day, seven days a week.

The Natrium reactor allows for that energy storage in a much smaller, more modular setting than traditional nuclear plants, according to company officials.

TerraPower leaders also tout Natrium technology as being significantly safer than previous nuclear technologies, relying on a sodium coolant and a natural generation process that does not require backup generators.

“This Natrium reactor shows that the future of nuclear energy is here,” U.S. Energy Secretary Jennifer Granholm said, appearing virtually at the news conference. “This reactor is going to boost the flexibility with grid-scale energy storage, and it’s going to allow for improved integration with renewable power to drive clean energy forward across the country.

“I have a feeling that Wyoming won’t be the only state angling for one of these nuclear reactors once we see it in action,” she said.

With the current rate of climate change and the slow decline of coal, which is devastating for Wyoming’s coal communities, Godby said, “This is potentially better than doing nothing.”

“This is a day that is going to probably create some hope in Wyoming, and we haven’t had a lot of that lately,” he said.

With a decade-long timeframe for the project, Godby said it could face political hurdles with changing administrations at both the state and federal level. Even so, Wyoming Energy Authority Executive Director Glen Murrell, formerly with the UW Enhanced Oil Recovery Institute, acknowledged those challenges and said he was “incredibly excited” about the announcement.

“This is the first time the nuclear industry has been challenged for quite some time, and this is a bit of a breath of fresh air for that entire industry,” he said. “But I think there’s a lot of challenges, a lot of work to be done, and the Energy Authority will do what we can to support them.”

The three big challenges faced by the nuclear industry today, Murrell said, are cost, safety and dealing with waste. Traditional nuclear plants are very large, but the smaller footprint of a Natrium plant means both a smaller capital investment and less waste, he said.

When it comes to safety, Godby added, people should keep in mind that nuclear power is “probably the most regulated sector in the economy.”

“These are modern reactors … We’re not talking about adopting 50- or 60-year(-old) technology and updating it. We’re talking about brand new technologies to fit the needs of the modern grid,” the energy economist said.

Still, some aren’t convinced they should view the project with such a rosy outlook. Marcia Westkott, chair of the Powder River Basin Resource Council, voiced concern about what she called an “experimental” and “unproven” nuclear reactor design — one not yet licensed by the Nuclear Regulatory Commission — coming to Wyoming. The national Union of Concerned Scientists also dug into the details of such newly proposed nuclear technologies and still has a number of concerns.

“If nuclear power is to play a larger role to address climate change, it is essential for new reactor designs to be safer, more secure, and pose comparable or — better yet — lower risks of nuclear proliferation and nuclear terrorism than the existing reactor fleet,” Edwin Lyman, a physicist and director of nuclear power safety for the Union of Concerned Scientists, said in a news release. “Despite the hype surrounding them, none of the non-light-water reactors on the drawing board that we reviewed meet all of those requirements.”

For the Powder River Basin Resource Council, Westkott said “many questions” remain, including cost, how much water it will need to operate and how its waste would be safely stored. She also cautioned championing the use of Wyoming uranium in nuclear energy operations.

“On the issue of uranium mining, we need to remember that these operations will not replace the revenue lost by coal’s decline. There are no royalties and very little severance tax generated from uranium mining, so communities will not realize a windfall from this endeavor,” Westkott continued.

U.S. Sen. John Barrasso, however, said the chance to use Wyoming-sourced uranium is yet another benefit to the state’s economy. Voicing his strong support of this measure, he said the Natrium project will position Wyoming as the home of the first efficient, carbon neutral energy source in the country, as well as maintain the state’s leading role in the industry.

“This country’s going to continue to depend on Wyoming energy for decades and decades to come,” Barrasso said.

Some additional comments from and reactions to Wednesday's announcement:

"This is an exciting opportunity for Wyoming to open a new chapter in the nuclear power industry. Advanced nuclear generation clearly fits the bill for zero-emission, reliable and dispatchable electricity necessary to power our country into the future. Wyoming is the nation’s leader in the production of domestic uranium. Our producers stand ready, willing and able to safely and responsibly provide the vital fuel for America’s next generation of nuclear power." — Travis Deti, Executive Director, Wyoming Mining Association

“This project is an exciting economic opportunity for Wyoming. Siting a Natrium advanced reactor at a retiring Wyoming coal plant could ensure that a formerly productive coal generation site continues to produce reliable power for our customers. We are currently conducting joint due diligence to ensure this opportunity is cost-effective for our customers and a great fit for Wyoming and the communities we serve.” — Gary Hoogeveen, president and CEO of Rocky Mountain Power, a business unit of PacifiCorp

"I commend Rocky Mountain Power for joining with TerraPower in helping Wyoming develop solutions so that our communities remain viable and continue to thrive in a changing economy, while keeping the state at the forefront of energy solutions." — Wyoming Senate President Dan Dockstader, R-Afton

“Together with PacifiCorp, we’re creating the energy grid of the future, where advanced nuclear technologies provide good-paying jobs and clean energy for years to come.” — Chris Levesque, president and CEO of TerraPower

"Wyoming has long been a headwaters state for baseload energy. This role is proving to be ever more important. This effort takes partnerships, and we welcome those willing to step up and embrace these opportunities with us." — Wyoming House Speaker Rep. Eric Barlow, R-Gillette

“Perhaps the most dangerous aspect of this latest claim of a ‘silver bullet’ to save Wyoming’s economy is that it once again diverts attention away from our very real crisis in revenue, jobs and community survival. Wyoming’s elected leaders have still not come forward with a real plan to address lost jobs, declining revenues and the dissolution of coal communities. This speculative feasibility study will not do that.” — Marcia Westkott, Chair, Powder River Basin Resource Council