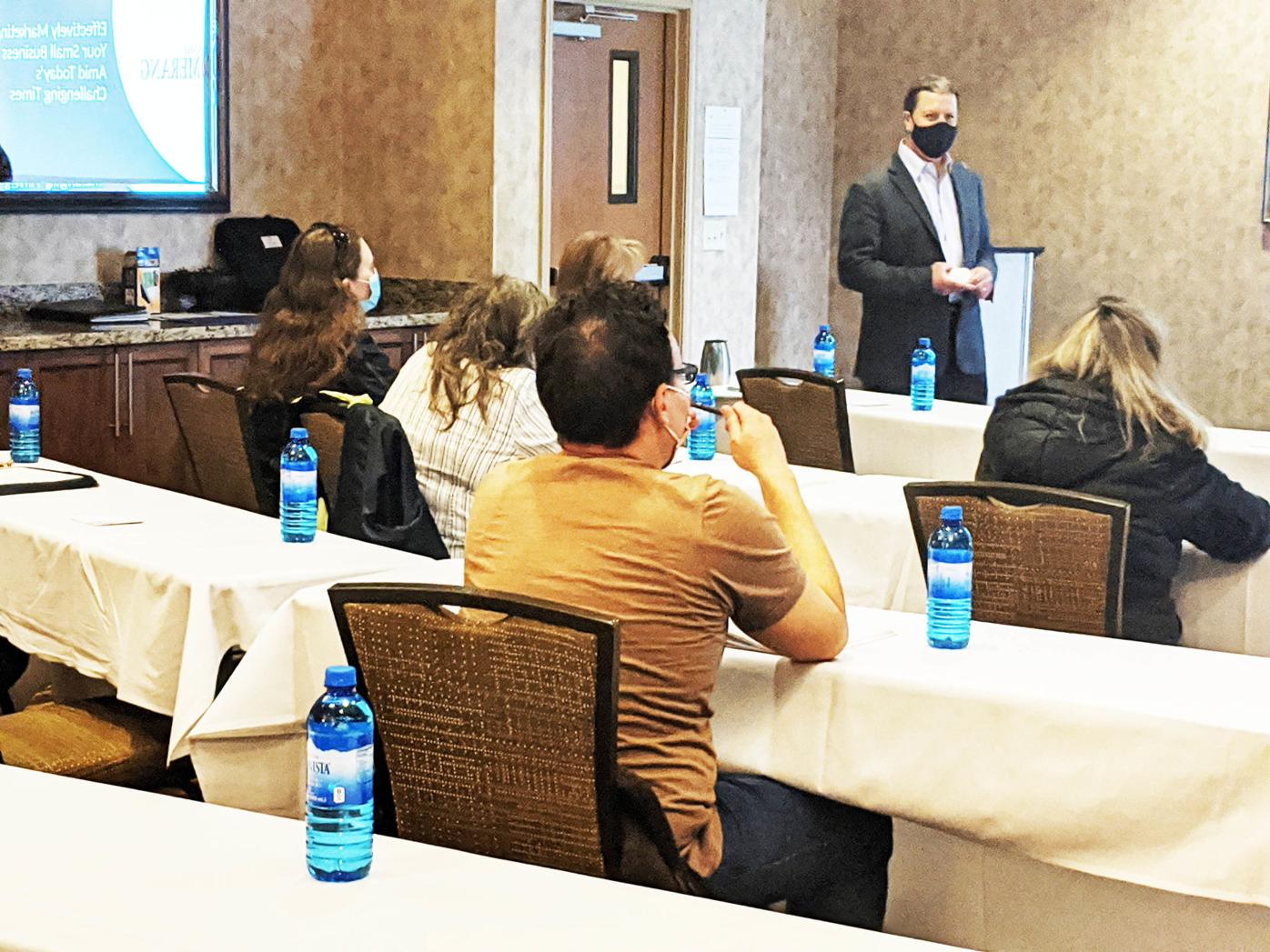 Mike Martoccia, standing, opens up his presentation at the free workshop sponsored by the Laramie Boomerang and the Laramie Chamber Business Alliance, held April 28 at the Holiday Inn. 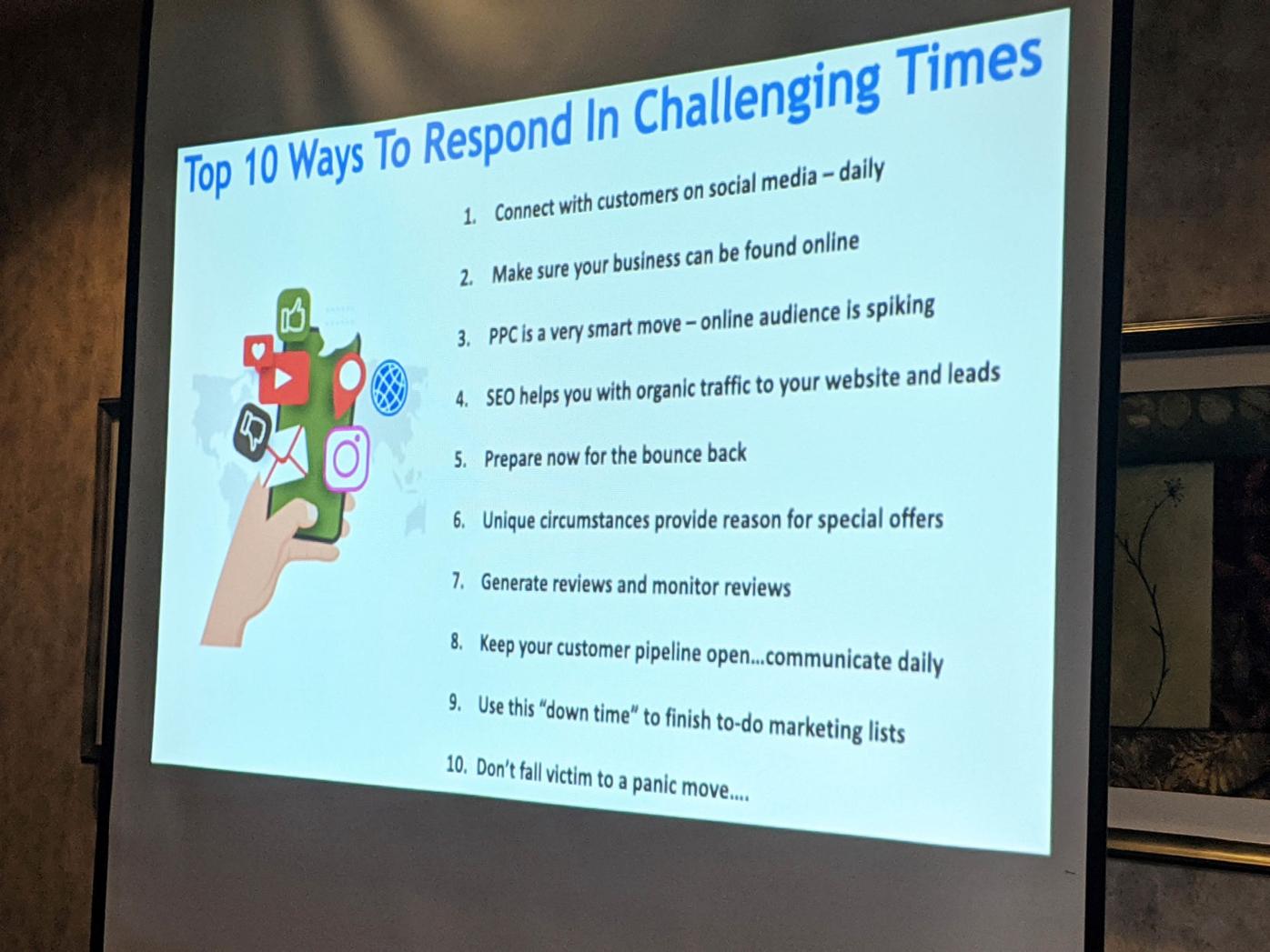 Making sure you’re site is at the top of the list when people go to the search engine is paramount, according to Mike Martoccia, who conducted a free digital workshop April 28 in Laramie.

Mike Martoccia, standing, opens up his presentation at the free workshop sponsored by the Laramie Boomerang and the Laramie Chamber Business Alliance, held April 28 at the Holiday Inn.

Making sure you’re site is at the top of the list when people go to the search engine is paramount, according to Mike Martoccia, who conducted a free digital workshop April 28 in Laramie.

Zane Little was among the people who took advantage and attended “How to Effectively Market Your Business in Today’s Challenging Times,” a free workshop sponsored by the Laramie Boomerang and the Laramie Chamber Business Alliance.

The focus of the workshop was to help people understand and learn how to maximize a business’s presence on the internet.

Little, whose business, juicyroots.com, involves CBD products was recently purchased from a friend who had set up shop in Colorado and had since moved to New York City; thus making this his introduction to marketing.

“I’m here to figure out how to more effectively advertise,” Little said. He added that he recently has begun advertising with the newspaper and that one of its account executives, had invited him to the workshop.

The presentation was led by Mike Martoccia, the vice president of digital sales and marketing for Adams Publishing Group, the parent corporation of The Laramie Boomerang (as well as the Cheyenne Tribune Eagle, The Rawlins Times and the Rocket Miner, out of Rock Springs).

“Thank you for carving out a little of your time today,” Martoccia said in his opening remarks. “There are a number of approaches in today’s business climate. I’m going to help you make sense of them.”

Martoccia went on to explain how for nearly three decades he has devoted his career helping more than 30,000 businesses reach potential.

He touched upon two important facets at the beginning of his presentation, which he employed PowerPoint. The first was the necessity to market and advertise, especially in a downturn, such as what this past year has been due to the COVID-19 pandemic.

It was done in a humorous way, with a quote (and artwork) from Henry Ford that essentially read that stopping marketing was equivalent to a person stopping a clock in an effort to halt time.

He than posed a question and asked those present to raise their hands if they ever did the following, which was go past the first one to three “pages” on the internet looking for a business. Not a hand was raised.

“Placement is of utmost importance,” he said. Also of importance was not to rely upon just “one basket,” a reference to the aphorism cautioning people never to place all their eggs in one basket. “Diversification is paramount, but it needs to be done wisely.”

“Everything you’re going to see today is what we can do for you,” he said. “I want you to walk away saying to yourself, ‘Wow, I didn’t know I should be putting my money there.’”

In a phone interview several hours later, Little said attending the workshop was worth the investment of his time.

“I definitely, I do, feel it was worth it,” Little said. “For one, it gave some insight on the inner workings of the internet.”

He also was impressed by the array of services provided by APG and plans on taking advantage of what he already is being provided, plus more.

For Kenya Johnson, who handles marketing and advertising for The Mortgage Source, the workshop was informative, yet one with which she was already familiar. Still, it was worth having attended, she said.

“It wasn’t new to me, but it did serve as a reminder of the things I need to work on,” Johnson said.

If you were not able to attend, you still can learn what was presented by contacting any of the following people: