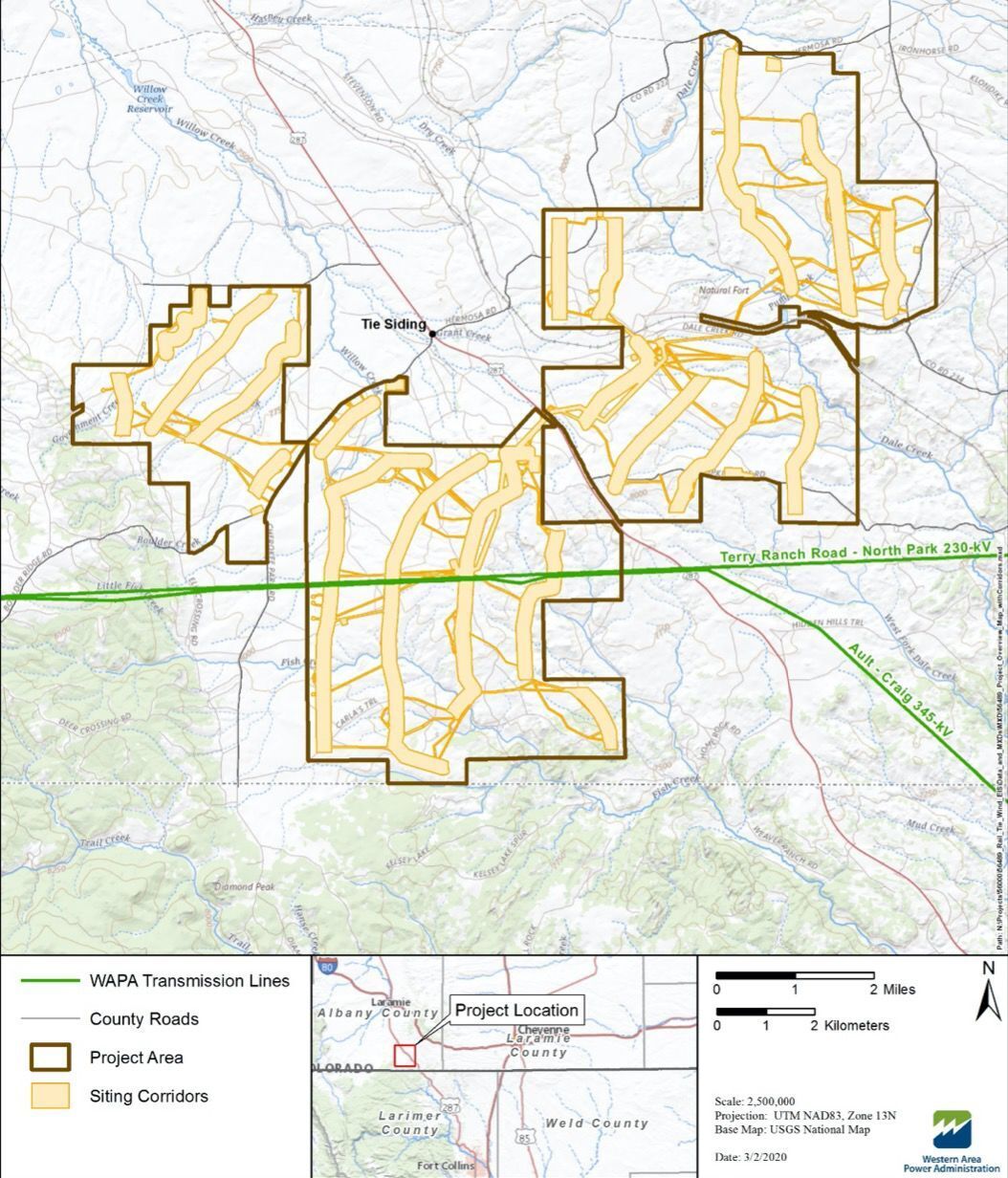 A map from the March scoping report for the Rail Tie Wind Project shows proposed locations for wind turbines near Tie Siding.

A map from the March scoping report for the Rail Tie Wind Project shows proposed locations for wind turbines near Tie Siding.

A planned wind development project around Tie Siding will have to wait for the Laramie City Council’s blessing, if that blessing ever comes.

Plans for the project have caused a rift between the company planning to build it, advocates of renewable energy in Albany County, and county residents who live near to the proposed construction site. It has already been a heated topic of discussion during Albany County Planning Commission meetings.

The city council postponed voting on a letter of support for the wind project during its meeting Tuesday, pushing that vote — and further discussion on the project — to late July.

“I don’t think that, as a council, we’ve discussed this enough to offer a letter one way or another,” council-member Jessica Stalder said. “I’m really glad we’re postponing.”

The $500 million Rail Tie Wind Project could generate more than 500 megawatts and occupy 26,000 acres of private and state lands, according to the project’s website and city documents.

Amanda MacDonald is the project manager for Rail Tie. She said support from the council is crucial given how divisive the issue has become.

“We would prefer to have the city speak up in support sooner than later, since this is an ongoing effort by the opposition to get the county regulations changed,” she said. “But ultimately, we respect the city’s decision to postpone the vote if they think that would be more appropriate.”

The council meeting opened with a lengthy public comment period, during which everyone who spoke shared thoughts on the wind project. Most spoke against the project, or at least in favor of delaying a vote on the issue until a later date.

Ruth Sommers said she had been a resident of Tie Siding for 30 years, and labeled herself a proponent of green energy. But she said the issue was “complex” and discussion surrounding it should be postponed.

“I’m not a person who does not want to see renewable energy in Wyoming,” Sommers said. “I just want to see it done in the right places.”

Others argued that the project would scare away developers or others looking to move into the area. Tony Kirchhoefer said there were other places in Wyoming better suited for wind turbines.

“I would say — as one of the people I think Laramie and the county are trying to attract to the area — we came here because of the stunning views,” he said. “I would not have bought my 105 acres, I would not have built my dream house, if this windmill project was planned or in the process or existing … The only reason you’re considering it is for the financial piece, but you’re not considering the financial impact for others.”

According to the project’s own estimates, the construction period would directly provide 113 jobs for Wyoming workers, while operating the wind farm thereafter would directly support 23 permanent jobs.

The project’s website estimates the project would bring in $14.6 million in tax revenue during construction, and $3.4 million annually thereafter, to Albany County.

The postponed motion highlights these tax and job figures as reason for supporting the project.

“In light of the city’s challenge of accommodating an increased population, the Rail Tie Wind Project presents a unique opportunity to generate substantial new economic development without overburdening the City’s infrastructure,” the letter reads.

The letter adds that the motion pairs nicely with the city’s recent commitment to go carbon neutral by 2050.

“The Rail Tie Wind Project will generate enough clean energy each year to power more than 180,000 homes,” it reads. “The project has not yet determined the customer for the power, but it will contribute to the City of Laramie’s shared goal of increasing clean energy and reducing carbon emissions, regardless of who ultimately receives the clean energy output.”

The project would not actually occur under the city’s jurisdiction. It would be located on land around Tie Siding and has already drawn vocal opposition from locals during Albany County Planning Commission meetings.

The planning commission declined to place a moratorium on wind facility construction, which had been suggested by opponents of the Rail Tie project. Those opponents argued the moratorium would allow the commission to modernize its regulations. MacDonald said new regulations would have hamstrung the entire project.

“They are actively pressuring the Albany County Planning and Zoning Commission to change the existing wind regulations,” MacDonald said. “And when you look at the specifics of what the opposition group is proposing … not only would it make a Rail Tie Wind Project impossible — it would effectively wipe out any wind development anywhere in the county.”

MacDonald said the presence and prominence of this opposition group motivated her and others involved with the project to approach the Laramie City Council and seek a statement of support.

The letter, if approved in July, would not give the project a green-light in any way, but would simply serve as a statement of support. However, some residents of Tie Siding, including Carol Wiles, were nonetheless pleased to see the vote postponed.

“I think your support of any project is influential and it should be well-informed,” Wiles said. “And I think that suspending the consideration of this until you are well-informed is appropriate.”

According to the project’s scoping report, ConnectGen is planning between 84 and 151 turbines, with heights up to 675 feet.

"When you look at the specifics of what the opposition group is proposing … not only would it make a Rail Tie Wind Project impossible — it would effectively wipe out any wind development anywhere in the county.” -Amanda MacDonald, project manager for the Rail Tie Wind Project