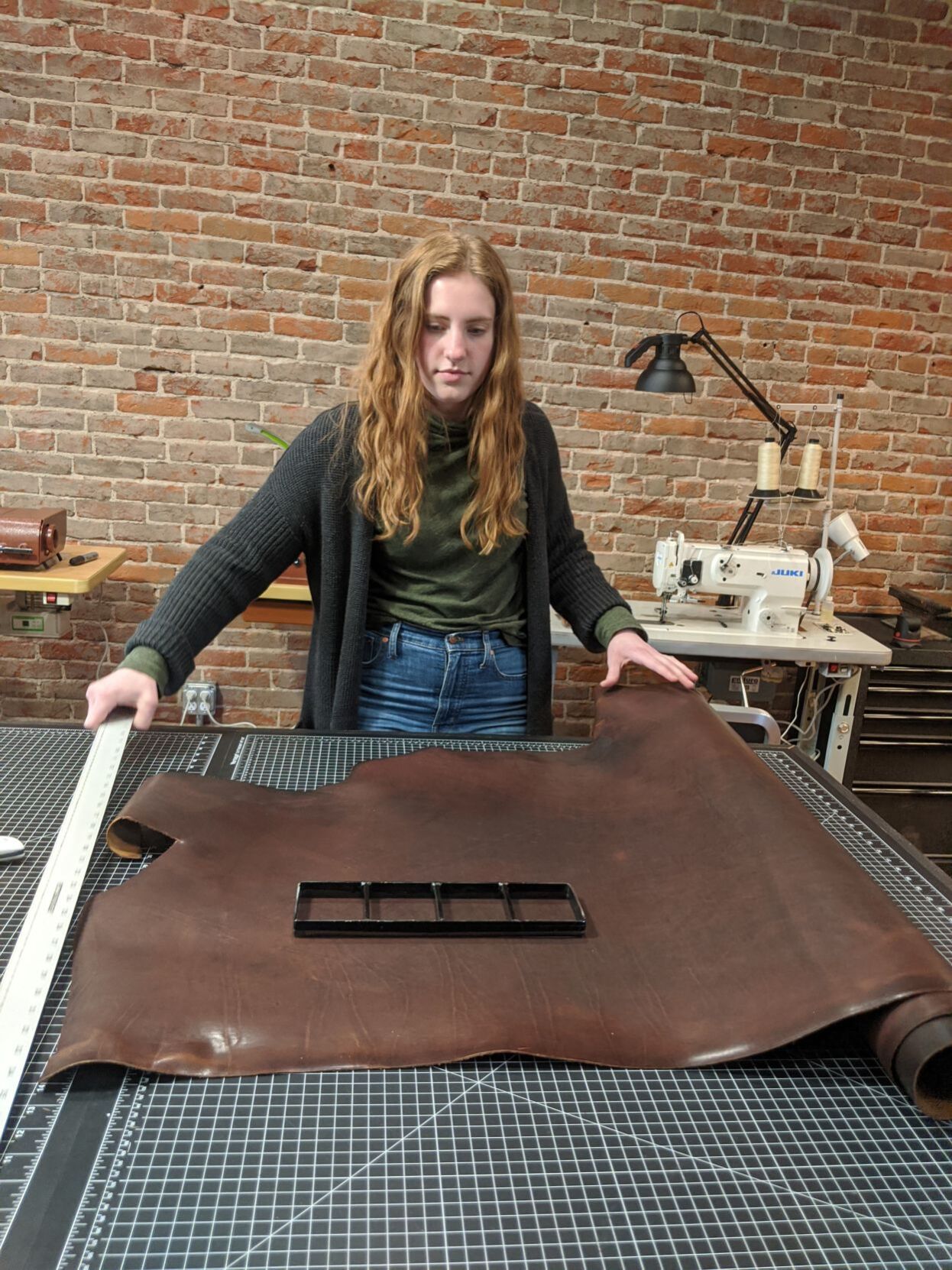 Emily Goertzen unfolds a bolt of leather that eventually will be made into a purse. 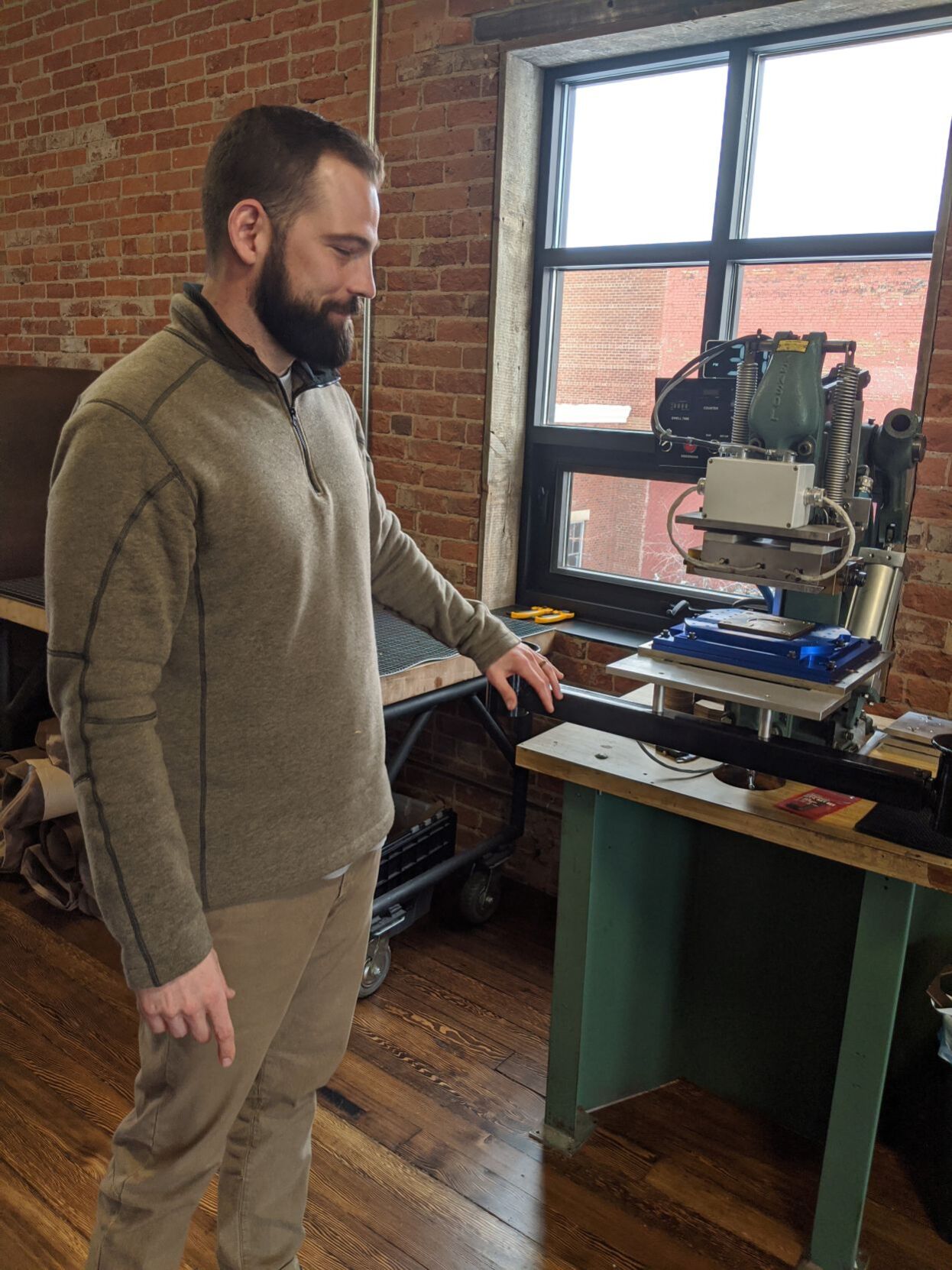 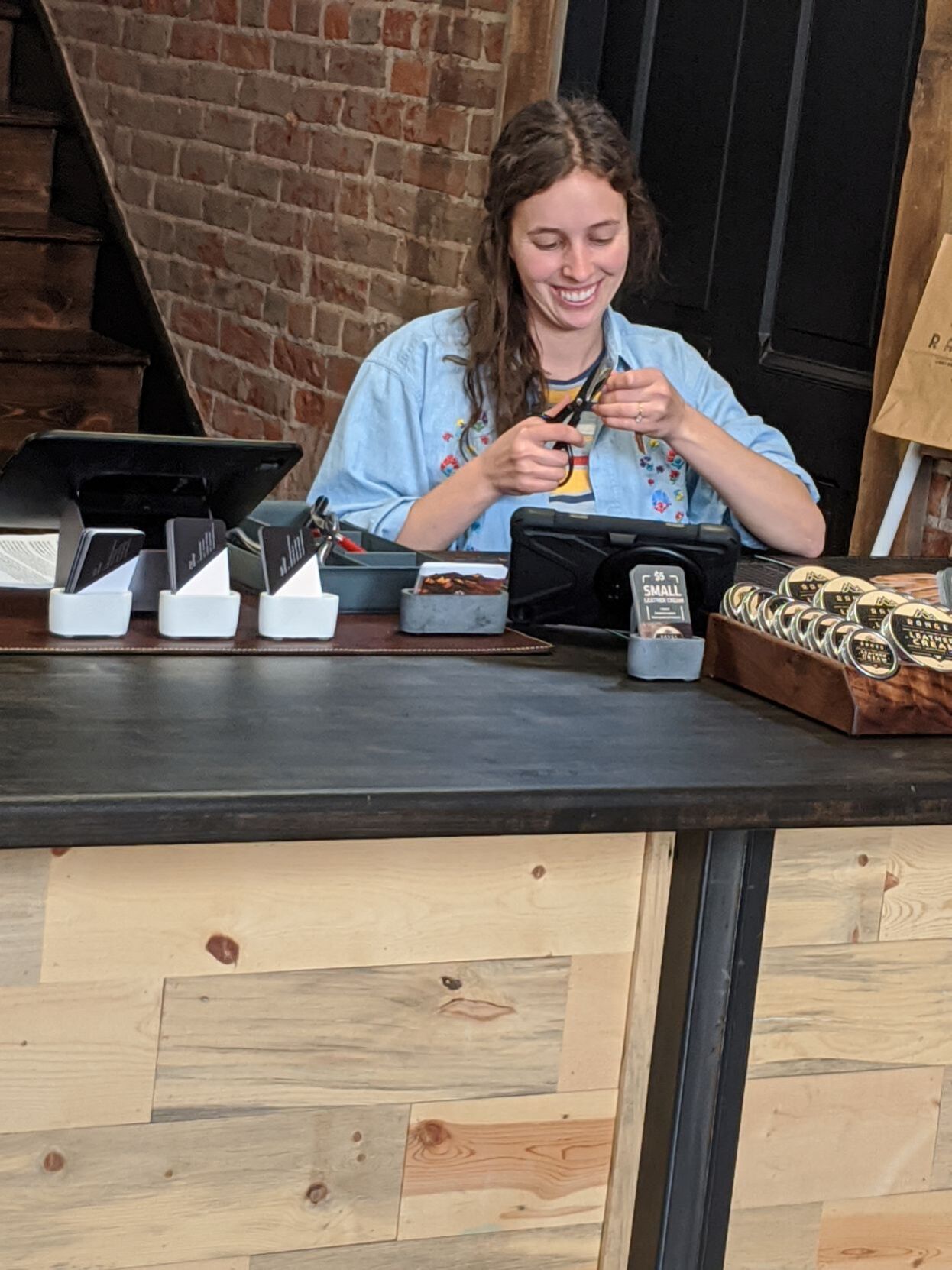 Danielle Taylor smiles as she crafts a pair of what eventually will be leather earrings. 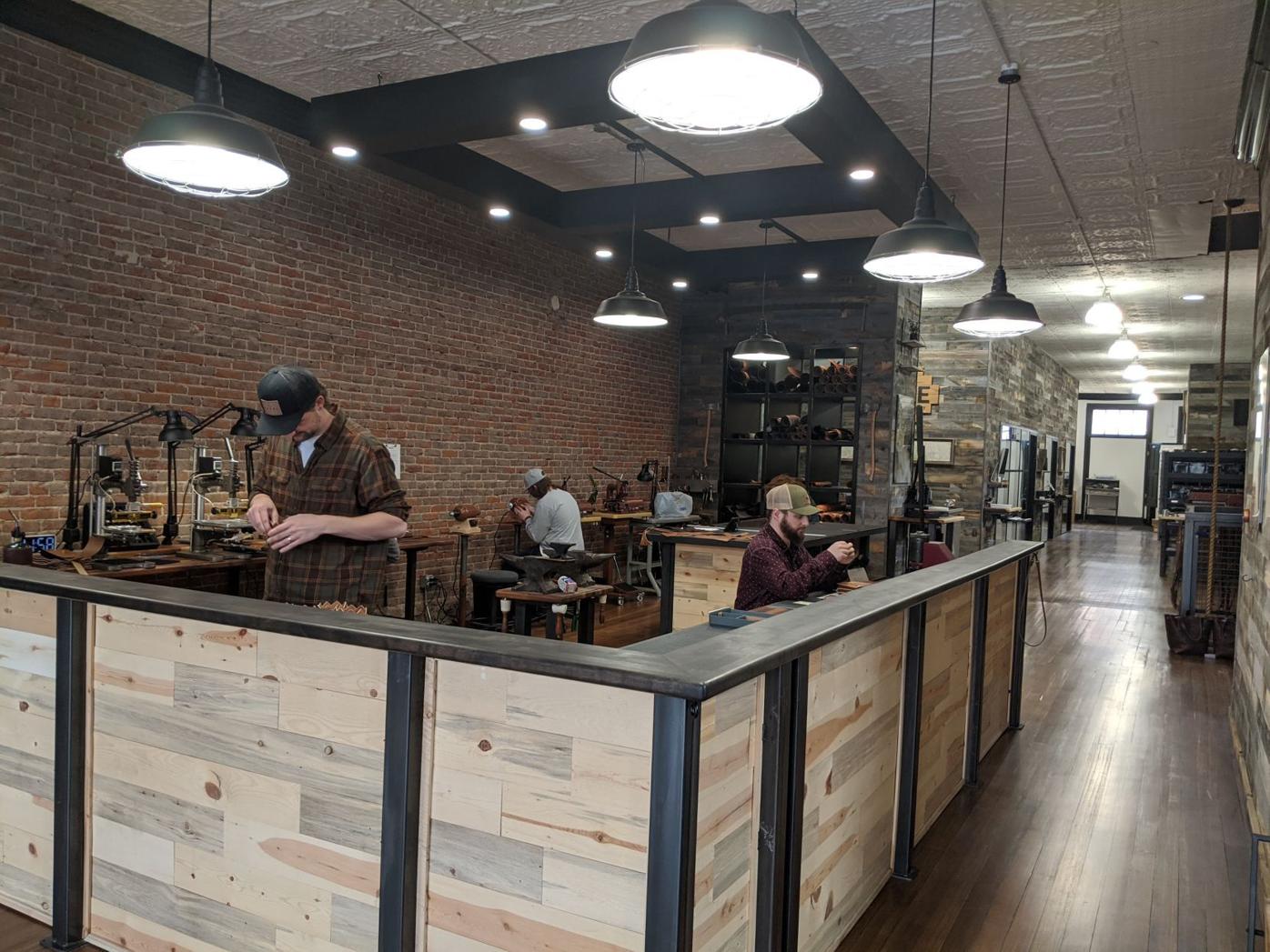 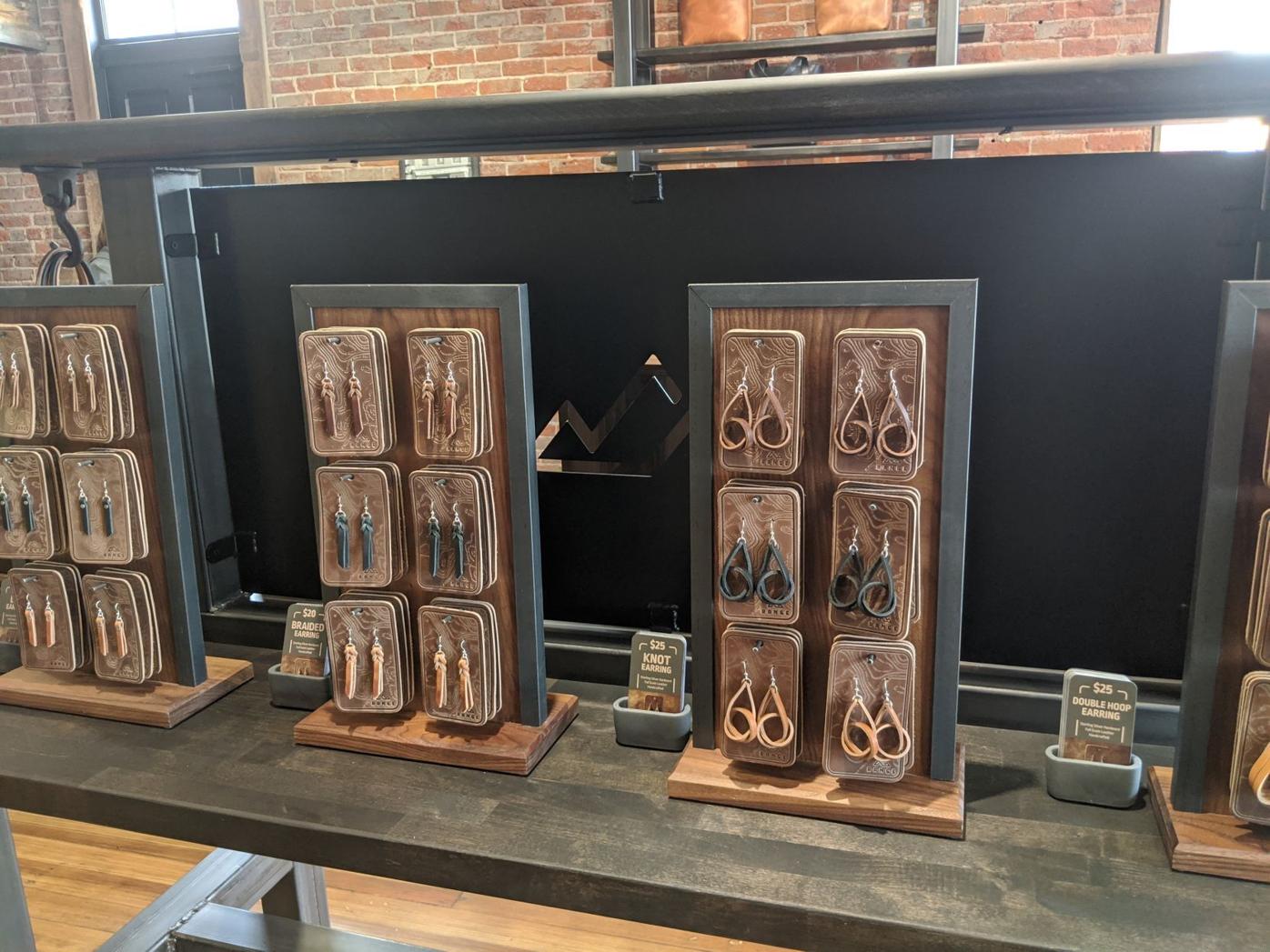 Among the number of leather goods crafted include jewelry, such as earrings. 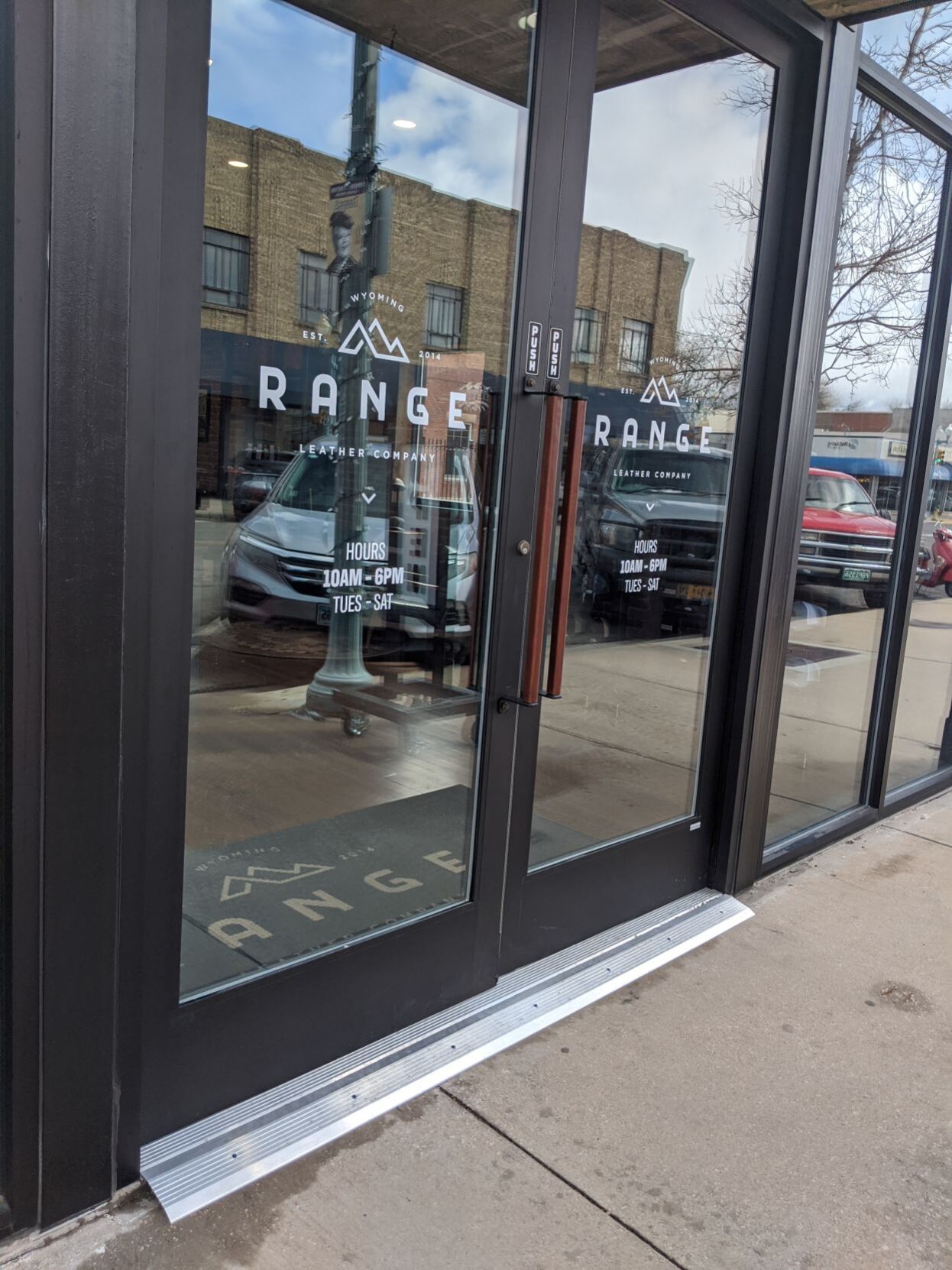 Unlike most entranceways in downtown Laramie establishments, to enter Range Leather, a person has to push, not pull, on the door.

Emily Goertzen unfolds a bolt of leather that eventually will be made into a purse.

Danielle Taylor smiles as she crafts a pair of what eventually will be leather earrings.

Among the number of leather goods crafted include jewelry, such as earrings.

Unlike most entranceways in downtown Laramie establishments, to enter Range Leather, a person has to push, not pull, on the door.

Unlike his previous business venture — one in which he never saw the actual process because everything was manufactured in China — Kyle Koster determined his latest business would be entirely different. Not only would he learn the process, but once that goal was accomplished, his operation would be entirely local; the exception being where he purchased material.

As is true of many business start-ups, he began in the kitchen of a small apartment in Spokane. He and his wife had moved there in order for her to complete her education and training as a physical therapist. Casting about for a hobby, Koster came across a via the internet a man named Stan, who conducted free training sessions on leathercrafting.

Stan, he said, was retired and looked like the archetypical “cowboy.” He had been working with leather nearly all his adult life. He was a fount of knowledge and wisdom and didn’t mind being badgered with questions by Koster.

“I would pick his brain, then try,” Koster said. “I learned best by trying.”

Upon he and his wife’s return to Laramie — they were introduced by a mutual friend during Jubilee Days — he set about going into business. He and his wife settled on 313 S. Second St. Owned at the time by Jon and Sheila Jonson, the building at one time had been a furniture store; in fact, a freight elevator remains at the back of the building and is fully operational. In its previous incarnation, the freight elevator was used to lift furniture from the ground floor to the second floor.

“He (Jon Jonson) heard we were looking for a space,” Koster said. “He and his wife saw the potential of what we wanted to do, the creative business. We purchased it in 2019.”

Since that time, as much of the original building, estimated to have been built in the 1890s, has undergone a restoration and renovation.

“Our goal for the building is to bring it back to what it was in the 1890s,” he said. That includes exposing the tin ceilings and the brick walls (which had been covered with plaster), and restoring the wood floors, which are original to the building.

Once the building was rehabbed to Koster’s satisfaction, he began the process of hiring. Currently there are 14 employees, and almost all of them came into the business with little, if any, experience.

“I would rather train people with high attention to detail, and have worked with their hands,” he said. The people at Range Leather began their apprenticeship November 2020. He added that he would rather have crafters than assembly line workers, and he still isn’t fully staffed.

“We have job openings,” he said.

One might think that being in Laramie that among the items crafted would be geared to products of a western theme, but that is not the case. Currently available are (baseball) hats, purses and wallets, leather jewelry, grooming items and the like.

The quality is such that all products carry a lifetime guarantee, Koster said.

Because the building that houses Range Leather is constructed in such a way that people coming in can actually see the process unfold before them, it makes for an unique experience.

“I think it’s a time lost method,” Koster said. He added that just recently a tourist from Washington, D.C., came into Range Leather and saw one of his employees, Emily Goertzen, working on a purse using two swaths of different colored leather. Ironically, as Koster spoke, that person came into the building.

“I kind’ve been looking for a bag for my wife,” Karl Kakadelis, the tourist from Washington, D.C., said.

Just about the only thing Range Leather doesn’t do is tan its own leather. That comes from a company based in Chicago, Horween Tannery.

“It began in 1905, and is a fourth generation family run operation,” Koster said. When it started, there were a number of tanneries located by the stockyards. “Today, it’s the last tannery remaining.”

Koster says what is unique about Horween Tannery is its tanning process. Whereas approximately 80% of leather is tanned using chemicals, at Horween the tanning process is vegetable tanned. It makes for a softer, more supple leather.