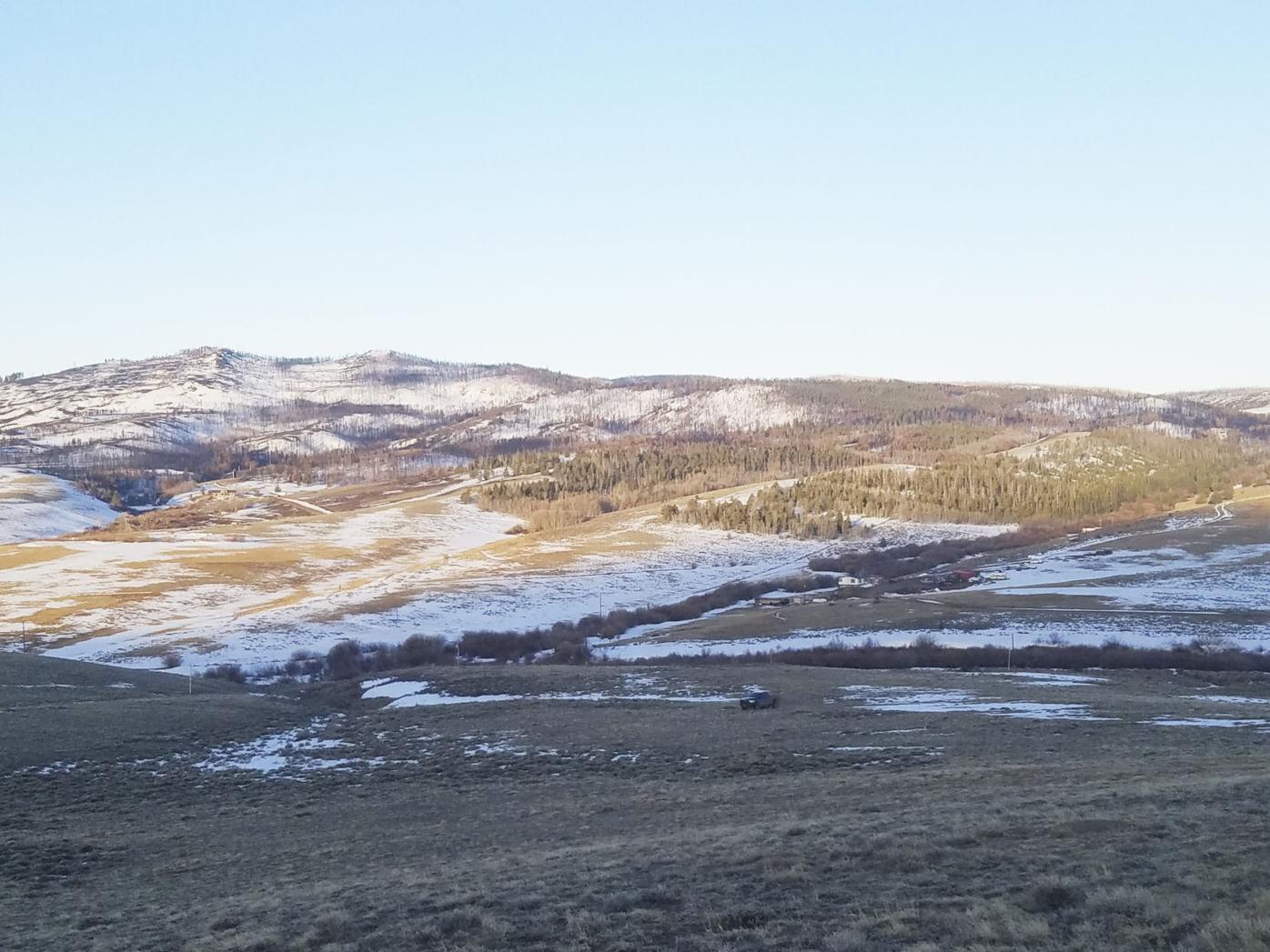 Smaller portion of Sheep Mountain Game Refuge south of Fox Creek. There is a burned area in the upper left. 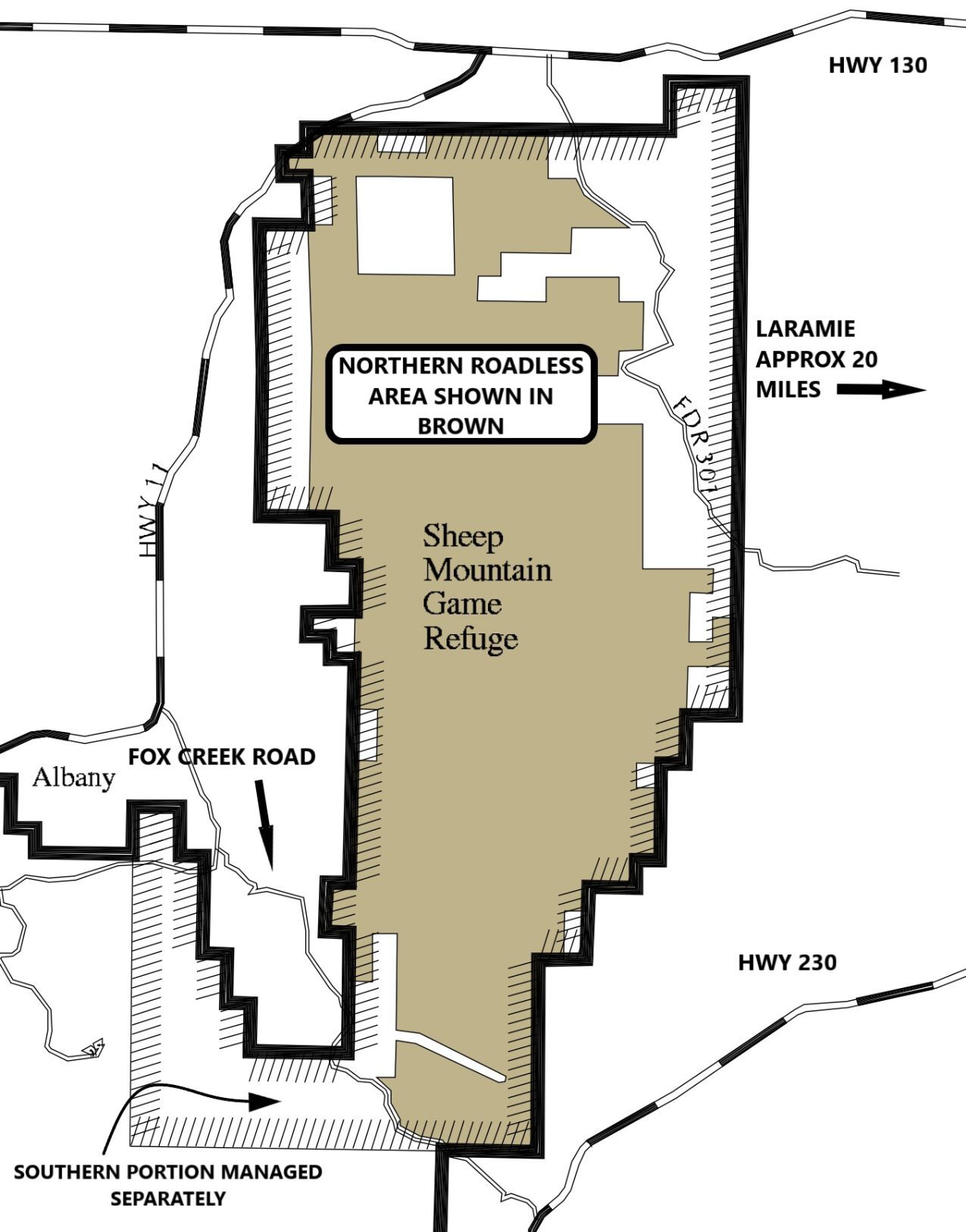 The area surrounded by hachured lines denotes the entire Sheep Mountain Game Refuge as proclaimed in 1924.

Smaller portion of Sheep Mountain Game Refuge south of Fox Creek. There is a burned area in the upper left.

The area surrounded by hachured lines denotes the entire Sheep Mountain Game Refuge as proclaimed in 1924.

Looking west from Laramie three prominent mountainous formations are visible. They are the usually snowcapped Medicine Bow Peak, Jelm Mountain with its reflective observatory building, and the long high ridge known as Sheep Mountain. What most people do not know is that nearly all of Sheep Mountain is a national game refuge. It is one of only a handful in the United States.

Need for refugeThe wanton destruction of big game animals in the American West, particularly the American Bison, has been well documented. In Wyoming, destruction of the big game herds began as soon as hide and meat hunters arrived. The slaughter was so great that once large herds of antelope, elk and deer were nearly wiped out over most of their range.

When the first session of the Wyoming Territorial Legislative Assembly convened, members moved to address the problem. Minimal restrictions, mostly unenforceable, were implemented. But it was not until the early 1900’s that strict law on harvesting game animals were enacted and game wardens were authorized and given legal status to enforce those laws. In 1910, the first call for a game refuge were reported in Wyoming newspapers, specifically for elk in Jackson Hole.

Refuge createdThe number of game animals in southeast Wyoming continued to decline. Especially hard hit by illegal hunting were deer and elk in the Medicine Bow National Forest. In response, in April 1915, a train carload of elk was moved from Governor Carey’s “Careyhurst” ranch on Box Elder Creek north of Laramie Peak to the Davis & Thomas ranch at Filmore west of Laramie.

However, the situation did not improve. The state game warden, Frank Smith, reported in late 1923 that in the entire Medicine Bow National Forest only about 700 deer were to be found. The Game and Fish Commission noted that establishment of game refuges would lead to better game herds.

Wyoming U.S. Senator John Kendrick from Sheridan learned of the situation and on Dec. 9, 1923, introduced Senate Bill 9, calling for adding Sheep Mountain to the Medicine Bow National Forest and declaring it a game refuge. The bill was taken up by the House of Representatives and finally passed in June 1924. Both votes were unanimous. On Aug. 8, President Coolidge signed a proclamation mirroring the law passed by Congress; Sheep Mountain Game Refuge was born.

The boundary of the refuge encompassed two separate parcels divided by Fox Creek. The Northeastern portion consisted of nearly 17,000 acres and the smaller southwestern portion about 2,500 acres. Both sections were under the same management rules set out by Congress.

Refuge managementThe bill laid out how the refuge was to be managed. There were four provisions in the bill. First, all public lands on Sheep Mountain were to be transferred to the Forest Service and that the area be designated a refuge for game and birds.

Second, no hunting or “molestation” of any game animal or bird was allowed in accordance with rules set up by the U.S. Secretary of Agriculture. Third, violation of those rules would result in hefty fines. Fourth, properties previously homesteaded were excluded from the refuge.

Local supportThe management plan garnered support from various segments of Albany County. Ranchers in the area told the Laramie newspaper that the refuge was a good idea and could stop poaching and over grazing on the mountain.

The Albany County Sportsmen’s Club endorsed the idea immediately after Kendrick’s bill was introduced. Additional support came from the business community with the newspaper touting the virtues of the refuge and opined that it would lead the area to be a “new Estes Park.”

Hunting allowedWhile hunting of non-game animals continued in the Sheep Mountain Game Refuge, including predators, by the early 1940s the situation changed. The Game and Fish Commission reported that the number of deer in the refuge had grown to the point that a hunting season was needed to reduce the herd and protect the habitat. Both parcels are open in 2021 for deer, antelope and elk hunting with restrictions on doe mule deer.

Change in managementIn the early 1970s the larger portion of the refuge north of Fox Creek was declared a roadless area. At some point a further decision was made to manage the smaller part of Sheep Mountain Game Refuge differently than the much larger portion north of Fox Creek Road. In December of 2003, Medicine Bow National Forest published a Revised Land and Resource Management Plan for the refuge.

The approximately 17,000-acre parcel lying north of Fox Creek and east of the smaller parcel is being managed as a semi-primitive “Special Wildlife Area.” It also continues to be managed as a non-motorized area.

However, it also falls within the recently enacted Medicine Bow Landscape Vegetation Analysis Project. Under those regulations it appears that mechanical logging operations may take place along the boundary of the parcel to the distance of about 1,000 feet into the parcel. No temporary roads may be constructed. For most of the boundary, permission would also need to be obtained from owners of private land that lies between the boundary and the nearest public road for logging operation to take place. A grazing allotment is also authorized for Sheep Mountain Game Refuge lands.

Approximately 2,500 acres of the Sheep Mountain Game Refuge lies south of Fox Creek Road. Under both the 2003 management plan and the landscape vegetation project, the entire area has been determined to be crucial deer and elk winter range. Operation of motor vehicles (including snowmobiles) is prohibited from Oct. 1 through June 15 yearly.

However, summer motorized use is allowed at other times. The forest management plan infers that significant travel has occurred off established roads such as Forest Road 517 and mitigation efforts are desired. Logging would be allowed.

Potential future impactsWildfires have plagued Medicine Bow National Forest recently. Both parcels of the Sheep Mountain Game Refuge have experienced burns that have destroyed habitat critical to the goals of the refuge.

Given beetle kill stands of trees and periodic drought, fires are likely in the future. There is also unauthorized off-road vehicle activity in the smaller portion of the refuge south of Fox Creek.

Fine backcountryAvid local hiker Andy Bryson reports that the area is excellent for those wishing to access the northern parcel of the refuge, which provides good semi-primitive hiking that is close to Laramie.

From the public access trailhead on Fox Creek Road, Bryson notes that the route follows an old two track across open prairie and through the Squirrel Creek Fire scar generally parallel with Fence Creek. The trail then continues north, crossing into the head of the Hecht Creek drainage which flows to the west.

There are many short climbs and descents, though the elevation stays at or above 9,000 feet for most of the hike. The route is much the same for Buckeye Creek, scrambling up and down. Once out of Buckeye, the terrain becomes more gently rolling before entering the upper reaches of John’s Creek which flows to the northeast. This is a very steep walled canyon. Luckily, the trail skirts around and climbs to the crest of the northern end of Sheep Mountain and ends with a very steep descent to the trailhead on Wyoming Highway 11. All-in-all, a relatively long, tough hike — one with challenges for the experienced hiker who knows that appropriate precautions need to be taken when hiking through standing dead trees that may be unstable.

Editor’s note: Research assistance was provided by Al Johnson and Robb Hitchcock. Kim Viner is a sixth generation Laramie native, a veteran Commander in the U.S. Navy and a volunteer docent and historian at the Laramie Plains Museum.