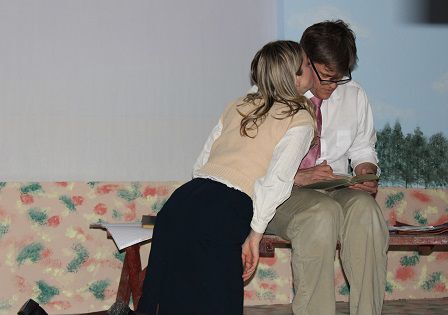 Noelia Berkes and Peter Parolin rehearsing a scene from “The Care and Feeding of Small Animals.” 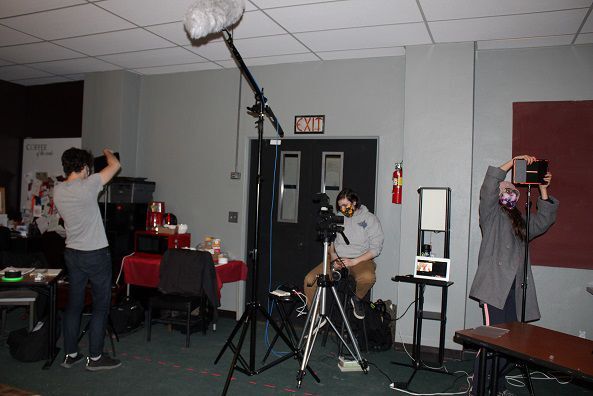 (From left) Justin Glover, Kendall Yoder and Isa Jakowich setting up lights for a cue-to-cue tech rehearsal in the Relative Theatrics studio Sunday at the Civic Center.

Noelia Berkes and Peter Parolin rehearsing a scene from “The Care and Feeding of Small Animals.”

(From left) Justin Glover, Kendall Yoder and Isa Jakowich setting up lights for a cue-to-cue tech rehearsal in the Relative Theatrics studio Sunday at the Civic Center.

Due to the lingering effects of the conronavirus pandemic, Anne Mason — founder and artistic director of Relative Theatrics — decided to translate the script into a film. Naturally, there are many obstacles that come with such a project, however, Mason and her team have learned from previous movie productions how to successfully film a script designed for a stage.

RT had to pivot into a hybrid filmed theater space, Mason said, and she really had to be selective about the scripts she wanted to produce.

“So many of the plays we were planning to do this year weren’t going to translate and they wouldn’t be able to move into this (hybrid) sphere,” she said, adding some scripts just need to live in the theater.

Mason adapted quickly though and started looking for shorter plays with smaller casts. She also wanted a story that lived in the abstract.

“We can really rely on imagination or non-linear storytelling or nontraditional plot structures [because] they leave room for interpretation,” Mason said.

Once “The Care” was selected, actors Peter Parolin — Dean of the University of Wyoming’s Honor College — and Noelia Berkes (working actress of New York City) signed on, Mason said they started looking at individual scenes to understand what they needed from a technical standpoint.

Every week for approximately six weeks, she and her design team brainstormed which elements of technical storytelling could be filmed in real time, and which elements could be edited in post-production. Much of the planning revolved around working out lighting setups and projection cues and occurred long before actors or cameras were introduced.

“Normally, the tech process in the theater is a week-long period before audience members view the play,” said Mason, adding, during that week they have several rehearsals and can troubleshoot and correct technical glitches in time with a full cast.

“We don’t have that luxury in (film format) so it really needed to be tackled in pre-production,” Mason said.

IN FRONT OF THE CAMERA

Parolin and Berkes discussed their first night with the technical equipment and said translating the artistic elements of live performance to the screen can be challenging.

“We’re taking a script that is meant to be three-dimensional and figuring out how to render it on video,” Parolin said prior to a cue-to-cue tech rehearsal.

The stage had a strip of neon green tape marking the parameters of the frame and Parolin said being on stage doesn’t necessarily mean you’re in frame.

“You have to really remember where your boundaries are,” he said.

Berkes added the lack of an audience while filming makes it slightly harder to keep a character energetic and lively.

“I have to make my character performance bigger because I have to find that energy myself and within (Peter) … and feel if something is working,” Berkes said, adding actors are sensitive to the energy of a live audience and can discern if they are receiving a performance or not.

There’s a lot you can learn from an audience about what good artistic elements you have in a show, Parolin said. The reactions and interactions between actors and audience members make each performance different.

“Sometimes you don’t realize a line is funny until your audience responds … you learn what the great moments are.”

Stage Manager Alex Soto, said that Sunday’s rehearsal was just a tech run and begin filming on Monday. She also mentioned it was a condensed version of their normal tech rehearsals because they were more focused on blocking light changes and projections.

“Tonight is the first night with all of our tech … so we’re just making sure nothing is going to fall apart,” she said.

Soto said filming “The Care” is easier in some ways, but only because of thorough and well-thought out pre-production planning. Over the course of three hours, Parolin and Berkes — who were more like mannequins than actors — tried on costumes and tested out props; Mason remote-directed from a computer; and a light and projection designer meticulously adjusted various light fixtures on stage and behind the scenes to slowly bring “The Care and Feeding of Small Animals” to life.

Relative Theatrics was founded by Laramie native Anne Mason in 2013 and strives to present thought-provoking theater that examines the human condition. Audiences are small, typically 50 people, and are seated on the stage.

“The Care and Feeding of Small Animals” is available for streaming Feb. 12-28.

For more information or to purchase tickets, visit www.relativetheatrics.com.