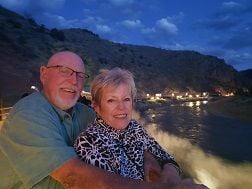 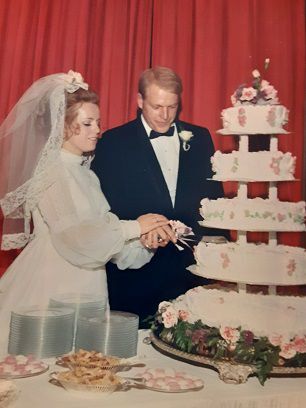 The couple met as youngsters at St Paul’s Lutheran where their parents were members. They later dated while Don attended Casper Junior College and Margaret was a student at Cheyenne Central High School.

They got married May 8, 1971 at St Paul’s Lutheran Church in Cheyenne with a reception at Little America Hotel & Resort.

After having graduated from Casper College and attending the University of Wyoming, Don joined the Naval reserves and the newly wed couple moved to San Diego, California. Their first child, Joshua, was born in 1972. After two years, they moved back to Cheyenne and continued working. In 1975, another son, Adam, was born. Don and Margaret took turns attending the University of Wyoming to earn their bachelor degrees.

With grown children and after working hard in their professions (Donald is a retired director of administrations and human resources for Colorado Engineering and Experimental Station and Margaret is a retired special education teacher for Laramie County School Districts 1 and 2) they retired in 2014 and 2015.

These days, the pair belongs to Highlands Presbyterian Church and spends winters in Casa Grande, Arizona before coming home to Cheyenne in the summer months. They have four grandchildren.

Donald and Margaret celebrated their anniversary by touring Colorado’s Royal Gorge via the Royal Gorge train with their loved ones.

comments powered by Disqus
This page displays the most recent milestones from each section. To see more please click "View More..." below each section.

Add your obituaries with us.

Let us announce your engagements.

Let us announce your wedding.

Let us announce your anniversary.

Let us show off your little one's birth.