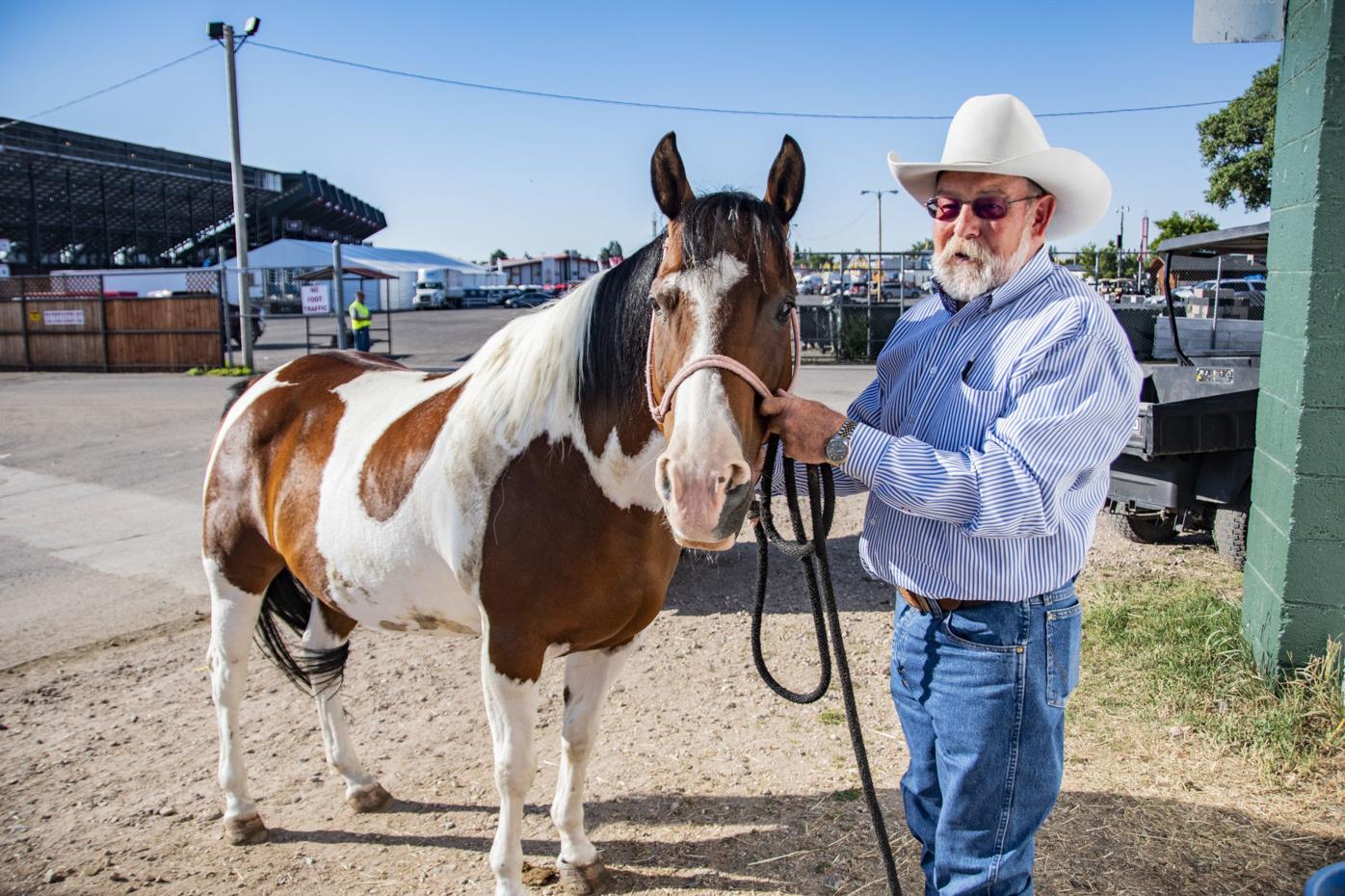 Volunteer Chuck James takes Kiwi to be washed completely with soap and water. Kiwi is used by the Military Committee chairman in the parades and grand entry at the rodeo. Rachel Girt/For the Wyoming Tribune Eagle 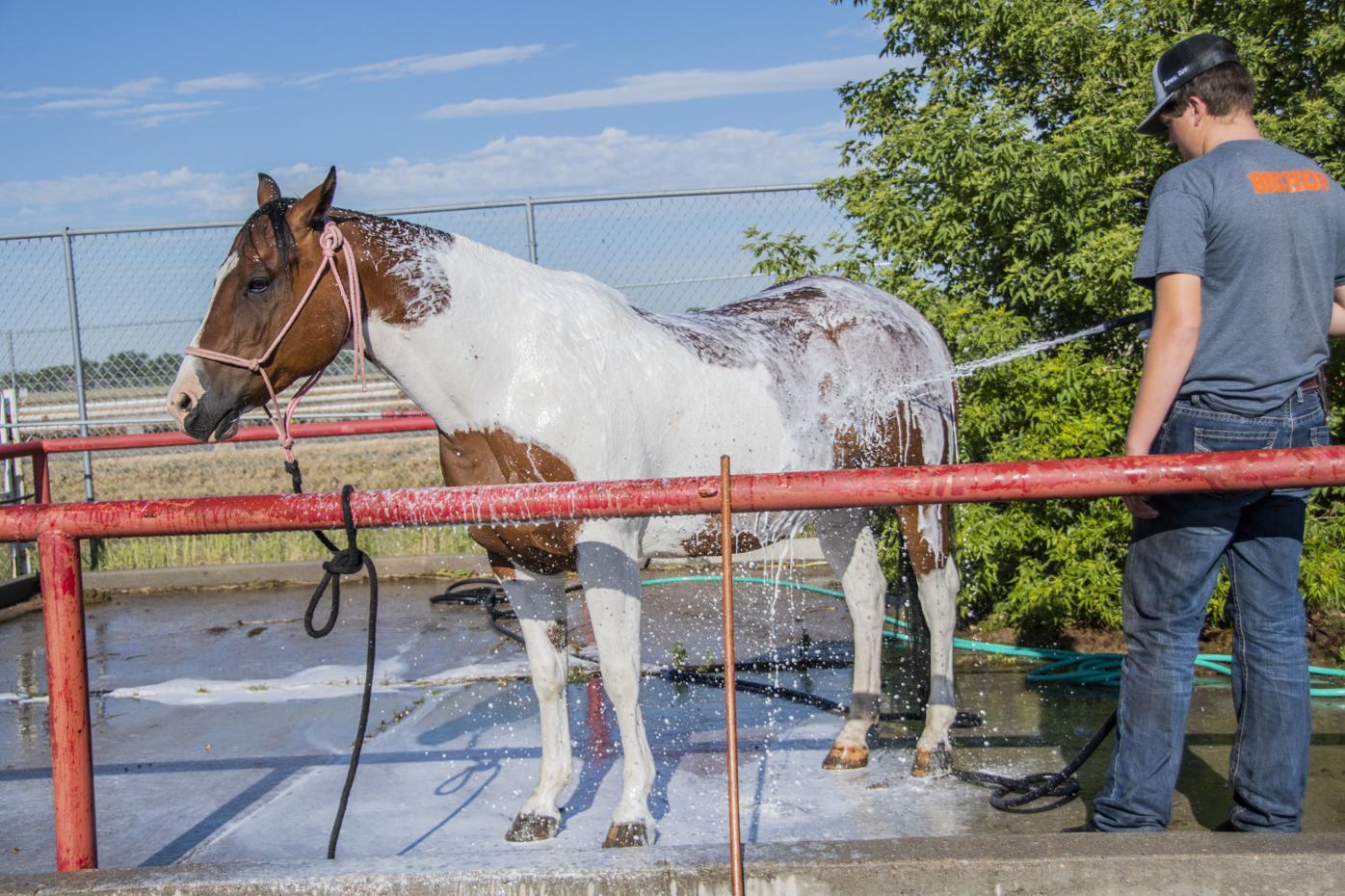 Volunteer Chuck James takes Kiwi to be washed completely with soap and water. Kiwi is used by the Military Committee chairman in the parades and grand entry at the rodeo. Rachel Girt/For the Wyoming Tribune Eagle

“I have the best volunteer job,” James beams as he affectionately rubs Kiwi, who traditionally is ridden by the Cheyenne Frontier Days Military Committee chairman.

James cares for the horses used by the CFD committee chairmen, royalty, color guard and VIPs. He became manager of the historic AA and BB Barns, located on the very western edge of the park, about seven years ago, but has been volunteering for more than 60 years.

“People don’t realize all the care and time that is taken with the horses used in the downtown parades and daily grand entry into the rodeo,” James says.

Parade days typically start at 4:30 a.m. at the white-and-green-trimmed AA Barn. Other days start at 6 a.m. Every morning, volunteers examine each horse to see if they need to be washed or just brushed out.

Most have been rolling in the hay and dirt – especially the paints, says James. At night, the horses are turned loose into outside pens to stretch their legs. He affectionately picks out hay from Kiwi’s mane and points out his mud-splatted white coat.

“We shine them up,” James says with a chuckle. Every mane and tail are combed out before the horses are saddled and put in their stalls. “Right before they are ready to go, we bridle them.”

Then Hannah Jankovsky of Cheyenne and other volunteers ride the horses from the park to the front of the state Capitol, where the parade route starts. She has volunteered in the barn for three years.

“I love the parades,” Jan- kovsky says while holding the bridles of a couple horses. “We get to see our hard work paid off.”

Her sister, Halley Jan- kovsky, also helped with the horses until July, when her Miss Frontier duties took precedence. For the past two years, she has exercised, cleaned and groomed horses prior to the show.

“These horses are quite spoiled, even receiving equine massages,” she adds.

All that work equates to a calmer horse, Halley Jankovsky says. “Having your horse behave is important as a rider, particularly in a parade.”

The volunteer crew takes care of 12 to more than 20 horses, depending upon how many dignitaries are riding. That number doesn’t take into account the hundreds of other horses at Frontier Park used to haul carriages or participating in the rodeo.

Horses are an integral part of the western tradition showcased in Cheyenne every year, James notes. His family homesteaded north of Cheyenne and has cared for horses at CFD for well over a hundred years.

His great uncle even worked for the legendary stock contractor Charles Irwin, James said. Irwin provided horses for CFD before starting his own traveling Wild West Show in 1913. One of those horses was Steamboat, which is featured on all Wyoming license plates.

Taking care of the horses is a job James takes very seriously.

“I give them all a close examination every morning to make that they are all healthy,” James says. “If they need doctoring, then they are immediately taken care of.”

Before the horses arrive in June, the volunteers disinfect every stock tank to kill any bacteria.

The mineral salt tubs have garlic added to help keep the flies away from the horses. James also buys specialty fly spray.

“I don’t scrimp on anything that protects these animals,” James says. “We want them comfortable and sound.”

During the annual July 4 fireworks display, James spends part of the night with the horses, watching and calming them. The nearby fireworks help acclimate the horses to strange sounds, but, James says, “I want to make sure they’re OK.”

The horses come from around the country, chosen for their temperament and ability to handle crowds and noises.

“You cannot put just any ranch horses out here, because they couldn’t mentally handle the loud noises and cannons,” James adds.

James even brings several of his own horses, including Kiwi. “Kiwi is what we call bombproof. One year after a storm, a tree branch fell in front of him. He didn’t even startle.”

Beyond caring for the horses, James matches the horses to the experience level of the rider. Starting in June, his team works with the chairmen, training them how to handle the horses in different situations. Some bring years of experience; others are novice riders.

James places as much thought into every selection as he does for the overall care of the horses.

“If the horse doesn’t work, we switch it out with another one,” he says.

The volunteers who help in the AA Barn come from many different committees.

James, who is an engineer, is actually on the Grounds Committee. He started in the AA Barn mucking out stalls as a kid.

“I have been happy in every volunteer task that I have. I would be just as happy mucking out stalls as managing the barn,” he says.

Beyond managing the AA and BB barns, James unloads the 170 tons of hay used on the park, assigns stock contractors camping spots and works in the arena during rodeos.

“I do a little of a lot of stuff,” he says with a shrug. “Believe me, there are a lot of volunteers on the park who help out several committees. We work together to get the job done.”