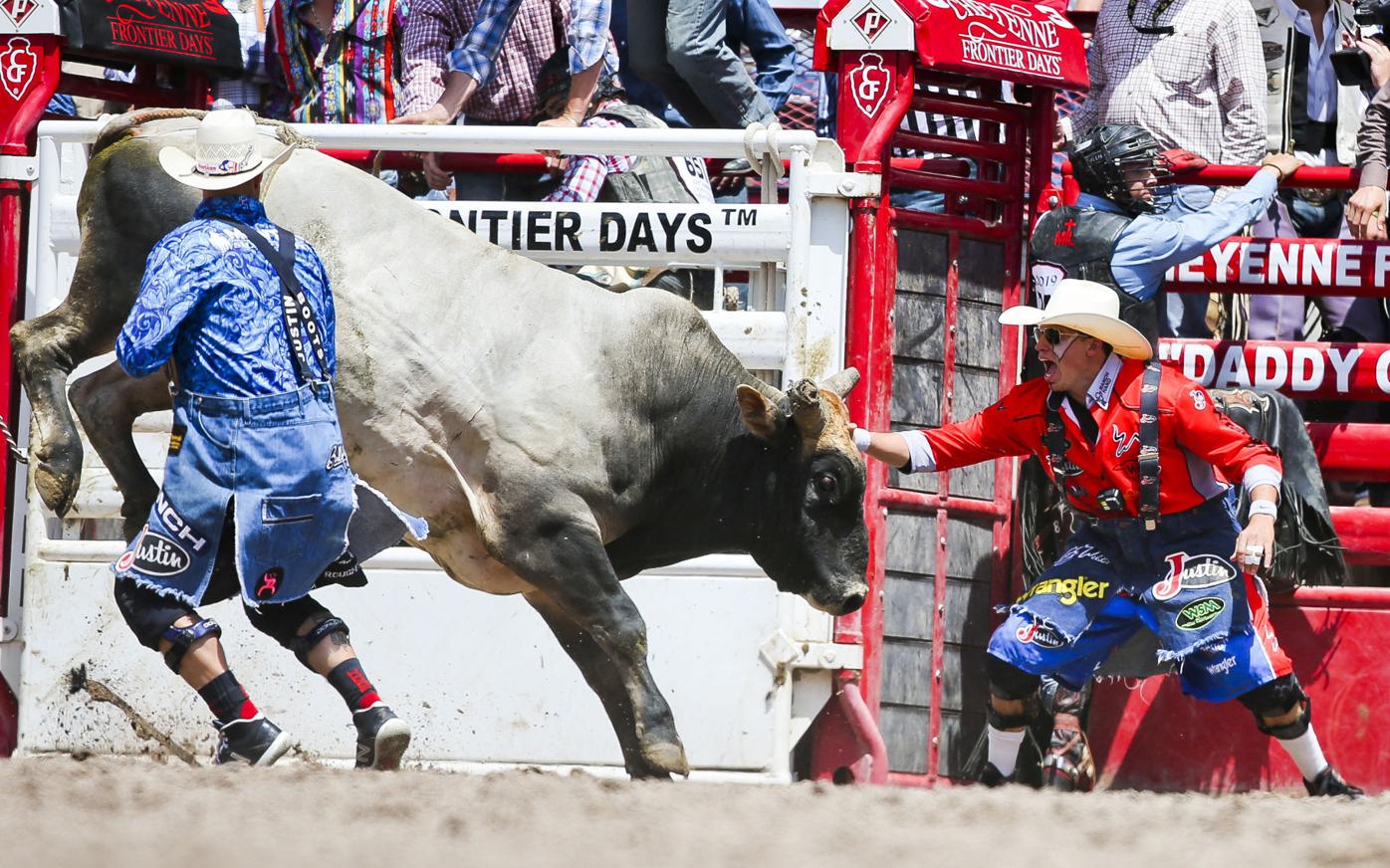 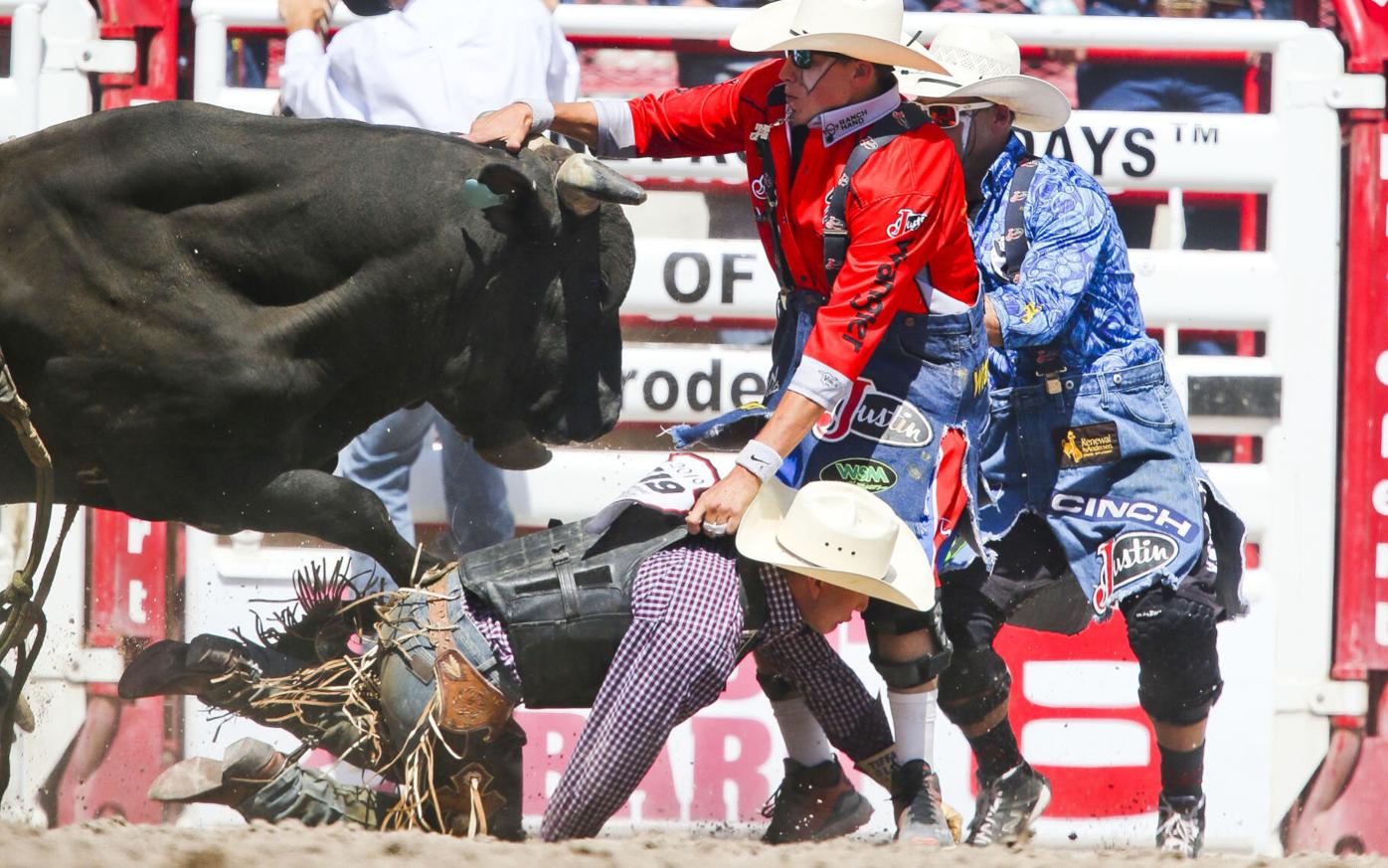 Bullfighters Cody Webster and Dusty Tuckness haul Joseph McConnel out of the way of Bet on Black after he is thrown in the rodeo at Cheyenne Frontier Days Tuesday, July 23, 2019, at Frontier Park Arena. Nadav Soroker/Wyoming Tribune Eagle 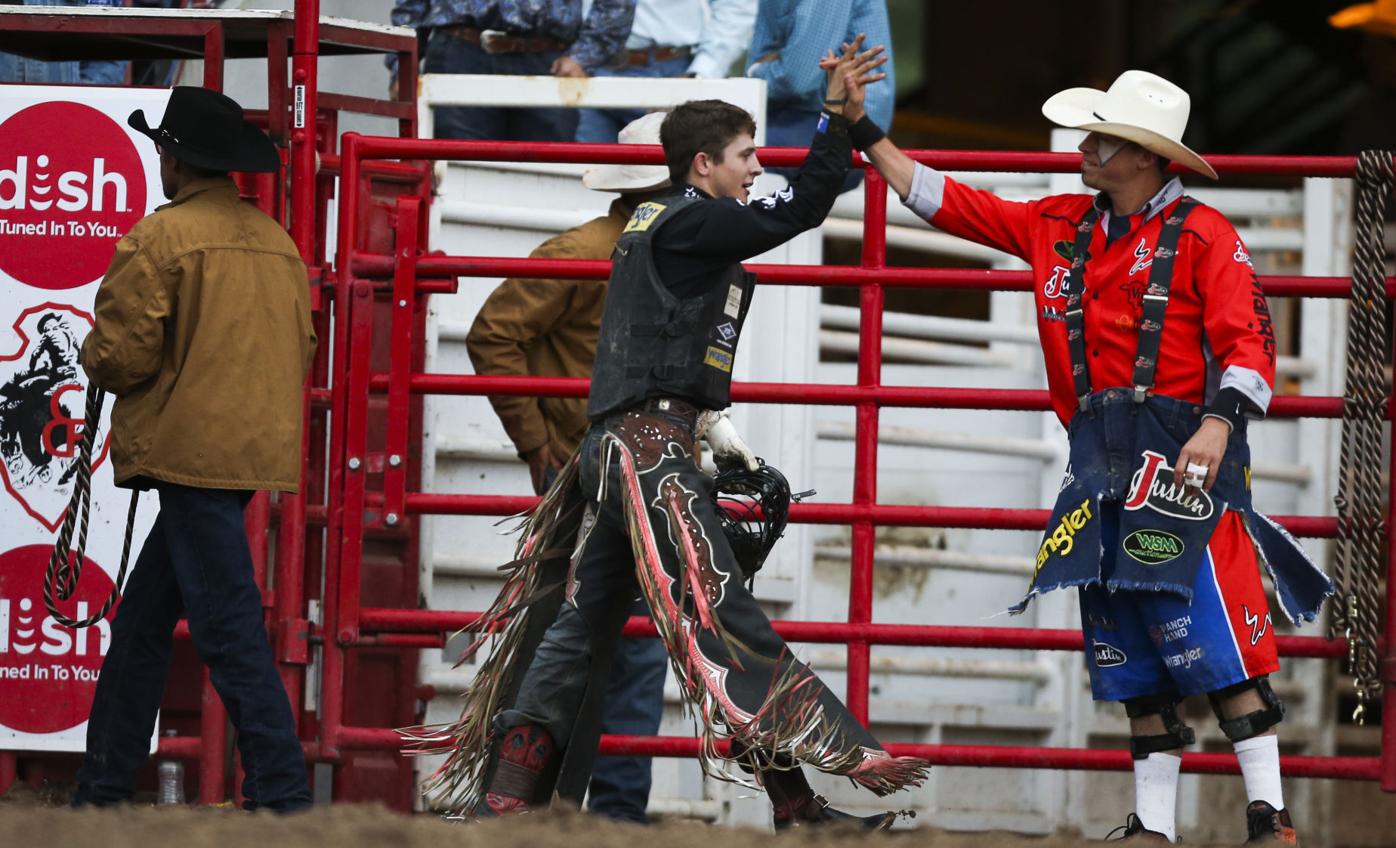 Bullfighters Cody Webster and Dusty Tuckness haul Joseph McConnel out of the way of Bet on Black after he is thrown in the rodeo at Cheyenne Frontier Days Tuesday, July 23, 2019, at Frontier Park Arena. Nadav Soroker/Wyoming Tribune Eagle

A broken back, broken legs and a completely reconstructed ankle are all expected dangers when you’ve been bullfighting for nearly 20 years. But for 29-year-old Cody Webster, it’s all part of what he signed up for.

What did he sign up for, exactly? As he likes to say, he’s the Secret Service for cowboys.

A rodeo bullfighter doesn’t get the majority of the headlines at a given event, but his job is among the most important in the arena. He is the first line of defense for a cowboy should he fall off his bull. If said bull begins to charge at a cowboy, it is Webster’s job to distract the bull and oftentimes take the brunt of the attacks to ensure the cowboy's safety.

Webster, an Oklahoma native and reigning PRCA Bullfighter of the Year, says he has never once wavered from what he said was his childhood dream job. Injuries are bound to happen. The thrill of knowing he is a personal bodyguard against an animal that weighs upwards of 1,500 pounds is a rush.

Quite literally running headfirst into danger is not for the faint of heart. But if you’ve got the guts, it’s the gig of a lifetime.

“Normally, people run away … I don’t know, man. I get asked (why I do this) all the time,” Webster said. “I remember just being a little tiny baby, and my mom could always tell I had my eyes (on the fighters).”

Bullfighting isn’t just about being a thrill-seeker; it requires a ton of training, and not just learning to take hits from bulls. Webster said he works on his feet, in addition to regular weight training, to keep his fitness up.

In the way a football player needs “quick twitch” muscles to fire so he can make moves on a moment’s notice, Webster trains in a similar manner. Yes, that includes things like footwork drills.

“(We’re) literally running and jumping on the animal’s head,” Webster said. “If you’re thinking in the arena, you’re late.”

Dusty Tuckness, a native of the Cody, Wyoming area and 10-time winner of the PRCA’s Bullfighter of the Year award, has been bullfighting since he was 11. He grew up in a rodeo household, as his father also fought bulls.

Tuckness went relatively unscathed the first few years of his bullfighting life, but had a moment at age 15 that made him think twice.

He doesn’t remember exactly what happened; all he remembers is waking up in an ambulance after a bull knocked him out at a rodeo. The physical aftermath was bad: several broken ribs and a split chin. But more than that, the wreck took a mental toll; Tuckness finally realized how dangerous his line of work could be.

For a brief period of time, Tuckness said he was overthinking things in the ring. There was indecision and fear.

“It opened my eyes,” Tuckness said. “It kind of hesitated me … The mental game is such a big aspect.

With help from a newfound dedication to his faith, Tuckness, now 35, once again found his stride. And, two decades after the accident that made him rethink life, he is as passionate as ever about what he does.

What keeps bullfighters like Webster and Tuckness going? The money is, of course, a plus. While neither Tuckness nor Webster chose to disclose financial specifics behind their professions, Tuckness said he is “very blessed on the financial side of it.”

More than any amount of money, however, is the feeling a bullfighter gets when he is able to do his job. Each and every time a cowboy gets in the ring, he entrusts his safety to Tuckness and Webster, who will both be working the Cheyenne Frontier Days Rodeo this year.

Even if the cowboy has no previous relationship with his designated protector, the fighter is willing to put himself on the line to ensure the cowboy makes it out of the ring safely.

No amount of cash can replicate that feeling, Tuckness said.

“I don’t do it for the spotlight,” Tuckness said. “It doesn’t matter who it is. I sign up to protect everyone that is there.”