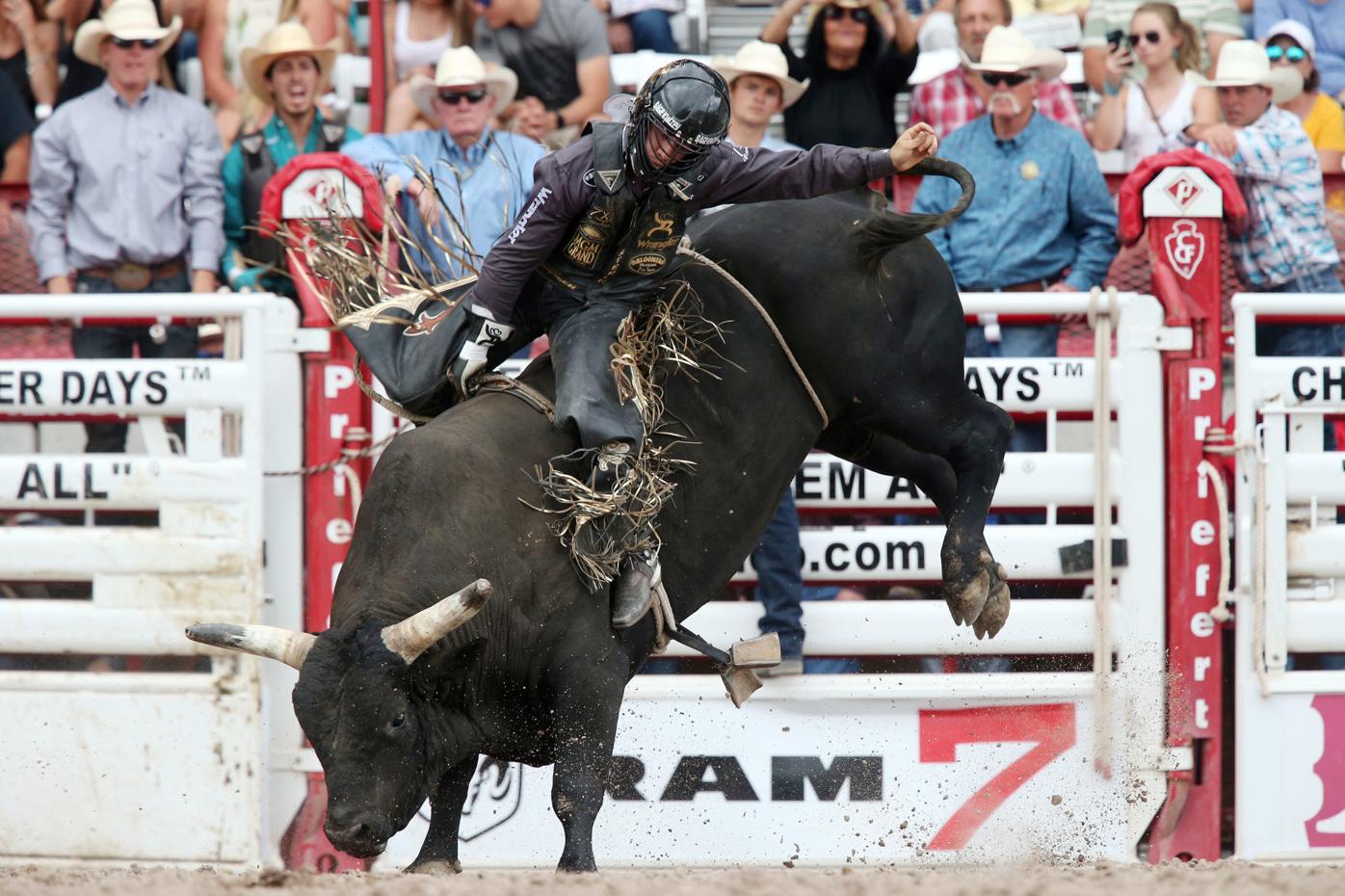 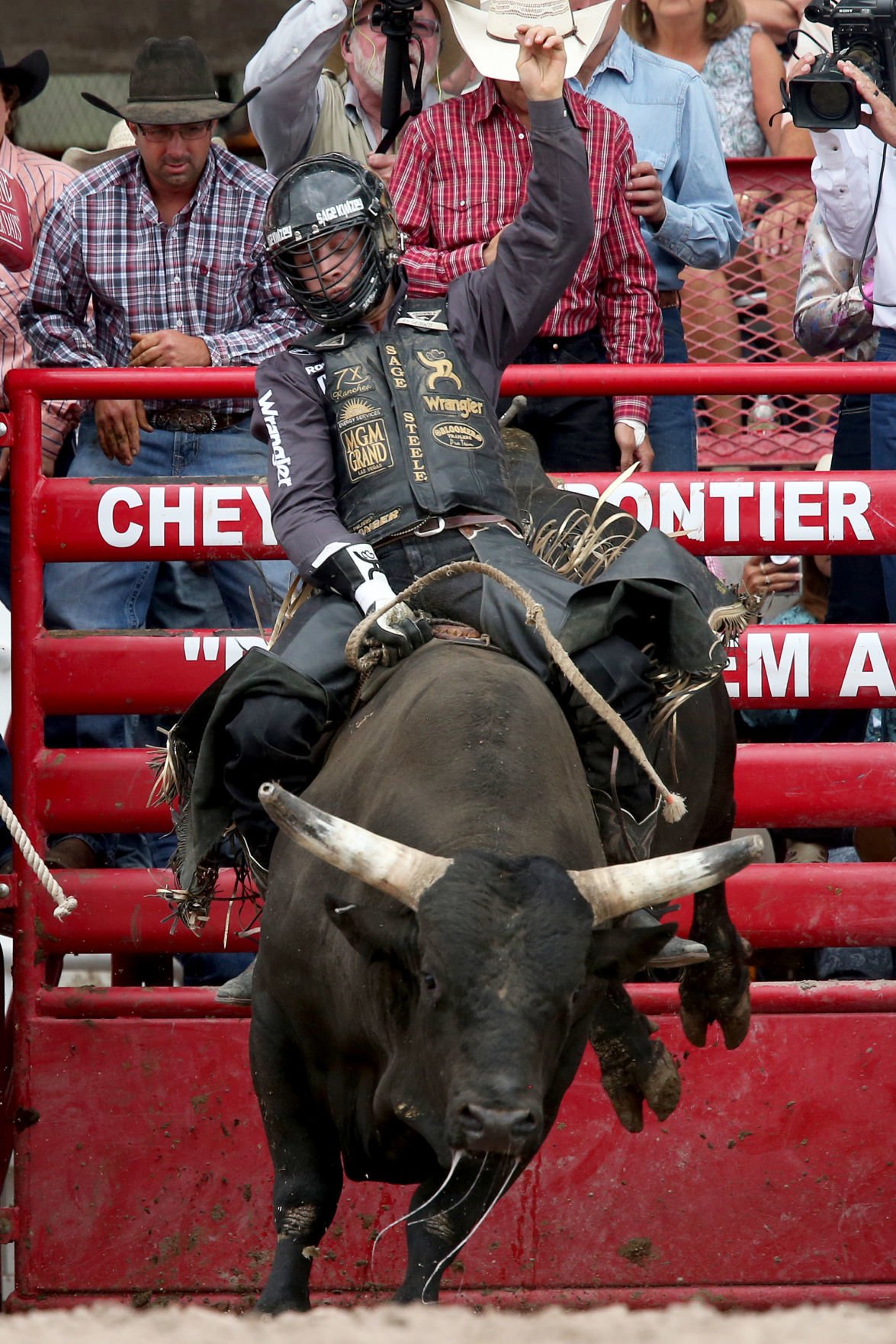 CHEYENNE – Almost half a lifetime ago, it looked like Sage Kimzey was destined to be anything other than a bull rider.

He was young for his grade, undersized and regularly injured. Kimzey had shown a great deal of natural talent by the time he hit middle school, but it wasn’t clear whether it would be enough to overcome the aforementioned negatives.

The Strong City, Oklahoma, resident wasn’t willing to wait around to find out.

His neighbor, Clay Taylor, owned a group of young bulls he let Kimzey practice on.

“They were probably over my skill level at the time, but they gave me a good test,” Kimzey said. “(Taylor) also took care of me as far as not putting me on anything that was going to hurt me real bad.

“I think I only got hurt once out there, and I probably got on 50 or 60 per year out at his place for two or three years.

“I had to go about bull riding in a more technical way than a lot of kids. Jumping on and trying hard didn’t work for me. I always gave effort, but I had to figure out something better.”

Kimzey, 24, used all those repetitions to master the mechanics of bull riding. Polishing his natural ability earned him a scholarship to Southwestern Oklahoma State University in Weatherford, Oklahoma.

He has since claimed the past five Professional Rodeo Cowboys Association world championships.

“Talent only takes you so far,” Kimzey said. “A lot of guys have natural talent, but they don’t go the extra mile. I don’t know if they don’t want to do it, or don’t know any better. They just don’t do it.

“To be at the top of anything – whether it’s underwater basket weaving or bull riding – you know that person is struggling, and they’re giving their all every day of their life.

His approach to bull riding hasn’t changed since he was a teen. Kimzey continues to work harder – and smarter – than the vast majority of cowboys going down the road.

Kimzey studies websites that post stats for bulls. They not only show the marks the bull got, they also display when the bulls last left the chutes. Kimzey uses the latter information to determine which performances those bulls may buck in at rodeos where he is entered.

He can’t always control when he goes, but he makes sure his preference is known.

“All of the contractors have patterns of what they like to do, how they set their pens and what bulls are going to be out what day,” Kimzey said. “You can go back through and look up rodeos, or just pay attention throughout the year and figure out some tendencies and guess what perfs certain bulls might be out.”

It’s no accident that Kimzey’s approach seems like analytics applied to rodeo.

“Sports are all about numbers anymore,” he said. “You have to be smart in your approach. You also have to know what your shortcomings are if you want to get better as an athlete.”

“That’s something I’ve gotten really good at. I’ll find something I’m not so good at and try to perfect it.”

One of those weaknesses has been bulls that spin fast and flat and leave the gate to the left.

“They have been my kryptonite since I was a rookie,” he said. “That’s what I’ve worked on, and my percentage on that sort of bulls has been going up.”

Kimzey won his first world title in just his second season as a pro. He successfully rode nearly 58% of the bulls he climbed on top of that season. Kimzey was north of 58% each year from 2015 through 2018. He has scored on 50% of his bulls this season.

Kimzey’s work ethic is well known among his peers.

“The simple fact is he wants it more than everyone else,” four-time world champion J.W. Harris said. “He really works at it, and is a perfectionist. Those are the things that separate him from everyone else.

“You have to have a little bit of luck, of course. What he is doing takes a special talent, and that’s exactly what he is. Guys like him come along once every 30 or 40 years. He is a rare talent.”

Kimzey’s success hasn’t come merely from studying contractor patterns or spending hours in the practice pen. He has tried to be a sponge for any bit of information that can help him.

“One thing that’s really cool about rodeo is that there are no secrets,” he said. “Everybody – even the legends – share what they know. Getting around the guys who know a lot more about it than I do and picking their brain has truly helped.”

Being a student of the sport shortened his learning curve, Kimzey added.

“It’s not that you can’t figure it out on your own, but it’s a lot easier to absorb the knowledge that’s out there from someone who has already been through it,” he said. “It sure beats beating your head against the wall trying to figure out the same things they did.”

Kimzey’s efforts have yielded more than world titles. He is the youngest cowboy to break the $2 million mark in career earnings.

Kimzey works hard to be the best in his business, but he isn’t close to burning out.

“I know it’s super cliché, but this is a dream come true to be out here riding bulls and making a good living,” he said. “This is all I ever wanted to do. There aren’t too many people who get to wake up every day and do exactly what they want to do. I’m pretty fortunate on that side of things.”