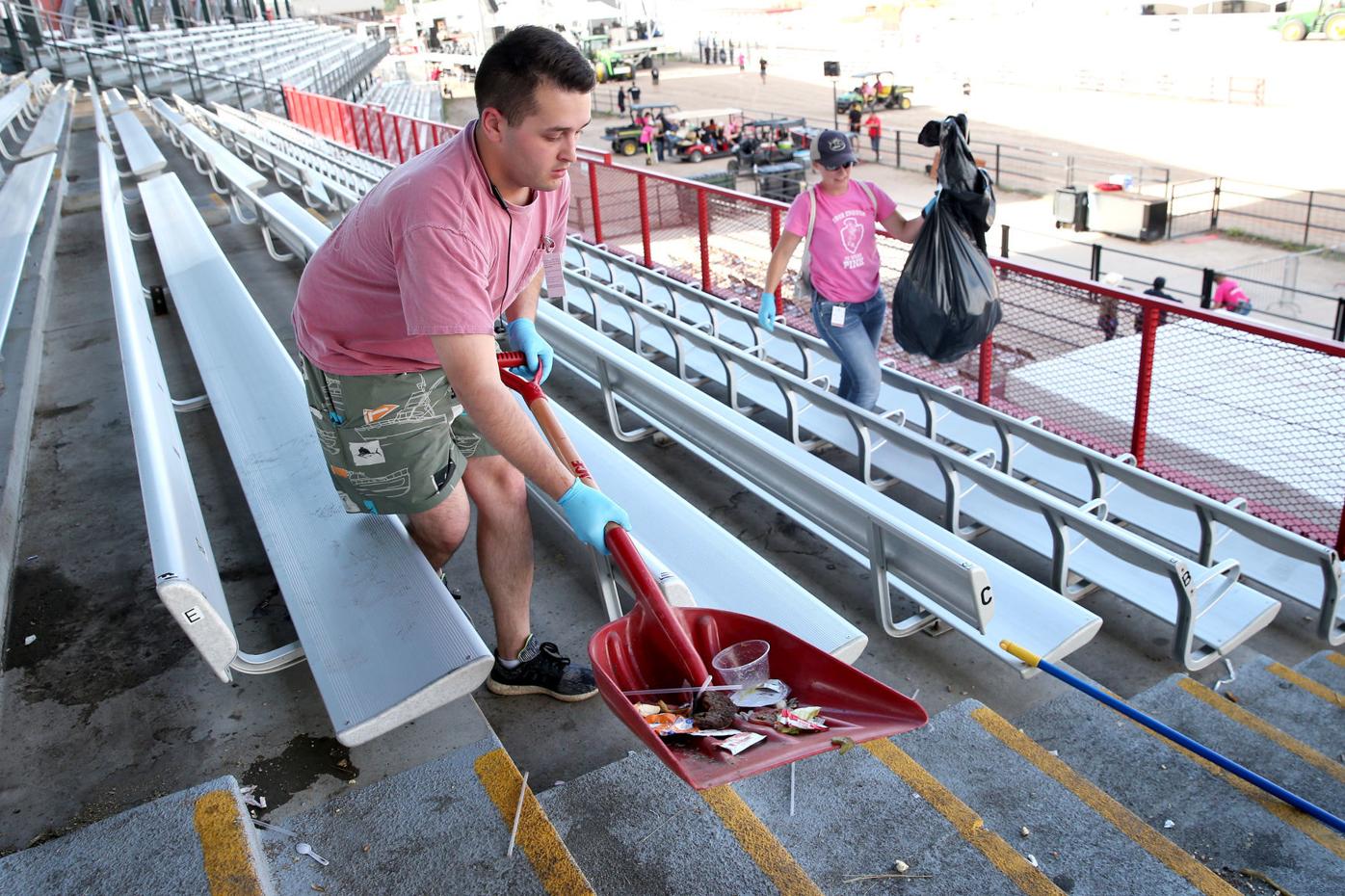 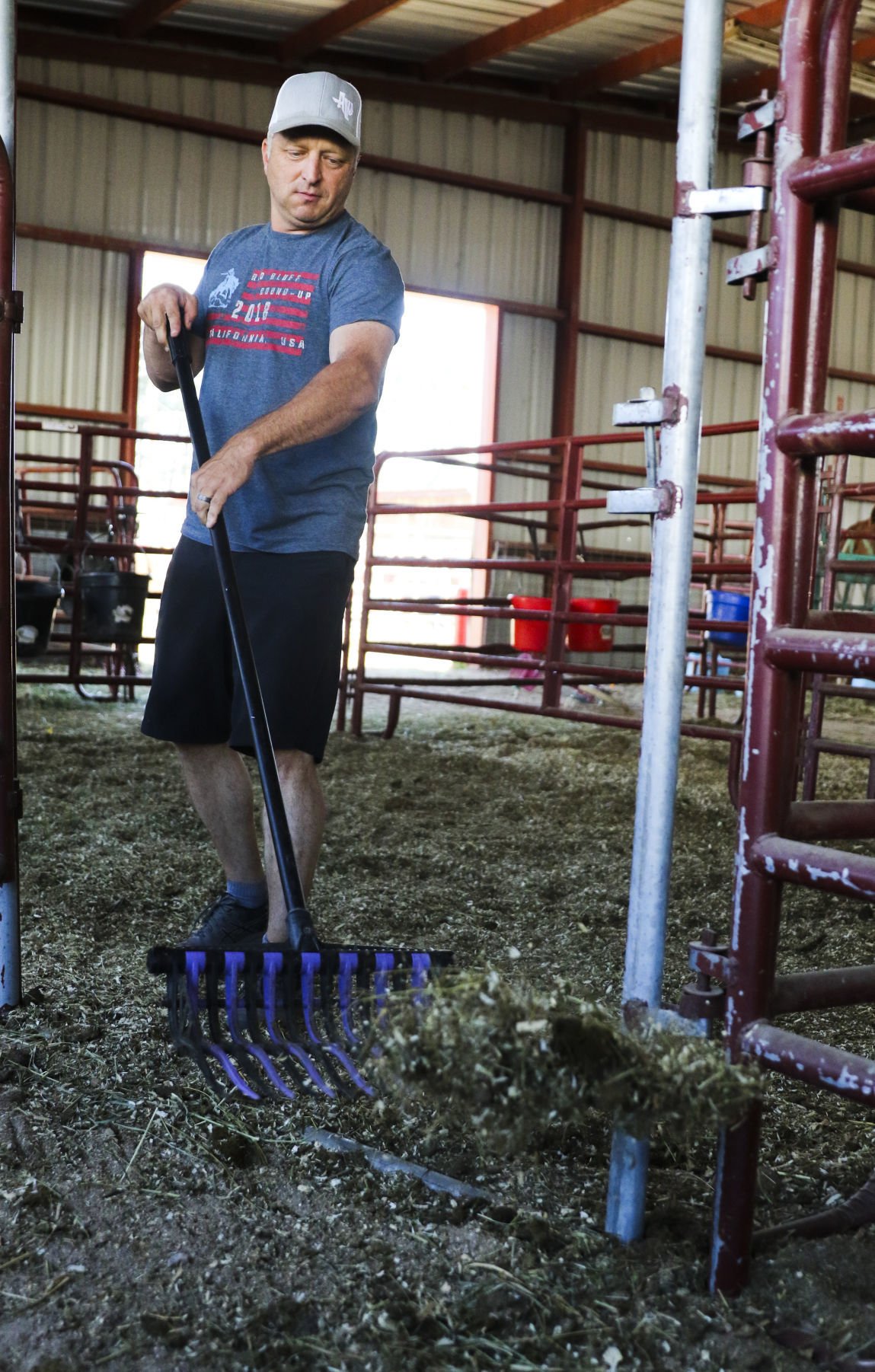 James Miller, husband of defending barrel racing champion Nellie Miller, cleans out a stall in the back barns Friday, July 26, 2019, at Frontier Park. Miller cleans out the stalls twice a day to make sure the horses are comfortable, safe and have space. Nadav Soroker/Wyoming Tribune Eagle

James Miller, husband of defending barrel racing champion Nellie Miller, cleans out a stall in the back barns Friday, July 26, 2019, at Frontier Park. Miller cleans out the stalls twice a day to make sure the horses are comfortable, safe and have space. Nadav Soroker/Wyoming Tribune Eagle

CHEYENNE – The rodeo is some dirty business. And it takes a crew of hundreds to keep it from getting trashy, as well.

Cheyenne Frontier Days brings thousands of people through the gates at Frontier Park to watch the “Daddy of ’em all.” And all of those people produce a prodigious amount of garbage.

“It’s a lot of work to keep the grounds clean,” said CFD Grounds Committee Chairman Jerry Moberly. “It’s a full-time job, for sure.”

There are literally tons of soda cans, beer bottles, food wrappers and peanut shells that need to be cleaned up and moved out of Frontier Park every day.

Dennis Pino, the City of Cheyenne’s director of sanitation, said his crew removes about 10 tons of trash and recycling in any given day from Frontier Park. That’s at least two rear-loading dump trucks full of refuse.

All that garbage doesn’t include what’s being produced outside of Frontier Park. Cheyenne’s population balloons with CFD visitors, and all of those people crowding the city’s bars, restaurants and hotels means a heck of a lot more garbage being produced every day.

“We pull in about, on average in July, 4,000 tons,” Pino said. “If you look at June, for example, our numbers drop to 3,500 tons. That’s about an additional 500 tons more trash during the month of July, and it’s from those 10 days. It’s coming from the hotels, the restaurants, bars and of course, all the waste from Cheyenne Frontier Days in the park.”

Along with all the trash and recyclable materials being produced by the human rodeo-goers, the animal stars of the show produce a pretty hefty amount of waste all on their own. Pino said during 2018’s CFD, the city sent 550 tons of animal waste and used bedding to the city’s Compost Facility.

Pino said while there’s significantly more waste to move, the city’s Sanitation Department is able to deal with it all without bringing in temporary workers. But all that trash means while the rest of city government shuts down for Cheyenne Day at CFD, the sanitation crews are on the clock.

Moberly said throughout the day, CFD has a crew of six people constantly rotating through the park, unloading trash and recycling cans. In addition, about 150 volunteers from various local groups, like the Boy Scouts and booster clubs from F.E. Warren Air Force Base, clean the stands and other areas of Frontier Park.

“We start about 6 in the morning, and then we go throughout the day and into the night, depending on what’s going on,” Moberly said. “We start cleaning up from the rodeo once it ends. And if there’s a night show, then they have to clean the stands and the grounds, and that will go to 2 or 3 in the morning.”

Rick Bell, a lead on the CFD Grounds Committee, said he and his fellow volunteers start working on the logistics of the event months in advance.

“There’s a lot for work that goes in before the rodeo even starts,” Bell said.

Moberly said CFD has contracts with those nonprofit groups, which pays out a total of $10,000 for the cleaning services. And for those groups, those contracts with CFD can make up the bulk of their budget for the year.

Air Force Tech Sgt. Anthony Perez is a member of the 90th Maintenance Wing and the president of the 90th Cavalry Volunteers Booster Club, one of the groups contracted by CFD for cleaning the stands. He said the money that group is paid for its work during CFD funds the vast majority of their activities, including barbecues, Christmas parties and farewell packages.

In true military fashion, Perez said he and his fellow volunteers have a precise system they’ve developed through the years to ensure the cleaning is done with the utmost efficiency. Someone’s on trash bags, someone’s picking up trash by hand, someone’s sweeping, someone is using a snow shovel to scoop all the trash on the ground up, and someone is constantly rotating the bags out to the dumpster.

“After Cheyenne Day, it took us more than an hour and a half to finish cleaning up (one side) of the stands,” Perez said. “I’m not putting ourselves above anyone, but if they knew military members were picking up their trash that they just leave, maybe there wouldn’t be as much left.”

Cleaning up after a night show can be a challenge, Bell said. Since the horses will be using the arena the very next day, every piece of trash that might interfere with the rodeo needs to be out of there.

“All that trash comes back up, and we have to go down as the Grounds Committee and clean that up and make sure it’s ready for the show,” Bell said.

A clean pen is a happy pen

Keeping the equine and bovine stars of the show happy requires a lot of shoveling every day.

Each morning, rodeo participants are cleaning out all the waste the horses and cattle produce throughout the night. It’s key to not only making sure the animals are happy, but also keeping them healthy, said James Miller, husband of CFD’s defending barrel racing champion, Nellie Miller.

“We try to stay after it pretty daily. We want to try and clean it once or twice a day, because there’s so many horses in here,” James Miller said. “The ammonia smell in here gets pretty strong, and you want to make sure the horses can really relax and lay down, and that they’re clean.”

Miller said along with the regular shoveling, he replaces the shavings about every two days. It’s key in making sure flies don’t become a problem, and any illness one horse might have doesn’t infect the other horses.

“We probably go through about 12 bags (of bedding) for two horses,” Miller said. “It’s really important. Because these animals are coming from so many different areas. And there’s probably some sick horses in here, and you don’t want your horse to get sick because it puts you backwards.

“We want to make sure everything’s clean and good and healthy for them.”

Ramsey Scott is the Wyoming Tribune Eagle’s state government reporter. He can be reached at 307-633-3124 or rscott@wyomingnews.com. Follow him on Twitter at @RamseyWyoming.

Ramsey Scott is the Wyoming Tribune Eagle’s state government reporter. He can be reached at 307-633-3124 or rscott@wyomingnews.com. Follow him on Twitter at @RamseyWyoming.