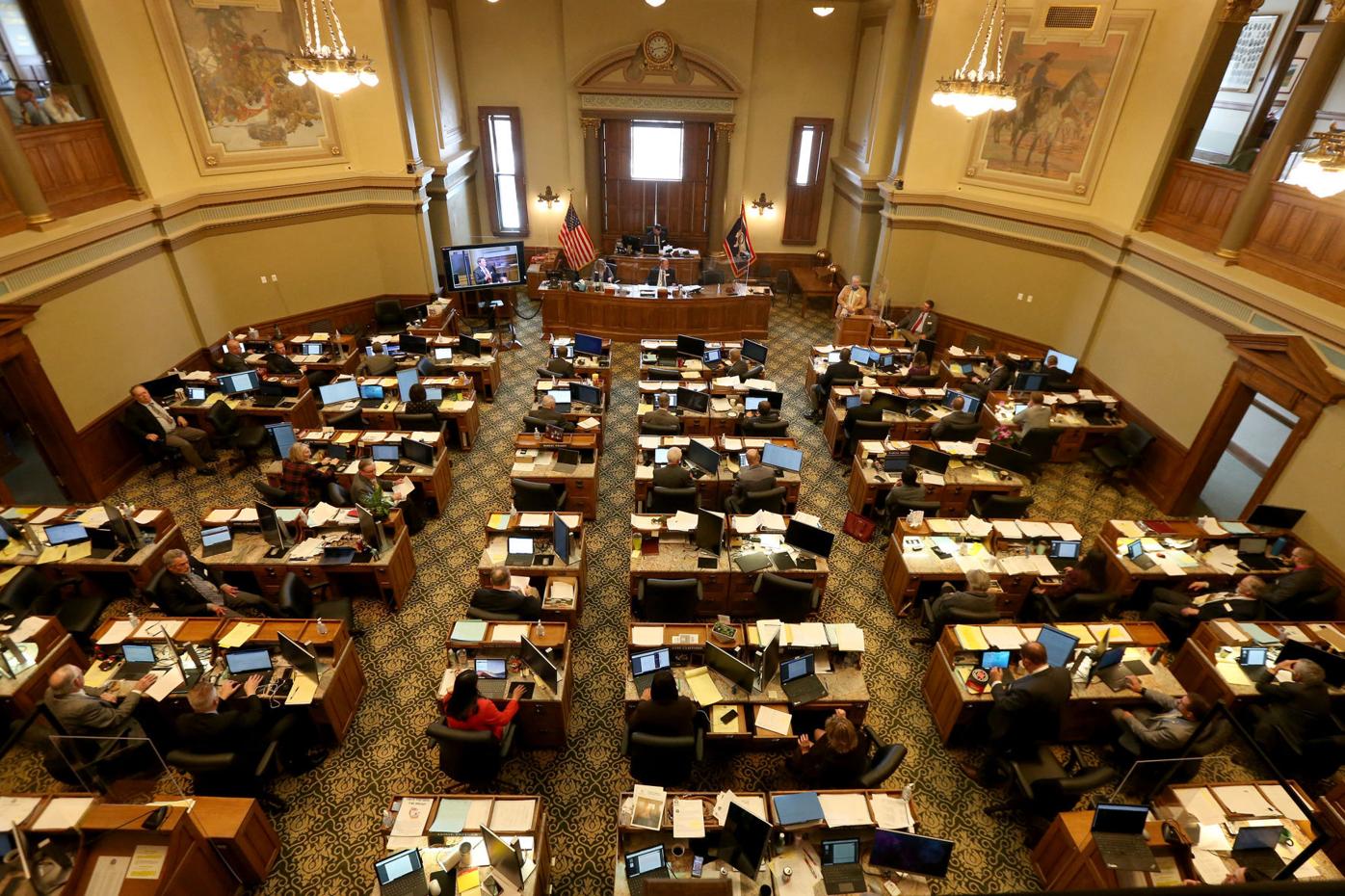 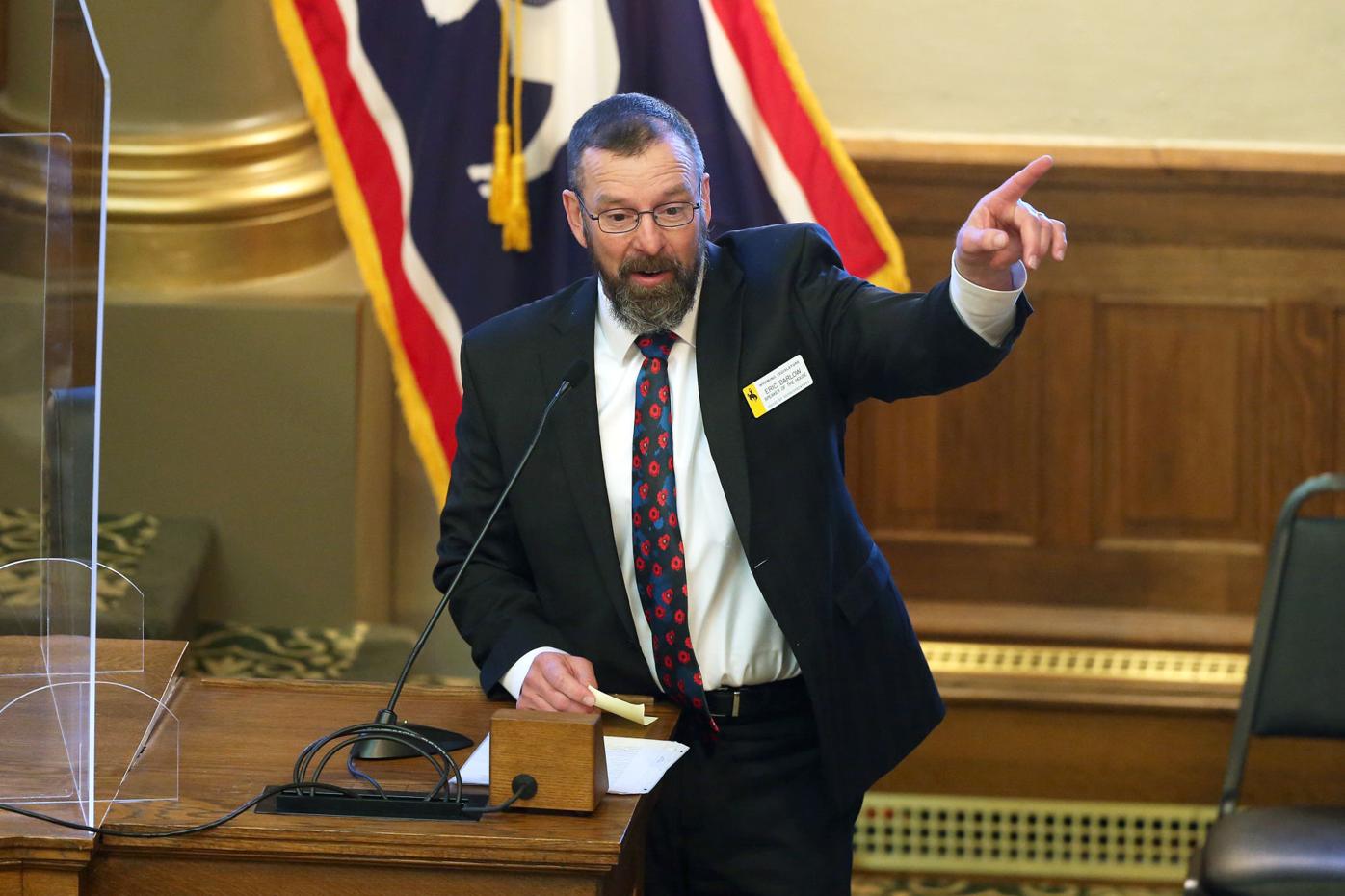 Speaker Eric Barlow, R-Gillette, gives a speech during the first day of the 66th Wyoming Legislature’s general session Monday, March 1, 2021, inside the state Capitol. Ambitions by conservatives on the campaign trail last year to rein in the powers of public health officers fizzled this session, with only Barlow’s House Bill 127 – Public health amendments and Rep. Hans Hunt’s House Bill 109 – Local health officers-education requirements, passing both chambers out of the more than half-dozen bills concerning the topic this session.

Speaker Eric Barlow, R-Gillette, gives a speech during the first day of the 66th Wyoming Legislature’s general session Monday, March 1, 2021, inside the state Capitol. Ambitions by conservatives on the campaign trail last year to rein in the powers of public health officers fizzled this session, with only Barlow’s House Bill 127 – Public health amendments and Rep. Hans Hunt’s House Bill 109 – Local health officers-education requirements, passing both chambers out of the more than half-dozen bills concerning the topic this session.

CHEYENNE — Early in the 2021 Legislative Session, Wyoming seemed positioned for a pivotal year in its state history.

Under the 66th Wyoming Legislature, proposed cuts to government to the tune of hundreds of millions of dollars were expected to deepen. K-12 education was set to see sharp reductions in funding levels in response to a downturn in the state’s energy sector. Major shifts in abortion and firearms policies were proposed, with numerous bills impacting each with little resistance in the early days.

Entering the final days of session, however, Wyoming is no longer poised to experience any of these drastic changes. Of the seven abortion-related bills considered this session, just one – Senate File 34 – Born alive infant-means of care – passed both the House and Senate. Gov. Mark Gordon vetoed the bill in 2020.

Ambitions by conservatives on the campaign trail last year to rein in the powers of public health officers fizzled this session, with only House Speaker Eric Barlow’s House Bill 127 – Public health amendments and Rep. Hans Hunt’s House Bill 109 – Local health officers-education requirements, passing both chambers out of the more than half-dozen bills concerning the topic this session.

The session’s premiere gun bill, Senate File 81 – Second Amendment Preservation Act, never received a hearing in the House of Representatives after a controversial run through the Senate, while just two gun bills — one to prevent banks from discriminating against firearms manufacturers (House Bill 236 – Firearms transactions-financial discrimination), and another to prevent state officials from closing firearms facilities during emergencies (Senate File 155 – Limiting firearm seizure and regulation during emergencies) — managed to pass out of both chambers of the Legislature. Both now await the governor’s signature.

Gov. Gordon signed a supplemental budget bill largely unchanged from the one he proposed to the Legislature back in November. Entering this week, meanwhile, the House and Senate are closely aligned on an education funding bill, with few significant cuts and the major division being the elimination of a conditional, half-cent sales tax from the Senate version of the bill.

Lawmakers did pass some major legislation — including a bill to create a fund to sue states seeking to close coal-fired power plants, significant changes to the state’s charter school statutes and numerous pieces of legislation from the Joint Committee on Agriculture to support the state’s meat processing industry. But all told, the total number of bills to make it through the process was small compared to the body’s ambitions at the start of session.

Of the 441 total bills considered by lawmakers this year, only about a third of them, 149, advanced through both chambers as of Monday, with several others either waiting for concurrence or a signature from legislative leadership.

While Medicaid expansion failed to pass in the Wyoming Senate last week after narrow passage in the House of Representatives, expansion advocates walked away with one minor success. The Joint Committee on Labor, Health and Social Services expressed interest in pursuing it as an interim topic.

Sweetened by new federal incentives, the prospect of expanding Medicaid gained a number of new allies in the House of Representatives this session. Those included Rep. Steve Harshman, R-Casper, who had previously voted against expansion nearly every time it had come before him.

However, outside pressure — as well as Senate leadership’s own reluctance to pursue expansion — led to its defeat twice in the Senate without ever reaching the floor for debate.

The Management Council still needs to approve the list of interim topics before the committee formally pursues expansion in the interim.

Earlier in the session, the Wyoming Senate defeated a piece of House-backed legislation to repeal the state’s death penalty, effectively ending the discussion for another year.

Or so they thought. During third reading debate in the House last week, freshman Rep. John Romero-Martinez (R-Cheyenne) introduced an amendment to Senate File 96 – Homicide amendments. The amendment would have removed the death penalty from statute in a last-second attempt to bypass the Senate.

Speaker of the House Eric Barlow (R-Gillette) ruled the amendment was not germane to the bill and was, therefore, not admissible. However, in debate on the bill, advocates for the amendment argued that since SF-96 would amend the homicide statutes and the death penalty was only acceptable as a punishment for homicide under Wyoming statutes, it was well within reason to expand the scope of the bill as long as it continued to address homicide.

Others, like House Majority Floor Leader Albert Sommers (R-Pinedale), said the amendment greatly altered the original intention of the bill in violation of the Wyoming Constitution, a point echoed by several members.

Ultimately, Romero-Martinez’s amendment to the bill failed by a vote of 20-39.

Scott himself had previously argued that a sales tax would not pass the Senate, but noted that revenue bills must begin in the House. If the House wanted the Senate to debate a tax bill, he said, the House should have advanced one for them to discuss. But it didn’t: numerous tax bills (including two sponsored by the House Revenue Committee) failed to pass this session. Some, like a tax on unearned income targeted at the very rich, did not even make it to the floor for debate.

“That’s their job,” Scott said on the floor. His amendment was an effort to create that debate, he said.

The debate that ensued, however, did not focus on the merits of including the tax, but why many of the members were voting against it.

Sen. Tim Salazar, R-Riverton, said he promised his constituents not to raise taxes and would vote no. Sen. John Kolb, R-Rock Springs, said introducing a tax would do the people of the state an “injustice” when lawmakers hadn’t done enough work to find further efficiencies in the state’s education budget.

That sentiment was argued by Senate Appropriations Committee Chairman Larry Hicks, R-Baggs, who said more money toward education does not equal better performance, and that the current rate of spending is outpacing what the state can actually afford.

“Just throwing money at K-12 does not improve the results,” he said.

Others, like Sen. Chris Rothfuss, D-Laramie, argued the debate itself was a “disingenuous” attempt by the Senate to generate new revenue.

The amendment failed by a vote of 25-5. Scott — who brought the amendment — voted against it.