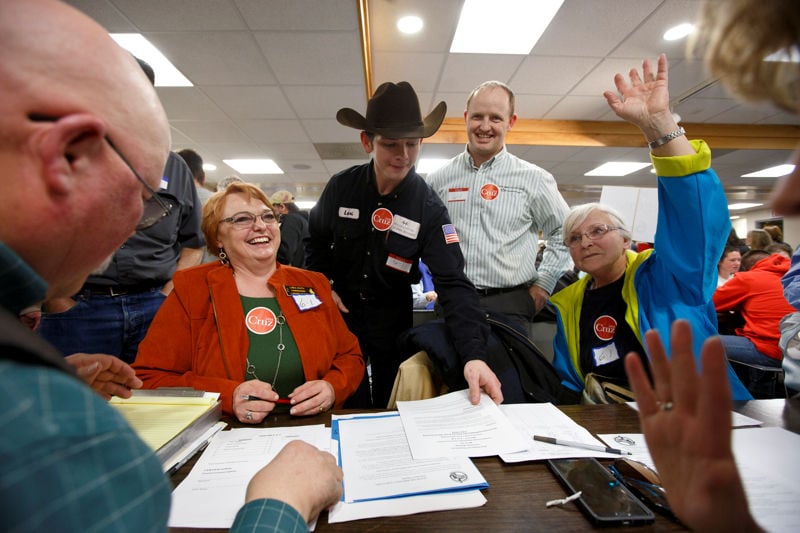 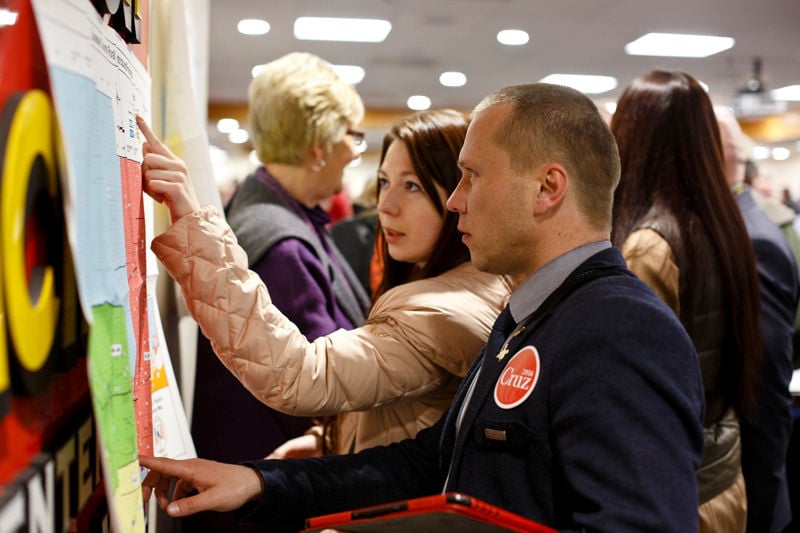 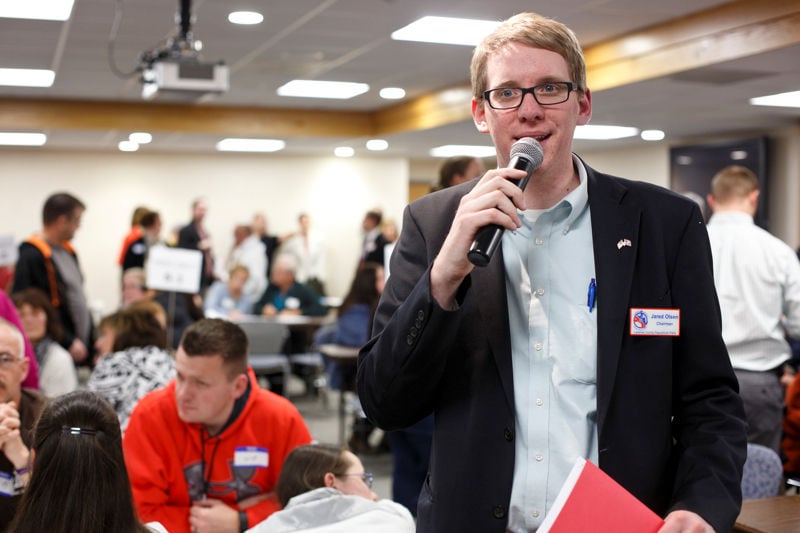 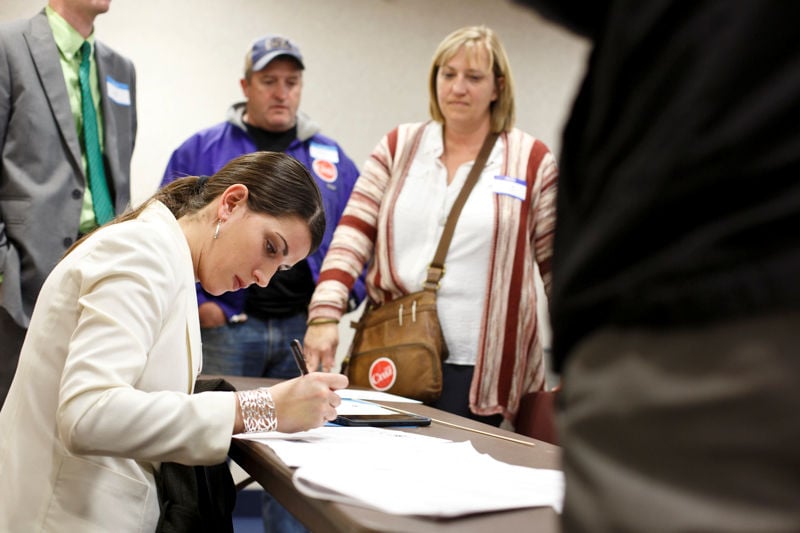 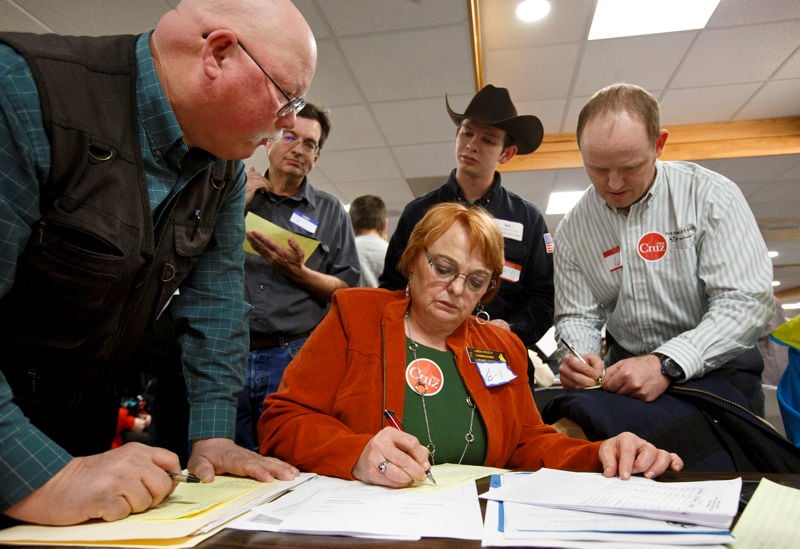 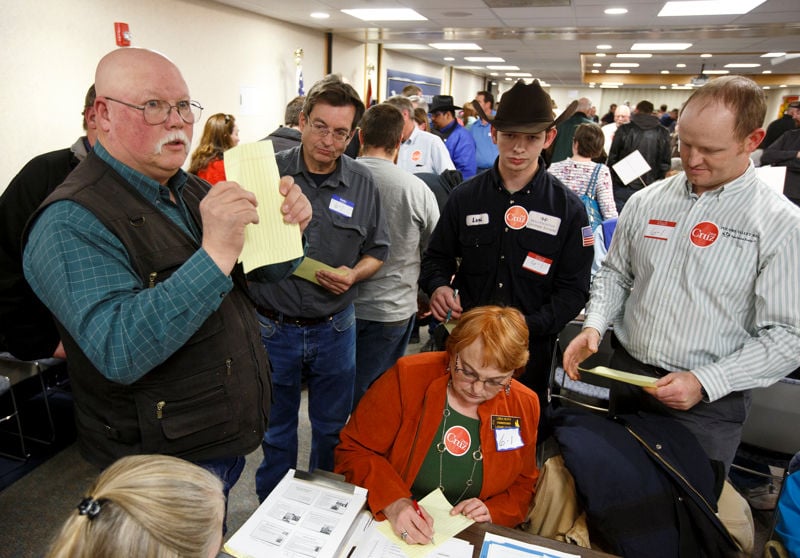 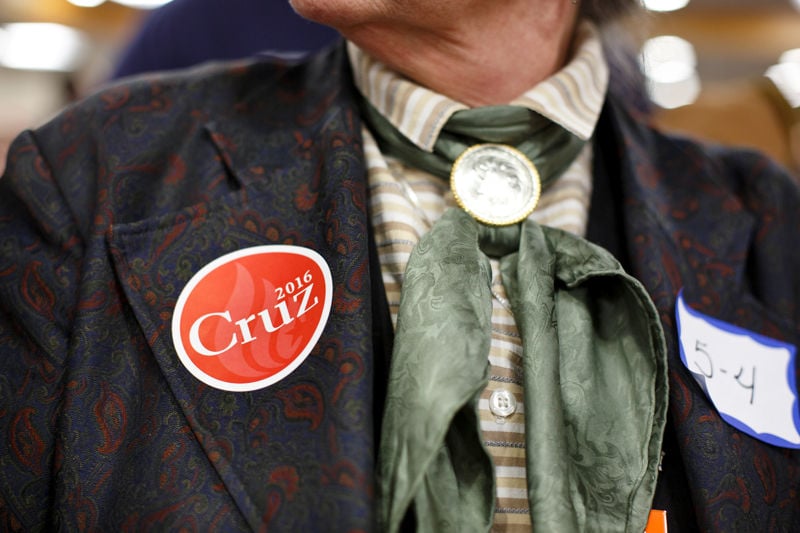 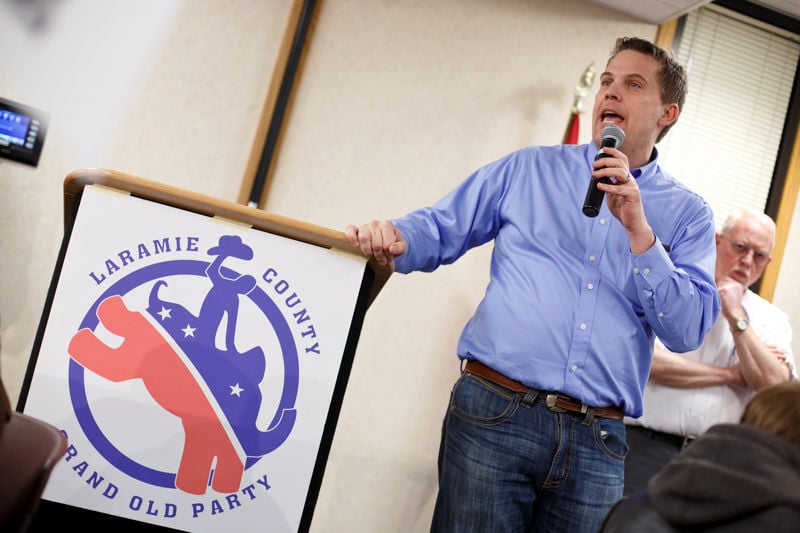 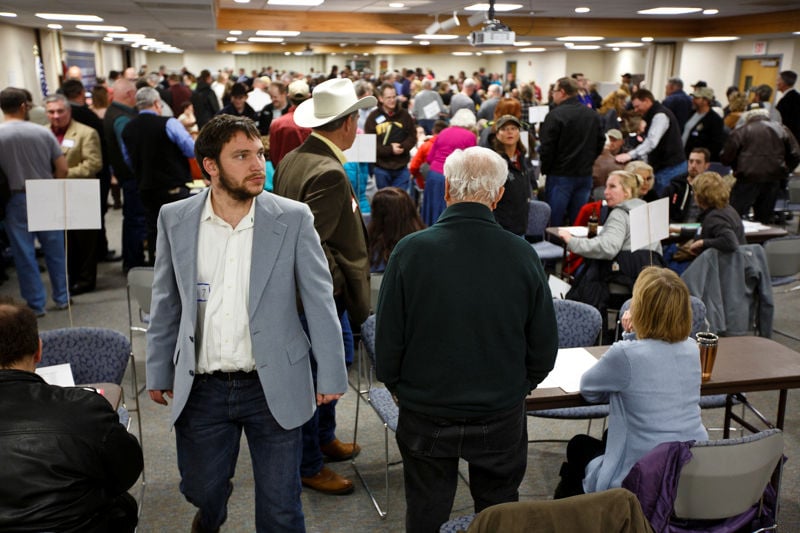 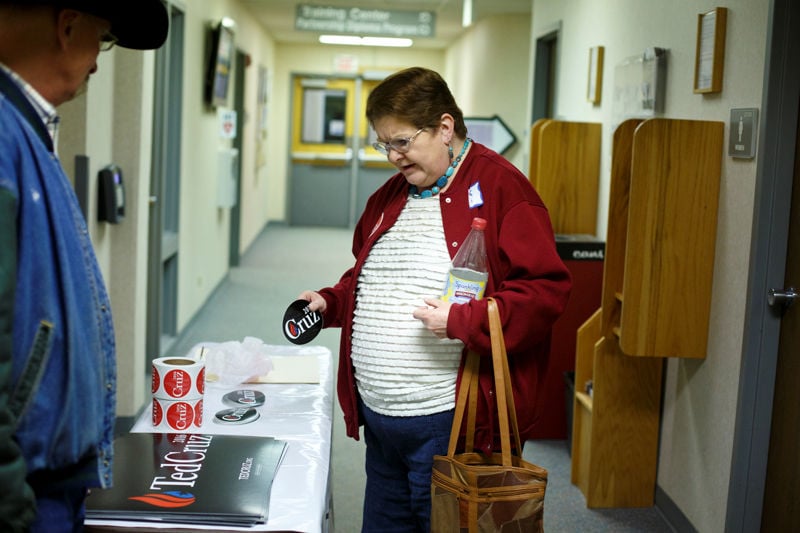 All the parking lots around the building were full, and cars were parked on the shoulder of College Drive.

A line stretched out the door well past the original starting time of 6 p.m., pushing the beginning of the caucus about a half-hour late.

In an average presidential primary election, somewhere between 170 and 250 people show up, Olsen said.

This year the party checked in 778 voters.

Unlike caucuses in other states, the precinct caucus Tuesday night only was a chance for voters to elect representatives from their precincts to attend the county Republican convention on March 12.

Voters also could bring up party business or proposed changes to the bylaws – such as they would rather have a primary election, for example.

Most caucus-goers seemed to have an idea in mind of their preferred candidate.

Lindy and Alan Kirkbride each had a preference – a different one. Lindy favored Gov. John Kasich of Ohio; Alan, Sen. Marco Rubio of Florida.

Lindy Kirkbride said she felt included in the caucus proceedings and that her voice was heard.

“Wyoming is a complicated process,” she said. “Our chairman made it very clear.”

Alan Kirkbride said he knew many of those who attended had pictured the caucus as closer to a primary election.

“I think people really hoped they could express a preference,” he said.

Barbie Harrington, a supporter of Sen. Ted Cruz of Texas, was with her husband, Bradley. Both were first-time caucus goers.

She, too, said she felt her voice was heard “as much as it can be,” adding that the turnout represented an energy Americans have about this election.

“We have America on its knees, and it’s time to turn it around,” she said.

The Cruz campaign had a table outside the main caucus room, handing out stickers and other paraphernalia.

Jerry Ziemann said he was “staying away from Trump” but would vote for the national GOP frontrunner if he became the Republican nominee.

Another first-time caucus goer, Ziemann said he liked the way the caucus was open and voters could discuss various candidates.

However, he said he was worried that the delegates his precinct selected may not ultimately represent the views of the people at the caucus when they get to the county convention.

“We don’t know who our delegates are voting for,” he said.

While Ziemann was open to the idea of a primary, he cited cost as a concern. That sentiment was shared by Alan Kirkbride, a Rubio supporter.

Not all those who attended the caucus were of voting age.

Grace Steenbergen, the daughter of Dale Steenbergen and Sharon Fain, attended the caucus with her parents. She said the event was not what she expected.

(For sake of disclosure, Sharon Fain is a member of the WTE editorial board.)

Grace Steenbergen said she had pictured the caucus as a big town hall-style meeting. She added that her parents have told her the importance of the political process, and she has been following the candidates.

“It seems more people are paying attention to the candidates,” she said.

With the precinct caucus complete, attention on the local Republican side now turns to the county convention.

In all, 305 county-level delegates will have voting power. Those include those selected by the precincts Tuesday night and also precinct committee leaders, who are elected every two years in the August primary.

The 305 delegates will elect one delegate to the Republican National Convention and 75 delegates to the state convention in April in Casper.

There, 14 national delegates will be selected at-large. They will join 12 other delegates elected at the county level and three automatic delegates who are party leaders.

In all, Wyoming will send 29 delegates to the national Republican convention.

- 305 delegates from the local precincts will elect 75 state representatives and one national representative at the county convention next week.

- 29 delegates ultimately will represent Wyoming at the Republican National Convention.

Maybe it's time for politicians on both coasts to refocus

Liz Cheney is the only possible future for Republicans

Cheney has failed us, and should be voted out

Trump is a threat to our country and our safety