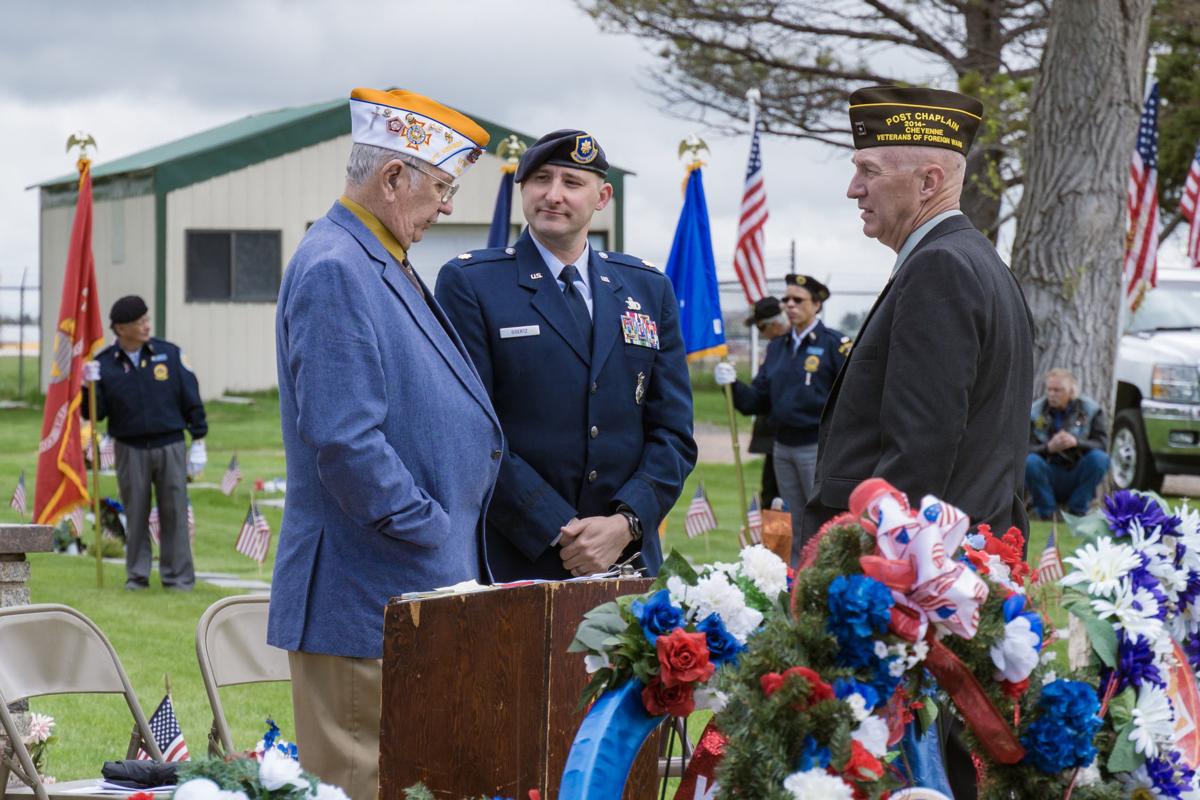 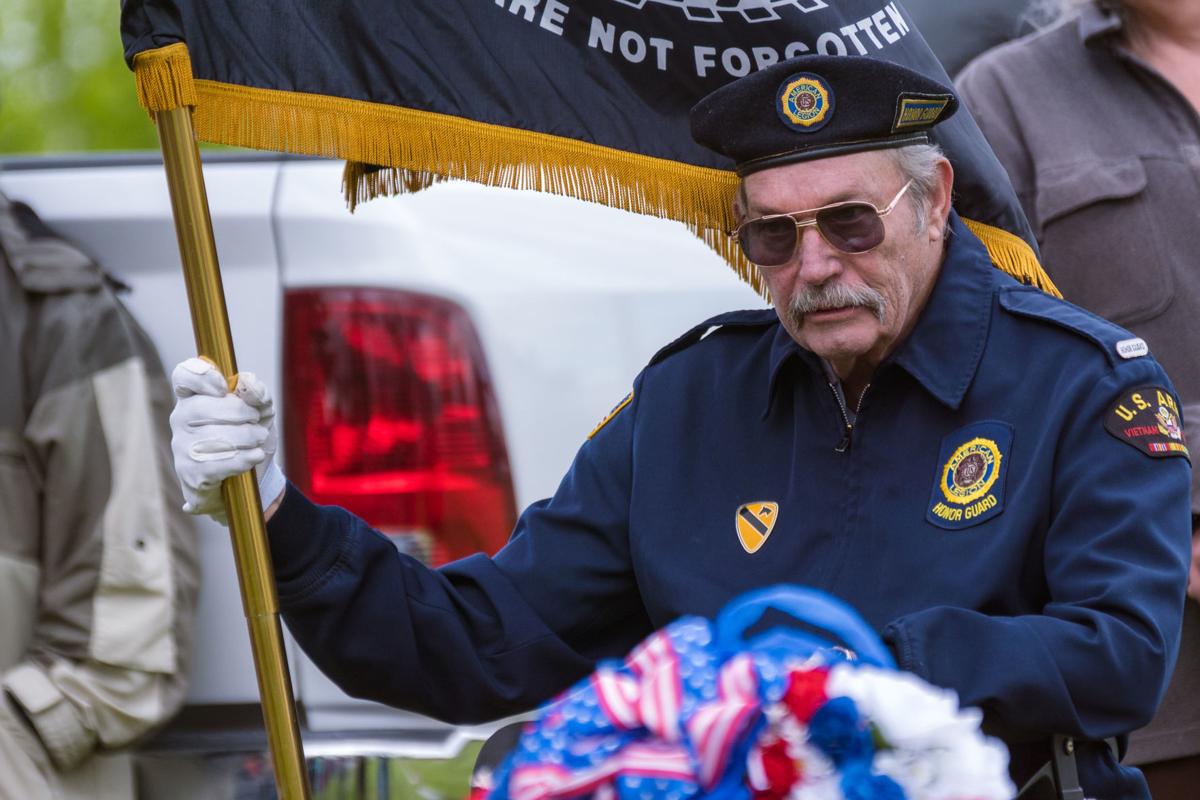 American Legion Post 6 former Cmdr. Jerry Bowen participates as part of the Honor Guard at a Memorial Day ceremony Monday, May 27, 2019, at Cheyenne’s Beth El Cemetery. Bowen’s father, Frank Bowen, was at the caucus in 1918 in Paris when the American Legion was founded. Gary Gwin/For the Wyoming Tribune Eagle 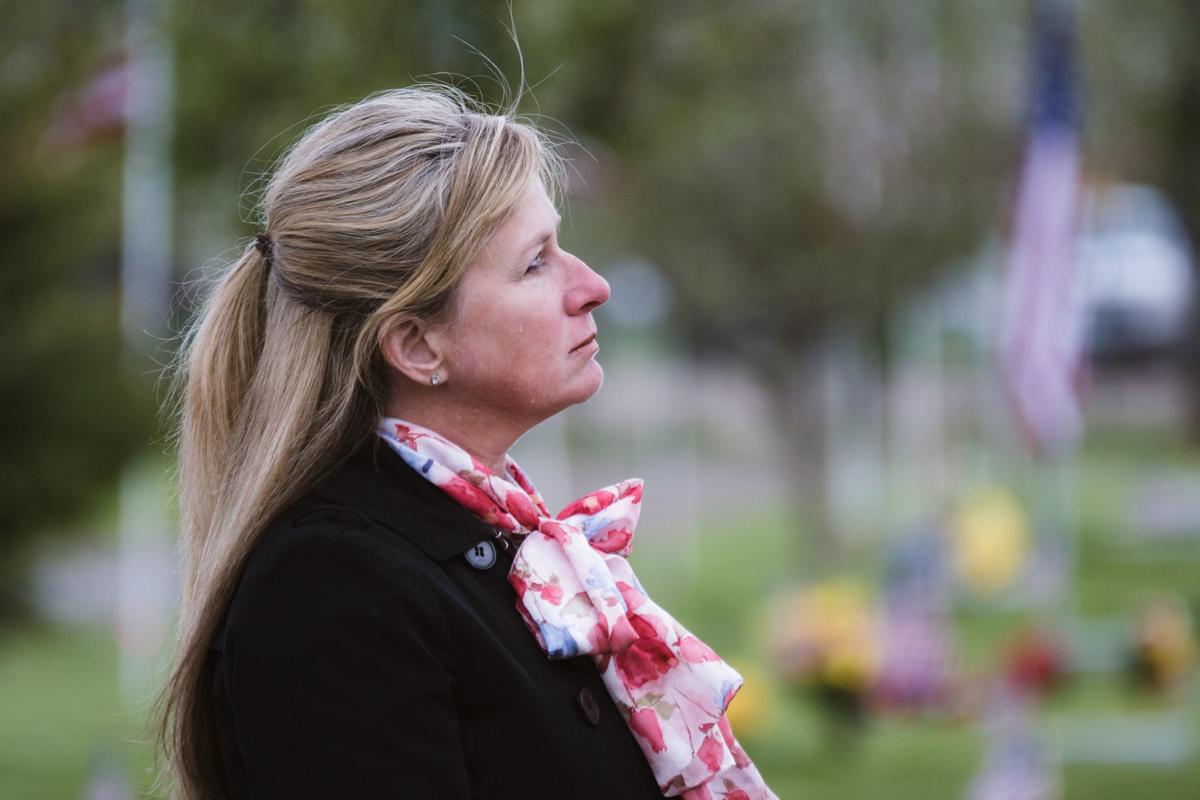 American Legion Post 6 former Cmdr. Jerry Bowen participates as part of the Honor Guard at a Memorial Day ceremony Monday, May 27, 2019, at Cheyenne’s Beth El Cemetery. Bowen’s father, Frank Bowen, was at the caucus in 1918 in Paris when the American Legion was founded. Gary Gwin/For the Wyoming Tribune Eagle

CHEYENNE – The sun peeked out from the clouds, at least for a few moments, as if on cue at 11 a.m. on Memorial Day.

American flags lined the roads of the Beth El Cemetery in Cheyenne. Flags representing each branch of the military flew proudly. American flags were placed at the gravesites of service members.

Following a call to colors and the raising of flags by the American Legion Post 6 Honor Guard, and the Pledge of Allegiance, Mike Nelson, VFW Post 1881 chaplain, provided the invocation prayer.

“Almighty God, we thank you for this day, this chance to come together to honor those who have come before us,” Nelson said.

Cheyenne Mayor Marian Orr relayed a story of a family member who returned from service in World War II, while another family member made the ultimate sacrifice.

“Our country’s strong and free, and may we remain eternally grateful and mindful that those freedoms we enjoy are not without the great price and sacrifice of our men and women in service and the families that are left behind,” Orr said. “May we never forget.”

Maj. Christopher H. Goertz, chief of operations and plans of the 90th Security Forces Group at F.E. Warren Air Force Base, reminded those attending the service that Memorial Day, previously called Decoration Day, was established in 1868 as a day to decorate the graves of those who died in war.

He then spoke of a fellow officer named “Joe,” who Goertz met during an officers’ basic course in San Antonio. Joe, one of the 30 students in the class, demonstrated his superior leadership skills during the four-month course and helped mold the group of young officers into a team, he said.

Joe was killed in Iraq in September 2009 when a roadside bomb detonated beside his armored vehicle. Goertz said he heard the news while stationed in Korea.

“He was killed instantly,” Goertz said. “The news was surreal, and it hit us all hard. The grief was compounded when I learned that his tour was over weeks prior. But he extended, so his replacement could spend more time with his family. While it’s difficult to comprehend that he might still be here, I’m not sure it makes a difference. Joe was there because he was Joe.”

It’s just who he was, he said.

“Joe is one of the countless heroes who sacrificed so that we can enjoy the freedoms that we have today,” he said. “Our history is filled with solders, sailors, Marines and airmen who equally sacrificed.”

The American Gold Star Mothers, a group for mothers who lost sons or daughters in war, presented their wreath first.

A 21-gun salute was followed by the playing of “Taps.” The ceremony concluded with Blomberg performing “God Bless America.”

McDaniel: The time has come to divide the U.S. into two countries