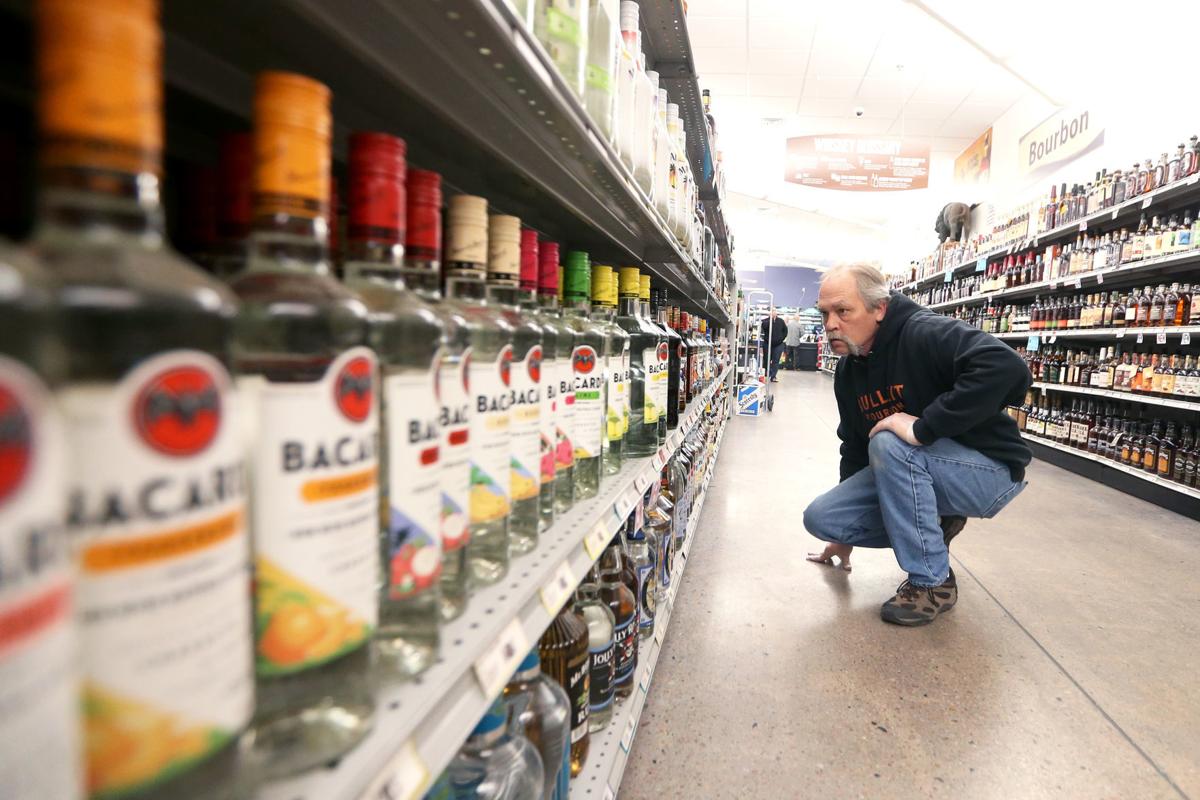 Manager Tom McCleave looks to see how many bottles of alcohol are needed to fill a shelf inside Town & Country Supermarket Liquors Thursday, April 2, 2020, in south Cheyenne. Cheyenne is currently one of several towns in Wyoming that does not allow liquor deliveries. However, members of the Cheyenne City Council have broached the issue with Police Chief Brian Kozak in hopes of a legislative change. Michael Cummo/Wyoming Tribune Eagle 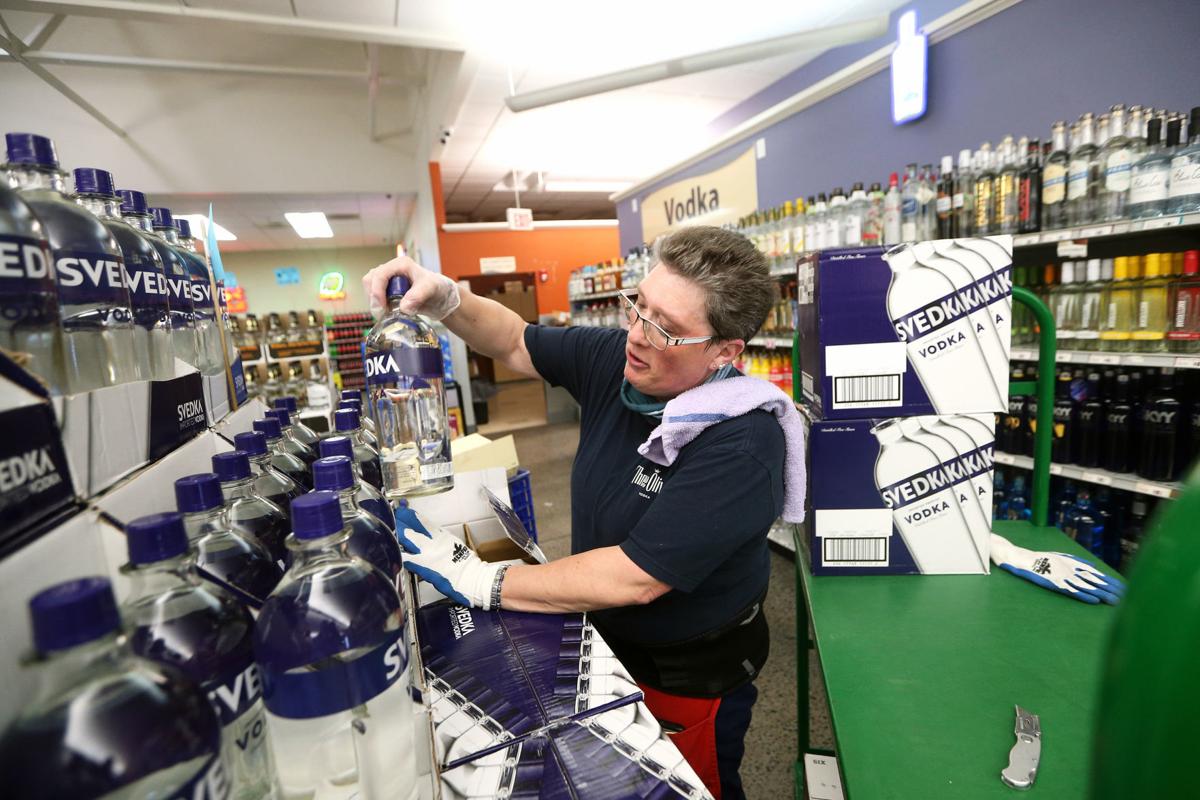 Manager Tom McCleave looks to see how many bottles of alcohol are needed to fill a shelf inside Town & Country Supermarket Liquors Thursday, April 2, 2020, in south Cheyenne. Cheyenne is currently one of several towns in Wyoming that does not allow liquor deliveries. However, members of the Cheyenne City Council have broached the issue with Police Chief Brian Kozak in hopes of a legislative change. Michael Cummo/Wyoming Tribune Eagle

CHEYENNE – A few weeks into the COVID-19 pandemic’s local impact, city officials are eyeing a way to allow Cheyenne’s liquor stores to make deliveries – something already permitted in most other parts of the state.

The spread of COVID-19 to Wyoming has brought some quick changes to how some alcohol is sold in the state. Last week, Gov. Mark Gordon issued an order allowing restaurants and bars with a Wyoming liquor license to sell beer and wine with takeout food orders.

But liquor stores in Cheyenne were unaffected by the proposal, and unlike their counterparts in places like Casper and Jackson, they are restricted by a city ordinance from delivering.

Members of the Cheyenne City Council, along with Cheyenne Police Chief Brian Kozak, have been drafting a new ordinance to get rid of that restriction, while implementing requirements to ensure safe deliveries. The plan is for the council to vote on the proposal during its April 13 meeting.

Under the proposed ordinance, delivery drivers for the stores would have to be at least 21, and deliveries of kegs would be prohibited.

Kozak said he likes the measure, especially given how many people get pulled over while on their way to get more booze.

“I think there’s good reason behind it, and who knows, it might even prevent a DUI or two from occurring,” the chief said.

If the ordinance wins approval from the Cheyenne City Council, it would be effective for 90 days, though both Kozak and Cheyenne Mayor Marian Orr were open to the prospect of allowing liquor store deliveries beyond the COVID-19 outbreak.

Meanwhile, liquor store owners in Cheyenne say they’ve seen a notable, but not gigantic increase in demand over the last few weeks – observations that largely match a broader trend. Nationwide, sales of alcoholic beverages were up 55% in the week ending March 21, compared to the same time a year ago, according to market research firm Nielsen.

Kevin Georges, the owner of DT Liquors, said his two stores in Cheyenne have experienced a slight increase in sales. “People getting one or two items normally, they may get three or four to last them a couple of weeks, as opposed to one,” he said.

In an effort to ensure people don’t overbuy, the store has limited purchase of individual items to three, and it is adhering to the state’s 10-person limit on public gatherings.

The number of patrons has also been limited at Town and Country Supermarket Liquors on South Greeley Highway, and its workers have been continuously wiping down surfaces and wearing gloves to handle transactions.

While store workers and owners have already adapted in some ways, they are prepared for the possibility of more changes. As of Thursday, the governor had yet to issue a stay-at-home order for Wyoming. If that changes, Cory Talich, who runs Town and Country with his wife, said his store will be even more diligent in following guidance from the governor and the Centers for Disease Control and Prevention.

“If the recommendation was to do curbside, like restaurants are doing, we would do that,” Talich said. He was also interested in the potential for his store to deliver, though he added he would want to be careful rolling out such a setup.

City officials are expected to discuss the proposal during a Public Services Committee meeting next Tuesday, and the full council could then vote on the ordinance April 13.

Unlike in places like Casper and Jackson, liquor stores in Cheyenne are restricted from delivering their products. Amid the COVID-19 pandemic, the City Council may vote to change that later this month.

Lenhart: Be careful how you vote in the primaries

McDaniel: How many of you want to see more billionaires in the world?

Republican Party platform is no longer a given year to year

Why are so many vehicles on the road with no license plates?

Redskins name is not derogatory to this Native American