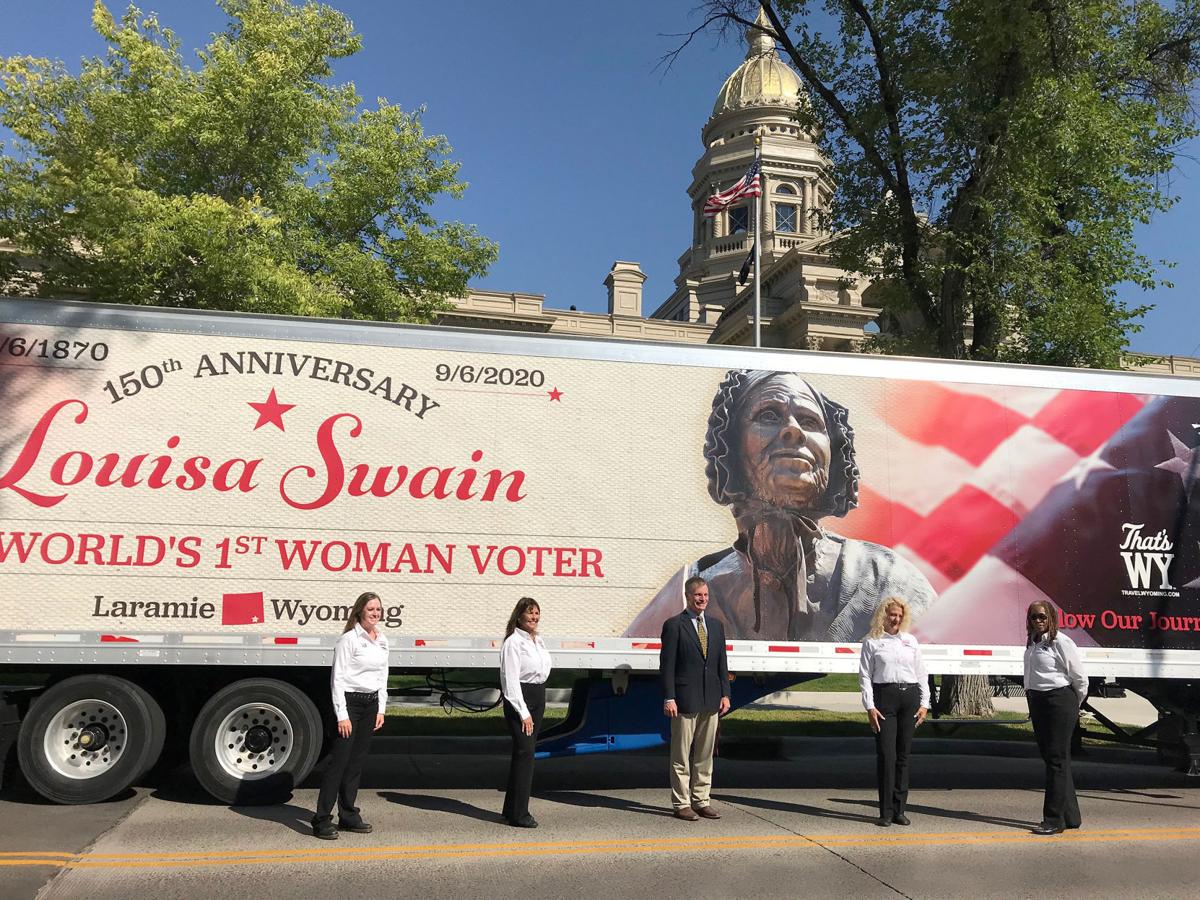 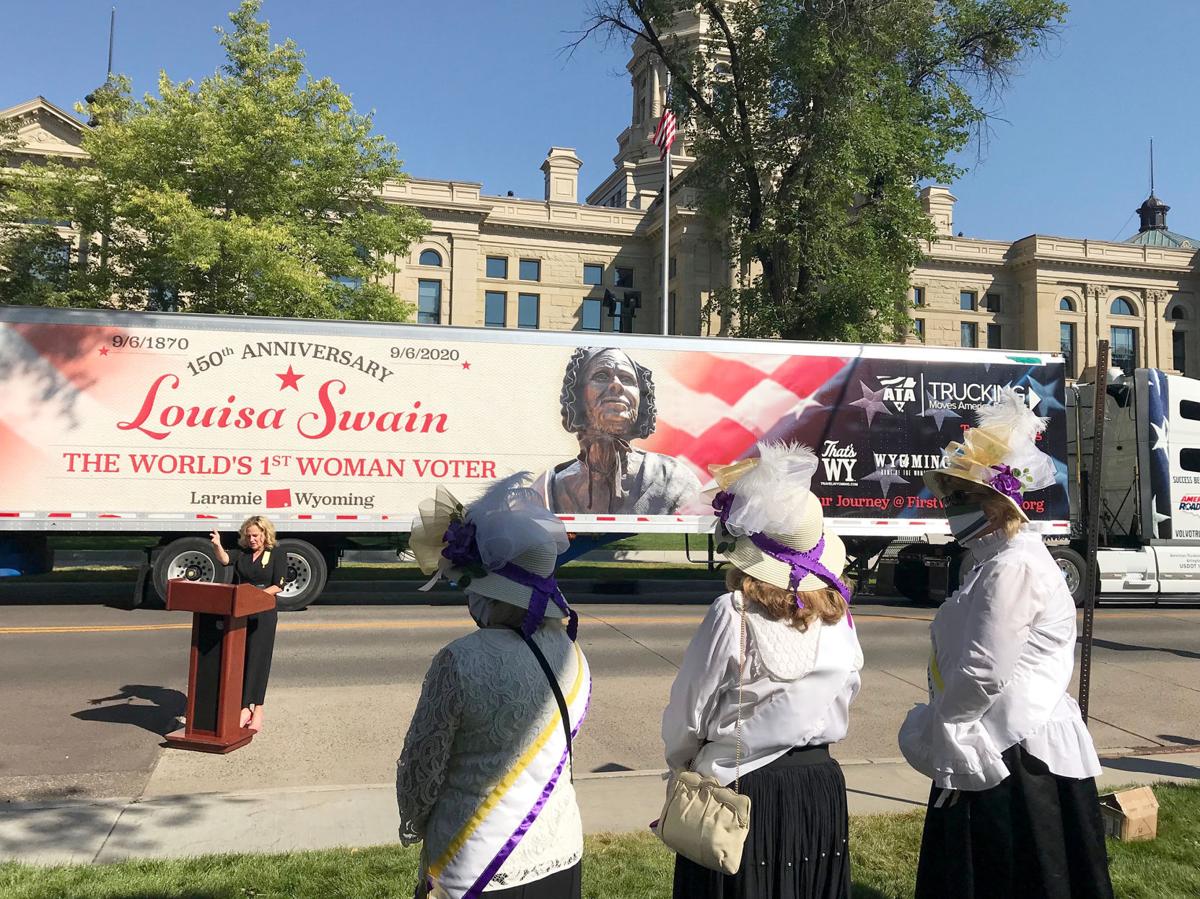 State Superintendent of Public Instruction Jillian Balow gives remarks in front of the commemorative Louisa Swain semitruck, which made a stop in front of Wyoming's Capitol Friday morning. Four female truck drivers drove the truck across the country to celebrate the 150th anniversary of Swain casting her ballot. Margaret Austin/Wyoming Tribune Eagle

State Superintendent of Public Instruction Jillian Balow gives remarks in front of the commemorative Louisa Swain semitruck, which made a stop in front of Wyoming's Capitol Friday morning. Four female truck drivers drove the truck across the country to celebrate the 150th anniversary of Swain casting her ballot. Margaret Austin/Wyoming Tribune Eagle

CHEYENNE – Dee Sova started driving trucks in 1991, when she was 24 years old. While only about 7% of truck drivers are women, according to the American Trucking Association, the difference was even more stark when Sova started her career in the industry.

So when she was offered the chance to drive across the country in a semitruck celebrating the 150th anniversary of Louisa Swain’s historic vote in Laramie, the first ballot cast by a woman, Sova jumped at the chance.

“It’s women like her that pioneered a movement; it was bigger than just voting. For us to be able to walk into the career that we all have loved for all this time, it’s because of women like her that had the courage to step into places that most women would not,” Sova said. “And it takes the same amount of courage, at least it did when I started, to walk into a truck driving school and say, ‘Hey, I want to learn how to drive a truck.’”

The cross-country, commemorative semitruck tour was put on the Wyoming Office of Tourism, The Louisa Swain Foundation and the American Trucking Association. The team of female truckers made stops at a number of historic landmarks along the way, and connected with women from multiple motor associations.

The truck will arrive in Laramie – where Swain cast her vote on Sept. 6, 1870 – on Saturday as the last stop on the trip.

At the Capitol on Friday, American Trucking Association CEO Jack Spear said, “Today, we honor Louisa’s courage and determination by showcasing her contribution to women throughout our nation and throughout the world.”

With Sova and three other female truck drivers – April Coolidge, Tina Peterson and Rhonda Hartman – at the helm, the Louisa Swain-themed truck traveled from Washington, D.C., through a number of states before reaching Wyoming.

Highlighting the women behind the wheel, Spear said, “Four modern-day pioneers pursued careers in a traditionally male-dominated industry undeterred. ... It’s fair to say that these four women are not only outstanding ambassadors of our great industry, they are the heartbeat of our nation’s economy.”

And while the female truck drivers help uphold critical infrastructure in the U.S., Sova said it wasn’t always easy paving her own career path and earning her peers’ respect in such a male-dominated field. Now, as an established professional, Sova encourages other women to enter the industry.

“We constantly have to be pioneers for what we do,” Sova said.

A century-and-a-half ago, Swain’s simple act of voting made her a pioneer in the women’s suffrage movement, paving the way for women to serve on juries and hold elected office. Giving remarks upon the truck’s arrival, Superintendent of Public Instruction Jillian Balow said Swain was just an ordinary person who changed the world in an extraordinary way.

“All of us here today have Louisas in our lives, and we don’t need to look far. Everyday strength and responsibility in our community really does change the world,” Balow said.

A semi truck celebrating the 150th anniversary of Louisa Swain's historic vote – the first ballot cast by a woman – reached Wyoming's Capitol Friday morning on its way to Laramie from Washington, D.C.