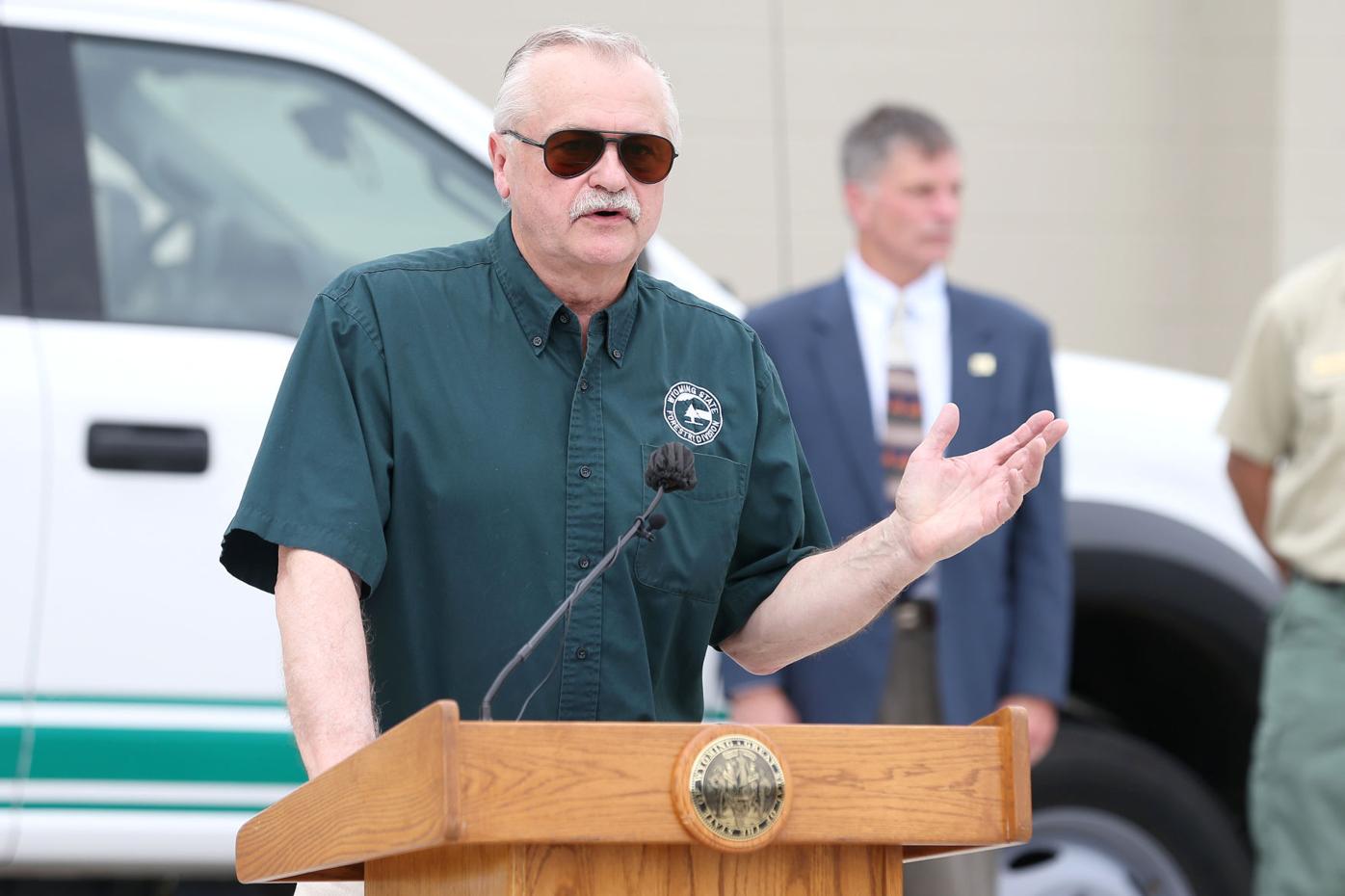 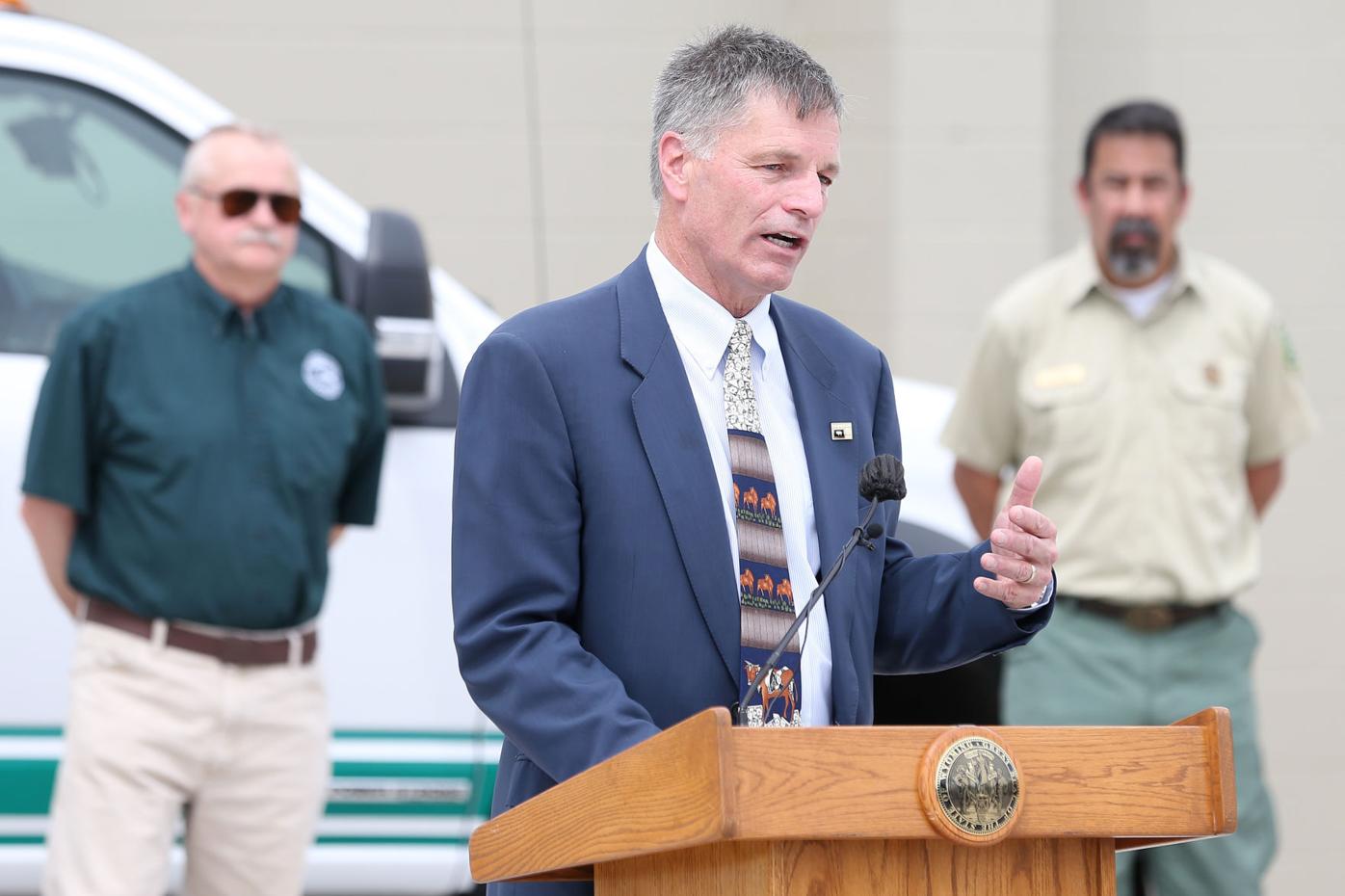 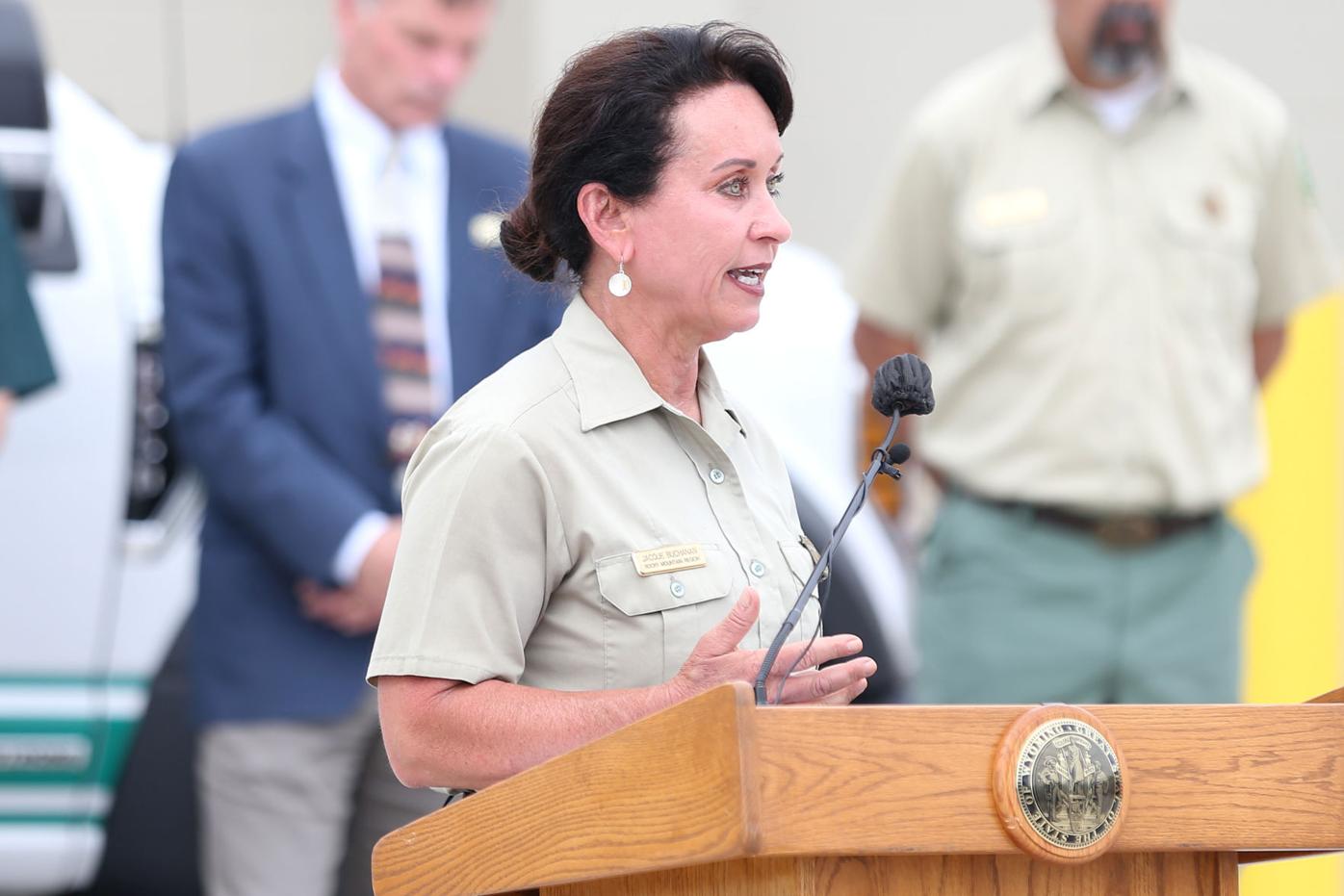 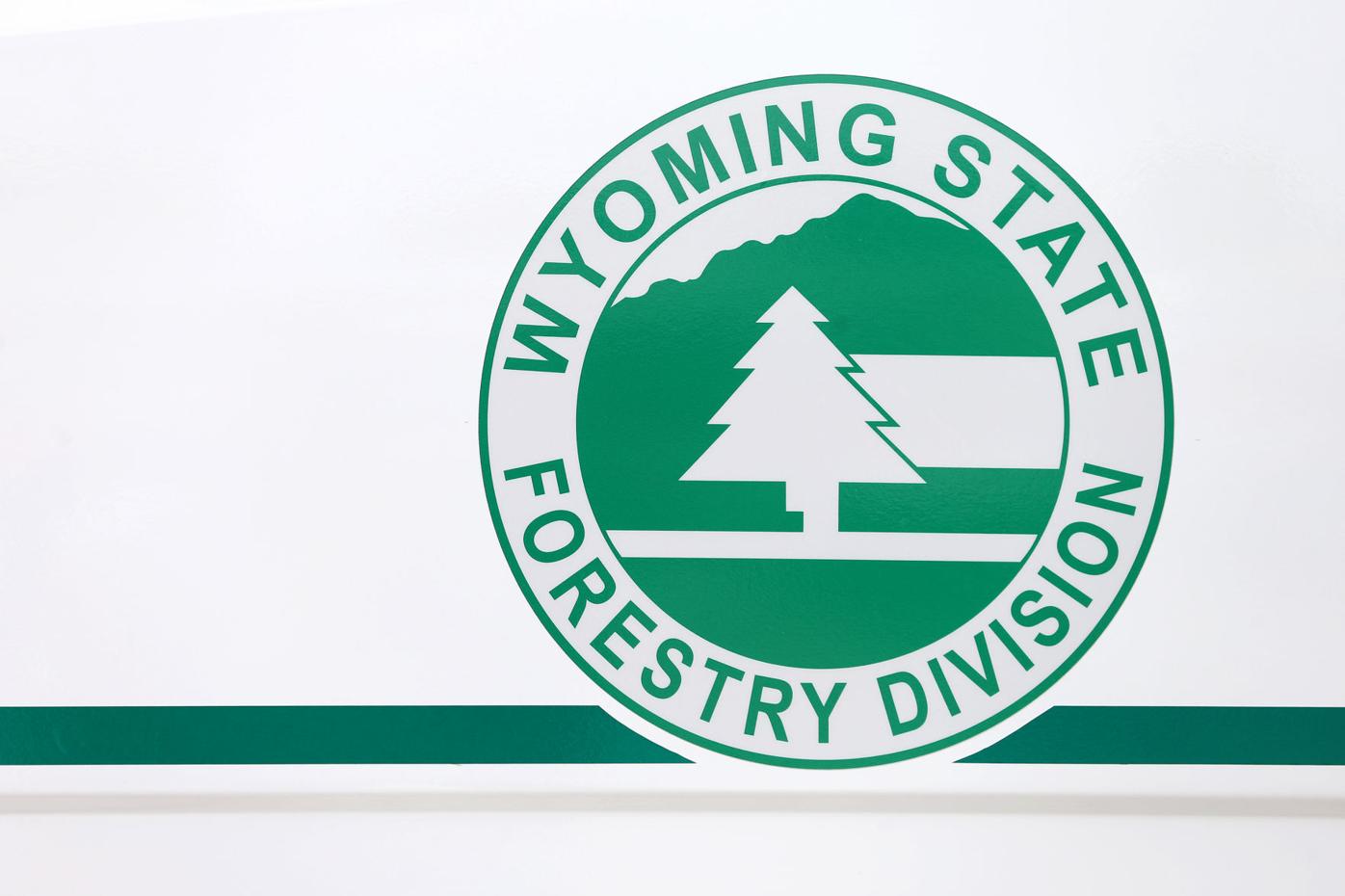 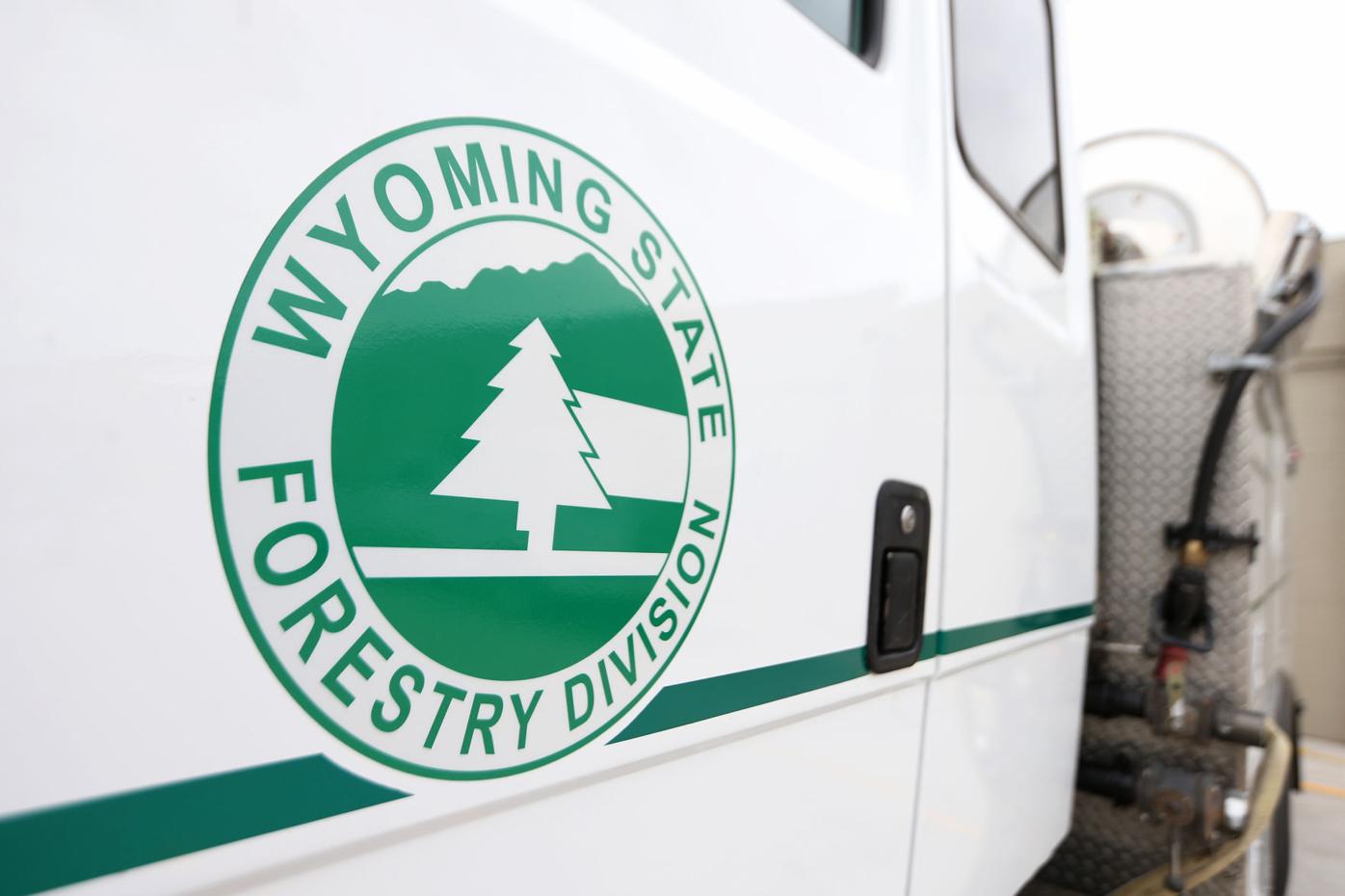 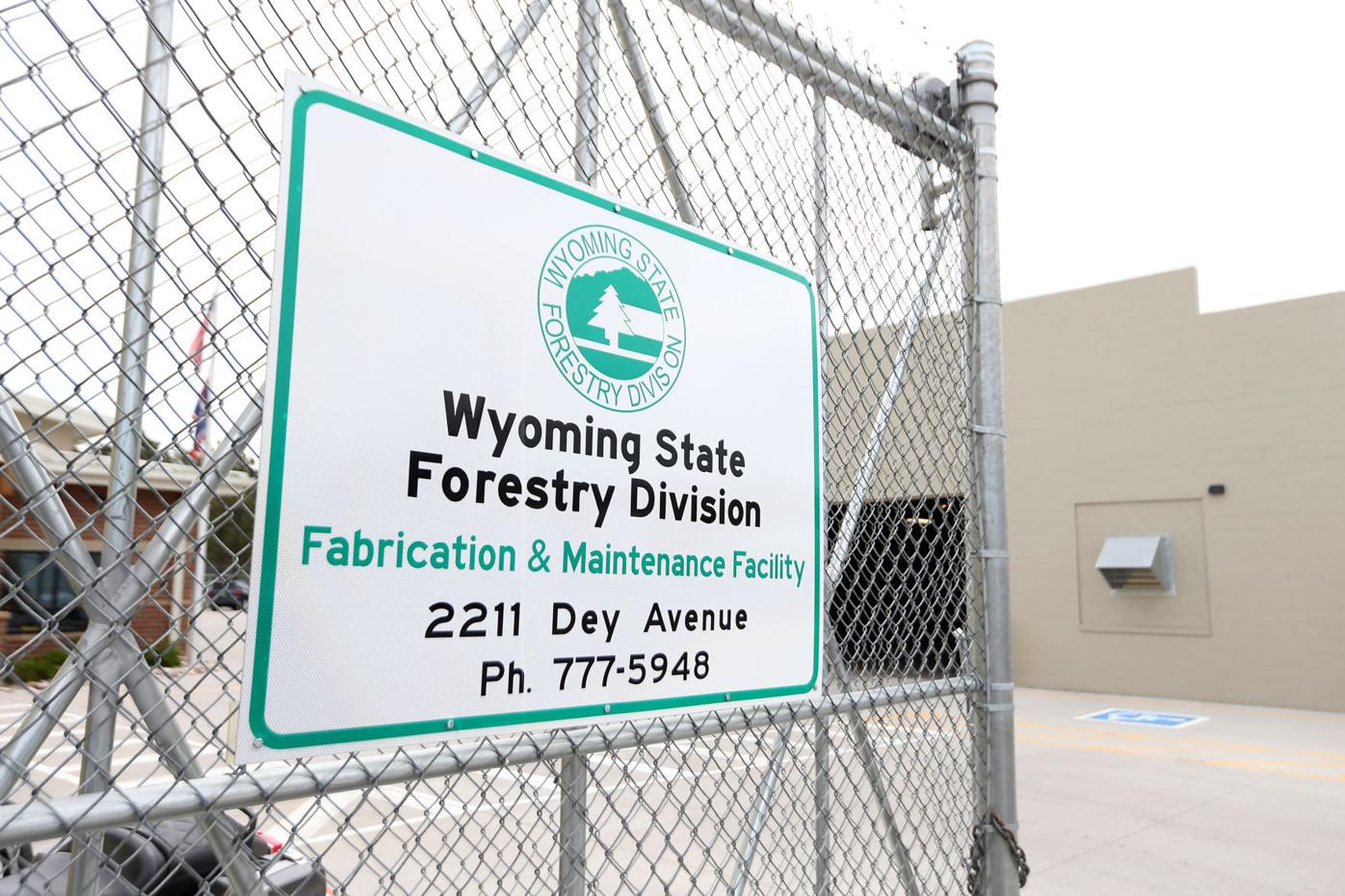 CHEYENNE – Following a dramatic and record-breaking fire season for the west in 2020, officials warn this season could also be above average.

Wyoming State Forester Bill Crapser, along with Gov. Mark Gordon and other state and federal officials, gave an overview of the state’s wildfire outlook Thursday morning at the State Forestry Division’s Cheyenne maintenance facility. Predictions from meteorologists and fire behavior specialists put Wyoming “on the high end of normal” for fire potential for the rest of June into July, Crapser said. For the second half of July and all of August, an above-normal fire season is expected.

“It could be a fairly significant fire season,” Crapser said. “We have quite a few fires burning already for this early in the spring, and things could be pretty interesting as we move forward.”

Later in the briefing, Crapser and other firefighters confirmed that the outlook for the upcoming fire season is actually slightly worse than the one that came before last year’s fire season.

Still, officials expressed confidence about having the resources to effectively fight this season’s wildfires.

The Rocky Mountain Region has 525 firefighters going into this fire season, along with five type one hotshot crews, which Buchanan said can “make or break” fire response. The Forest Service also has additional firefighting aircraft for the upcoming season.

“The bad news: we burned a lot of acres. The good news is, we are probably better positioned today to respond ... than we have been in a while because we had so much activity last year,” Buchanan said.

Buchanan said the agencies were “well-positioned” with funding, equipment and manpower. Crapser added that Gordon and the state Legislature “understand the importance of wildfire and have been very supportive.”

Last year’s Mullen Fire, which started in Wyoming and spread into Colorado, burned 176,000 acres of forest.

“When the fire’s over, the work’s not done, and we have a tremendous amount of work left to do on the ground here in Wyoming and in Colorado, just dealing with that fire and the effects from the resource damage,” Buchanan said. “Hopefully we’ll have a continuation of what we’ve had so far – some rainfall, but not torrential downpours, because that’s where we get caught in some additional issues.”

There are ongoing conversations about where to position these and other resources, including large air tankers, engines, helicopters and additional firefighters, based on risk to life and property, said Tim Garcia, acting deputy regional forester for the Forest Service’s Intermountain Region.

Garcia said this region, which includes the Bridger-Teton National Forest in western Wyoming and forests in Idaho and Utah, had been seeing grasses and other plant life that were very receptive to fire during prescribed burns early this season.

“Given that, we really ask for the public’s help in doing everything they can to prevent human cost fires. If we take that out of the equation, it makes our firefighters’ work a whole lot easier and safer,” he said.

“I think Tim’s passing tells us that fire is a very real danger, and this summer, where we’ve had so many dry, dry areas in the state, dry areas in the West, really compounds the problem that we saw last year,” the governor said. “We love our outdoors, and we really respect those who take the time to do things right. So if you’re out camping, make sure that you put the fire out.”

Gordon announced this week the launch of a centralized website intended to provide detailed information on drought conditions in the state. The website, drought.wyo.gov, divides information up by sector that may be impacted by drought, such as agriculture, tourism, recreation, municipalities and water utilities.

“Wyoming has been experiencing drought conditions since 2020 and this past winter’s average snowpack did not alleviate dry soil conditions that existed entering the winter,” he said in a Wednesday news release announcing the drought website.

Kim Liebhauser, acting director of the Wyoming Bureau of Land Management, said BLM is planning prescribed burns on 6,000 acres of land in the state in an attempt to prevent potential wildland fires.

Liebhauser said that, on average, human-caused fires make up 87% of wildfires each year, often occurring near roads, communities and recreational areas. She emphasized the importance of preparedness and advised people to clear potential fuel away from their homes and have an evacuation plan.

Crapser also acknowledged the Wyoming Rural Firefighters Association and other local fire departments throughout the state.

“The counties and the rural fire folks are the backbone of our wildland fire in the state. They’re usually the first to respond and sometimes the last to leave,” he said. “Without the counties, without the work the volunteer fire departments do, none of us would be successful.”

Wyoming State Forester Bill Crapser and other state and federal officials gave an overview of the state's wildfire outlook at a Thursday morning news conference. Predictions put Wyoming "on the high end of normal" for fires for the rest of June into July, and above-normal for the second half of July and all of August, Crapser said.

Preparing for a wildfire

The American Red Cross has a list of things those living in wildfire-prone areas can do to prepare, including: