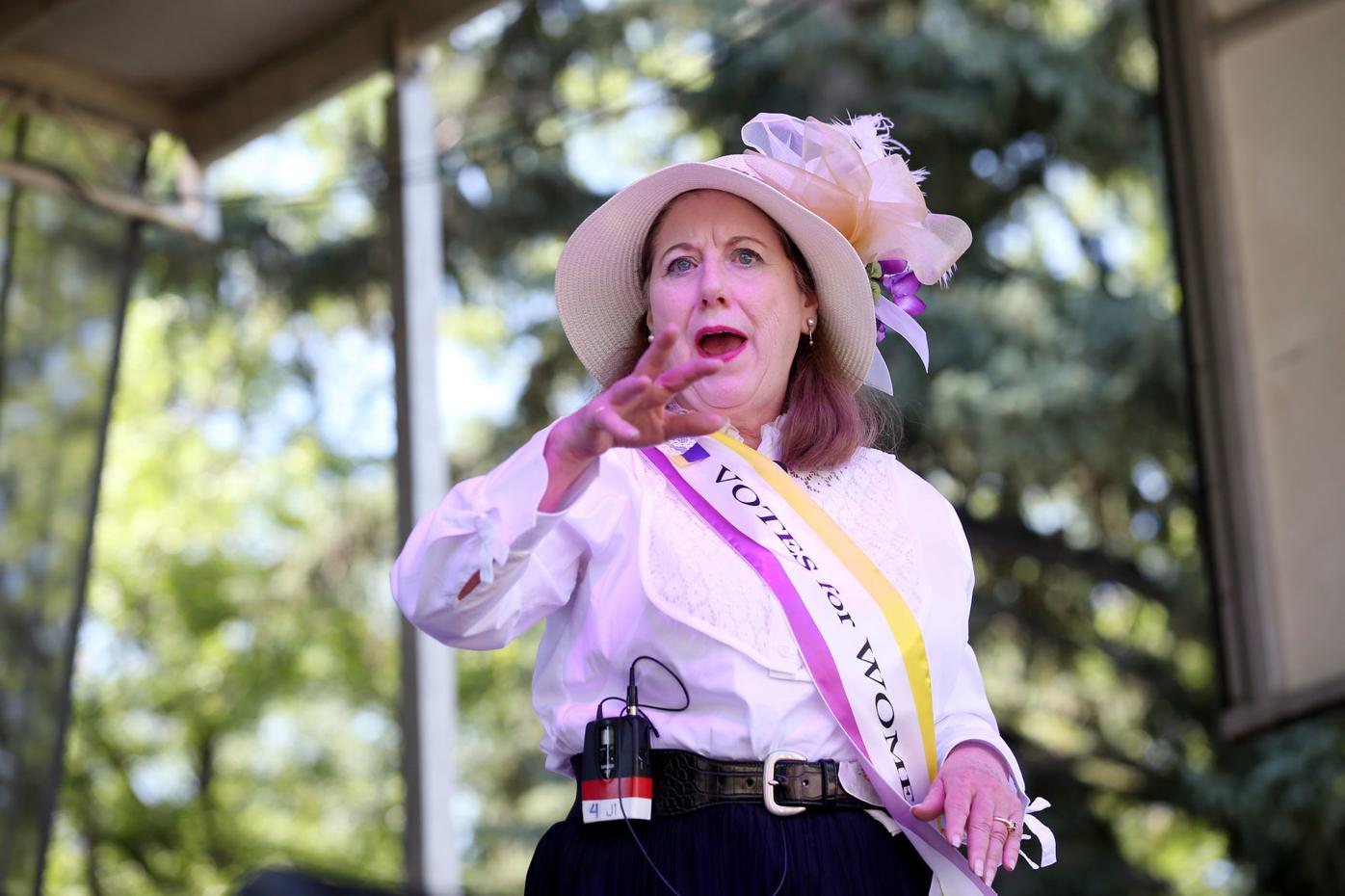 Rosalind Schliske, playing Julia Bright, performs during a performance by A League of Her Own Acting Troupe during the Capitol reopening festivities on Wednesday, July 10, 2019, in downtown Cheyenne. Renovation and restoration of the 130-year-old Capitol, which is one of only 20 state capitols designated as a National Historic Landmark, took four years and more than $300 million. It was reopened with fanfare to the public on Statehood Day. Michael Cummo/Wyoming Tribune Eagle 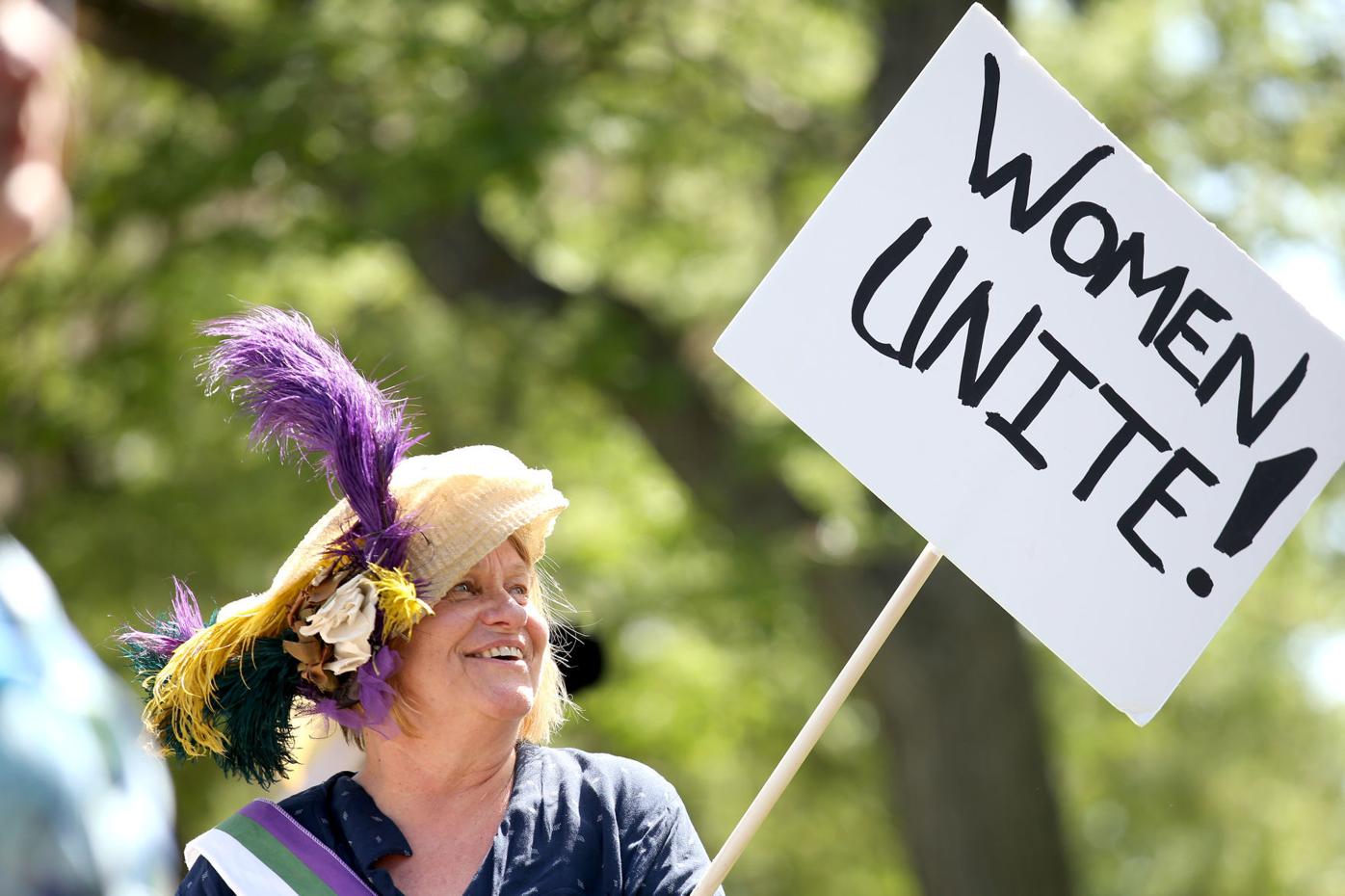 Astrid holds a “Women Unite!” sign while watching the A League of Her Own Acting Troupe during the grand reopening of the renovated state Capitol on Wednesday, July 10, 2019, in downtown Cheyenne. Renovation and restoration of the 130-year-old Capitol, which is one of only 20 state capitols designated as a National Historic Landmark, took four years and more than $300 million. It was reopened with fanfare to the public on Statehood Day. Michael Cummo/Wyoming Tribune Eagle

CHEYENNE – While the people of Cheyenne were celebrating the reopening of the Wyoming State Capitol, touring its beautifully restored halls and rooms, the League of Women Voters was honoring a few women who changed the course of history in both Wyoming and, ultimately, the United States.

Five members of the League staged the play “Wonderful Wyoming Women Voters” Wednesday afternoon on the north lawn of the Supreme Court Building, just yards away from the Capitol.

The law allowing women to vote was passed in December 1869, with the first women voting in 1870. Louisa Ann Swain of Laramie was the first woman to cast a vote in a general election.

The show kicked off with a performance by the Fort D.A. Russell Post band, which played a number of classic tunes from the mid- to late 1800s, including the National Anthem.

The play officially began with a talk from Keren Meister-Emerich, who discussed her work as a researcher who has been looking into the history of women’s suffrage in Wyoming.

But she knew there were a few tidbits she needed to clarify.

“I’ve come across some information, but how do you know what’s the truth?” she asked the audience.

What better way to find out than to travel back in time to talk with the women who spearheaded the movement?

First, she spoke with Julia Bright (played by play co-writer Rosalind Schliske), whose husband, William Bright, was a legislator in the first territorial legislature. As a woman who’d been passionate about women’s suffrage nationally when she lived in Washington, D.C., she continued her fight (albeit more quietly) when she and her husband moved to South Pass City.

Schliske, as Bright, discussed the political environment of Wyoming in the late 1860s, mentioning how the entire Legislature was filled with Democrats besides then-Gov. John Campbell, who was a Republican.

Bright/Schliske clarified that the Legislature wanted to give women the right to vote so more people would move to the territory.

"The People’s House" is reopened for business

CHEYENNE – Before Wednesday’s grand reopening of the newly renovated state Capitol, one would be forgiven if they didn’t believe the four-year…

“But really, nobody should ever ask how laws or sausages are made,” she joked.

Next, Meister-Emerich spoke with Esther Hobart Morris, known as the “mother of women’s suffrage in Wyoming,” who was played by Denise Burke.

Burke talked about Hobart Morris’ time as the first woman justice of the peace, her push to crack down on crime, and, of course, her role in the suffrage movement.

“I attribute my success to the fact that I’ve always believed in the rights of the underdog,” Burke said while in character. “I even rallied against slavery at one time.”

Following this, Meister-Emerich met with Amalia Post, who was played by show co-author Mary Guthrie. Post helped defend the right for women to vote in the 1870s, when the Legislature considered repealing the law.

She ended up lobbying Gov. Campbell, who ultimately wrote to Post, telling her how her fierce words and strong conviction helped convince him that women should continue to be able to vote in Wyoming.

She was also a foreman on a murder case during this time, when women usually weren’t allowed to serve on juries.

Finally, they spoke to Theresa Jenkins, who was played by Laramie County Clerk Debra Lee. Jenkins was a major advocate for national women’s suffrage, but spent much of her focus on Wyoming. She even once raced to the Legislature to stop the lawmakers from deleting the women’s suffrage law from the Constitution.

Later that same night, she gave birth to a healthy baby girl.

“To equal justice,” the women cried at the end of the show.

Guthrie and Schliske began working on the play earlier this year, around January or February. Their original version was much more dense with facts and also included two male characters.

“We decided to pare it down a bit because we wanted it to be more palatable and shorter,” Schliske said.

The women were thrilled with the crowd turnout for the play Wednesday afternoon, noting that they hope they did their characters justice. They also joked that they hoped their acting ability was on par, since most of them had never acted before.

Ultimately, they hoped both the women and men in the audience recognized that it hasn’t been that long since women were granted the right to vote.

If you missed the play, though, don’t fret. The League of Her Own Acting Troupe will stage the show again in mid-September at Laramie County Community College.

“We want people to get more involved in their government,” Guthrie said. “We’re playing strong women, and I believe that all of the women in the show are strong, powerful women. We wanted to bring these women back to life and tell their stories the way they deserved.”

Ellen Fike is the Wyoming Tribune Eagle’s features editor. She can be reached at 307-633-3135 or efike@wyomingnews.com. Follow her on Twitter at @EllenLFike.

Ellen Fike is the Wyoming Tribune Eagle’s features editor. She can be reached at efike@wyomingnews.com or 307-633-3135. Follow her on Twitter @EllenLFike