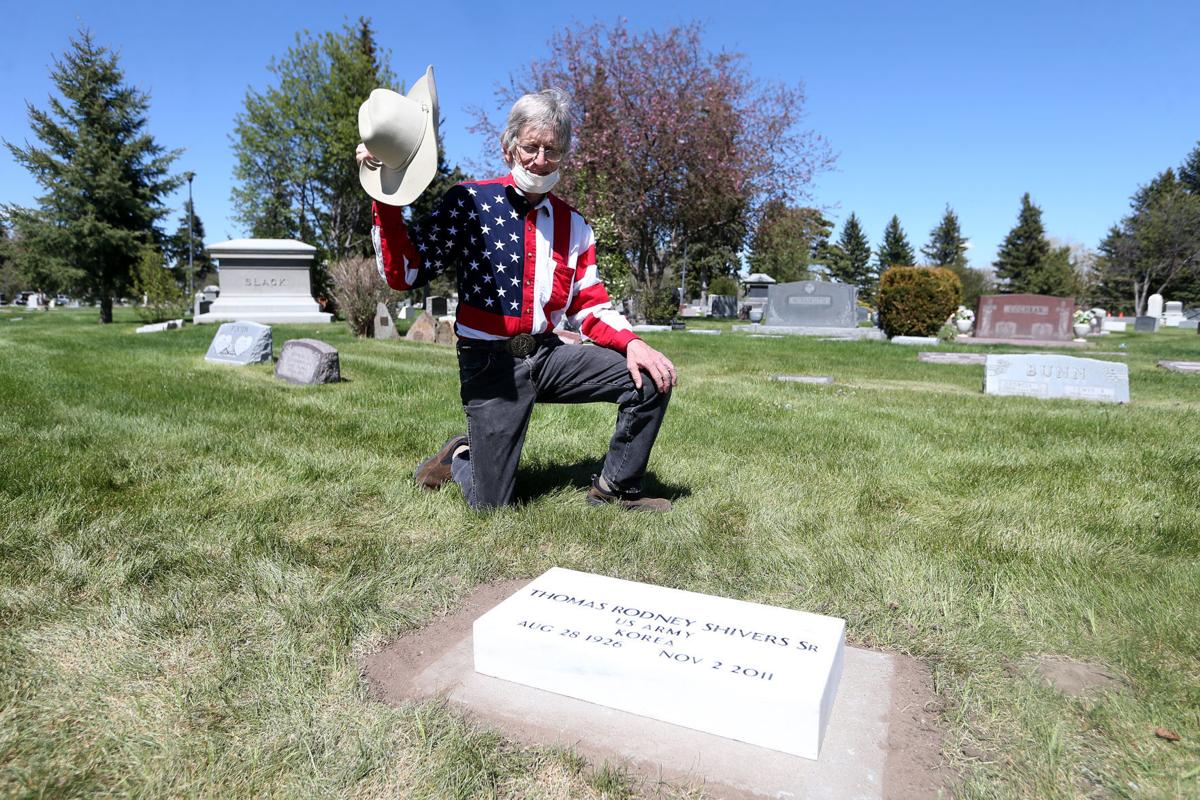 Jim Shivers takes his hat off in salute while looking at the new veteran headstone for his father Thomas Shivers Sr. for the first time at Lakeview Cemetery on Friday, May 22, 2020, in Cheyenne. Shivers waited for more than a year for the new veteran headstone, which took three attempts after the first two broke en route to Cheyenne. Michael Cummo/Wyoming Tribune Eagle 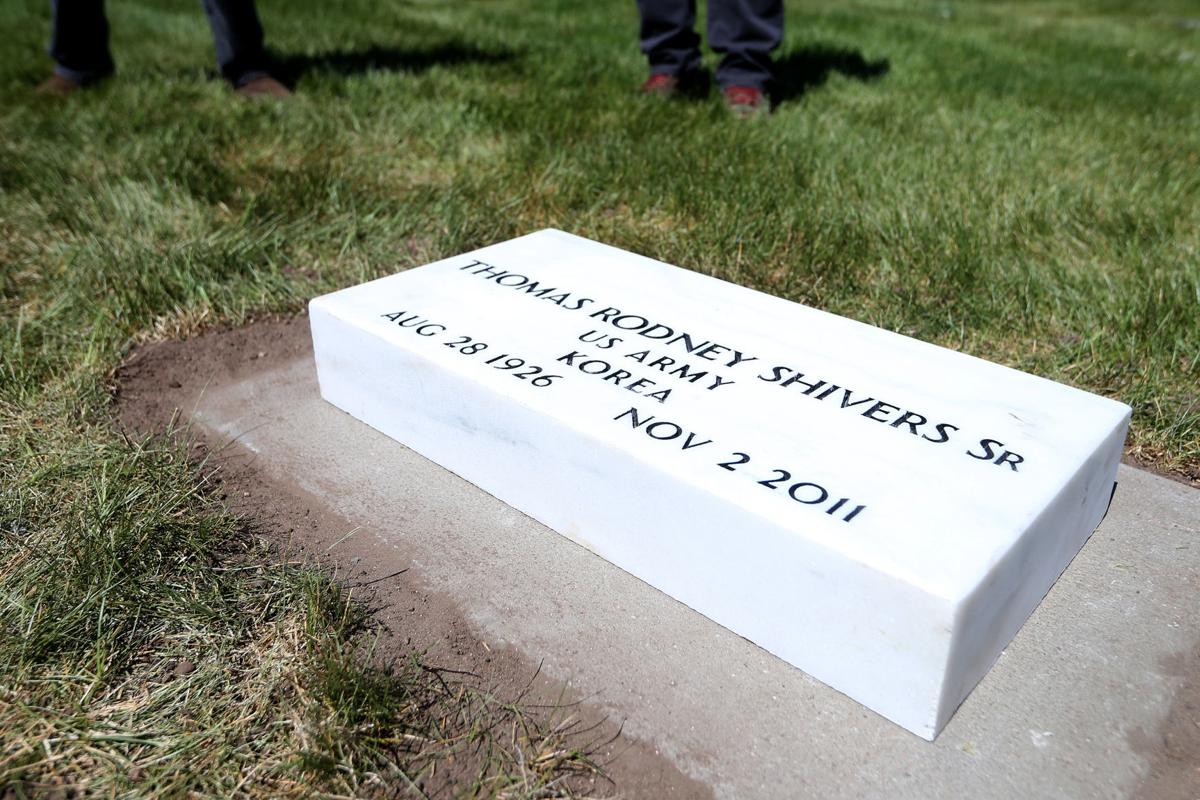 Jim Shivers takes his hat off in salute while looking at the new veteran headstone for his father Thomas Shivers Sr. for the first time at Lakeview Cemetery on Friday, May 22, 2020, in Cheyenne. Shivers waited for more than a year for the new veteran headstone, which took three attempts after the first two broke en route to Cheyenne. Michael Cummo/Wyoming Tribune Eagle

CHEYENNE – This Memorial Day, one son will rest easy, knowing his father’s grave finally honors the late veteran for who he was: a hero committed to his country.

Last summer, Cheyenne resident Jim Shivers went to the Lakeview Cemetery office to pick out a headstone for his father, Army Staff Sgt. Thomas R. Shivers Sr., 10th Mountain Division. He noticed a specific headstone for veterans, and an employee said if he could bring in a few documents proving his dad served, Shivers would be able to get the headstone for free.

That sent Shivers on a nearly year-long path, with more twists and turns than he ever expected.

The first step was filling out VA Form 40-1330, Claim for Standard Government Headstone or Marker, which states, “Any deceased veteran who was discharged under conditions other than dishonorable or any service member of the Armed Forces of the United States who dies on active duty may be eligible.”

Shivers’ father, who fought in the Korean War, fit this description, but it was the next listed requirement that sent the determined son on a wild goose chase: “Please attach a copy of the deceased veteran’s discharge certificate (DD Form 214 or equivalent) or a copy of other official document(s) establishing qualifying military service.”

Shannon Null, club manager at American Legion Post 6, helped Shivers fill out VA Form 40-1330, but they didn’t have any discharge certificate to attach.

“I looked all over my house, and my brother looked around his, and we couldn’t find it,” Shivers said. “So we requested it (from the National Personnel Records Center in St. Louis) and it said ... they had a fire and all the records from then are unable to locate … that ‘the original record needed to answer your inquiry was lost in the July 1973 fire.’”

Thomas Shivers Sr.’s files were part of the documents that were lost.

Shivers realized he might have to take a different approach and search for something that showed his dad was a veteran when he left the service and went to work for the Union Pacific Railroad.

That led him to the Laramie County Library, where he met up with Kim Storey, an old classmate who works for the library’s Interlibrary Loan Services. He planned to ask if she could hunt down a document showing his dad’s last posting, which was Fort Riley, Kansas, but she had already been through this before and knew someone who would be more helpful.

“By the time I got out there (to Nicks’ office), she had found my dad’s records,” Shivers said. “I sent them in, and my dad was approved.”

A phone call to Nicks confirmed that the turnaround took just an afternoon.

“Next of kin is pretty rare (to make that kind of request), so I’m glad we were able to do that for him,” she said. “What archivists are supposed to do is create redundancies, so we’re a backup – even if there was a fire, there’s a chance we have a (DD Form) 214 for a person living in Wyoming at the time.”

Nicks said it was rewarding to help Shivers after all he went through to find the document, and she suggests others trying to locate their own loved one’s discharge certificate should check with their state or county archives and military department if they can’t find anything through the National Personnel Records Center.

That final form made all the difference for Shivers, but it wasn’t the last roadblock he faced on his mission to properly honor his father. Two headstones broke during shipment in the past couple months, and it was just a few weeks ago that a third FedEx shipment arrived in one piece at Lakeview Cemetery.

The headstone was finally placed on his father’s grave Friday – just in time for Memorial Day.

Shivers, a reserved and humble man, made an audible grunt over the phone when asked what kept him motivated throughout this challenging process.

“There’s probably a lot of people like me, sons and daughters (of veterans) who have no idea about this, and I wouldn’t have known it if I didn’t happen to walk into the cemetery office and there was a headstone there,” Shivers said. “It’s just something I felt like I needed to share.”

Besides, he added, it was fun to play history detective.