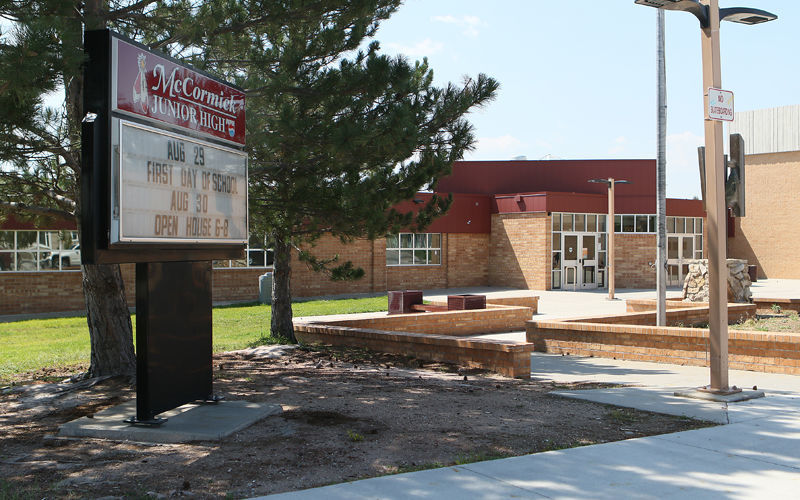 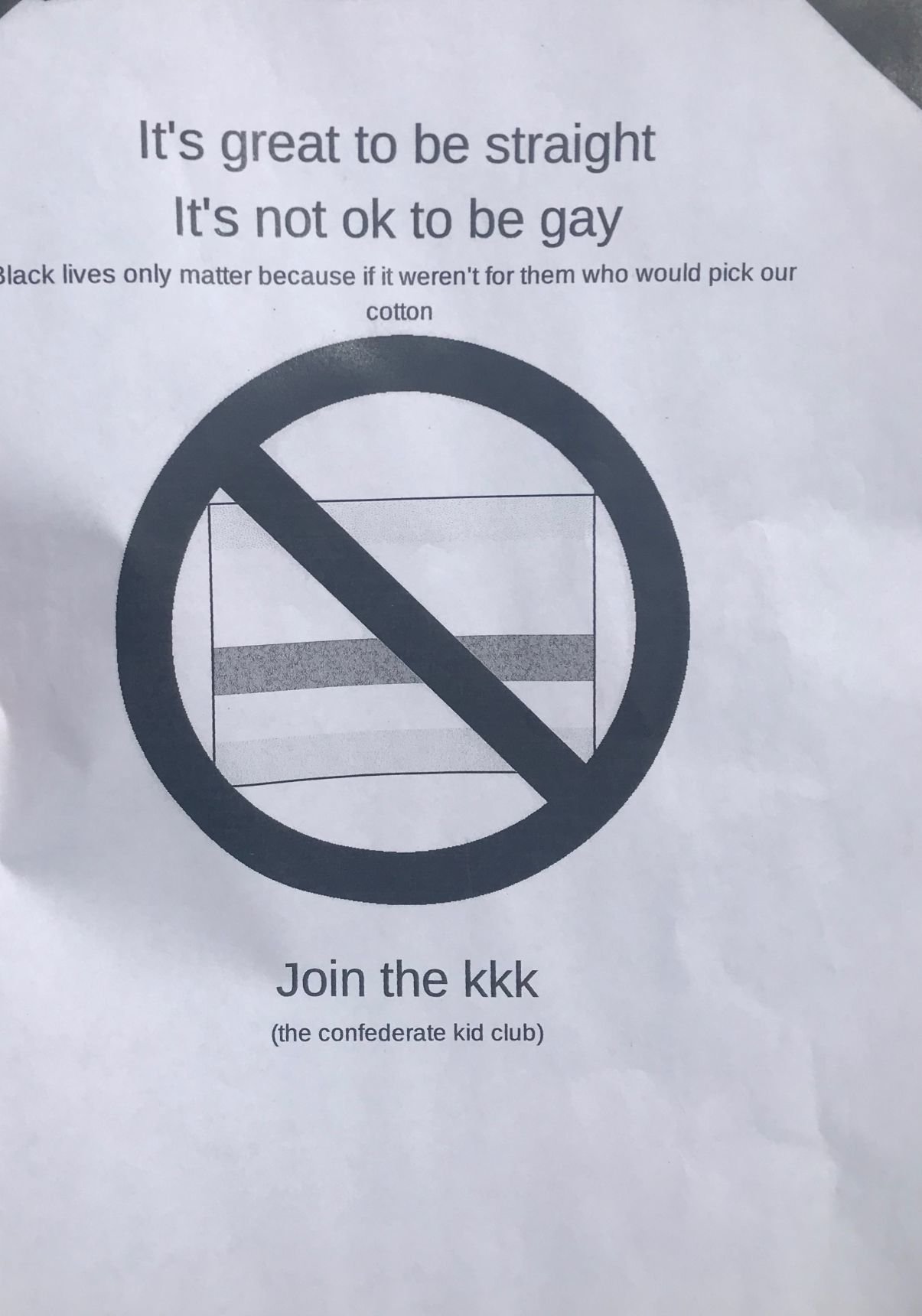 This homophobic and racist flyer was found posted at Cheyenne’s McCormick Junior High on March 27, 2019. Courtesy

This homophobic and racist flyer was found posted at Cheyenne’s McCormick Junior High on March 27, 2019. Courtesy

CHEYENNE – Flyers reading “it’s great to be straight it’s not OK to be gay,” “black lives only matter because if it weren’t for them who would pick our cotton,” and “Join the KKK,” with “the confederate kid club” in parentheses beneath it were taped to walls and passed out by students during the day Wednesday at McCormick Junior High School.

It’s the most recent event in a chain of bullying of McCormick’s Gay Straight Alliance students, according to a teacher at the school.

Principal Jeff Conine told the Wyoming Tribune Eagle there were only two flyers, and that they were taped to a wall in an area without security cameras. He said teachers found the flyers and took them down before the school day began.

But at least three other, independent reports claim the walls of the school were papered with the flyers, and that students with Confederate flags were passing out the flyers to targeted students in the GSA club at the school.

In a meeting Wednesday afternoon, Conine told Wyoming Equality Executive Director Sara Burlingame he was not aware that students had passed out any flyers, Burlingame said. However, on a call earlier in the day, prior to Conine’s interview with the WTE, Cheyenne Mayor Marian Orr had told Conine that students had been handing out flyers, Orr said.

In a follow-up interview with the WTE, Conine said he was still trying to determine whether students had been handing out flyers, and that he had yet to confirm if that were true.

Burlingame said Conine also confirmed a student shouted the word “faggot” at GSA students during their meeting Wednesday, and that the student who yelled the slur was scolded by Conine.

Conine said he could not speak about incidents involving students who are underage, and declined to confirm that report.

He said the day’s events were still under investigation and couldn’t say what the repercussions would be for those responsible until they were found. The most severe punishment he is authorized as principal to deliver is a 10-day out-of-school suspension.

Conine said he believes this was an isolated incident.

“I don’t believe this is a prevailing sentiment that exists in the school,” he said.

McCormick’s GSA club has roughly 40 students, and the club’s co-sponsor, Kaycee Cook, who is a substitute teacher at the school, said nearly all of those students have reported bullying this year.

When she got to school Wednesday, another teacher handed her one of the flyers. Cook then went to the GSA meeting, where students confirmed the incident with the flyers.

“They said the flyers were all over the school,” she said.

Wednesday’s events were only the latest in a series of events, Cook said. The past few weeks have been particularly severe.

“I have kids who don’t attend GSA anymore because they’re bullied for being members,” she said.

Cook said she reported the bullying to district administrators three weeks ago. She was told the incidents did not fall under their purview, and they dismissed the claims. She also said Conine had been informed of the bullying, and that Wednesday’s events were not isolated.

GSA students also have reported bullying from some McCormick teachers who refuse to use students’ preferred pronouns and have called same-sex students holding hands (which is allowed by school policy) “disgusting,” Cook said.

No teachers were named specifically, and Conine could not be reached to answer additional questions by the time of publication.

LCSD1 Superintendent Boyd Brown said Wednesday was the first he had heard of any such events at McCormick. He said such incidents would be handled by the building administrator – in this case, Conine.

Brown said at this time the district office is not involved in responding to Wednesday’s events.

When Burlingame met with Conine at the end of the school day Wednesday to address the flyers, she said she was glad Conine was willing to have a dialogue, and that he agreed LGBTQ and black students should feel safe at McCormick. She said she did have some frustrations with the meeting, however.

“Unfortunately, I think Principal Conine wants to minimize the incident and not see it as a part of a larger trend,” she said. “I don’t think vulnerable students have that same privilege.”

Burlingame said minimizing the incident would only make things worse.

“We know it just doesn’t work to ignore them and hope they go away,” she said.

She said she hopes the school makes it clear to LGBTQ and black students that they are safe. She suggested to Conine that an email and physical letters should be sent to parents and students explaining the incident and reaffirming the school’s commitment to the safety of all students.

Conine told the WTE he had taken that suggestion under advisement, but had not yet made a decision on whether to move forward with it.

Burlingame also suggested training be given that addresses bullying and harassment of targeted student groups like LGBTQ students and students of color. She said this is where Conine balked, saying the school already had anti-bullying training programs, namely the Olweus Bullying Prevention Program.

Wyoming Equality GSA coordinator Ammon Medina said he was most concerned about the targeted students getting the support they need, particularly because marginalized students tend not to feel that support.

Data from the U.S. Department of Education reports that of all bullying or harassment incidents reported during the 2015-16 school year, 23 percent were racially motivated, and 16 percent were based on sexual orientation.

But data suggest the number of reported incidents doesn’t even scratch the surface.

In 2017, GLSEN (Gay, Lesbian and Straight Education Network), an organization that advocates for safe schools, conducted a survey of 23,001 students across all 50 states.

That survey found more than 70 percent of LGBTQ students experienced verbal harassment at school based on sexual orientation.

More than 55 percent of those students did not report the incident to school staff, “most commonly because they doubted that effective intervention would occur or feared the situation could become worse if reported.”

More than 60 percent of the students who did report an incident said school staff did nothing or told the student to ignore it.

This is not the first time hateful sentiments have been expressed in the area. There have been white nationalist banners and flags hung in Cheyenne and Laramie in recent months.

In August, a Nazi Germany flag was hung in Laramie’s Washington Park.

Orr said she believes Cheyenne is an “extremely tolerant” city, so it is important for the city to come together and stand against hatred. But she also said there weren’t specific measures needed to address the issue, citing “a few bad apples” responsible for the hate speech and white nationalism.

She said she would be opposed to banning any free speech. In regard to the incidents at McCormick, she said it was a benign incident, but not something to be taken lightly, particularly in the shadow of recent hate crimes committed in other parts of the country.

This story has been updated from a previous version with newly reported information.

Morgan Hughes is the Wyoming Tribune Eagle’s education reporter. She can be reached at mhughes@wyomingnews.com or 307-633-3181. Follow her on Twitter at @morganhwrites.

Morgan Hughes is the Wyoming Tribune Eagle’s education reporter. She can be reached at mhughes@wyomingnews.com or 307-633-3181. Follow her on Twitter at @morganhwrites.