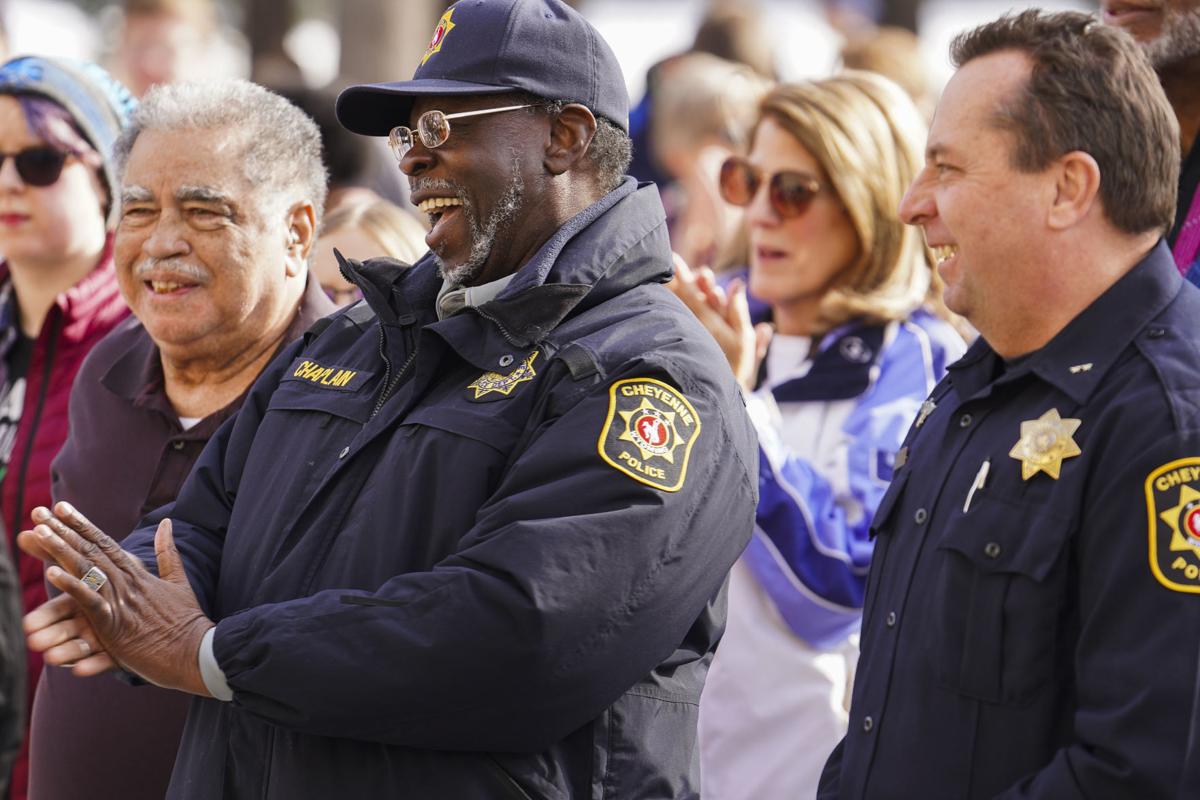 The Rev. Dr. Hilton McClendon Sr., center, claps during a ceremony in remembrance of the Rev. Dr. Martin Luther King Jr. on Monday, Jan. 20, 2020, in Cheyenne. Marchers started at the Cheyenne Depot and made their way to the Capitol for the ceremony and speeches. Nadav Soroker/Wyoming Tribune Eagle 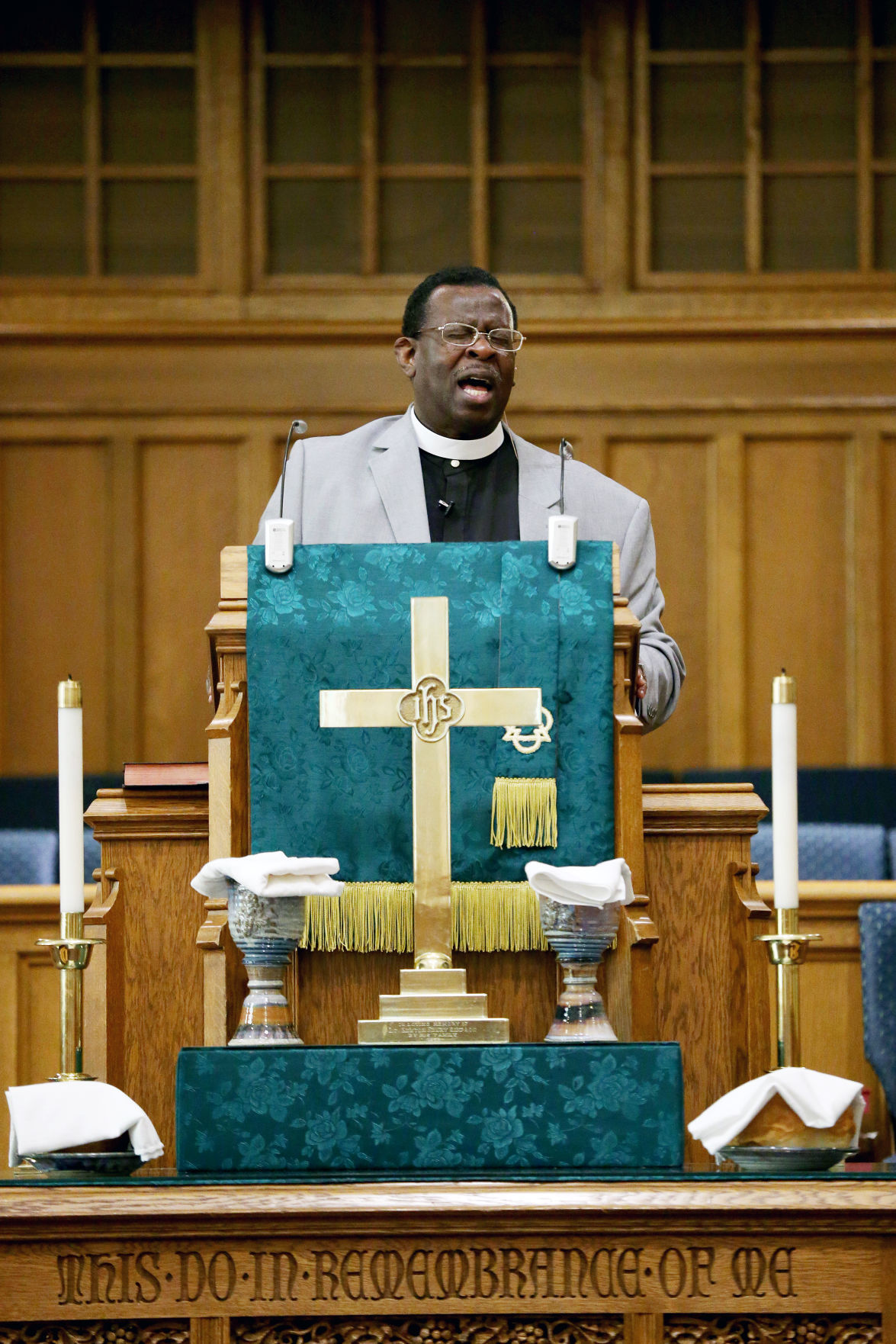 The Rev. Dr. Hilton J. McClendon Sr., pastor for God’s Love and Hope Fellowship Church, speaks during a prayer service to call for healing in the world Saturday, Aug. 24, 2019, inside the First United Methodist Church in downtown Cheyenne. Clergy from across town came together for the service to speak out against the recent rise in mass shootings and hate crimes, and to mark 400 years since the first enslaved African was brought to a European colony in North America. Michael Cummo/Wyoming Tribune Eagle

The Rev. Dr. Hilton McClendon Sr., center, claps during a ceremony in remembrance of the Rev. Dr. Martin Luther King Jr. on Monday, Jan. 20, 2020, in Cheyenne. Marchers started at the Cheyenne Depot and made their way to the Capitol for the ceremony and speeches. Nadav Soroker/Wyoming Tribune Eagle

The Rev. Dr. Hilton J. McClendon Sr., pastor for God’s Love and Hope Fellowship Church, speaks during a prayer service to call for healing in the world Saturday, Aug. 24, 2019, inside the First United Methodist Church in downtown Cheyenne. Clergy from across town came together for the service to speak out against the recent rise in mass shootings and hate crimes, and to mark 400 years since the first enslaved African was brought to a European colony in North America. Michael Cummo/Wyoming Tribune Eagle

CHEYENNE – The Rev. Dr. Hilton McClendon Sr. was just a child when the Denver church he grew up attending was burned by the Ku Klux Klan.

“In 1967, the KKK had burnt ‘KKK’ in the yard and blew off half the church,” McClendon said. “I know, in reality, what it is to see hatred and racism … some people talk about what they’ve heard, but I’m talking about what I’ve seen. I’ve seen racism as a child coming up in the ’60s, and what has happened is it has become more subtle.”

McClendon is the pastor at God’s Love and Hope Fellowship Church, is a Cheyenne Police Department chaplain and is the president of United Christian Ministers Alliance of Cheyenne. The organization is currently trying to bring the community together after the recent Black Lives Matter protests seeking justice for George Floyd, Breonna Taylor and Ahmaud Arbery – three Black individuals recently killed by police.

McClendon and the Rev. Bill Novak, associate pastor at First United Methodist Church, have joined forces to create a series of discussion-based, anti-racist events the weekend of July 10 (as well as more in the works for later in the summer) aiming to unite all corners of the community via a value Christianity preaches in all denominations: love.

The July 10 event will begin with a dinner for local clergy, law enforcement and various community leaders, and include a talk led by civil rights leader Rev. Acen Phillips, who might give a larger public talk, as well, but Novak said they’re watching the COVID-19 numbers before making a decision.

McClendon and Novak were brought together when McClendon returned to Cheyenne a couple years ago after preaching in Montana, Novak’s home state. McClendon had returned to his former pastoral home – he preached in Wyoming’s capital city when he was just 19 years old – to start a new church, and he needed a space to work before the church was up and running. The senior pastor at First United Methodist, the Rev. Mark Marston, offered his sanctuary.

“We got to know each other, and we became friends,” Novak said of McClendon. “A couple weeks ago, I woke up in the middle of the night so worried about our country, in despair, kind of, and I said, ‘I think God put Hilton in front of us for a reason.’”

That’s when he knew they had to do something. Novak said he leans more conservative, while McClendon is more liberal, but he was determined to look beyond the way differing beliefs on social issues have become part of a larger ideological battle in the United States.

He cited the example of the recent death of Rayshard Brooks, a 27-year-old Black man shot by an Atlanta police officer after trying to flee during an attempted drunken-driving arrest. Novak said he sees that event as a police officer doing his job, but McClendon doesn’t agree.

“We see things differently, and I want to hear his point of view because I’m a child of God, and we both share a love of Jesus and our neighbor, so we can have these difficult conversations,” Novak said. “I don’t need my side to be right. I don’t need to win the argument. I can listen.”

McClendon agrees. When he became a pastor, he said, he took an oath to share the love of God with everyone around him, regardless of who they are. It’s that same love that drove him to eventually become friends with a member of a small-town Montana church who once told him “we don’t have N-words as pastors in our organization.”

“This is what I said to him: ‘First thing, I love you, my brother. I love you with the blood of Christ,’” McClendon recalled saying to the man. “‘And my job is to preach the Bible. But first of all, to love you. So I accept your opinion of what you say, but I love you.’”

McClendon’s approach to anti-racist activism is the same love-based, nonviolent philosophy Martin Luther King Jr. is known for – an approach he said is not as common currently. McClendon recalls being physically beaten during several demonstrations he was a part of in his youth, but he never fought back, which was the response he learned from protests and other acts of civil disobedience that King led.

The current generation of protestors, he said, in contrast, don’t have the same mindset – and he cited the chaos in Minneapolis after Floyd’s death as an example. That’s why he and other members of the United Christian Ministers Alliance of Cheyenne are planning a meeting with young organizers to help them see his perspective.

“That’s what our job is here. We want to have prevention and stop [violent acts such as looting] before it even gets started,” McClendon said. “We’re going to sit down and tell them because they don’t know where we’ve come from, they only see what’s happening now. They don’t know the roots of this whole thing ... the stuff that went on in the ’60s – they have no idea what we went through.”

McClendon said he’s happy with the peaceful protests that have taken place in Cheyenne this month, but he wants to utilize communication to get ahead of any potential future issues. That’s why he called Cheyenne Police Chief Brian Kozak shortly after the Minneapolis protests started spreading to other states to share the alliance’s concerns.

“We need to know in this area what the culture of our police department is and what things they do,” he recalled saying to Kozak. “With no hesitation, he sat down with us as pastors … I applaud our chief because he has a good culture among the police department here, and they don’t hesitate in firing.”

Education is key to fighting racism, McClendon said, so he plans to continue this conversation, from more private to public discussions (Saturday’s “Changing the Narrative: Listening to Marginalized Voices” forum at Element Church was co-sponsored by his alliance).

Novak sees these local conversations as the best way for religious leaders to combat racism.

“I can’t do much about the nation or our leadership, but I can focus on how we can be Christian brothers and sisters to each other, no matter what we think about politics,” he said. “We’re so used to 140 characters on Twitter now, and that’s all public, and you say things you’d never say to someone face to face. It’s just ‘how do I score points for my tribe?,’ and tribalism throughout history has always ended in terrible violence.”

“We have to, as leaders from our pulpits, say racism is wrong,” he said. “We’re not going to accept it, we love everyone … If every rose was red, we’d have a problem. We need yellow roses, pink roses. If we look at God and his creation, he didn’t make everything the same. Everything he created, there was a difference, and that difference brings about a wholeness.”

Several religious leaders in the United Christian Ministers Alliance of Cheyenne are uniting against racism through both private and public discussions and future events.

A former priest weighs in

Charlie Hardy, a priest in Wyoming for 19 years, marched for civil rights and protested American foreign policy and military policy throughout his life.

He detailed his experiences over the phone – especially as a religious leader who learned about foreign policy when he served as a priest in South America – and said he's hopeful that the protests he's currently seeing will make a difference.

"Even in Cheyenne, there are young, black leaders who, just as Martin Luther King, are becoming leaders for all the oppressed people. I have my hope that the same thing will happen, we're going to see black leaders emerge that maybe we haven't seen before ... and we're seeing it. Even in the halls of Congress, people of color who are seeing things from a whole different perspective."