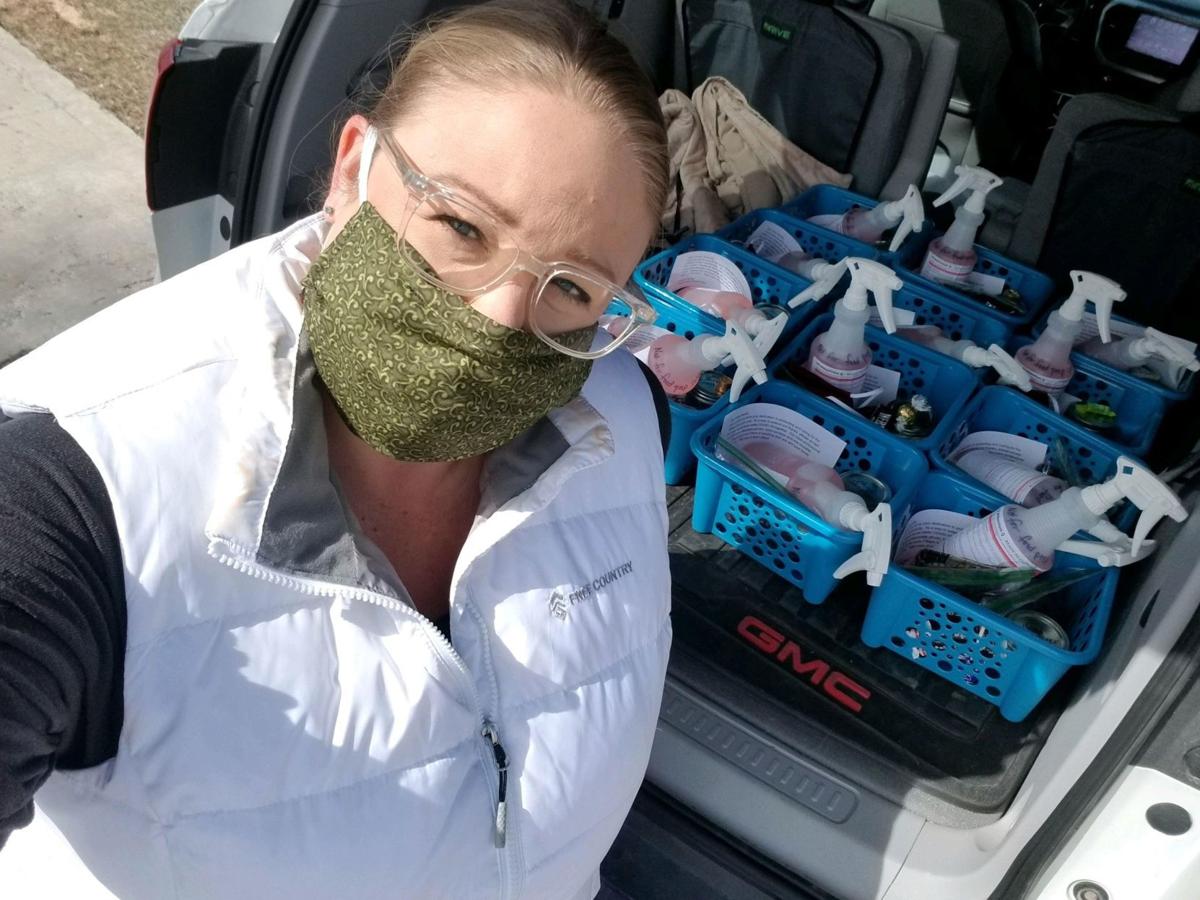 Cassie Torres, a foster care coordinator in Evanston for the Department of Family Services, gets ready to distribute hand sanitizer, cleaning spray and other supplies for her clients. Amid the pandemic, state officials are preparing for programmatic cuts and possible layoffs to make up for the state’s historic decline in revenue. DFS/courtesy 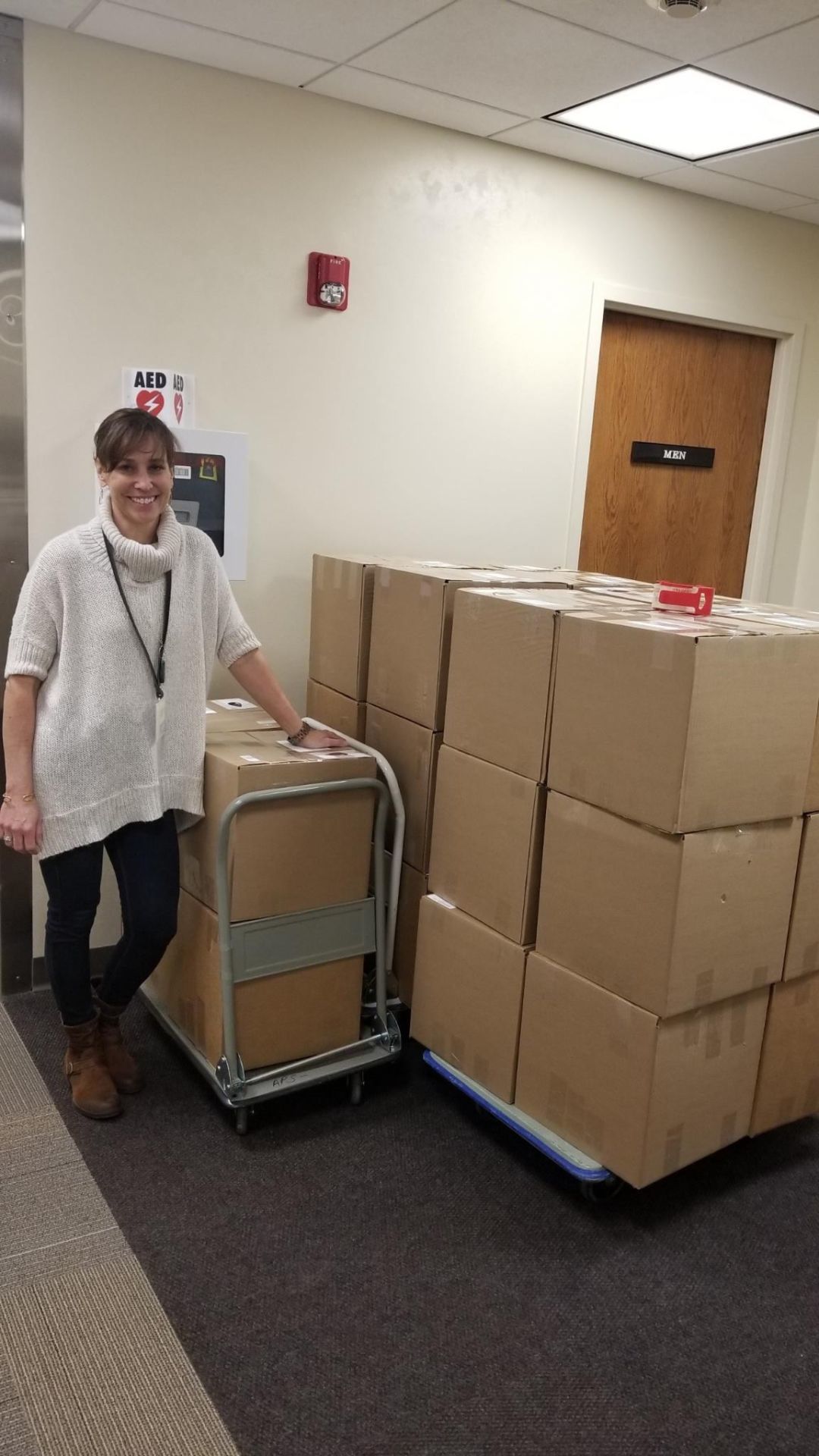 Department of Family Services Director Korin Schmidt stands with boxes of personal protection equipment before they were shipped out to the field offices statewide. DFS/courtesy

Cassie Torres, a foster care coordinator in Evanston for the Department of Family Services, gets ready to distribute hand sanitizer, cleaning spray and other supplies for her clients. Amid the pandemic, state officials are preparing for programmatic cuts and possible layoffs to make up for the state’s historic decline in revenue. DFS/courtesy

Department of Family Services Director Korin Schmidt stands with boxes of personal protection equipment before they were shipped out to the field offices statewide. DFS/courtesy

CHEYENNE – The Wyoming Department of Family Services has a presence in every county in the state.

Charged with handling child support services, food assistance programs and more, the department has 28 field offices across the state to respond to the needs of children and families.

But with the state facing a projected $1.5 billion revenue shortfall over the next two years, DFS Director Korin Schmidt – like every agency director – has been forced to weigh some tough decisions, including the possibility of closing some field offices that serve the state’s most vulnerable.

“We don’t have plans to close any offices now, but we also don’t know how long this is going to last,” Schmidt said in an interview Friday. “If we do have to close an office, how do we continue to best serve the families that we need to see and that need to see us?”

Earlier this month, facing the largest decline in revenue in state history, Gov. Mark Gordon directed state agencies to prepare for a 20% cut to Wyoming’s budget for the upcoming biennium, with initial proposals due July 1.

Wyoming, which was already facing a massive revenue deficit prior to the COVID-19 pandemic, has seen its underlying issues amplified by the economic fallout brought by the virus. In the state’s general fund alone, the revenue shortfall is projected at $877 million – a number roughly equivalent to the Department of Health’s entire budget, or to the state’s entire payroll.

“There will be layoffs,” Gordon said during the news conference in early June. “There will be potentially furloughs and other things that occur. This isn’t easy.”

While the first round of reductions is set for next month, the most painful cuts may not come until a second round later this year. The phased approach will allow state leaders to have a better idea of how much, if at all, the state’s economy has recovered before taking drastic steps.

Schmidt said her department’s first proposal focuses on scaling back existing programs, rather than reducing staff, but she added that could change in the months to come.

“Does that (second phase) involve layoffs? I think everything is part of the package that we’re looking at,” Schmidt said. “We’ve made no decisions about that next phase yet, but ... the second one is going to have to be a really serious conversation about what services are eliminated from our package.”

The most recent time that state leaders were forced to cut budgets mid-year was 2016, when former Gov. Matt Mead cut roughly $250 million from the state budget, resulting in 700 layoffs of private-sector employees.

Though both predicaments partially stemmed from swift downturns in energy production, House Speaker Steve Harshman, R-Casper, said the current dynamics are “probably three times worse, maybe more” than those of 2016.

While the governor will have the ultimate authority on which cuts to make, Harshman said some substantial cuts could come from the state Department of Health, which comprises a third of the state’s general fund spending.

“These are really devastating cuts to the most vulnerable, because that’s where the money’s at,” Harshman said. “It’s in health and family services. That’s what government does: provide those services to those needy and disabled and vulnerable populations.”

Lawmakers have previously looked at combining the two departments, but those efforts have stalled. Sen. Eli Bebout, R-Riverton, who helps oversee the budget as co-chair of the Joint Appropriations Committee, was hesitant to the idea of combining two of the state’s largest agencies.

“There’s economies of scale, and sometimes too big is just not too good,” Bebout said. “We looked at that one, but there may be others we could combine.”

While those broader discussions may not happen until next year, lawmakers are considering a special session for mid-July, after opting against convening for one this month. It would be legislators’ second special session of the year, following a partially virtual one in May that was focused on distributing federal relief funds.

Yet some lawmakers worry that the state’s stimulus money – $1.25 billion that must be spent by the end of the year – isn’t being used fast enough. Harshman noted the state needs to spend a weekly average of $45 million to burn through the funding, which cannot be used to supplement lost revenue.

Bebout said a wide range of areas – health care, rural hospitals, broadband expansion – could be covered by the federal money.

“One of the concerns I have is that all of a sudden it’s going to be October, and we have not gotten in the process of getting that money out,” Bebout said. “I’m not sure the money is getting out as quickly as it could be, and maybe we need to have a special session to talk about that as well.”

When the relief money came through, the governor’s office asked every state agency to submit proposals on how they might be able spend the money. The DFS proposal looked at expanding the department’s child-care provider system, as well as ways to allow case workers to meet virtually with clients. Schmidt said her department is awaiting a response from the governor’s office.

“They’re going through each of the requests and vetting those and ensuring they meet the U.S. Treasury guidance, so we don’t get the state into a situation later where we’re having to pay back anything,” Schmidt said.

“If we need to help speed it up with direct appropriations, we can gather quickly for a really focused session,” Harshman said. “We got to get this money out to our communities and our people.”

Yet while those federal funds could cover some urgent needs during the pandemic, they won’t do much to help agency workloads, which were already strained by the 2016 cuts.

Schmidt said her DFS caseworkers currently handle an average of 16 to 20 cases at any given time. Asking her staffers to take on more than 20 simultaneous cases, she said, would put children at risk of not having proper representation.

“As (caseworker) vacancies have become available, we’ve been analyzing those and making a determination of, ‘Where could the work be spread out among current staff, versus where do we need to keep staff because the work just won’t be able to continue?’” Schmidt said.

Gordon’s initial cuts are expected to be released in early July. Schmidt said the coming months represent “a defining moment for Wyoming,” and lawmakers hoped the crisis wouldn’t be overshadowed by the ongoing pandemic.

“I’m not sure that with all the COVID stuff going on and all the small businesses trying to keep their doors open ... I’m not sure a lot of people are really tuned into the severity of what we’re talking about,” Bebout said.

Facing the largest decline in revenue in Wyoming's history, state agencies have begun to prepare drastic cuts to their budgets, with layoffs appearing likely. Gov. Mark Gordon is expected to announce an initial round of cuts in early July.