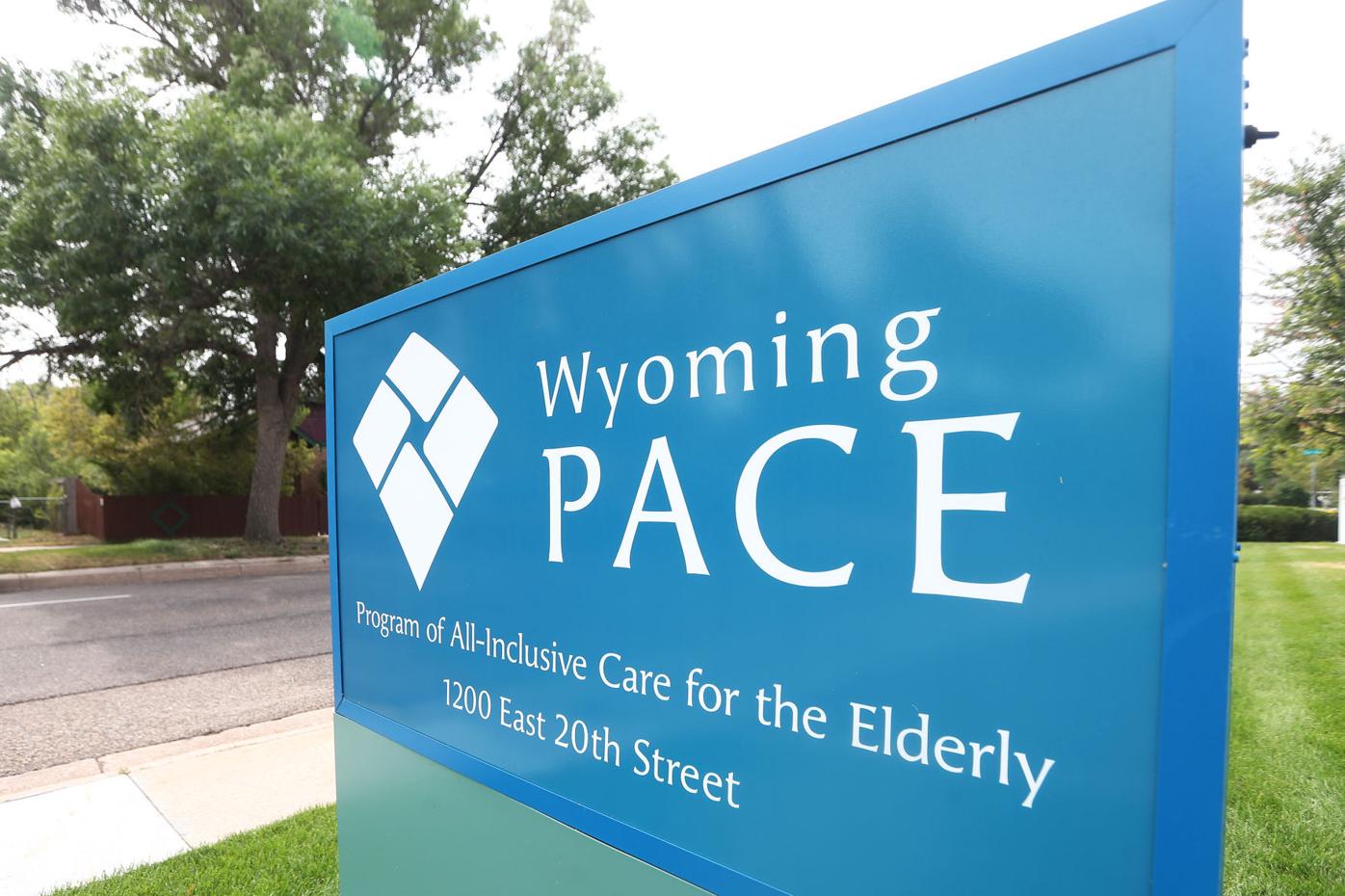 The sign outside the Wyoming Program of All-Inclusive Care for the Elderly (Wyoming PACE) is seen Friday, Aug. 28, 2020, in Cheyenne. Wyoming PACE is set to be phased out over the next six months due to state budget cuts. Michael Cummo/Wyoming Tribune Eagle 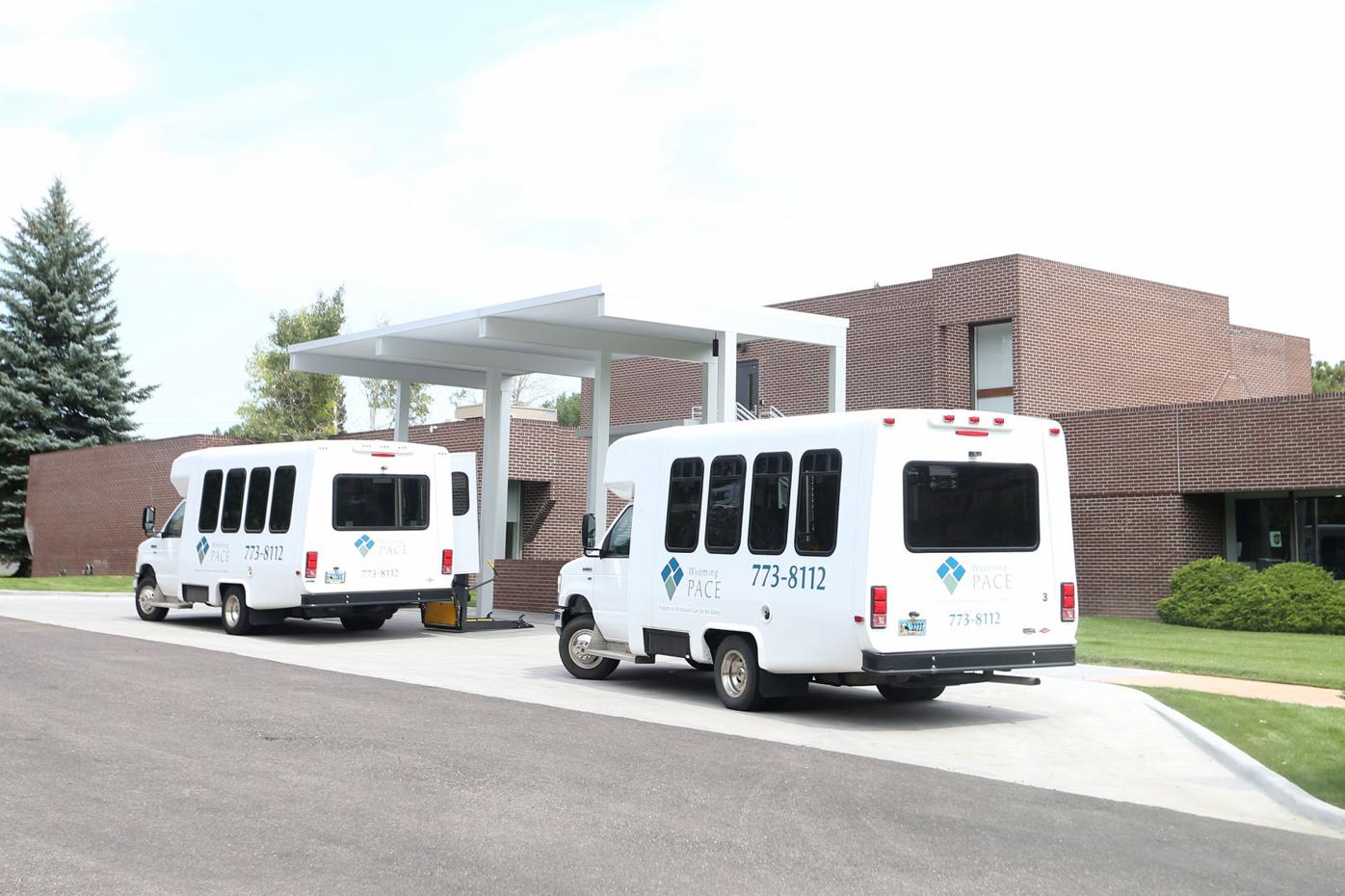 Buses sit parked outside the Wyoming Program of All-Inclusive Care for the Elderly (Wyoming PACE) on Friday, Aug. 28, 2020, in Cheyenne. Wyoming PACE is set to be phased out over the next six months due to state budget cuts. Michael Cummo/Wyoming Tribune Eagle

The sign outside the Wyoming Program of All-Inclusive Care for the Elderly (Wyoming PACE) is seen Friday, Aug. 28, 2020, in Cheyenne. Wyoming PACE is set to be phased out over the next six months due to state budget cuts. Michael Cummo/Wyoming Tribune Eagle

Buses sit parked outside the Wyoming Program of All-Inclusive Care for the Elderly (Wyoming PACE) on Friday, Aug. 28, 2020, in Cheyenne. Wyoming PACE is set to be phased out over the next six months due to state budget cuts. Michael Cummo/Wyoming Tribune Eagle

CHEYENNE – For seniors like Jerry Sergerson, Wyoming PACE has been a lot more than just a health care program.

“It’s a lot of love and care, and PACE is my family until the good Lord takes me home,” Sergerson, who lost his wife prior to joining the program, said in a 2017 video. “I like my independence, and they give me that independence.”

Sergerson, who passed away in 2018, has been one of more than 200 seniors who have participated in Wyoming PACE, or Program of All-Inclusive Care for the Elderly, which provides wide-ranging assistance to Laramie County residents seeking an alternative to long-term care placement.

But soon, as a result of the budget cuts announced Wednesday by Gov. Mark Gordon, the program operated by Cheyenne Regional Medical Center will be eliminated.

With the program set to phase out over the next six months, the 139 active PACE participants will be without the easy access to services afforded by CRMC staff from the facility in downtown Cheyenne.

“So many pieces of the PACE program exist on an individual basis through Medicaid and other services that are available, but the coordination of all those services is the really challenging piece,” CRMC CEO Tim Thornell said Friday. “We may be able to piece together some components of what PACE looks like, but replicating in its totality ... will be near impossible without the program itself.”

At first, the demand for the program, which began in 2013, was a bit of a surprise to CRMC officials. PACE clinical director Rebecca Carey said initial projections expected the program to max out with 62 participants over three years.

To qualify for PACE, residents had to be 55 or older, living in Laramie County and in need of a higher level of care. Upon enrollment, PACE participants did not have to pay any sort of copays or deductibles.

“The benefit of PACE is we’ve been providing services that aren’t traditionally covered in other programs – things like transportation, vision, dental, hearing and home-delivered meals – things that generally aren’t covered,” PACE intake coordinate Alicia MacArthur said. “So these are folks that weren’t getting those services or would have had to privately pay or couldn’t afford it.”

The program, which was altered amid the COVID-19 pandemic to allow staff to make in-home visits, will continue temporarily until CRMC figures out its transition plan, MacArthur said. PACE participants were expected to be informed of the program’s elimination Friday.

The future of the newly renovated PACE facility, which was just opened last year at a cost of roughly $4 million, is also in flux.

“We had architects who had built PACE buildings throughout the country design and build this for us, so we have not yet had the opportunity to think about how this building might be repurposed for something else,” Thornell said.

The elimination of PACE, which will save about $2 million in the state’s general fund budget, is one of several cuts to the Wyoming Department of Health, which had its budget reduced by about $89 million.

Thornell said many of the eliminated programs are like PACE “in that they take care of some of our most vulnerable patients in our community.”

“It’ll be tough for our community to absorb some of these losses, and the reality is that the safety net upon which they rely won’t be there for every situation,” Thornell said.

The loss of PACE will also be felt squarely by the nursing staff, who Carey said are inspired by their work every day. She recalled a PACE participant who, upon taking a shower at the facility, immediately broke down in tears.

“Her home had no facility that she could shower in due to her disabilities and her poverty, so the only time she would receive a shower was once a year when it was warm enough that her family could take her out and use a garden hose,” Carey said.

“I would just hope that, as a community, we find a way to service that level of need and bring people the care that they need and meet them where they are.”

Wyoming PACE will soon be eliminated as a result of the state budget cuts announced earlier this week, leaving its 139 participants without the easy access to a wide range of services afforded by the CRMC-based program.