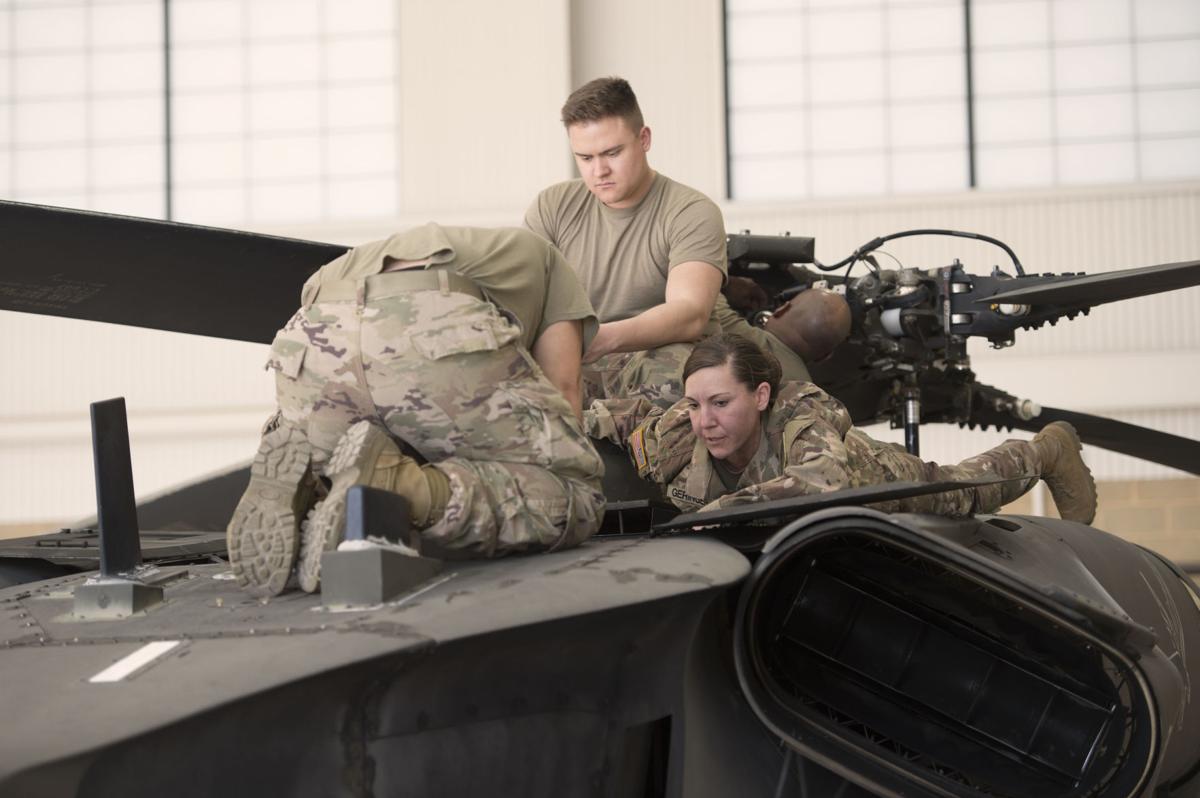 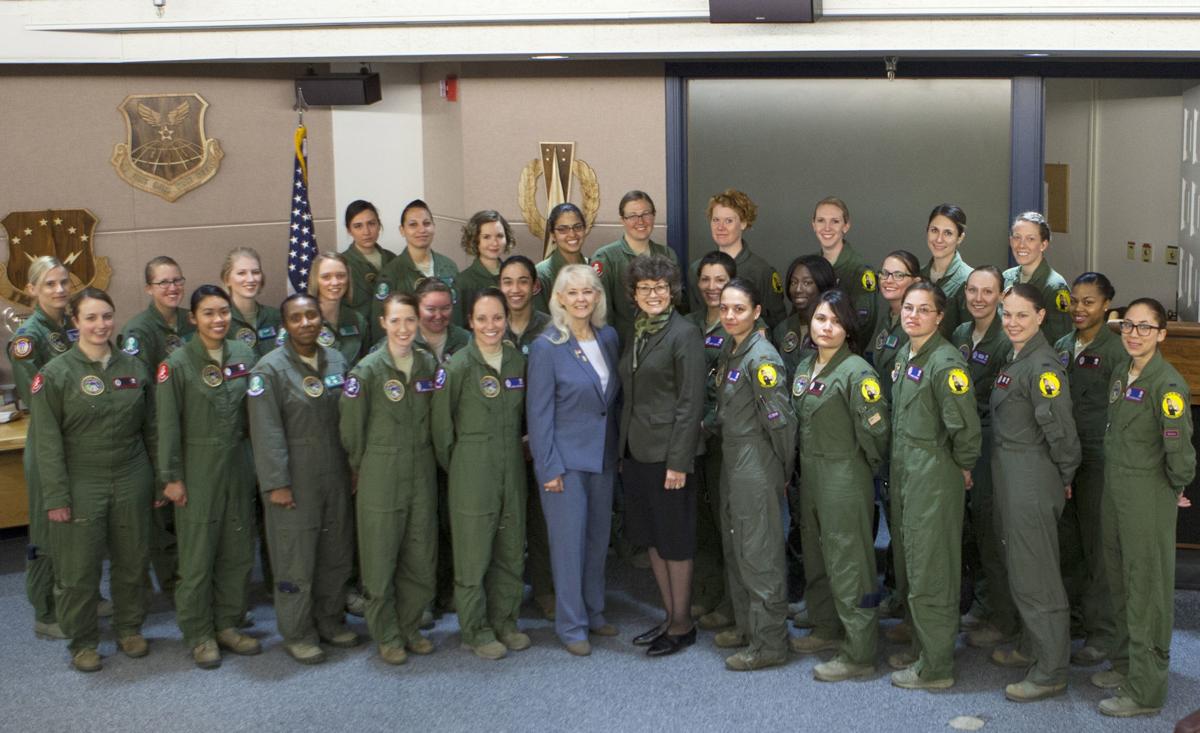 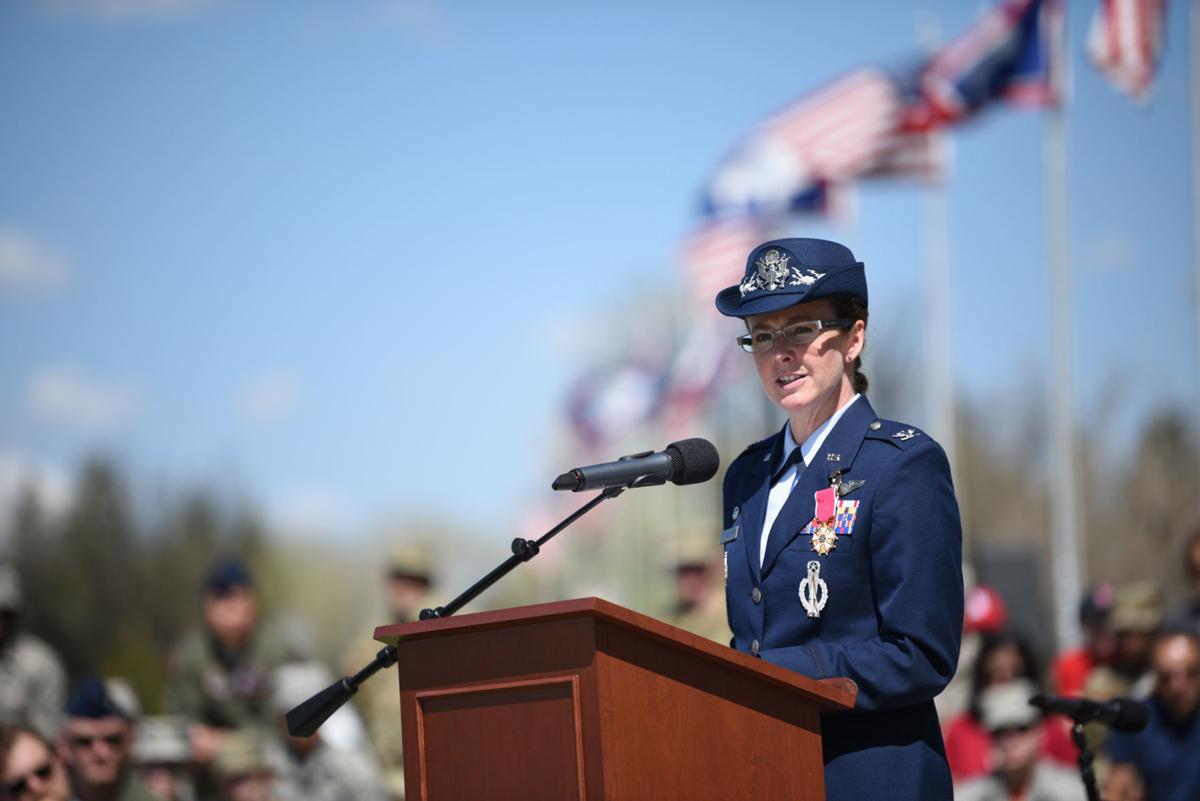 Col. Stacy Jo Huser, 90th Missile Wing outgoing commander, gives her speech during the change-of-command ceremony on the Argonne Parade Field at F.E. Warren Air Force Base on May 31, 2019. Huser thanked the 90th Missile Wing for supporting her through her command, giving special thanks to her husband and children for their support at home. (U.S. Air Force photo by Staff Sgt. Ashley N. Sokolov) 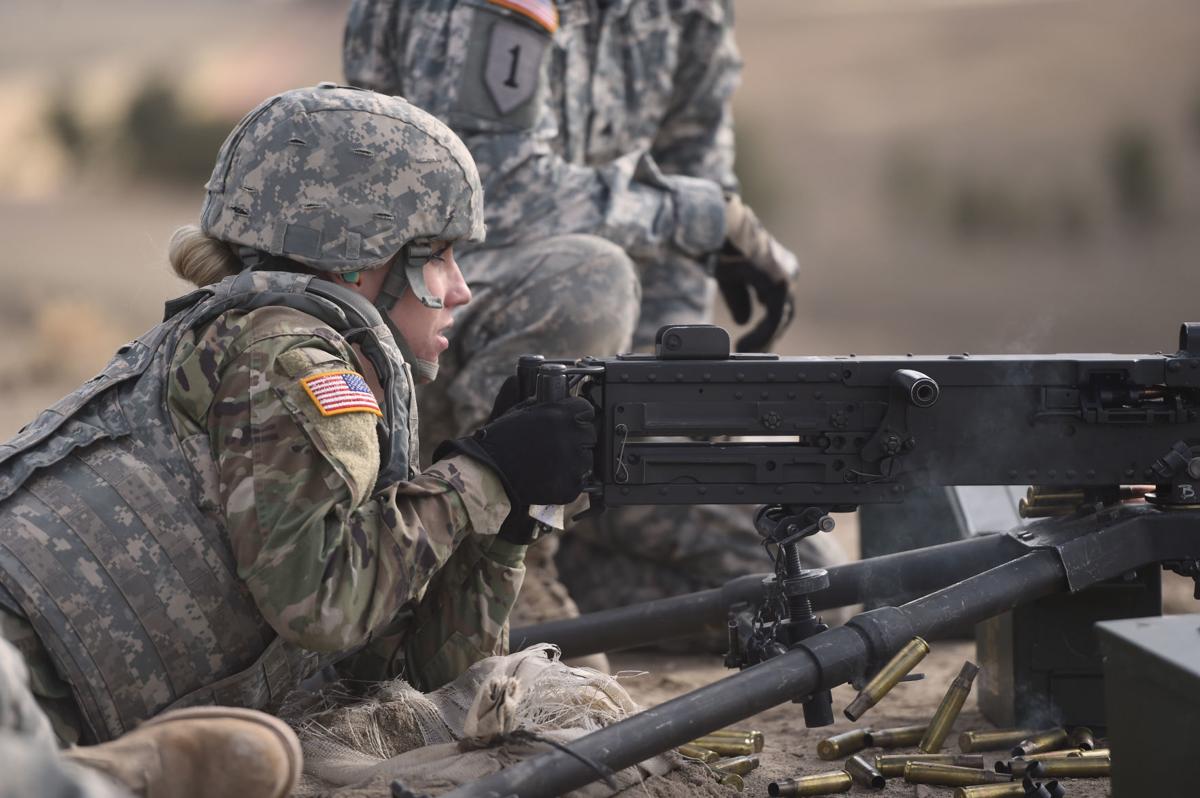 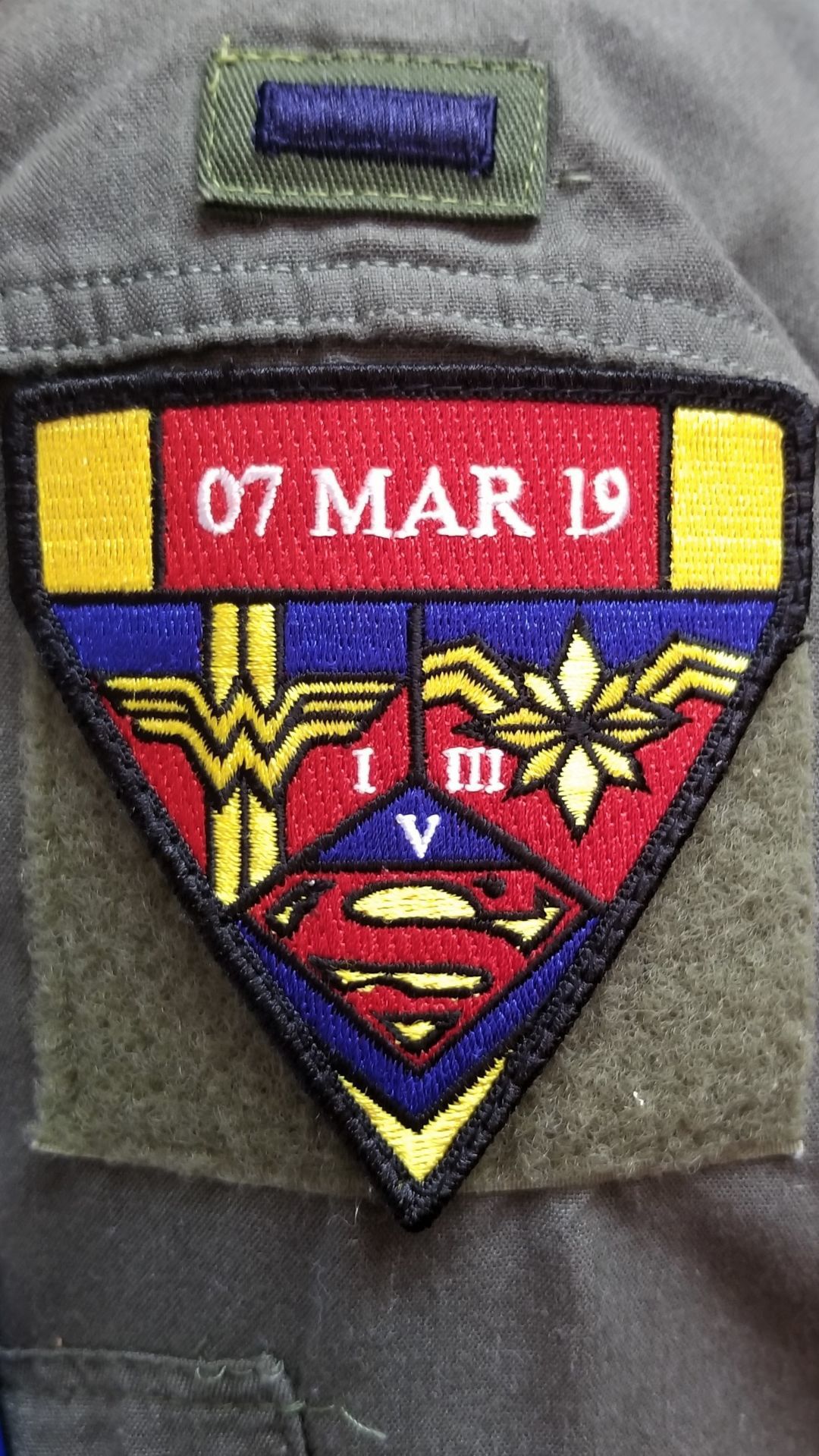 A morale patch designed for the all-female alert missileers at F.E. Warren Air Force Base is pictured March 7, 2019. The patch depicts the logos of famous comic book superheroes – Wonder Woman, Captain Marvel and Superwoman. The 90th Missile Wing participated in an all-female alert during Women’s History Month in March. For 24 hours, female crews operated all ICBM silos across the United States. (Courtesy photo)

Col. Stacy Jo Huser, 90th Missile Wing outgoing commander, gives her speech during the change-of-command ceremony on the Argonne Parade Field at F.E. Warren Air Force Base on May 31, 2019. Huser thanked the 90th Missile Wing for supporting her through her command, giving special thanks to her husband and children for their support at home. (U.S. Air Force photo by Staff Sgt. Ashley N. Sokolov)

A morale patch designed for the all-female alert missileers at F.E. Warren Air Force Base is pictured March 7, 2019. The patch depicts the logos of famous comic book superheroes – Wonder Woman, Captain Marvel and Superwoman. The 90th Missile Wing participated in an all-female alert during Women’s History Month in March. For 24 hours, female crews operated all ICBM silos across the United States. (Courtesy photo)

From scrubbing the laundry to serving as commanding officers, the role of women in the military has changed significantly in the years since the dawn of women’s suffrage in Wyoming,

Today’s military women are part of a fighting force that sees women serving in more jobs than ever before, and taking on deployment and combat positions that would have been unheard of 150 years ago.

United States Air Force Tech. Sgt. Ashley Ishmon is a woman who has served for more than 13 years at six duty stations. But her assignment to F.E. Warren Air Force Base was the first time she experienced having a female in the top leadership position with Col. Stacy Huser.

“Being here at this base was my first ever experience having a female as a wing commander,” Ishmon said. “She was amazing. That was just awesome to see. I’ve seen women as chiefs, but to see an actual woman leading the base was pretty impressive.”

Ishmon is a defense paralegal who works as an Area Defense Counsel, a military attorney who represents any airman accused of a crime or facing some other action by the Air Force. She joined the military to further her education, and throughout her time in the Air Force, she has earned two associate’s degrees, as well as a bachelor degree in criminal justice and a Master of Business Administration. She is currently working on her doctorate degree in psychology, with an emphasis in industrial and organizational psychology.

She said people may be surprised at all the different positions women serve in at F.E. Warren.

“Simply coming through the gate and to see a women standing there with a weapon – that may surprise them,” she said. She added she wants to highlight the fact that women are serving on the base just like men.

During her time in the military, Ishmon has seen a growth in women serving in leadership roles, and she expects that trend to continue.

“I definitely see more women in command as we progress on,” she said.

Kyle Brislan, a historian with the 90th Missile Wing at F.E. Warren, said women first were authorized to enlist or commission in the Air Force in 1976. Before then, they were part of the women’s auxiliary groups instead. Brislan said initially their roles in the Air Force were limited, and they could not fly combat missions or work missile alert. By 1978, some of those limitations were lifted, and by 1991, Congress allowed women to fly combat missions, he said.

“In today’s Air Force, women serve alongside men in a variety of roles, ranging from pilot to missileer to security forces,” Brislan said in an email. “Their legacy is celebrated annually here at F.E. Warren AFB, as the base’s female missile crew members conduct an all-female alert once per year to honor the history of those heroines who challenged social and cultural conventions to improve gender equality.”

Maj. Lara Taylor of the Wyoming Army National Guard has been in the military for 20 years, but it is within the last decade that she has seen some noticeable changes in the jobs of women in the military.

Taylor said two major changes she has seen in her time in the military include women being allowed into combat arms roles and the Army Combat Fitness Test (ACFT) gearing up to be non-gender specific in terms of passing requirements. She said making the fitness test the same for everyone isn’t fully integrated yet, but it soon will be.

“It allows us to be on an equal playing field with our male counterparts when it comes to physical aspects of our jobs,” she said.

Another change Taylor has seen is how the military handles family time. When Taylor first joined the military, she was in the Naval Reserves for five years. She said during that time she was barred from going to school to become an officer due to a pregnancy. While she did get maternity leave, none of her male counterparts received any time off when their children were born. Now, in her current job, she just signed off on paternity leave for one of her male soldiers whose wife had a baby, she said.

“A plus for the military is they understood how important family is, and they have put a better focus on that throughout my career,” she said.

Taylor remembers being a brand new second lieutenant who was straight out of school, and she deployed with a field artillery battalion who had not had women in their ranks before. Taylor said she was very welcomed into the group and knew there was no question that she was able to do the job she was expected to do.

“It was a very good experience,” she said. “They taught me a lot, and they showed me a lot. They kickstarted my career to where I am today.”

She currently serves as the officer in charge of the 94th Troop Command, and as she looks to the future for women in the service, she sees the military moving toward basing jobs on capability, not gender.

“If an individual is fully capable, both mentally and physically, of doing a position or a job in the military, it’s not going to be questioned anymore whether they’re male or female,” Taylor said. “It’s just going to be 'Can you do the job?'”

Overview of women in the military

According to Wyoming historian John Woodward, who is the director of the Wyoming Veterans Memorial Museum in Casper, 150 years ago, the role of women in the military was much different than it is now. Women served as civilian employees, rather than as members of the military, and they served in roles such as laundresses who washed and mended uniforms. They also would have served as nurses and cooks, he said.

Though women didn’t officially serve in combat roles until 2016, after the Pentagon opened all combat positions to women, Woodward said throughout United States history, women have disguised themselves as men and fought in wars.

“There are no statistics of how many took this path, but there are examples in almost every major conflict of women masquerading as men in order to serve,” he said.

In a list of highlights of the role of women in the military, Woodward said women contributed more and more as time went on.

The government established the U.S. Army Nursing Corps in 1901 and the U.S. Navy Nursing Corps in 1908, and women moved beyond civilian employment and into an official codified capacity with the military. The advent of World War I saw women beginning to contribute more, including serving as clerks, yeoman and telephone operators, Woodward said.

“They saw women being able to fill non-combat personnel roles that would free up men for combat roles,” he said.

As World War I drew to a close and women’s enlistments ran out, women’s role in the military remained relatively unchanged until the second world war, Woodward said.

“That’s when you saw the greatest expansion for places for women in the military,” he said. He mentioned the formation of women’s reserve or auxiliary services, including the Women’s Army Corps and the Women Accepted for Volunteer Emergency Service, which was the women’s branch of the Naval Reserve during World War II.

“Probably the biggest and most substantive change that these women’s reserve service groups implemented occurred in 1948, when President Harry Truman signed the Women’s Armed Services Integration Act,” Woodward said. “This officially codified a place for women in America’s armed forces.”

Women served in the U.S. military in Korea and Vietnam, and in 1976, the first women were admitted to the armed forces services academies, graduating with the class of 1980, Woodward said. He added that by the end of the 1970s, the Navy began integrating female sailors and Marines on non-combat vessels.

In 1991, Congress authorized women to be able to fly combat missions and serve on combat naval vessels, with the exception of submarines.

The first three women completed Army Ranger School in 1995, and the Department of Defense opened all combat roles to women in 2016.

A Wyoming National Guard solder, Sgt. Shelby Atkins, had the distinction of being the first female non-commissioned officer to complete a U.S. Army infantry qualifying course.

“At this point, all roles within the military are open to women,” Woodward said. “There are physical requirements for different positions, but there are no longer any barriers in regulation or status to women serving in any capacity. Women are a big part of our military, and are going to be contributing as veterans for decades to come.”

Elizabeth Sampson is a freelance journalist living in Cheyenne who has more than 12 years of experience. She can be reached by email at esampson78@gmail.com.