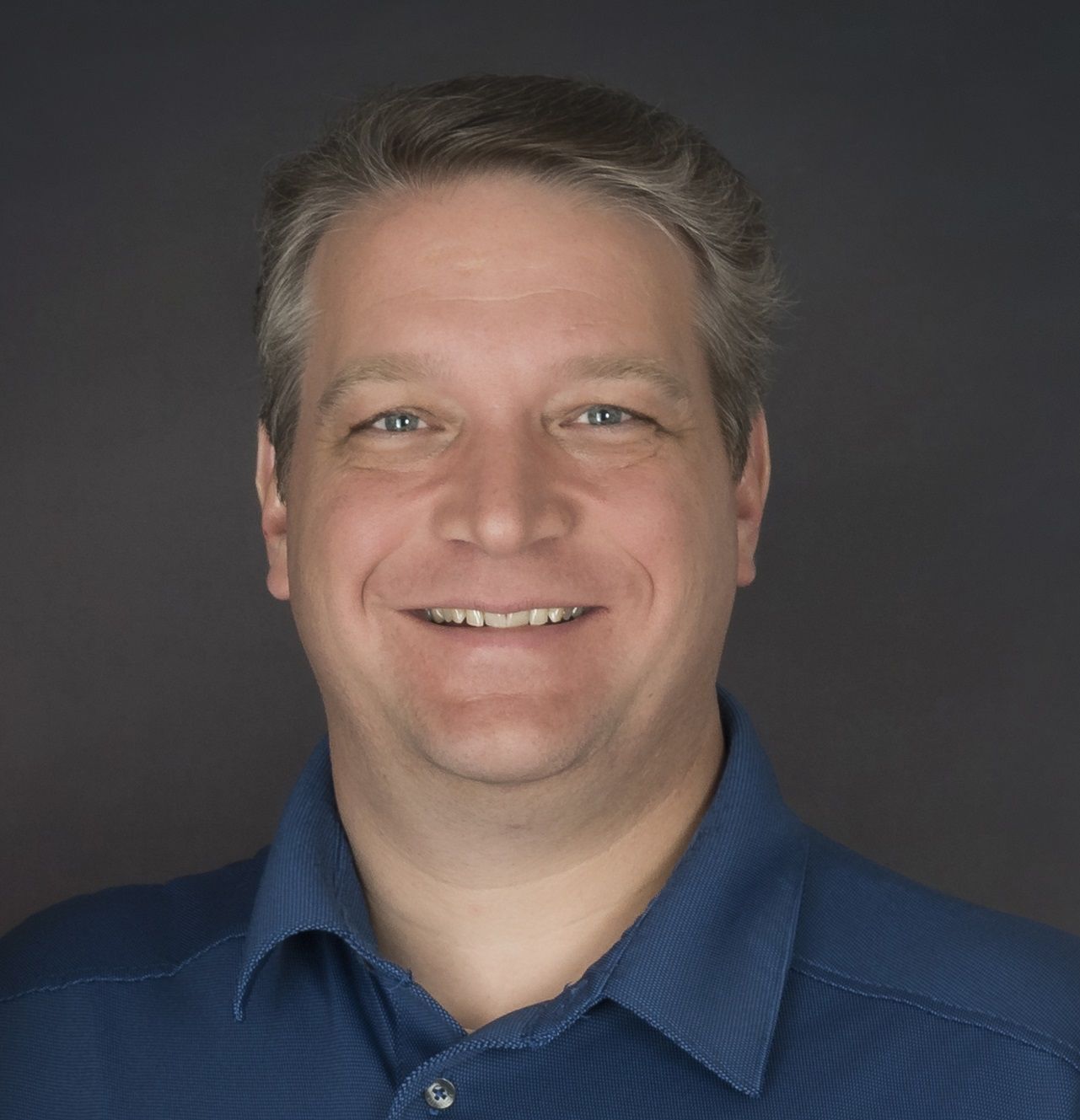 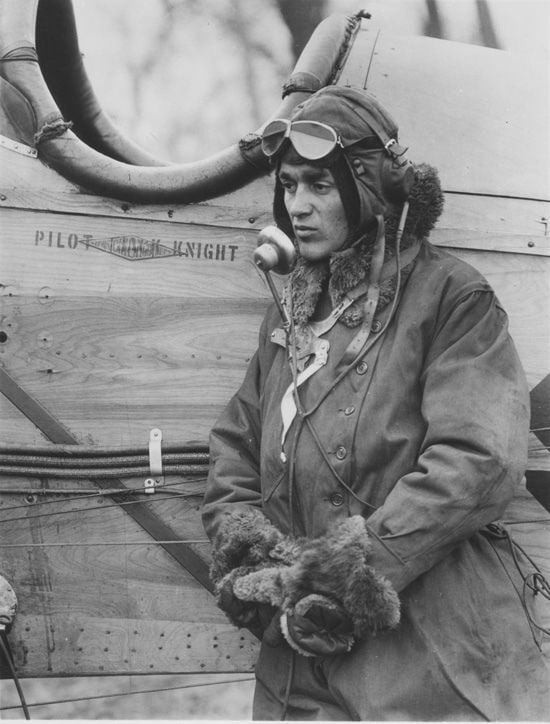 Jack Knight is pictured leaning against his plane in this image from the San Diego Air and Space Museum Archive. Courtesy 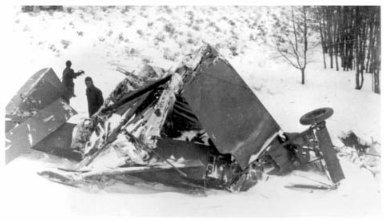 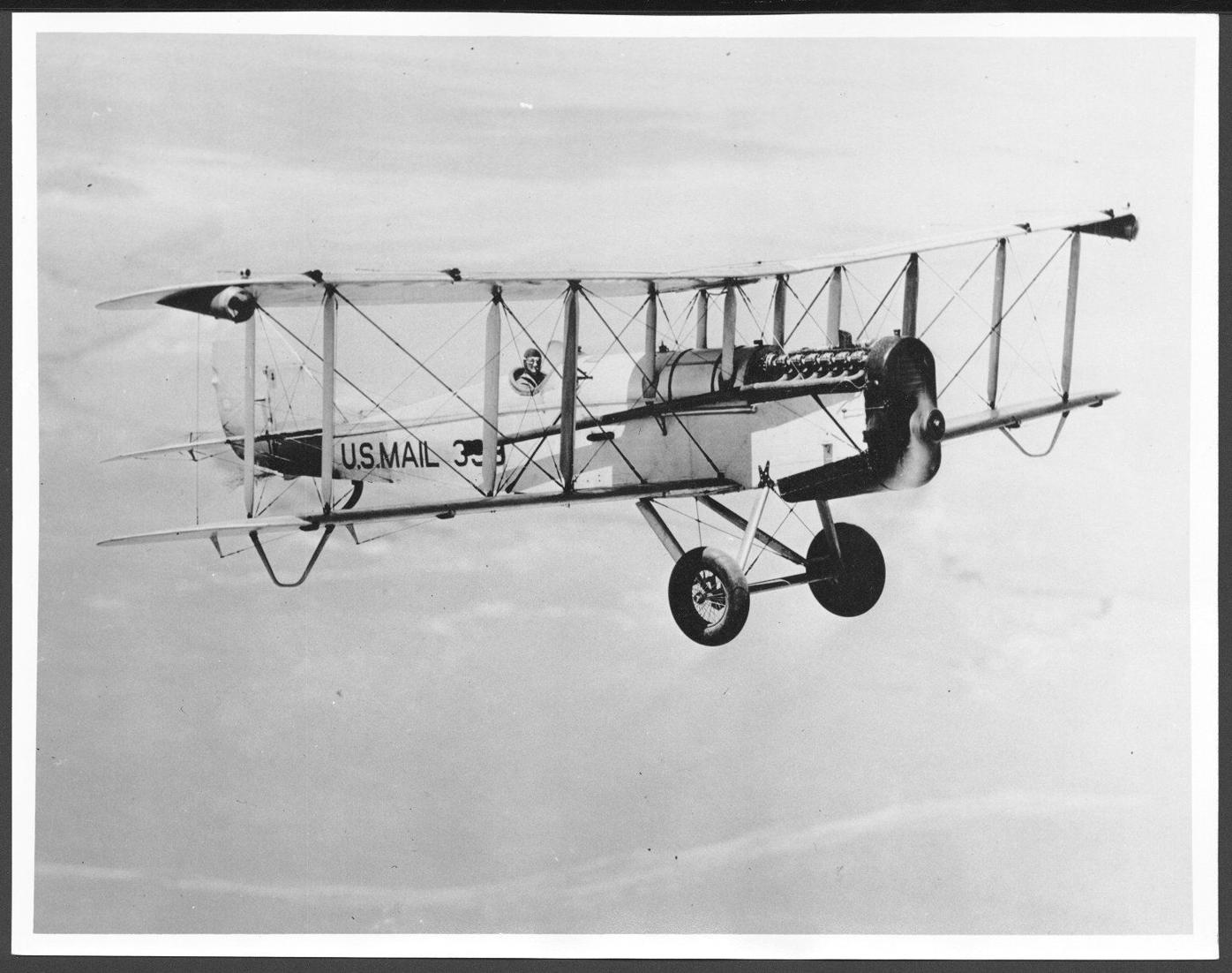 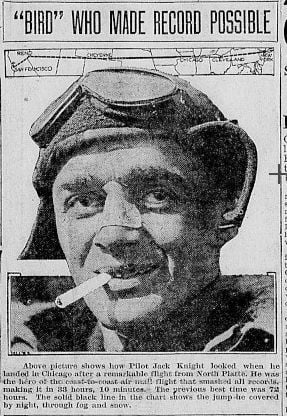 Wyoming was a dangerous place that demanded the best from the air mail pilots who flew over it. Bad weather, high altitude and difficult terrain made it difficult even for the best of them. The challenges our state presented to them were only made worse by unreliable equipment that could fail suddenly at any time.

By February of 1921, several airmail pilots had already lost their lives through accident, engine failure, crashes or even having their plane catch fire in mid-air. Risk was a known part of the job, and it required nerves of steel to brave the odds.

One Cheyenne pilot, Jack Knight, came to define daring and fortitude of those who flew the air mail. Upon taking up his station here, he braved the Wyoming skies many times, often in the face of brutal western headwinds, which forced him to return to Cheyenne before making it as far as Laramie before he ran out of gas.

On the early morning of Feb. 16, 1921, at about 6 a.m., Knight took to the skies, again heading west toward Salt Lake City. The westerly winds were not quite as bad as he had faced before, and the day was clear, with some broken clouds. It promised to be a normal day. He had flown the route many times, and did not follow the railroad tracks that guided earlier pilots.

Leaving the rails near Buford, he struck west toward Telephone Canyon, which he would follow down to the Laramie Valley and beyond. As he approached the canyon, however, his engine began to sputter. Struggling to get his plane over the high ridge of the canyon, his plane suddenly took a dive and hit a snow bank just below the crest. Jack’s head struck the instrument panel in front of him, and he lost consciousness.

Jack regained consciousness at around 9 a.m., lying amid the wreckage of his aircraft at the bottom of the canyon. Relatively unhurt, he walked five miles to a ranch owned by Will Wallis, who brought the downed pilot to Laramie for medical treatment around 11 a.m.

With his face full of gashes and his nose broken, Knight was patched up in time for him to get lunch at the Conner Hotel and catch the noon train back to Cheyenne. Instead of resting, as his doctor ordered, Knight reported to the mail airfield upon his return, and by 3:55 p.m., flew over the skies of Laramie that afternoon to finish his interrupted journey – with a new plane and different mail. When postal officials reached the crash site the next day, they found that only the engine and the mail were salvageable. All wondered how Knight had survived. That Jack Knight was tough was beyond repute, and the U.S. Air Mail Service needed such men.

Under pressure from Congress over the cost of running the service, and the high number of accidents, the administrators of the air mail needed to prove its value. About the time of Jack’s misadventures in Wyoming, they hatched a plan to fly 600 pounds of mail from both San Francisco and New York in a relay flight that would span the country. Flights would not stop even after the sun went down, making this the first attempt to fly air mail – or any aircraft, for that matter – across the continent at night.

The date for their demonstration was Feb. 21. No lights were in place to allow these pilots to fly the route at night. Instead, they would follow the rails. Expecting a clear night, the reflection of the moon off the rail surfaces would guide them. Additionally, bonfires would be lit by ranchers and other volunteers along the way so pilots could see the direction they were to go. By the morning of Feb. 21, everything was ready, and the air mail pilots began their attempt.

The plan was soon in trouble as a massive snowstorm enveloped the eastern part of the U.S. By the time the westbound mail had reached Chicago, the weather was so bad that the pilots refused to continue.

The eastbound mail had trouble, too. One plane crashed near Elko, Nevada, killing its pilot. Undaunted, the mail was recovered and another pilot continued eastward, making up time and even getting ahead of schedule by the time he reached Cheyenne. Frank Yager then took the mail at 4:57 p.m. from Cheyenne to North Platte, Nebraska, where the intrepid Jack Knight waited to carry it east to Omaha.

Knight’s own leg of the flight didn’t start off well, as ground crews struggled to fix a broken tail skid on his plane. He wasn’t able to leave the ground until 10:45 p.m., but he knew the route to Omaha well, and the bonfires were still burning along the way.

Knight was a couple hours behind schedule when he landed at Omaha at 12:55 a.m., and he was startled to hear that his relief pilot from Chicago had not arrived due to the worsening storm. Realizing that the westbound mail was already canceled and the whole project was in jeopardy, Jack Knight made a fateful decision. He volunteered to take the mail the rest of the way to Chicago.

People in Omaha tried to convince Knight it was hopeless. Bad weather and the inky darkness between Omaha and Chicago made flying seem impossible, and worse, he had never flown that route before. Undaunted, Knight took a road map of the office wall, climbed into his plane and flew into unknown and foreboding skies at 1:59 am.

The weather was horrible, with swirling snow and strong winds on the way to his next destination, Des Moines. Guided by compass, dead-reckoning and occasional glimpses of the ground, Knight flew on, struggling to control his plane and snatching quick glances of the map by flashlight. He spied the gleaming lights reflecting off the dome of the Iowa capitol in Des Moines, but snow proved too deep for a safe landing.

Knight continued toward his next landing site as he watched the needle of his fuel gauge swing ominously toward empty. As the bonfires had long since gone out, he followed a railroad track to Iowa City. Once there, he gunned his engine upon arrival to awaken people below to send him a signal. A red flare identified the airfield, and he landed with less than 20 minutes of fuel to spare. Met by the lone watchman who remained at the airfield, the rest having given up on any chance for success, Knight refueled his plane and took off again.

The night proved starry and clear from that point on. The dawn remained clear, and Knight knew he was getting close to Chicago by the smoke from the city.

As he approached Checkerboard Field, his engine began to sputter after a hard night’s work. Nonetheless, Knight touched his tired plane on the runway at 8:40 am.

When his plane stopped, he was greeted by an ecstatic throng who had turned out to see if the valiant pilot would make it. In an instant, Jack Knight’s name flashed across the wires and into the headlines of the nation’s newspapers. He was a national hero, and his effort saved the U.S. Air Mail service. The mail he carried continued its journey without him, finally reaching New York 33 hours and 20 minutes after it had left San Francisco. Jack had conquered the night and flown a total of 675 miles in darkness, 425 of them over land he had never flown across before.

Jack returned to Cheyenne on Feb. 27 in a brand-new mail plane. Greeted by another welcoming crowd, Knight climbed down from his plane, shook a few hands and was then guided off by his wife to get some “eats.”

Over his shoulder, he shouted back to the well-wishers “…I’m here to tell you, that you get an appetite when you are kicking along way up there!”

He was the most famous pilot in America and would remain so until a feat by another air mail pilot, Charles Lindbergh, would eclipse his accomplishment.