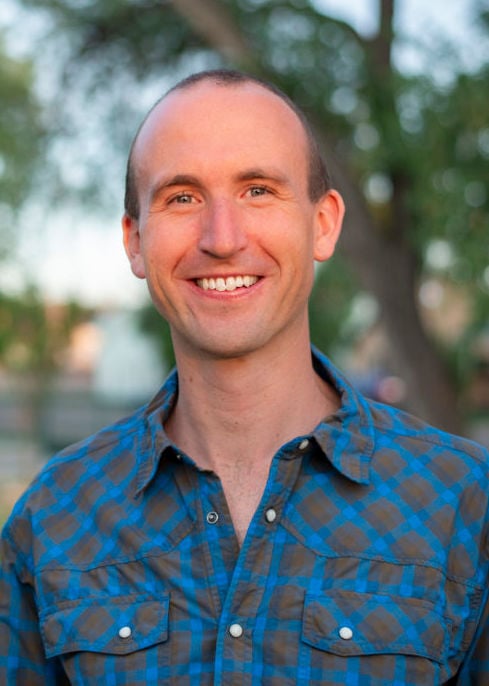 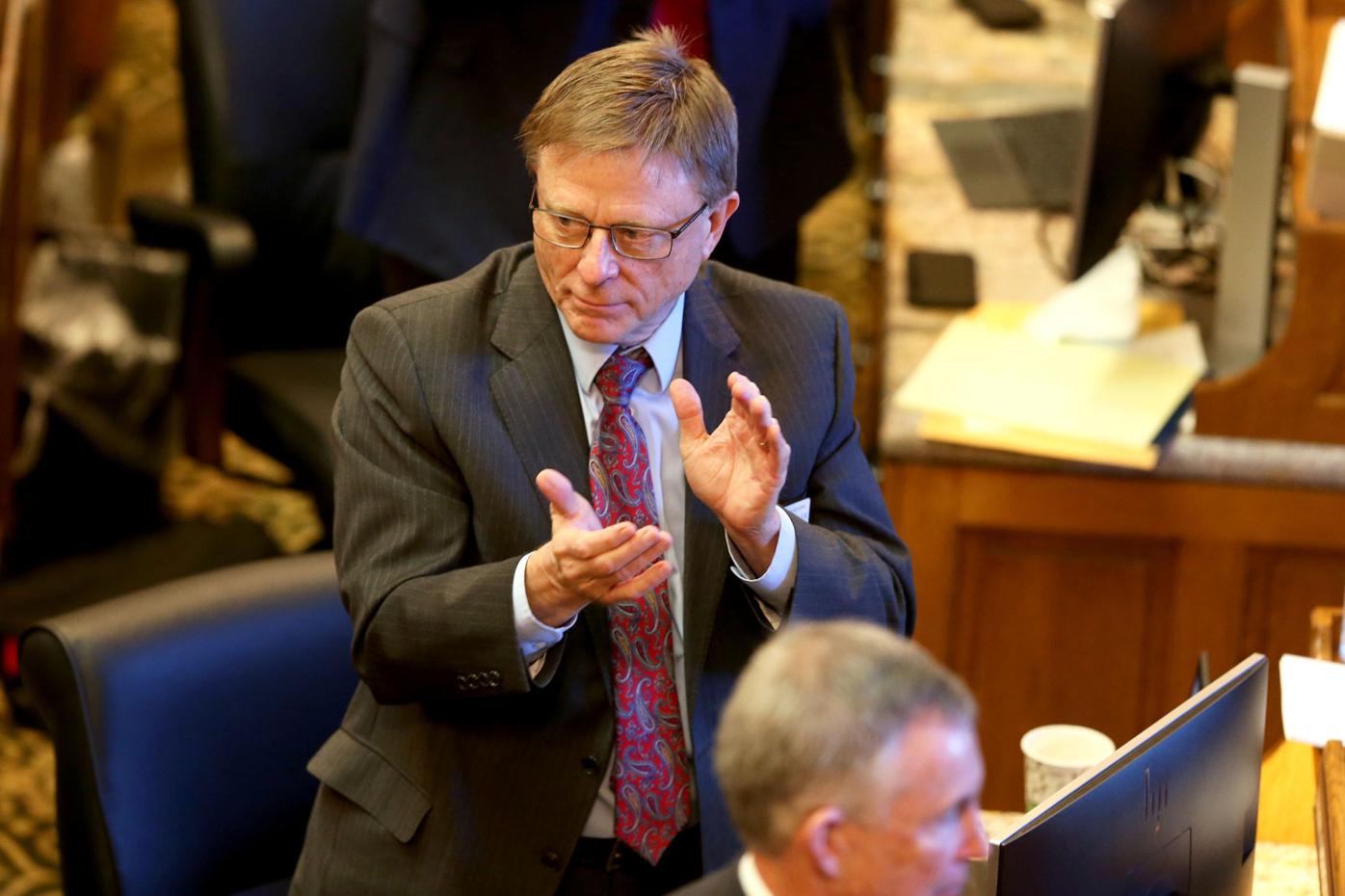 Rep. Jerry Obermueller, R-Casper, stands and claps during the first day of the 66th Wyoming Legislature’s in-person general session Monday, March 1, 2021, inside the state Capitol. The session, which the majority of legislators are attending in person, will run through Friday, April 2. Michael Cummo/Wyoming Tribune Eagle

Rep. Jerry Obermueller, R-Casper, stands and claps during the first day of the 66th Wyoming Legislature’s in-person general session Monday, March 1, 2021, inside the state Capitol. The session, which the majority of legislators are attending in person, will run through Friday, April 2. Michael Cummo/Wyoming Tribune Eagle

Throughout the Wyoming Capitol, our state’s leaders wring their hands and lament that they simply must cut funding for critical public services like elder care, mental health and education, because we’re facing a budget crisis.

Gov. Mark Gordon even said Wyoming might soon need to start abandoning small towns because we can’t afford the street and sewer upkeep.

These types of comments acknowledge a very real and significant decrease in the mineral taxes Wyoming depends on to fund the state.

But they only show half the picture.

The other half is this: Wyoming is, in fact, a wealthy state, with billions and billions of dollars socked away in trust funds. And as lawmakers cut programs to help at-risk youth, they continue to put more and more money into savings accounts.

While last year’s CARES Act relief package prohibited states from using those funds to make up for lost tax revenue, the ARP contains no such restrictions. In fact, it’s specifically meant to help states in Wyoming’s position, so they don’t have to cut funding for programs that help struggling people in a time of real need.

Simply put, there is no urgent budget crisis in Wyoming. There are only lawmakers with ideological beliefs against “big government” who have found a convenient excuse to cut spending, no matter how much it hurts Wyoming and its people.

One lawmakers who is increasingly calling “B.S.” on claims about Wyoming’s urgent need to cut funding is Rep. Jerry Obermueller, R-Casper, a retired certified public accountant.

Obermueller frequently explains to his colleagues that Wyoming’s permanent savings and investment returns make it the envy of other states. According to the Wyoming Treasurer’s Office, the state has more than $20 billion in eight separate trusts.

In his third term, Obermueller has settled into a role that suits him well: truth-teller. He urges his colleagues to look at Wyoming’s big fiscal picture and stop talking about budget cuts as if they’re the only recourse to stave off total economic calamity.

“We’re a wealthy state, and we have to manage it properly. And we need to be frugal along the way, but we don’t want to be cheap, and we don’t want to be cruel,” he said during a recent House floor debate. “When you look at some of the things that are happening in this budget this time, you have to wonder if we aren’t just leaning a little bit toward cruelty.”

What the feds did to us

Powerful lawmakers like Senate President Dan Dockstader, R-Afton, tend to justify their proposals to slash state budgets by saying Wyoming must “live within its means.”

Given the fact of Wyoming’s immense wealth, it would seem like ending programs for at-home elder care would count as living far below our means.

This is particularly true at a time when Wyoming is receiving a huge infusion of federal funding to help it weather the economic impact of the pandemic.

Even during normal times, Wyoming’s biggest source of revenue is the federal government. According to Pew Charitable Trusts, nearly 45% of Wyoming’s revenue comes in the form of federal grants and other disbursements.

Nevertheless, lawmakers push the narrative that Wyoming is somehow abused by the federal government, rather than supported by it.

Asked by reporters last week about the impact of the federal relief funds, Senate Education Committee Chairman Charles Scott, R-Casper, said, “We’re still trying to figure out what the feds have done to us. We’re probably still in a position where we’re having to make some reductions this year.”

Yes, in Wyoming, lawmakers actually talk about reaping a huge amount of cash with disdain, as something the feds did to us.

In fact, what the American Rescue Plan does for legislators like Sen. Scott is challenge their narrative that Wyoming must immediately cut hundreds of millions of dollars from public education.

Scott has for years tried to find ways to decrease funding to Wyoming schools.

The Rescue Plan includes $312 million specifically for K-12 education, which is more than enough to offset Wyoming’s recent revenue losses.

Wyoming is not only a wealthy state, its wealth has actually grown in recent years.

At a meeting earlier this month of the House Education Committee, Obermueller pointed to an audit of Wyoming’s finances that found the state’s balance sheet is improving, even as fossil fuel tax revenues drop.

“While fighting deficits, the state of Wyoming has actually been growing in wealth,” the retired accountant said. “In the past five years, the balance sheet of Wyoming has grown by $1.5 billion.”

During the same period, he said, the state’s expenses have dropped by $500 million per year.

Instead of the current scarcity mindset, where the Legislature must cut spending at every blip in revenue, Obermueller encourages his fellow lawmakers to think differently.

“I think it’s really important that we think of ourselves as stewards of a vast wealth,” he said. “I would rather see us use those funds wisely than be in the process of trying to manage some kind of decline that we think we’re in. We need to think in terms of our state being a powerhouse investment company, and start leveraging off this wealth.”

Wyoming’s fiscal conservatism has helped it become a wealthy state. And it should be careful to ensure the financial stability of future generations – but not at the expense of the people living in Wyoming today.

“It’s their money,” Obermueller told his colleagues. “It’s not your money to stuff away for some future generations so they can grapple with how to spend it. We have to deal with our children, our lives, in a balanced way that provides for us and our future.”

“We’re currently saving $10 million a year of today’s taxpayers’ dollars to build a prison for somewhere, for sometime in the future – for residents that may not even be born yet,” he said. “We should be building elementary schools right now, for Wyoming kids, because it’s their dollars right now. Ethically, it’s their dollars.”

“Are we going to cut today’s folks, today’s seniors, the disabled, so we can save more money for the future?” Harshman asked. “Wyoming is not a poor state. We’ve been richly blessed, and we’ve got challenges. We can overcome them. And with steps that aren’t very dramatic, frankly.”

Wyoming lawmakers must balance the state’s budget and find ways to stabilize its revenues as the fossil fuel industries decline. But they have no excuse to slash funding for critical public services while hoarding money.

Obermueller said the way Wyoming handles its current dilemma will speak volumes about how the state will move into the future.

“Finding that balance – where we’re frugal, but not cheap, not cruel – will show a lot about Wyoming going forward,” he said.

Nate Martin is the executive director of Better Wyoming, a communications and advocacy hub offering fresh alternatives to the stagnant ideas that have long dominated state politics.