Circa 2016, outdated wind turbines at the Foote Creek Wind Energy Project in Arlington, Wyo. have long since replaced by newer, efficient models. 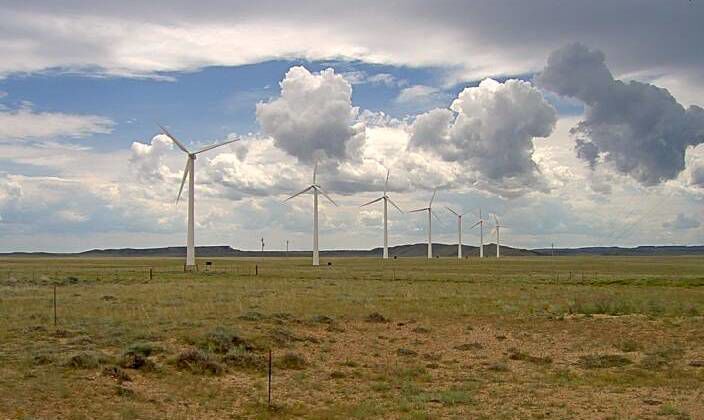 A suite of wind turbines dot the landscape near the Town of Medicine Bow.

Circa 2016, outdated wind turbines at the Foote Creek Wind Energy Project in Arlington, Wyo. have long since replaced by newer, efficient models.

A suite of wind turbines dot the landscape near the Town of Medicine Bow.

Medicine Bow — For more than a decade, power companies throughout the Western states – including Texas which has the majority of wind investments of all states — have embraced the vision that the region will become the epicenter of wind energy development.

Salt-Lake City-based Rocky Mountain Power, a division of PacifiCorp, is one of the larger companies to take advantage of the increasing groundswell of public, private and governmental interest in moving the county away from its dependence on fossil fuel power production.

Rocky Mountain Power serves 146,069 customers in Wyoming along with 978,354 in Utah and 85,581 in Idaho. The sister division of PacifiCorp, Pacific Power, serves 809,038 customers in Oregon, Washington and Northern California. In total, PacifiCorp serves 2,019,042 customers in its six-state area.

The showpiece of Vision 2020 are three new Wyoming wind farms that will provide a total of 1,150 megawatts of wind energy — or enough to power more than 150,000 homes.

Two of the wind energy projects are in Carbon County’s backyard — TB Flats and Ekola Flats — which are progressively coming online over the next several months, said Rocky Mountain Power Spokesperson David Eskelsen.

On July 30, 2018, TB Flats Wind Energy received its permits to construct and operate the project located seven miles north of the Town of Medicine Bow.

TB Flats’ 200 turbines are located on approximately 52,000 acres of private and state land in Carbon County, primarily east of State Highway 487 and along State Highway 77.

According to Chicago-based Invenergy — project contractor — when completed TB FLATS and Ekola Flats will increase Wyoming’s wind energy portfolio by 150%. Invenergy supplied the turbines for the projects.

These investments are anticipated to create between 1,100 and 1,600 construction jobs in Wyoming and more than 100 full-time positions, add approximately $120 million in tax revenue from construction, and bring post-construction annual tax revenues of $11 million in 2021 to $14 million annually by 2024.

Medicine Bow is no stranger to wind energy.

Wyoming’s first wind energy was generated in 1982 by two turbines in Medicine Bow.

At the time, the turbines, installed by the National Aeronautics and Space Administration and the United States Department of Energy, they were the largest erected in the U.S. Each had two blades and produced a combined 6.5 megawatts of energy.

Although producing a minuscule amount of energy the first project did prove a point, wind energy generation had potential.

Fast forward nearly 40 years and the potential has been realized.

In addition to the new 21st-century wind projects and transmission lines, the company’s Energy Vision 2020 focus will upgrade, or “re-power,” the company’s existing outdated wind fleet with longer blades and newer technology to boost output and extend the life of projects similar to recent upgrades at the aging Foote Creek Wind Farm at Arlington.

Initially commissioned in 1999 as a joint demonstration project between PacifiCorp and the Eugene Water & Electric Board, Foote Creek has outlived its outdated technology.

In response, PacifiCorp has removed the 68 existing 600-kilowatt wind turbines — installed between 1998 and 1999 — and will replace them with 13 new modern turbines, each capable of producing four megawatts of energy apiece.

Repowering Foote Creek will renew the facility’s certification to receive federal production tax credits, which will be passed on as savings to PacifiCorp customers, company officials said. It will also reduce ongoing operating costs associated with maintaining the older turbine equipment.

“For Rocky Mountain Power, wind projects have formed the largest share of our investment in generating resources since 2001,” Eskelsen said. “By expanding our transmission capability — and owning the distribution network — it will enable us to be more flexible to meet the needs of our customers.”

To meet those needs, Rocky Mountain Power consistently reviews its “integrated resource plan” to keep up to date with the advances in technology. The latest plan was completed in October 2019, Eskelsen said, with an emphasis on battery storage and solar projects.

“As we move forward with the planning exercises we are always working toward the next edition, “Eskelsen said. “Most of the planning involves detailed computer modeling and research on what our customers are expected to need in the coming years. We score (our development) based on costs and risks over the long term.”

Although the development of each power supply has its pros and cons, wind energy and solar have become the poster children for the nation to achieve the goal of net-zero emissions produced by fossil fuels by 2050.

For various reasons, wind energy has a slight edge over other environmentally friendly power production projects including solar, geothermal, biomass and on the distant horizon small modular nuclear reactors similar to those currently powering many U.S. submarines and merchant ships.

Energy analysts say that wind and solar energy production is ripe for the taking.

It was the strongest third quarter since 2015 when 1,901 megawatts of wind power capacity was added.

Still, green energy has a mountain to climb to take over power production dominance.

Less than 40% of U.S. power generation is currently from carbon-free sources, including renewable energy, hydroelectric and nuclear power.

According to S&P Global, natural gas and coal generation combine for nearly 60% of the U.S. power mix in 2021. To achieve carbon-free generation by 2035, it is estimated that 4.8 billion megawatts per hour of natural gas, coal and oil generation would theoretically need to be replaced by 2035 to meet current demand.

Despite some states taking a more aggressive timeline to cut ties with fossil fuel consumption than others, a transition will have to be made, Eskelsen said.

“Any transition will likely be made at a more gradual pace than some would want,” he added. “But, what we have seen in our company is that the relative cost to customers of renewable energy is now very competitive and in many cases less expensive than fossil fuel generation. This is why most all of our future expectations for generating technology is renewable only.”