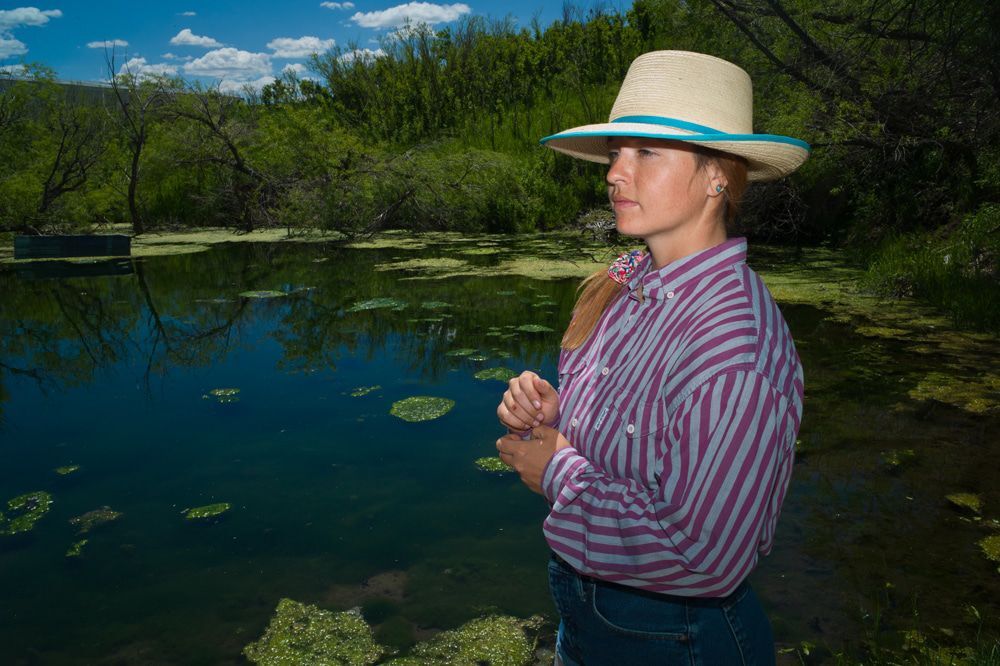 Dalle Rutledge, a fifth-generation rancher, talks about her future at Donahue Spring on her family’s ranch. 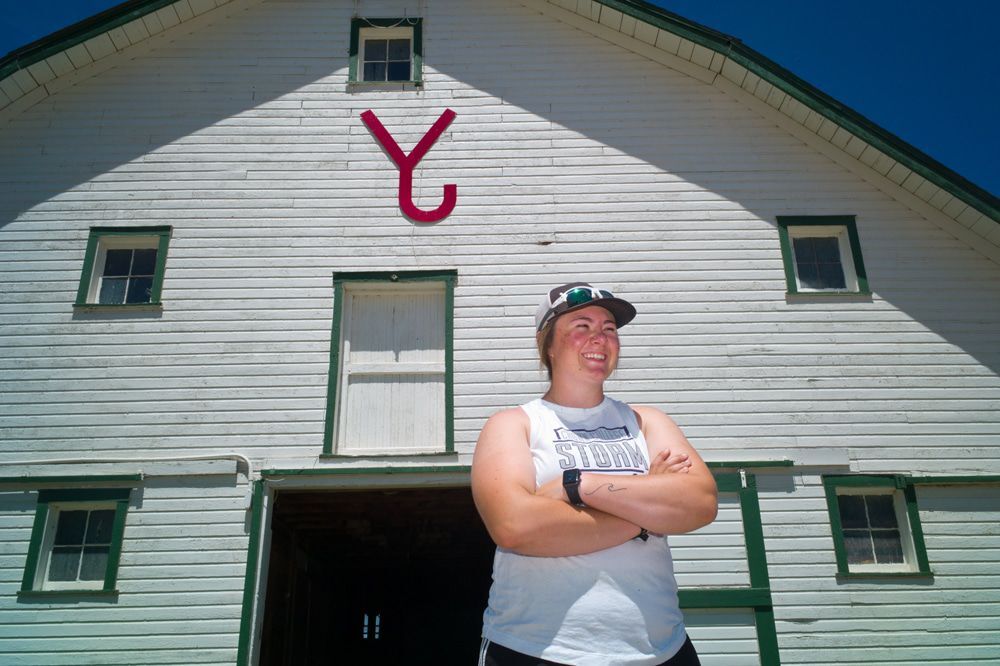 Kaylee Wilson, a family member at the Petsch Ranch, stands for a photo in front of the Y6 brand and barn. 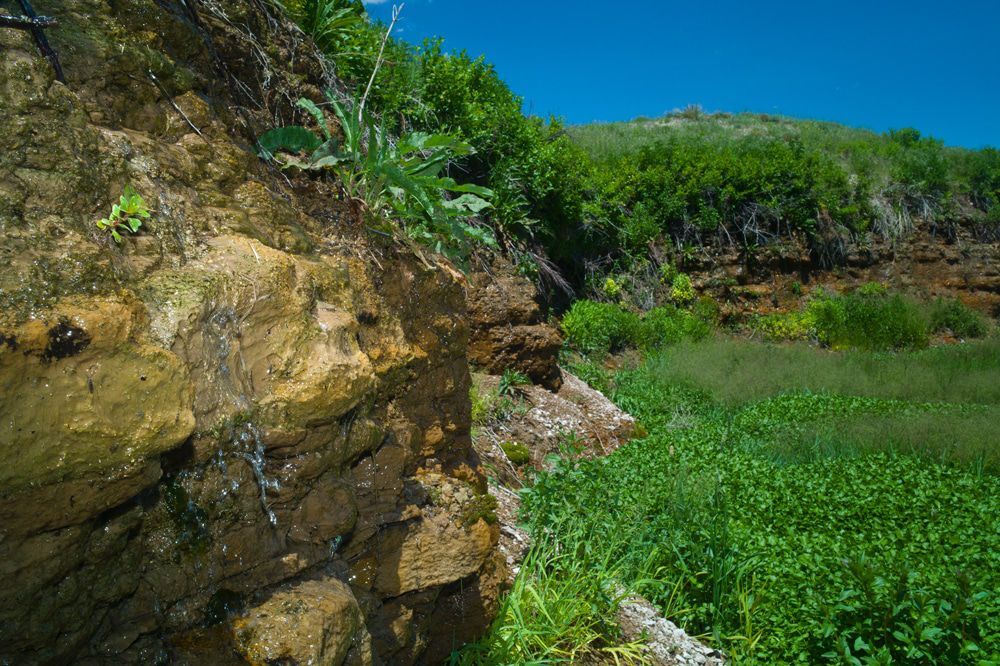 Water flows into the Horse Creek Basin from springs like this one on the ranch owned by Tim and Bernadette Rutledge. 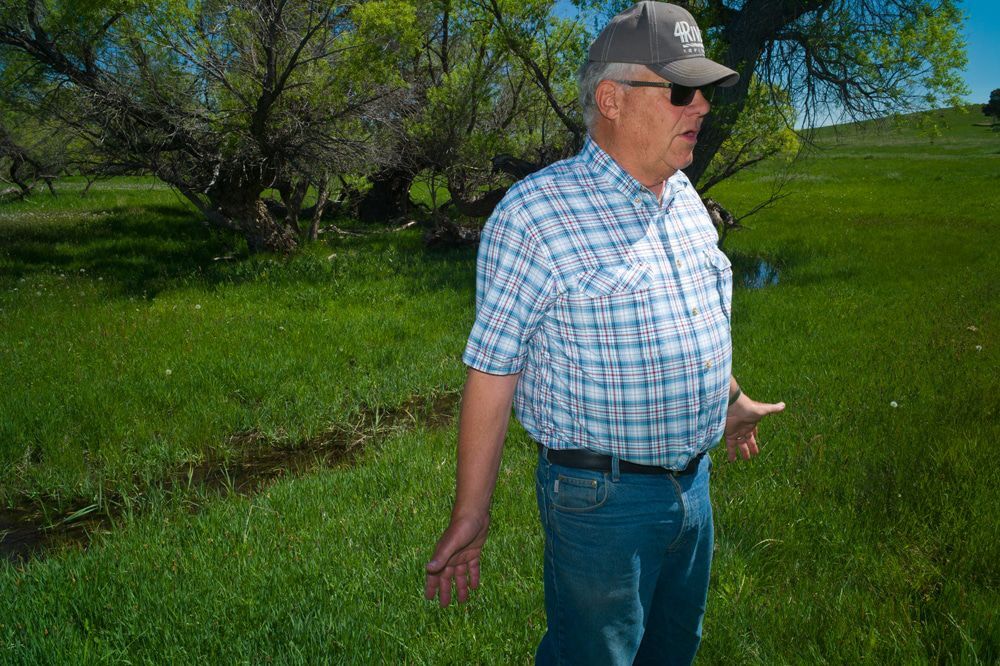 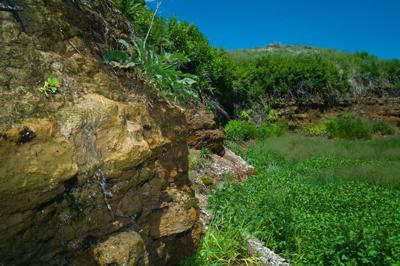 HILLSDALE — Tim Rutledge says he’s already seen the damage large water wells can do to the Donahue Spring, a sweetwater fount that bubbles to the surface a short stroll from the front door of his ranch home.

A muskrat plays in the spring’s pool, which once supplied two houses and a corral with a steady flow of water. Cottonwood trees and willow bushes shade grassy banks, creating cool relief on the high-plains ranch.

The spring flows from an outcrop at the edge of the Horse Creek Basin, a sweeping, semiarid 1,600-square-mile bowl that drops from higher ground around Cheyenne and tilts toward the North Platte River.

Rutledge, 78, orients visitors from his front yard, pointing past farming equipment to the spring as cow dogs Cora and Cricket sniff the newcomers.

“Sometime in the ’70s, probably the late ’70s, that spring diminished so we didn’t have enough to water the house,” he says. “It didn’t clear quit, but it pretty much did.”

Rutledge found another source of water for his home — a well on his property he developed for domestic use.

The loss of flow in Donahue Spring, however, coincided with another development, Rutledge says. “That was when they were pumping several wells to the south of us.”

Those high-capacity wells, used to irrigate ranch and farmland, were pretty deep, according to Rutedge, and they pumped up a lot of water. Donahue Spring was one of many features that changed.

“All these little cricks here were running half or less,” he says of four or five delicate tributaries of Little Horse Creek and Horse Creek. “Some of them were down to a trickle.”

Then the owners of some of those large, high-capacity wells to his south stopped pumping, Rutledge says. “I don’t think they were cost-effective so they shut them down.”

Donahue Spring came back. So too, did the creek running past the ranch yard.

Now he fears a new proposed development will have an even greater impact on the productivity of what his family calls a “small- to medium-sized ranch.”

“I imagine it would decrease it severely,” he said. “You need water to do about anything.”

Rutledge is one of 17 individuals, families, ranch partnerships and companies contesting an application by members of the Lerwick family, Laramie County landowners, for eight new high-capacity irrigation wells.

These are not stock-tank wells run by a windmill, or domestic wells supplying a couple of ranch houses. They are larger-diameter deeper straws connected to center-pivot crop irrigation systems, capable of pumping 1.5 billion gallons per year from the aquifer, the protesters claim.

The aquifer — known as the High Plains or Ogallala — has been “heavily used” since the 1970s and its diminishment led the state engineer in 1981 to create the Laramie County Control Area, restrict groundwater use and order certain minimum distances between new and existing or proposed water wells.

Though then-State Engineer Pat Tyrell in 2015 relaxed some restrictions based on new information, wells capable of pumping more than 25 gallons a minute still require extra public scrutiny. The Lerwicks’ proposal, fitting that bill, was the subject of a three-day hearing in Cheyenne last week. (For more on the hearing, read part 2 of this series.)

The protesters say the developments would diminish the aquifer to their detriment and shouldn’t be permitted. They fear the water from the new wells could eventually be transferred temporarily — for remuneration, if desired — for oilfield use, though the Lerwicks have said their aim is agricultural irrigation.

Ultimately, the matter will land on the desk of State Engineer Greg Lanning.

The question before the state engineer is pivotal and precedent-setting — “the most important case in the U.S. right now,” according to Reba Epler, an attorney whose family owns ranch property in the control area. “It represents a turning point in how we manage natural resources.”

At stake, Epler says, is whether we as a country decide to over-pump or follow “the path of being mindful of the resource.

“If we continue down the path of extractions, we will not have running creeks in Laramie County,” she says. “We need these for the health of the land and our future generations.”

Attorney Epler, whose family ranch straddles Lodgepole Creek, describes the issue bluntly. The new wells, she says, “will steal water from our creek.”

The family uses one center-pivot irrigation system that pumps up groundwater to irrigate a hay pasture.

“We used to have three,” she says, but the ranch abandoned two of those. “We decided the aquifer was in real trouble” and took advantage of a federal buyout program to abandon the wells.

“It was really affecting neighbors,” she says. “Our stock wells were going down.”

Those wells have since recovered, she said, but Lodgepole Creek is still hurting. As a kid, she would fish in the waterway, which was too wide to jump over. This June, it is narrow enough that she steps across.

“The flow in Lodgepole Creek is so diminished that I would argue it’s past the critical ecological threshold,” she says. “Trout, turtles, frogs — those don’t exist anymore.”

Science supports her fears, Epler says. “It’s not that I’m coming up with this on my own.”

Rolling into Alan Kirkbride’s ranch home on Sprager Creek, another cattle operation in the Horse Creek Basin, is like arriving at an oasis. A rivulet gurgles through the front yard before joining the creek proper, and ample trees shade the yard in an otherwise spartan landscape. Average annual precipitation in the area is about 15 inches — semi-arid.

Eight family members are part of the Harding & Kirkbride Livestock Co., a going concern since 1924. Ancestors came over from Yorkshire, England in 1889, according to Kirkbride.

Today, “it’s a pretty big operation,” Kirkbride says as he shows off lush grass on the banks of four-mile long Sprager Creek. Six families live on the ranches, two reside in Cheyenne.

Kirkbride doesn’t irrigate. “We have a few impoundments which have backed up water enough to be pools,” he says. The ranches also have between 40 to 50 stock and domestic wells, most 75 to 150 feet deep. The water table beneath his house is about 19 feet down, he says: His domestic well is 110 feet deep and seems “real abundant.”

He describes how the water flows underground, how high-capacity Lerwick wells might disrupt his family’s ranches.

“Experts say this stuff is very connected,” Kirkbride says. “If they’re very connected then the state engineer is putting a lot of users at risk” with potential approval of the Lerwick application.

“My fear is that if there’s significant groundwater pumping as has been applied for,” he says, “it will drastically lower the water table, probably drying up this creek and the others along this area here.

“We could re-drill our darned wells,” he says. “What seems irreplaceable is a little valley like this and other little valleys like this across a semi-arid grassland. They’re just precious.”

Water rights at the Petsch Ranch, where a large Y6 brand marks the front of a towering a white barn, date back to 1883, seven years before Wyoming became a state, Rowdy Petsch says. History lives in the ranch yard: Tom Horn’s cabin, as the family calls it, still stands, last used to warm newborn calves during a spring storm.

“Legend says he stayed there and worked,” Petsch says of the range detective.

At least some of the rules that applied in Horn’s day, when suspected rustlers and other interlopers might stop a bullet before they stopped a neighbor’s water flow, seem to still pertain to ranching today.

“A cow has to drink water every day,” Petsche says. And stockgrowers still defend their turf.

“We are very fortunate to have a territorial surface-water right … the running water that most people don’t have,” he says. Petsch isn’t against sharing, he says.

“Would I have protested one well?” he asks. “Probably not. I protested the eight because I believe it’s excessive … All I am wanting to do is protect that [territorial water] right. You have to protect prior appropriators.”

Post-damage relief — available should he be able to show Lerwick drilling affects his rightful flows — would not resolve a dewatering injury.

“When harm affects me it’s too late,” he says. Even if pumping were stopped based on diminished natural flows in the Horse Creek Basin, restoration would take a long time, he says.

“It is a massive economic doldrum we would be in at that point.”

The ranch’s next generation would like to continue the operation, Petsch said. “We need surface water to carry on.”

Back at Donahue Spring that next generation has a big-picture view of agriculture and ranching today. Rutledge blames the well-permitting conflict on the state engineer’s relaxed orders. His granddaughter adds another perspective.

“As time goes on, as people become more progressive and more people move into urban areas, a lot of times they demonize ranchers,” says Dalle Rutledge, 25, who wants to be the fifth-generation operator on the Donahue-Rutledge Ranch.

She would carry on what two Donahue brothers began in 1905 — the year the ranch founders dug their first irrigation ditch — only if high-capacity wells “upstream” of ranch springs and creeks don’t interrupt the historic output of the natural seeps.

“It will add a huge blow to an already hard environment,” she says of less water.

“That is really hard on my generation,” she says. “For our neighbors to pile this water thing on top of us, it’s horrifying. It’s pretty unbelievable to me.”