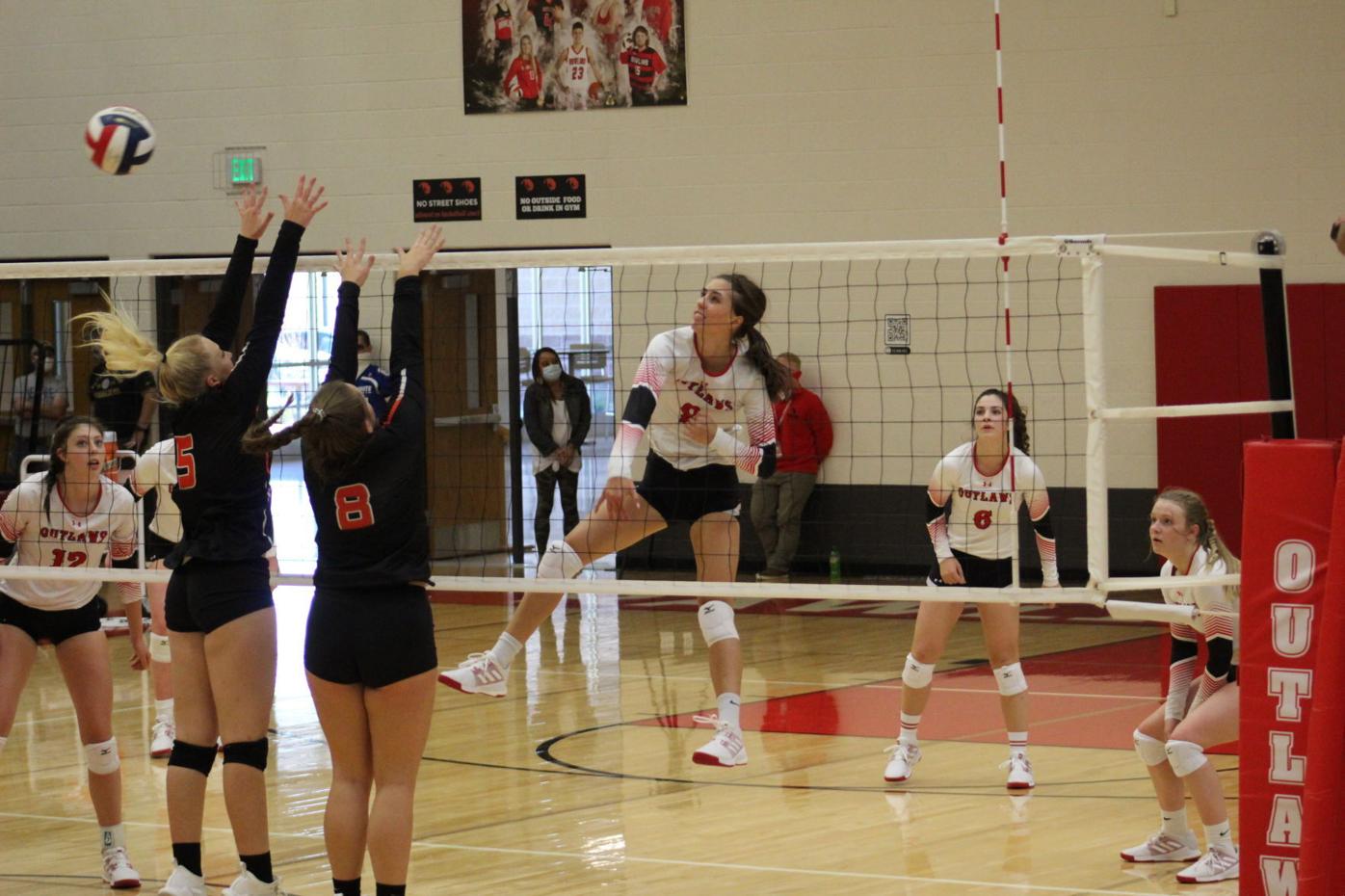 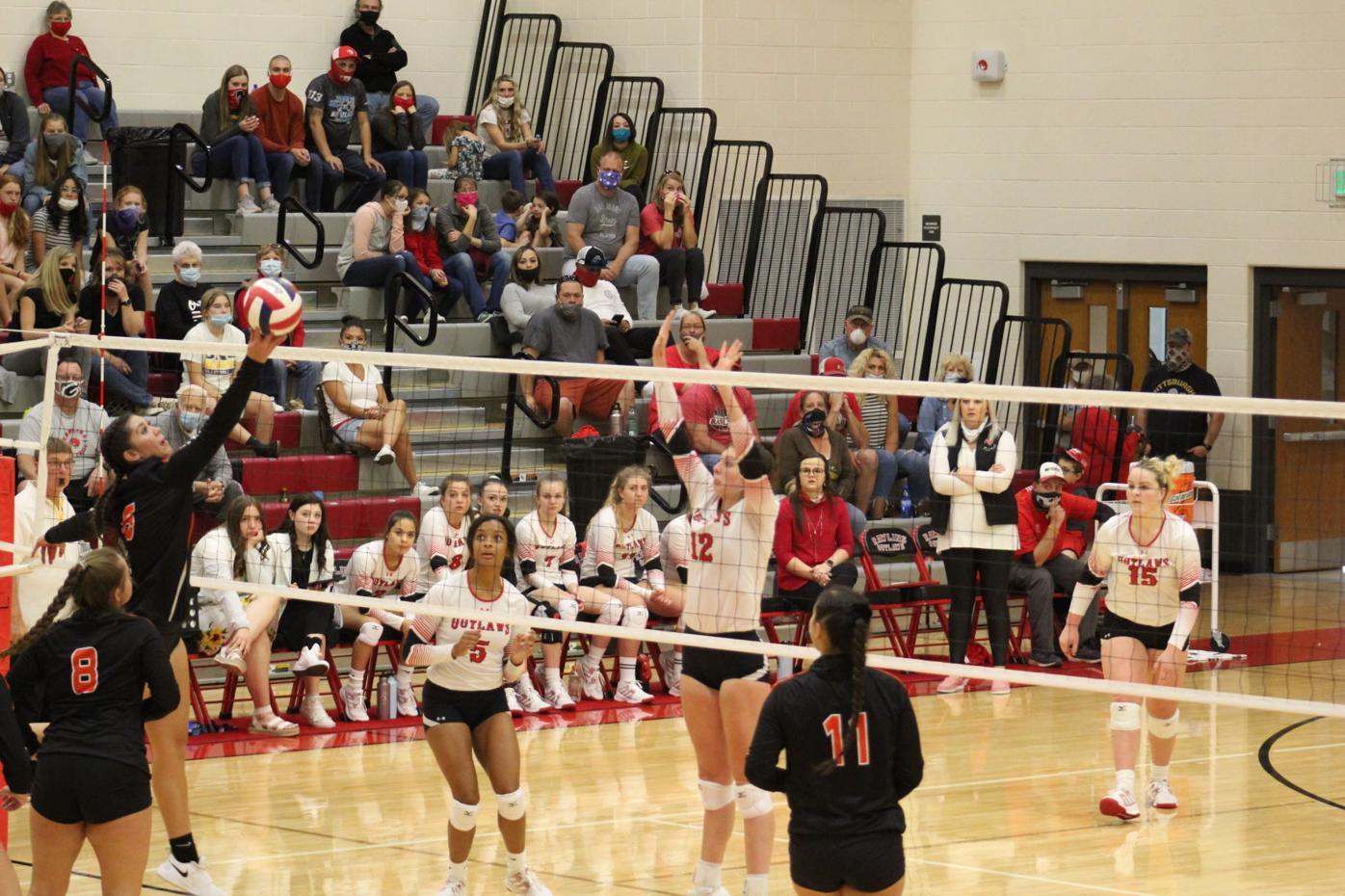 Rawlins High School junior Jessie Jerome goes up for a block against Worland’s Darla Hernandez. Aliya Edwards, left, and McKenzie Earl, right, were ready to spring into action as they waited to see where the ball would go.

Rawlins High School junior Jessie Jerome goes up for a block against Worland’s Darla Hernandez. Aliya Edwards, left, and McKenzie Earl, right, were ready to spring into action as they waited to see where the ball would go.

RAWLINS — The Rawlins High School volleyball team is back to its winning ways. The Outlaws beat the Worland High School Warriors in five sets on Saturday in Rawlins. Coming off a tough loss against Mountain View last week, the Outlaws were due for a win and managed to shut down the Warriors to pick up the win during homecoming week.

Saturday was also a rematch of the 2019 state championship match. Outlaw fans will recall their team easily shutting down the Warriors in straight sets en route to the championship. Worland was clearly prepared and came out strong during the first set and managed to pick up the win, 25-20.

Unfazed, the Outlaws bounced back in set two. Despite falling behind early, the team rallied back to tie the score 5-5. Worland put down a big kill but followed that up with a service error, keeping the score tied, 6-6. Junior Jessie Jerome then delivered a big block against a Worland attack to give the Outlaws the lead, 7-6.

Rawlins pulled ahead after senior Mckenzie Earl slammed a hit down around blockers to widen her team’s lead, 15-13. Earl followed that up with a block that Jerome tacked a kill of her own on to. The momentum was clearly swinging in Rawlins’ direction, and Worland’s head coach Brittany Miller was forced to take a time out after the Outlaws went up 19-14.

Miller’s attempt to ice the Outlaws momentum failed after senior Maddison Wright scored a kill, followed by a Worland error and a timely ace from Earl. Leading 22-14 after the ace, Rawlins needed just three more points to finish the set. A service error from Worland, another kill from Jerome and yet another service error from Worland gave the Outlaws the win in set two, 25-17.

Rawlins faltered again in the third set, despite jumping out to an early 10-3 lead. Worland was able to bring the set back within reach with solid offensive efforts as well as a handful of errors from the Outlaws. It was ultimately errors that would seal the deal in the third set, giving the Warriors the 25-23 win, which put them up two sets to one.

The fourth set was make or break for the Outlaws. They needed a win to keep the match alive and put themselves in a position to win the set. Early on, it was clear they weren’t going to relent easily. Rawlins went up quick, 6-2, with the help of kills from senior Brooke Palmer, Wright and Earl. Senior Aliya Edwards also picked up a kill that helped Rawlins go up 7-4.

Another kill from Edwards, an ace from Earl and a big block, also from Edwards, put the Outlaws up 10-5. The set was slipping away from the Warriors, and they knew it. An out-of-bounds Outlaw kill followed by a tricky, off-speed tip and a quick kill from Worland brought the set to 10-10 and forced the Outlaws to take a timeout to regroup.

Worland came back from the timeout still swinging, picking up an ace and a kill quickly to take the lead 13-11. Palmer answered back with two kills, but Worland also picked up two of their own, keeping the score lead, 15-13, over the Outlaws. The set was about as close as could be possible, with each team trading the lead all the way to the latter part of the set.

Wright blocked a Worland attack to force set point, 24-21 in favor of the Outlaws. Worland opted for a timeout to try and salvage the set, which nearly worked. They racked up three consecutive points but fumbled a pass, an error they couldn’t recover from, and the Outlaws won the fourth set, 25-23.

Spectators at the match were treated to an incredible back-and-forth for four sets and the fifth set, the tiebreaker, wasn’t any different. The score remained tied up to 5-5 before the Outlaws rallied the score in their direction. Edwards and Palmer both tallied up another kill each, and the Warriors struggled to make good passes. With Rawlins up 8-5, Miller took a timeout.

Following the break, Rawlins kept control until Worland was able to pull the set back within reach, 13-13. Feeling the pressure, Worland committed another service error to give Rawlins the lead again, 14-13. The Warriors managed to catch Outlaws defenders off guard with a tip on the second hit to tie the score yet again. Off a Warrior serve, Rawlins put together a perfect bump, set, spike. With the spike courtesy of Edwards, the Outlaws went up 15-14 to force a set point. Trying to trick the Outlaws again, Worland attempted a tip but put it out of bounds. Rawlins closed out the set 16-14 and won the match three sets to two.

The Outlaws volleyball team will be back at home against Buffalo on Friday, Oct. 9, starting at 4 p.m.