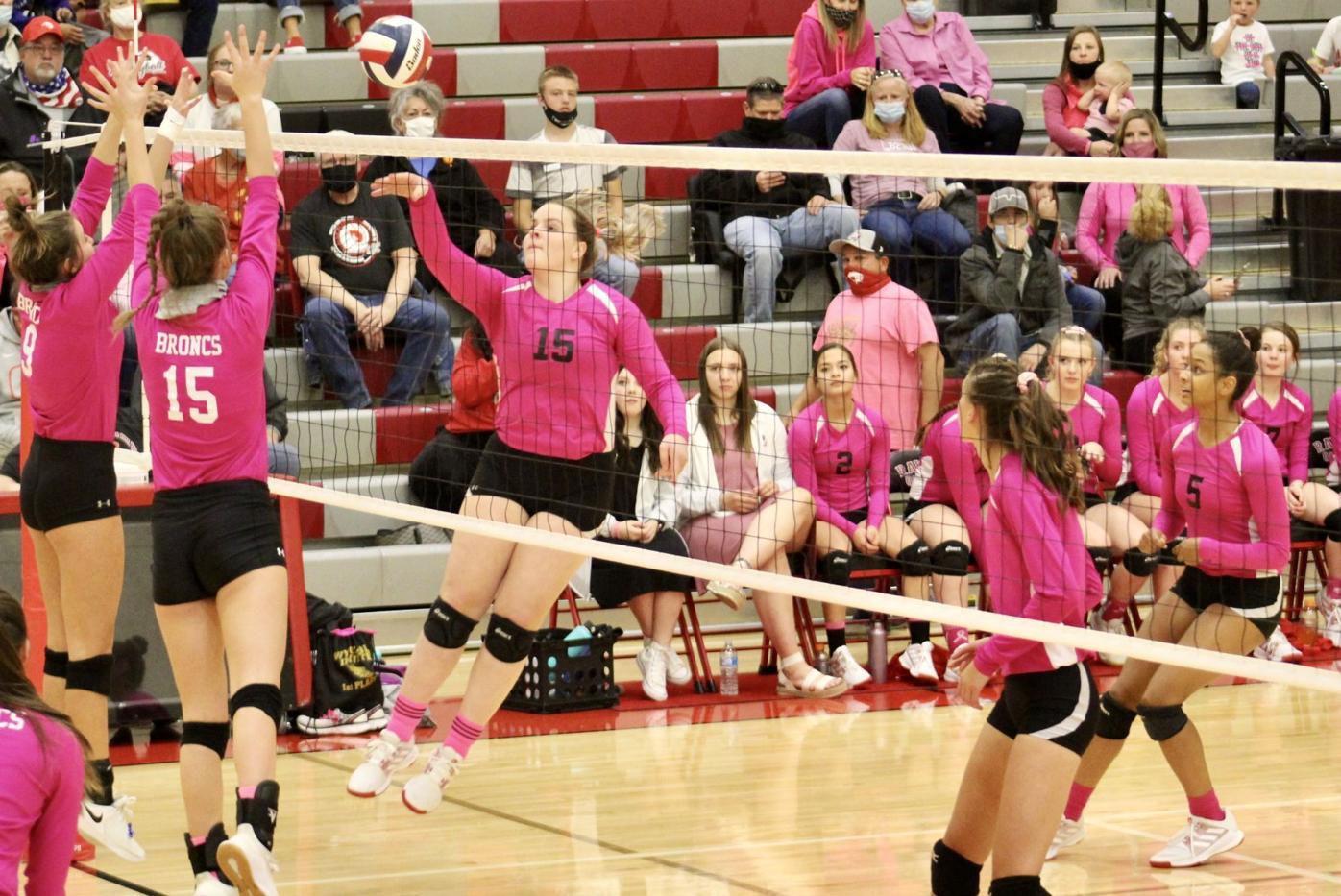 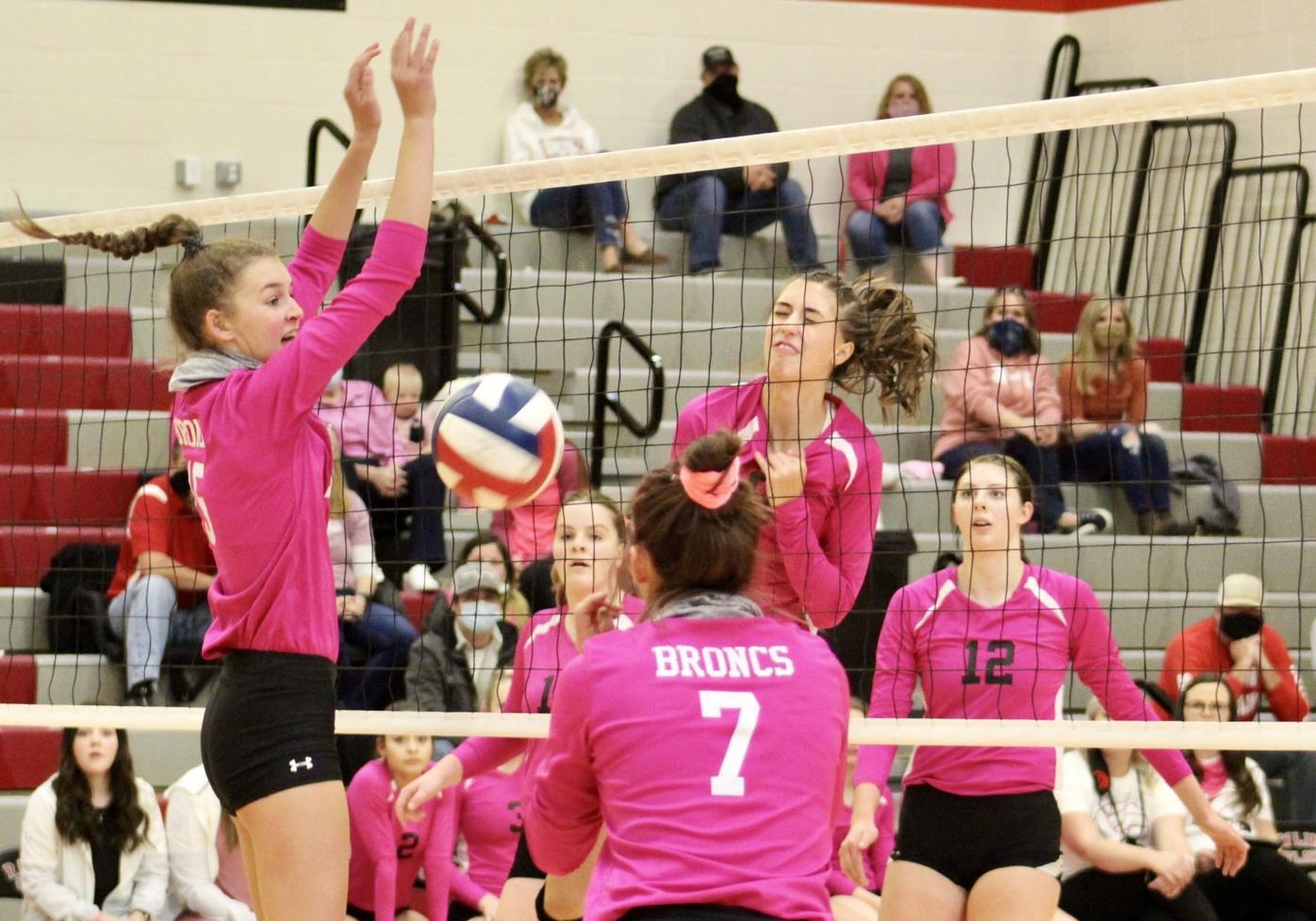 Maddison Wright gets a ball around Burns blockers during Friday night’s win against the Broncs while junior Jessie Jerome, right, and Mckenzie Earl watch on. The Outlaws won the conference match in three straight sets.

Maddison Wright gets a ball around Burns blockers during Friday night’s win against the Broncs while junior Jessie Jerome, right, and Mckenzie Earl watch on. The Outlaws won the conference match in three straight sets.

RAWLINS — The Rawlins High School volleyball team made quick work of the Burns Broncs on Friday in Rawlins. The Outlaws won in straight sets to secure the victory in their final home game of the regular season. The win on Friday pushed Rawlins to 10-5 overall and 4-0 in the 3A Southeast Quadrant.

In the first set, Burns took the lead 2-0 following an out-of bounds hit from the Outlaws and a successful block on an Outlaw attack. Senior Brooke Palmer put the Outlaws on the board first with a big kill followed by a block from senior Skylaar Young to tie the score 2-2.

Rawlins began to pull away after a kill from senior Mckenzie Earl and an off-speed tip from senior Aliya Edwards put the team up 6-4. Burns then committed a passing error, and Earl slammed down another kill to put Rawlins up 8-4. Toward the middle of the set, Burns got some momentum and was able to bring the score back to a tie, 15-15.

Senior Maddison Wright put an ace on the board after a tricky serve proved too much for the Broncs to handle. Wright’s ace put Rawlins back in the lead 16-15. A kill attempt from Young went out of bounds and brought the score back to a tie, 16-16.

Burns couldn’t keep up with Rawlins’ pace, though. A tip from junior Jessie Jerome caught the Broncs defense flat-footed. However, they managed a block followed by a kill to keep the score close, 18-18. Rawlins kept the pressure on and strung together four huge offensive points. Edwards picked up two kills, and Jerome and Earl tacked on one each to put the Outlaws up 21-18.

The string of offensive points from the Outlaws forced Burns’ head coach Shelle Rostad to call a timeout in an attempt to stop Rawlins’ momentum and keep the set within reach. The timeout didn’t work as Rostad intended. Two consecutive kills from Wright put the Outlaws up 24-20. A kill from Earl sealed the deal 25-20 in favor of the Outlaws.

In the second set, Burns proved it wasn’t going to go down without a fight. The Broncs managed to jump out to an early lead, 7-3, before Rawlins found some momentum. A kill from Edwards put the score at 7-4 in favor of Burns. Then, a Burns player found herself in the net, dropping a point to a net violation and bringing the score to 7-5. Burns managed to keep the lead for just a bit longer before Rawlins came roaring back. The Outlaws closed out the set 25-15.

At the beginning of the third set, Rawlins came out swinging. They went up quick, early and big, jumping out to a 7-1 lead before the Broncs were forced to take a timeout to try and salvage the set. The timeout seemingly worked as Rawlins faltered a bit and the Broncs took the lead 11-7.

Earl, who swung hard the entire match, put a kill just out of bounds, and Burns went up 11-13. Burns faltered on a poor pass and gave the Outlaws the in they needed to get the momentum swinging in their direction again.

With Edwards behind the service line, Rawlins got back in the groove. Earl racked up another couple kills, along with a couple from Wright and two aces from Edwards as the Outlaws went up 19-15. Again, Burns committed a net violation followed by a roofing call. The Broncs didn’t have an answer for the Outlaws offensive onslaught.

With the set at 21-16 in favor of Rawlins, head coach Aubrey Griffiths pulled her varsity starters to give her backup players some playing time. Sophomore Morgan Lonn picked up a kill to put the Outlaws up 22-17. Then, junior Abbey Pixler picked up an ace to keep Burns looking flustered. The Broncs managed just one more offensive point before hitting the ball into the net to end the set 25-18.

The win over the Broncs was a much needed conference victory for the Outlaws. Following the match on Friday, Rawlins traveled to Torrington to take on the Trailblazers in one of two remaining 3A Southeast Quadrant matches of the season. Rawlins won easily in three sets, 25-11, 25-16 and 15-15.

Rawlins will take on Wheatland on Saturday, Oct. 24, starting at noon. That match-up will be the final regular season match before postseason play begins.