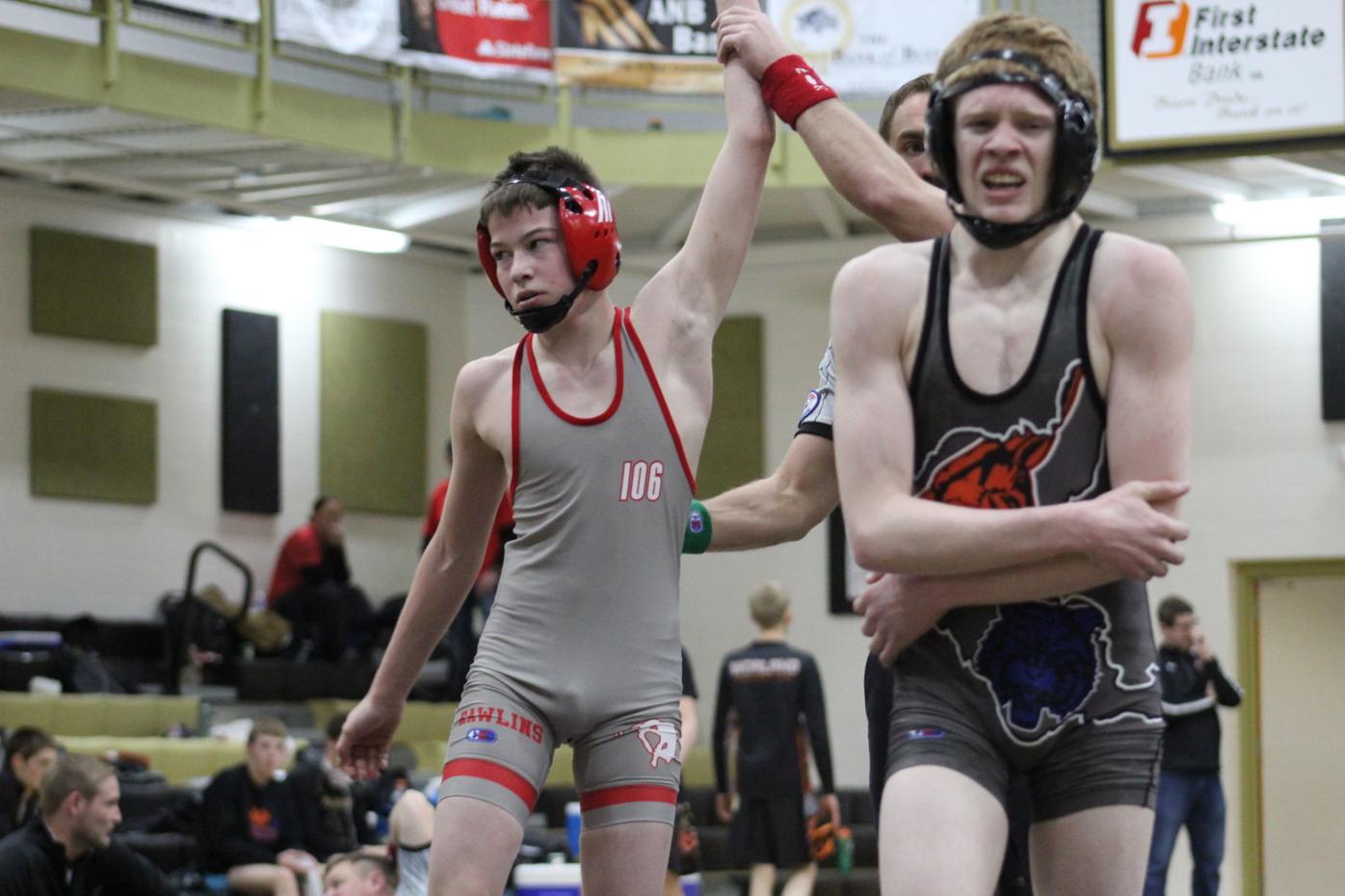 Blayne Coleman (106) gets his hand raised in victory after defeating Blake Durfee from Newcastle-Upton at the 3A East Regional in Buffalo on Saturday. 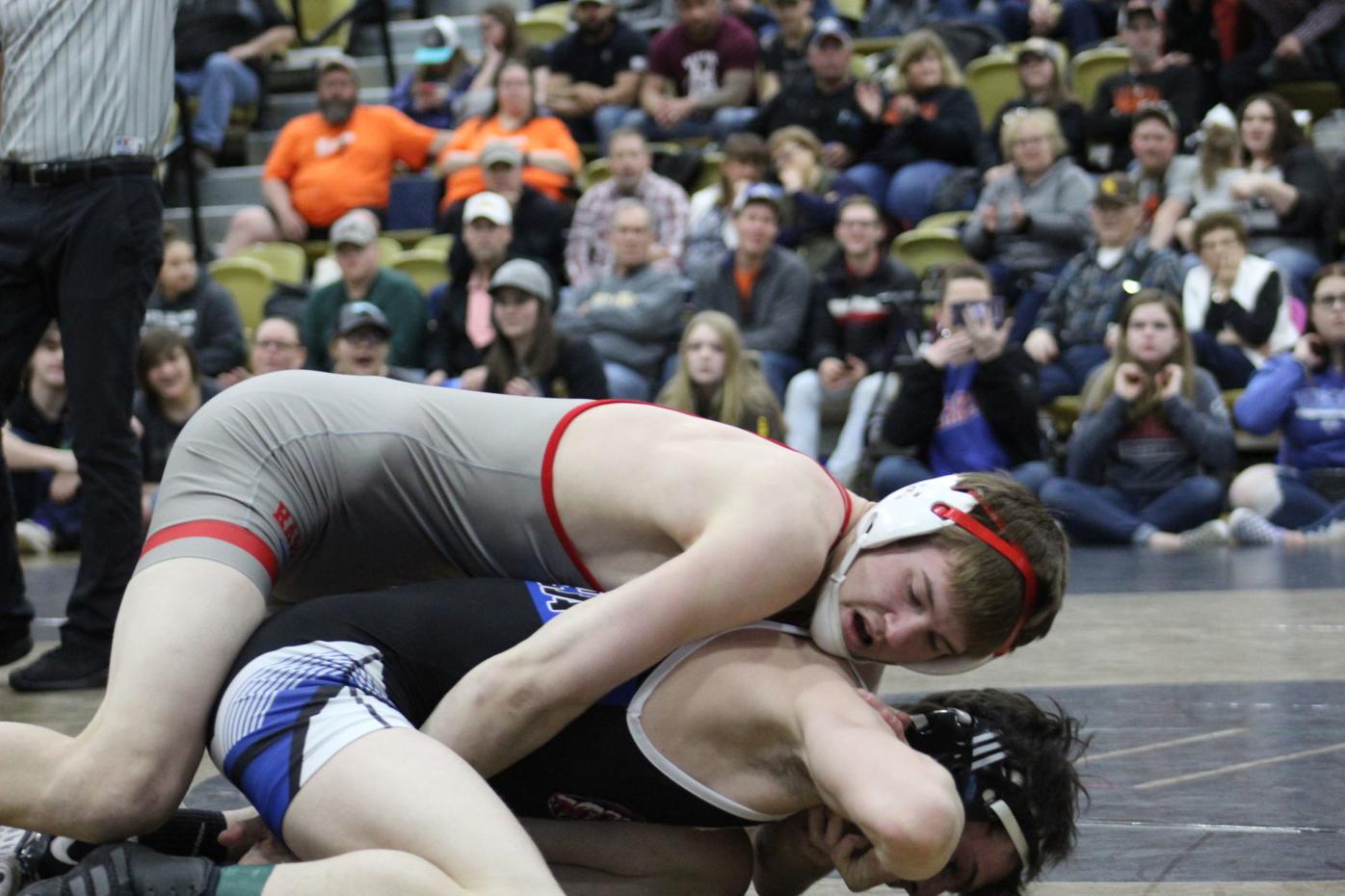 Senior Levi Bezold looks for offense on top against Devon Swisher of Douglas. Bezold (145) qualified for the state tournament after finishing 3rd in his bracket at the 3A East Regional in Buffalo on Saturday.

Blayne Coleman (106) gets his hand raised in victory after defeating Blake Durfee from Newcastle-Upton at the 3A East Regional in Buffalo on Saturday.

Senior Levi Bezold looks for offense on top against Devon Swisher of Douglas. Bezold (145) qualified for the state tournament after finishing 3rd in his bracket at the 3A East Regional in Buffalo on Saturday.

BUFFALO – The Rawlins High School wrestling team traveled north to Buffalo for the 3A East Regional wrestling tournament on Friday and Saturday. The Outlaws returned home with one finalist and nine state qualifiers who will set their sights on a state title next weekend in Casper at the WHSAA 3A State Wrestling Championships.

Leading the team’s efforts this past weekend was sophomore 106-pounder Blayne Coleman. Entering the tournament with a 28-13 record, Coleman was the 3rd seed in the bracket.

After receiving a bye in the first round, Coleman entered the second round of competition set to face Colter Guty of Wheatland. He made quick work of his Bulldogs foe, ending the match via pin fall in 3:15. The victory moved Coleman into the semifinal bout where he would face Blake Durfee of Newcastle-Upton’s combined team.

Durfee, who was 34-13 heading into the 3A East Regional, was the second seeded wrestler in the weight class. He had also beaten Coleman at an event just a week prior. Coleman didn’t let their previous meeting phase him. He stepped on the mat ready to battle and edged Durfee 4-2 after six tough minutes of competition.

The win over Durfee put Coleman into the championship match, making him the Outlaws’ only finalist on the weekend. His finals bout was against Anthony Martinez of Worland, the top seed in the bracket and the number one ranked wrestler in the 3A 106-pound weight class.

The entire bout was a back and forth brawl, with Coleman creating most of the action by staying on the offense through all three periods. Despite his best efforts, Coleman lost the bout, 4-2 to finish as the runner-up in the bracket. His second-place finish also ensured seeding criteria in the state championship bracket. Wrestlers who place in the top four in their region get seeded, while wrestlers placing 4th-8th are randomly drawn into the bracket. A top-four finish at regionals helps set a wrestler up for a favorable position at the state tournament.

Head coach Nate Lee was impressed with his 106-pounder’s performance and is excited to see him compete for a state title.

“Blayne showed up to compete and he executed a plan in all his matches,” said Lee. “He is very coachable and was able to smooth out a couple meticulous technique points this past week in practice.”

Accompanying Coleman with podium finishes were four other Outlaws. In the 145-pound bracket, senior Levi Bezold had a strong showing. He won his first match over Rhett Karr from Wheatland by a 9-8 decision, moving him into the semi-finals against Devon Swisher of Douglas. Swisher edged the Outlaw 4-2, dropping him into the consolation side of the bracket.

In his first consolation match, Bezold beat Jacob Rhoades of Newcastle-Upton 7-2. The win put him in contention for third place. He faced Colton Woffinden of Worland and won 4-0 to earn a third-place finish on the weekend.

At 152 pounds, junior Robert Flores brought home the fourth-place medal. Flores beat Douglas’ Karson Ewing via pin fall in 4:15 before falling to Buffalo’s Clay Reiner in the semifinals by a score of 6-0.

He would wrestle for third place after beating Max Meyer of Wheatland in the consolation semifinals. Flores finished in 4th place, dropping a close 8-7 decision to Tristan Wornkey of Newcastle-Upton in his final match of the weekend.

In the upper weights, sophomore Garrett Parker finished fourth in the 195-pound bracket, winning matches against Christian Peterson of Worland and Weston Simianer of Newcastle-Upton.

Rounding out the Outlaws place winners was senior Kenny Raymond, who finished third in the 220-pound bracket. Raymond picked up wins against Reid Foster of Douglas, Trey Write of Worland and Rhiley Grubbs of Torrington.

The Outlaws’ place winners all qualified for state at their respective weight classes. Toby Setzer (120), Erick Duran (126), Aden Martinez (132) and Josh Smith (138) also qualified. The Outlaws will compete in the WHSAA 3A State Wrestling Championships on Feb. 27-28 at the Casper Events Center. There will be a send-off for the team on the evening of Thursday, Feb. 27 at 6:30 p.m. at Rawlins High School.

With the state tournament now in their sites, Lee and company have high expectations for their group of qualifiers.

“My expectation this year is to have more state placers than we had the previous year,” said Lee. “Although we don’t have numbers this year, we have a special group of wrestlers who believe in the process of continuous improvement and have put in the work to improve on and master positions. We are ready to go.”