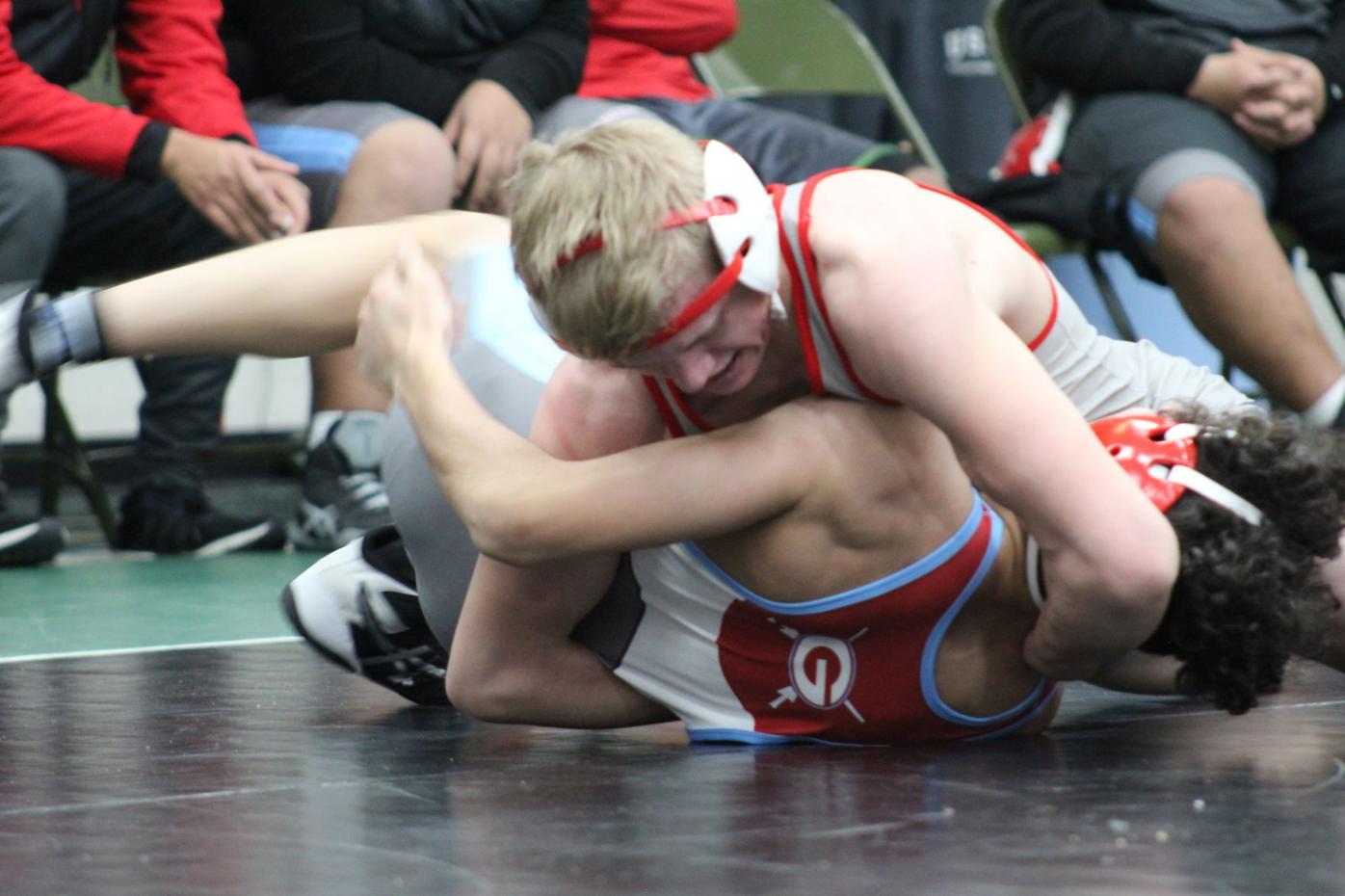 Josh Smith works to pin Andres Calix from Granger High School (West Valley City, Utah) on Saturday in Green River. Smith secured the fall just over the half-way point of the match and ended his weekend 4-1. 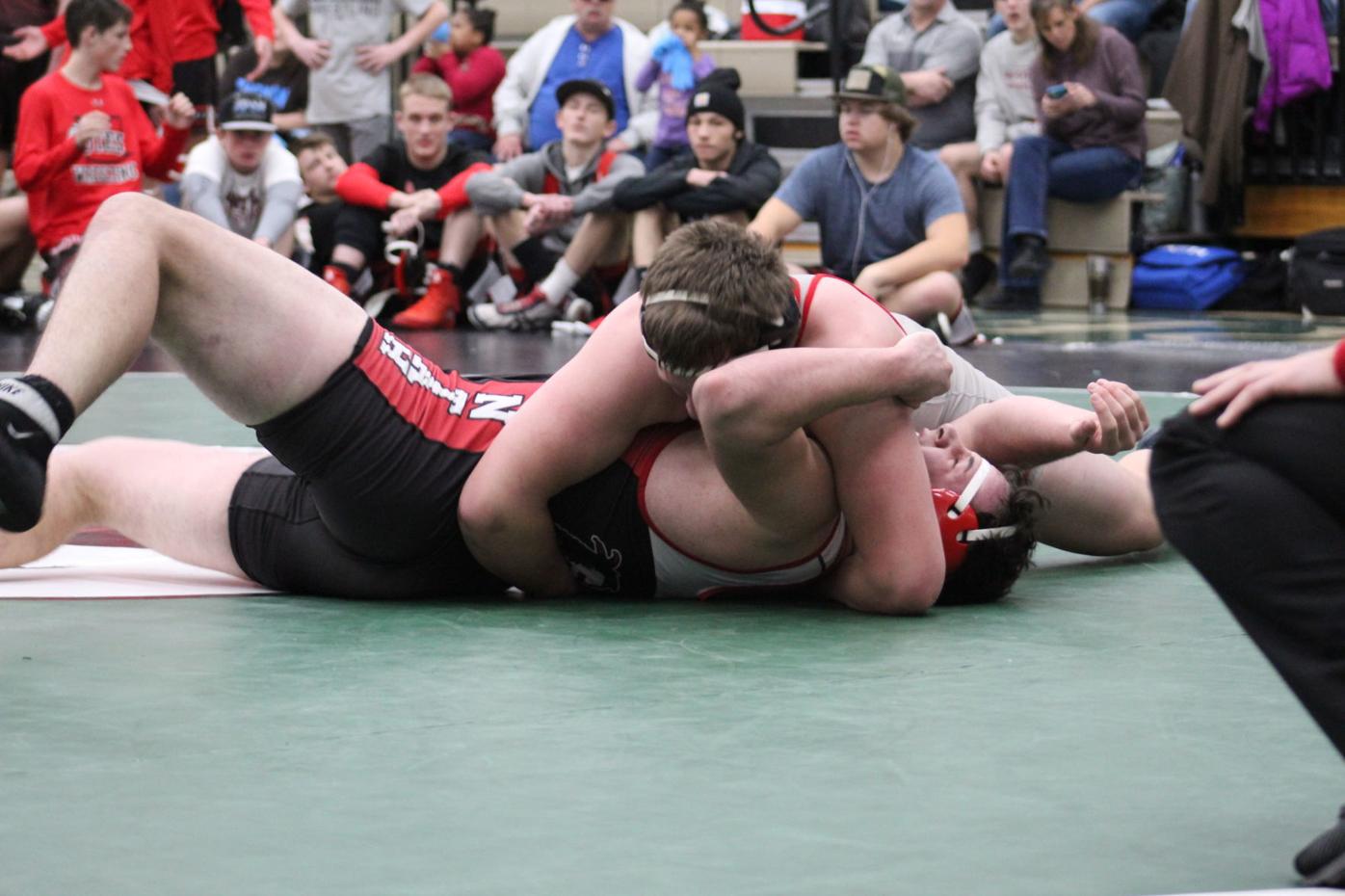 Josh Smith works to pin Andres Calix from Granger High School (West Valley City, Utah) on Saturday in Green River. Smith secured the fall just over the half-way point of the match and ended his weekend 4-1.

GREEN RIVER – Nothing indicates the holidays are over quite like having to weigh in and, hopefully, not be too surprised by the number that registers.

Rawlins High School wrestlers were taking tentative steps onto the scale last weekend as they returned to competition at the Thoman Soda Ash Memorial in Green River Jan. 3-4. Because of the holidays falling mid-week this year, the Outlaws’ lineup was looking scant heading into the competition, due to several team members being out of town still with their families.

Despite holes in their lineup, the Outlaws had a respectable showing at Green River, winning two duals and showcasing impressive individual performances. The prestigious Thoman Soda Ash Memorial is a dual-style tournament. Teams are placed into one of four pools on day one and then wrestle the teams from the other pools on day two. Individuals who go undefeated across both days of competition then vie for a position in the coveted “best of the best” dual.

In their second dual, the Outlaws faced 3A foe Mountain View. The dual proved to be a poor match up for both teams. In the weights Rawlins had wrestlers, Mountain View was open, and vice versa. That said, the final dual score was 39-39 and the Outlaws won it on criteria – giving up fewer forfeits than the Buffaloes did. The only Outlaw wrestler who had a match against a Mountain View wrestler was freshman Josh Smith (138) and he bested Tanner Collins by a 7-0 decision.

In their final dual of the day, Rawlins dropped a close match up against Northridge High School. Northridge is located in Layton, Utah and has a student enrollment of over 1,900, placing them in class 5A in the state. The Outlaws were able to pick up another six individual victories, this time from Parker, Raymond, Hayden Strong (HWT), Coleman, Smith and Flores. Parker and Smith both picked up pin falls and Flores, in arguably the most exciting match of the day, beat Ben Brown by a score of 14-8. The score in Flores’ match was 9-8 with less than 30 seconds remaining. Brown attempted to score and Flores countered his shot with a throw, a five point swing, giving him the comfortable victory.

On Saturday, Rawlins came out flat footed against Utah 4A juggernaut Uintah High School (Vernal), losing the dual 49-15. Three Outlaws were able to secure victories: Smith, Raymond and Coleman. Raymond won by pin fall at 5:38 in the match.

In the final dual of the day, Rawlins matched up against a 6A Utah opponent,Granger High School (West Valley City, Utah). The Outlaws finished the weekend on a high note with a 47-28 victory. The team accumulated seven victories by pin fall to secure the win.

Over the two days of competition, senior Kenny Raymond was able to string together another impressive performance. Raymond finished the weekend an undefeated 5-0 and made a strong case for himself to be selected in the best-of-the-best dual. He narrowly missed being selected, though, as it came down to criteria and the two individuals selected ahead of him each scored 30 team points on the weekend compared to Raymond’s 27 team points. Sophomore Blayne Coleman finished the weekend 4-1 and freshman Josh Smith also finished 4-1.

Head coach Nate Lee is anxious to have his lineup back to full strength, but commends the athletes who made the commitment to keeping their weight in check and showing up to practice and compete while still, technically, on break.

“As a coaching staff, we know that it’s tough to give up time with family and friends, but it is important to know that other athletes from other schools are facing the same challenges and the time everyone else is taking off is a good opportunity to make up ground on our opponents,” said Lee. “There was a strong correlation last weekend between the kids who showed up over break and how well they wrestled--that’s true for all schools who were in Green River. It was easy to tell who had been practicing and who hadn’t.”

The Outlaws will be back on the mat at the Uintah Tournament of Champions on February 10-11 in Vernal, Utah.