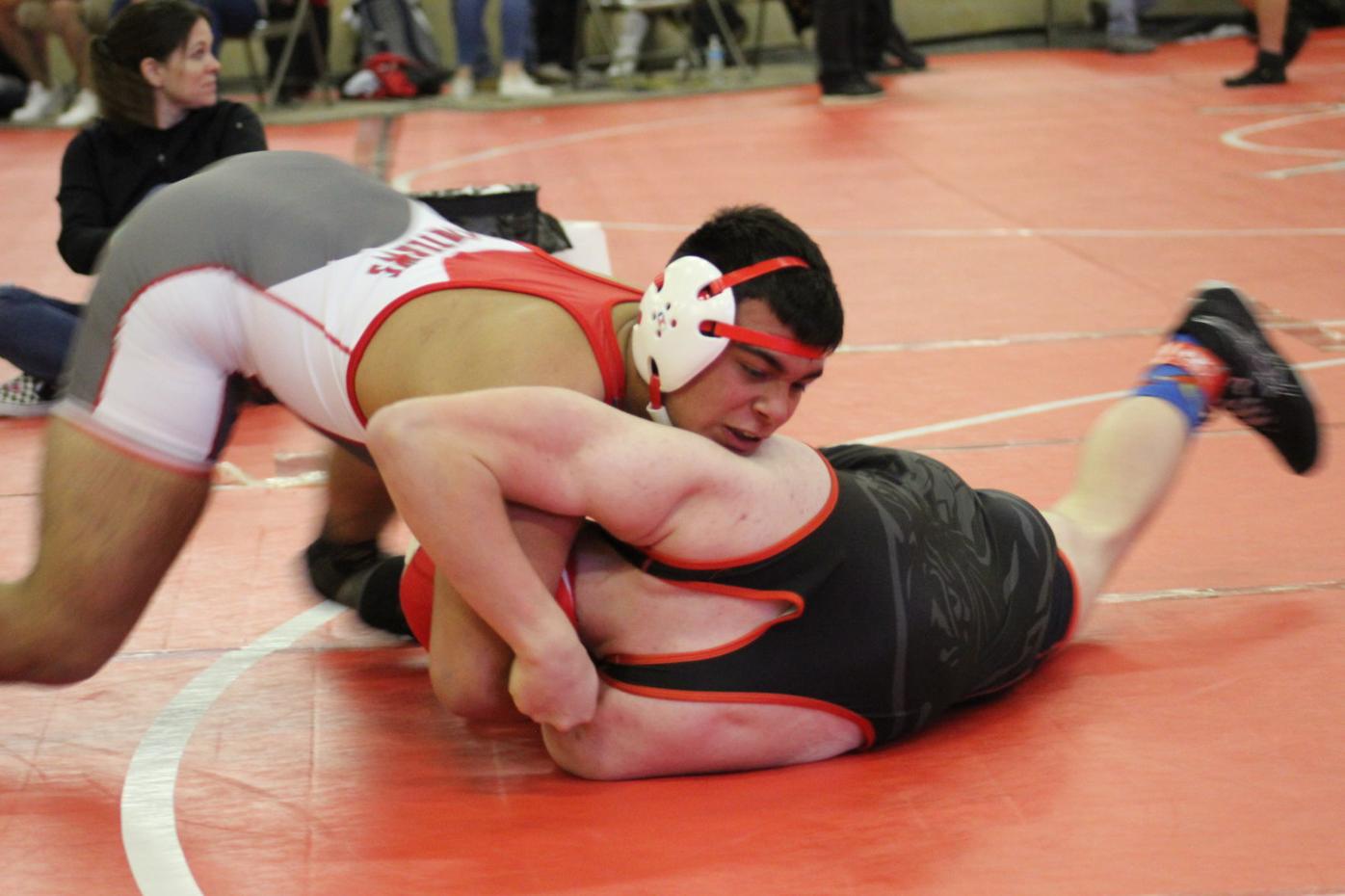 Rawlins High School sophomore Carlos Javalera sinks a half-nelson on his opponent during Saturday’s action at the Uintah Tournament of Champions in Vernal, UT. 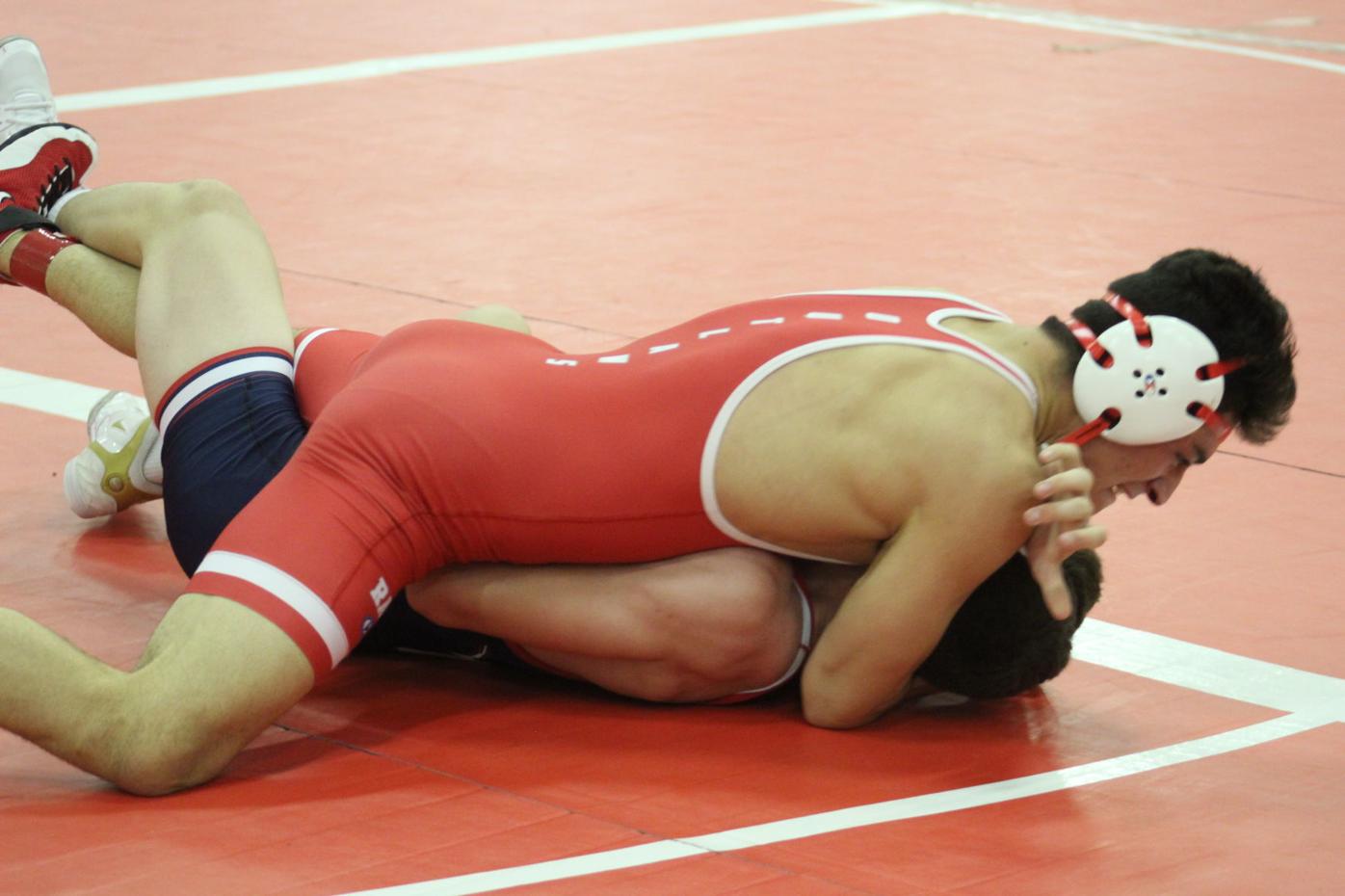 Rawlins High School junior Robert Flores works for a pin against an opponent on Friday in Vernal, UT. Flores secured the pin in the first period, to advance in the tournament.

Rawlins High School sophomore Carlos Javalera sinks a half-nelson on his opponent during Saturday’s action at the Uintah Tournament of Champions in Vernal, UT.

Rawlins High School junior Robert Flores works for a pin against an opponent on Friday in Vernal, UT. Flores secured the pin in the first period, to advance in the tournament.

VERNAL, Utah – High school wrestlers from Rawlins were busy competing on Friday and Saturday in Vernal, Utah. Rawlins Outlaws wrestlers made the journey across the state line for the prestigious Tournament of Champions hosted by Uintah High School.

For the Outlaws, the Tournament of Champions (ToC) was a test of how they stack up against some of the best competition in the region. There were 32 teams in attendance, from Wyoming, Utah and Colorado. While the varsity wrestlers on the Outlaws squad held their own against the competition, RHS didn’t bring home any medals from the varsity tournament. For Outlaws head coach Nate Lee, the weekend was merely another stepping stone to getting the RHS program where it needs to be.

“We’re not going to improve or change our expectations if we don’t leave the state and get in front of the best competition we can,” said Lee. “We took our lumps this weekend, but our guys are tough and will continue to work hard and overcome adversity.”

Even though they didn’t bring home any hardware, Lee is encouraged by what he saw from his wrestlers. On the varsity side, senior Kenny Raymond was just one small mistake out of the medal matches at 220 and sophomore 182 pounder Garrett Parker also lost a close bout that would have put him on the podium. Junior Robert Flores at 152 kept things interesting, as he usually does, and was able to pick up two good wins in the varsity tournament.

The Tournament of Champions is set up in a way to ensure teams get the most bang for their buck. If a wrestler in the varsity tournament loses out the first day, they can then enter the “second chance” tournament on day two and continue to compete. Flores, junior Juan Solis and Senior Levi Bezold all entered into the second-chance tournament and finished either first or second place. There is also a JV Tournament in place at the ToC and the Outlaws had a handful of wrestlers entered into it. Sophomore Carlos Javalera came away with a second place finish in the 170 bracket.

For the Outlaws, the weekend in Vernal was about getting plenty of matches and competing against different competition throughout the region.

On Thursday Jan. 16, the team headed north to Buffalo to face off against the Bison. Rawlins lost the dual 39-34. The team won six out of the 14 bouts with wins coming from Blayne Coleman, Toby Setzer, Josh Smith, Levi Bezold, Garrett Parker and Hayden Strong.

The Outlaws will finally be on their home mat on Jan. 24 as they host Burns in the only home dual of the season. The home dual against the Broncs will also be senior night.