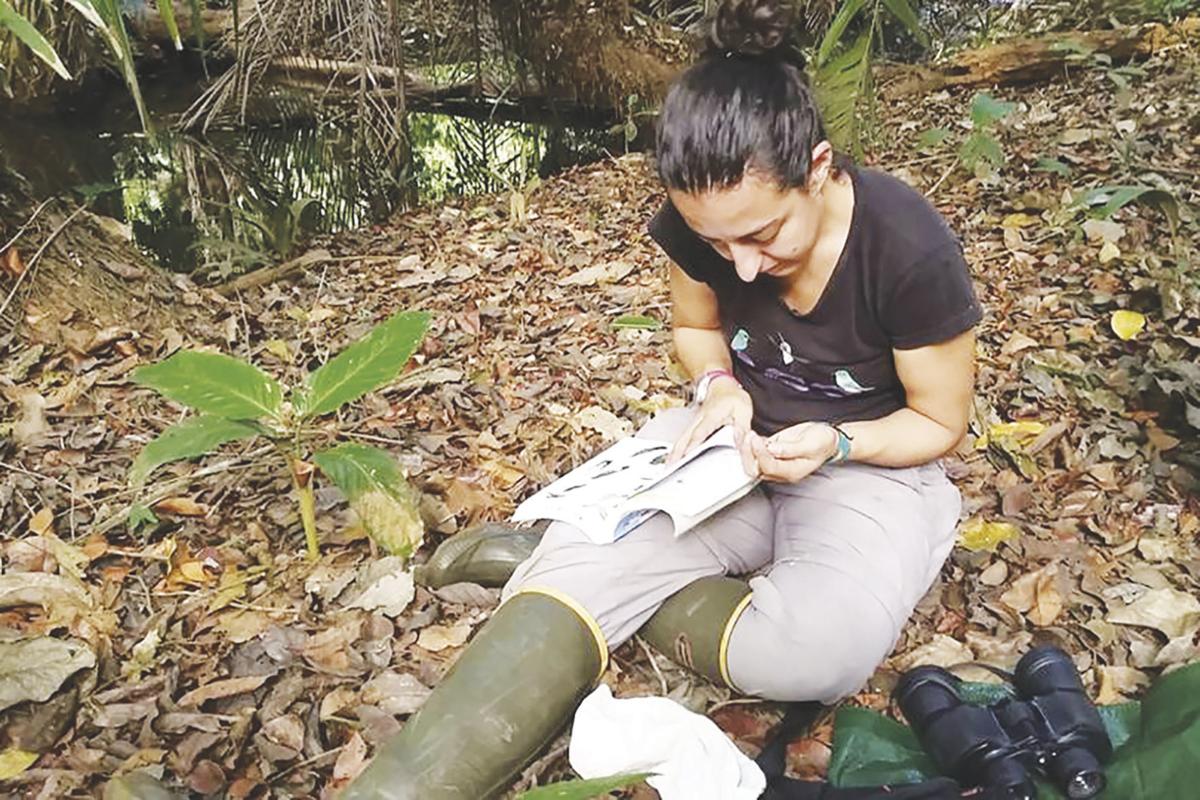 Laura Gomez-Murillo works in the field in Panama and holds a hummingbird that she captured using a mist net. Using a field guide, she verifies the species of hummingbird. Gomez-Murillo, a University of Wyoming master’s degree student from Colombia, received a Smithsonian Tropical Research Institute internship, which began Jan. 28. 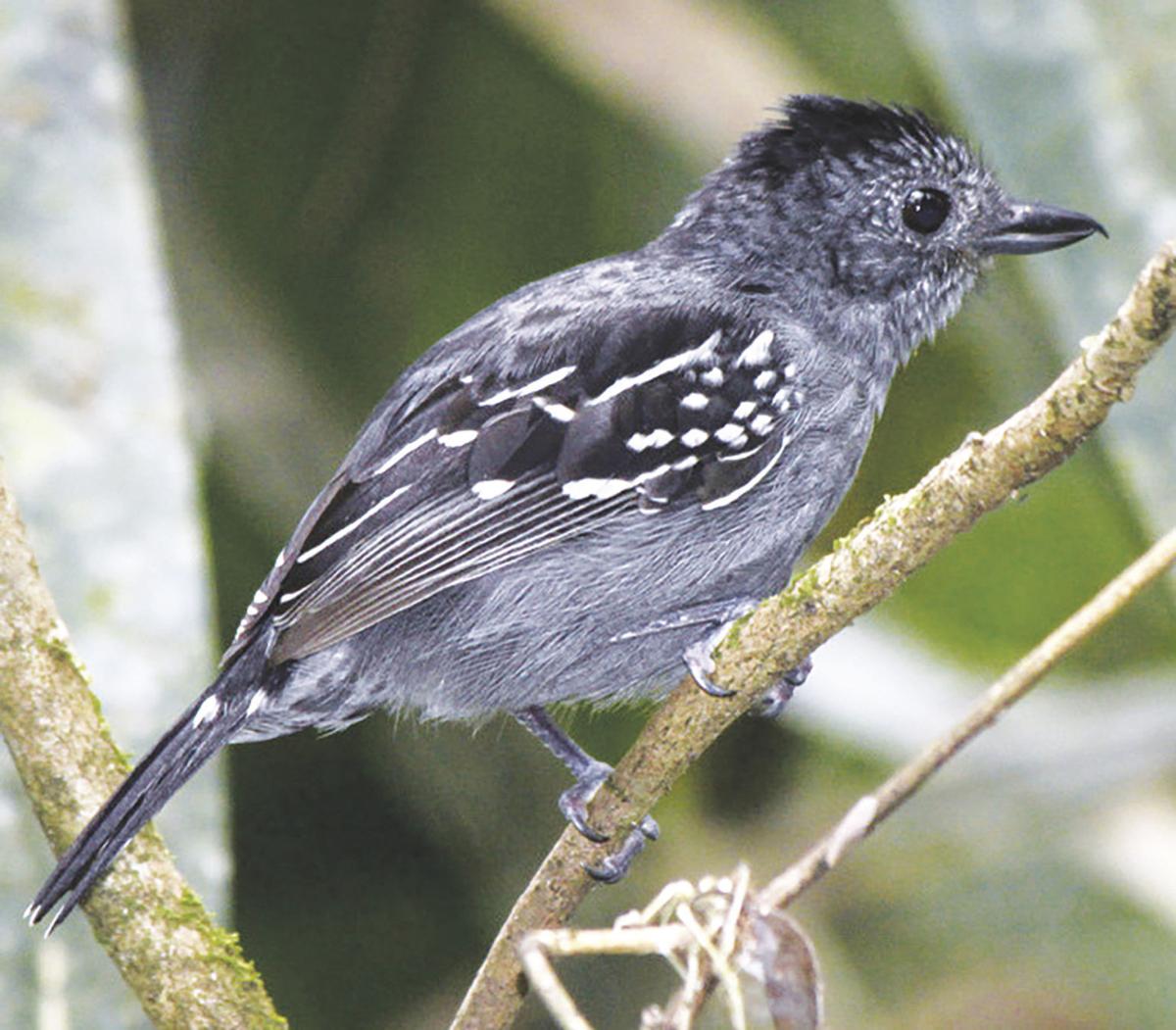 Laura Gomez-Murillo will study the black-crowned antshrike during her Smithsonian Tropical Research Institute internship, which will help her finish an ongoing project evaluating the role of the age and the competition in territorial aggression in this understory tropical bird.

Laura Gomez-Murillo works in the field in Panama and holds a hummingbird that she captured using a mist net. Using a field guide, she verifies the species of hummingbird. Gomez-Murillo, a University of Wyoming master’s degree student from Colombia, received a Smithsonian Tropical Research Institute internship, which began Jan. 28.

Laura Gomez-Murillo will study the black-crowned antshrike during her Smithsonian Tropical Research Institute internship, which will help her finish an ongoing project evaluating the role of the age and the competition in territorial aggression in this understory tropical bird.

LARAMIE — Laura Gomez-Murillo, a University of Wyoming master’s degree student from Colombia, began a research adventure in Panama on Jan. 28 by virtue of receiving a Smithsonian Tropical Research Institute internship.

Smithsonian Tropical Research Institute internships are for early master’s students or students who have not yet started graduate school. The purpose of these internships is for such students to work on short projects that can be completed within a three-month time frame and for the interns to gain skills that will increase their likelihood of success in graduate school.

“This fellowship is pretty important to me, because it will enable me to finish an ongoing project evaluating the role of the age and the competition in territorial aggression in an understory tropical bird (the black-crowned antshrike) that I started with two friends (Camilo Alfonso and Megan Pendred) as an independent project while we were part of Corey’s (Tarwater) project a couple of years ago,” Gomez-Murillo said in a press release. “It is a big deal for me, also, because it gives me the opportunity to be part of one of the biggest communities of tropical ecologists and interact with many other interns, graduate students and researchers who come to STRI from around the whole world each year to study a whole variety of subjects in ecology.”

Tarwater, a UW assistant professor in the Department of Zoology and Physiology, who received a Smithsonian Tropical Research Institute short-term fellowship when she was a graduate student, said Gomez-Murillo is her first student to be awarded this particular internship. Tarwater is Gomez-Murillo’s adviser for her master’s degree program and co-adviser for the Smithsonian Tropical Research Institute internship.

“Laura obtained the internship because she has a vast amount of experience in tropical ecology and because there is a high probability of her being able to complete and publish the proposed project,” Tarwater said in the release. “This will be highly valuable for her and help set her up for her own master’s research.”

Tarwater adds the project will give Gomez-Murillo experience in executing and completing a short experiment and in writing up a manuscript for publication.

“This project is looking at the joint effects of fragmentation and precipitation on tropical bird populations,” Tarwater said. “The objective of this research is to examine the intrinsic and extrinsic factors that influence variation in territorial aggression in the black-crowned antshrike.

“Territorial aggression is predicted to be an adaptive response to competitors, as it can increase access to food resources, breeding space and mates,” Tarwater said. “Nevertheless, aggression may come at a cost in terms of risk of injury or increased probability of predation. Therefore, individuals must balance the costs and benefits of territorial aggression, and this balance will depend upon both intrinsic and extrinsic factors.”

Gomez-Murillo will use the variation in bird density and age structure they have observed across the rainfall-fragmentation gradient to examine how conspecific density, age of territory holders and the age of intruders influence the costs and benefits of territorial aggression. She will conduct a playback experiment in which she uses simulated territorial intrusions of males of different ages in sites across the Isthmus of Panama that vary in intensity of competition.

In 2012, Gomez-Murillo received her bachelor’s degree in biology from Antioquia University in Medellin, Colombia, near where she is from. She published her undergraduate thesis on plant-pollinator interactions in two peer-reviewed journals, according to the release.

She has been a field technician or crew leader in the tropics for 10 years, including working with Tarwater since fall 2014 in Hawaii and Panama. She has been Tarwater’s crew leader in Panama since 2016 and has been instrumental in adding a new method of aging tropical birds to Tarwater’s long-term study of avian demography (population growth and survival) in Panama.

In addition to Panama, Gomez-Murillo has been part of different research projects studying birds in Peru, Colombia, Hawaii and Pennsylvania.

She says she has always been interested in nature, with an early dream of becoming a marine ecologist, according to the release.

“But, once in college, I had amazing professors who made me fall in love with the forest and the terrestrial ecology. From the plants to the insects, I enjoyed learning about interactions and life history traits,” she said. “I stuck with birds, probably because my country is the most diverse country in term of birds in the world (1,900-plus species). They are one of the easy models to answer many questions in ecology, and nothing is cooler than to work with modern dinosaurs.”

Gomez-Murillo says she has enjoyed working with Tarwater, and she expects the internship project will provide more clues about how bird fragmentation can affect competition and how the age of the intruders may influence the territorial aggression by the territory holders.

“The internship is for three months and I hope, at the end of that time, I have all the recordings and experiments that I need to start with the data analysis and the writing, another process that I am excited to do because, although I have worked collecting data in the field for a lot of years, it is different to have the opportunity to write your own research,” Gomez-Murillo said.

After the internship, Gomez-Murillo plans to stay another couple of months in Panama to collect data for her master’s project. She will try to analyze how fragmentation and climate change can affect the molt patterns, molt timing and the quality of the feathers of understory birds.

Thank you! You've reported this item as a violation of our terms of use.

Error! There was a problem with reporting this article.

This content was contributed by a user of the site. If you believe this content may be in violation of the terms of use, you may report it.